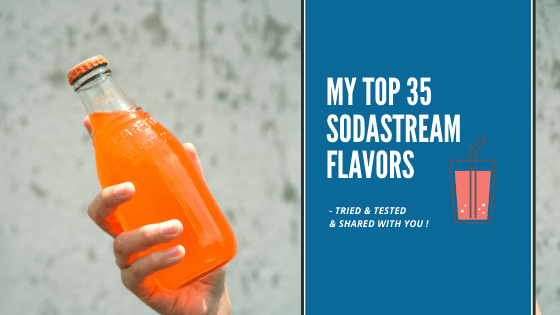 Everyone has a favorite soda flavor, but every now and again it’s fun to experiment and try something new.

But just like regular colas, SodaStream flavors are numerous and varied.

It’s almost impossible to try them all to determine if they’re worth your time and money.  However, I have tried and tested these and will share my views with you.

I also have the 35 flavors listed at the bottom of this post for ease.

So what are the 35 best SodaStream flavors you must try in 2022?

Check out our recommendation here

I tried out a bunch of the most important flavors to bring you my favorites and several for specific kinds of soda drinkers. They range from across all types of sodas and flavor profiles.

Some of the best flavors are remakes of classic soda pop beverages that you can buy from the store.

Others are clever twists on old ideas, featuring new flavor mixes that still remind you of the soda that inspired their creation.

Then there are more unique flavors, like types of ginger ale or lemonade.

These allow you to experience those excellent flavors but carbonated just like your favorite soda.

No matter what kind of soft drinks you prefer or what types of flavors you enjoy, there are multiple excellent choices available.

In fact, this variety is particularly excellent since it will get you doing more with your SodaStream than simply making sparkling water!

Having some more interesting and novel flavors available allows you to experiment and have a little fun, and maybe even a little bit of childhood nostalgia (well for me anyway).

We’ll begin with the most traditional flavors that lots of new SodaStream users will want to check out. The classic, of course, is the   Cola   flavor.

Even though it doesn’t have the proprietary Coca-Cola formula, it’s still fairly similar in overall taste and you can definitely detect caramel in each sip. It’s fully flavored and has a sweet bite to the taste that brings it closer to Pepsi’s flavor overall.

It’s best described as a cross between the two main soda titans, so it might be a perfect choice for those who don’t have a big preference for Coke or Pepsi.

Dr. Pepper? What about Dr. Pete? You might have already guessed where these flavors got their inspiration.

There are two main types of cream sodas sold for use with SodaStream machines. These are   Cream Soda and Diet Cream Soda.

The first of these is very reminiscent of the classic vanilla cream soda you can find in supermarkets in bygone decades. It’s almost sickeningly sweet and it smells just like candy. While the syrup appears to be really dark (almost a Coca-Cola color), it’s actually quite light on the tongue and feels both buttery and caramelly.

It’s an  ideal soda flavor  for combining with vanilla ice cream and other cold sweet treats. Kids are usually the biggest fans of these types of soda flavors, but adults wanting a blast back to their younger years might want to give this a sip, as well.

The diet variant of the cream soda flavor isn’t nearly as rich in sugar or taste as its predecessor, but it’s still worthwhile if you want to watch your waistline.

It still tastes pretty close to the classic cream soda flavor even though the Splenda-inspired tingle marks it as a clear diet syrup.

SodaStream also produces several energy drink flavors that are reminiscent of the caffeine-laced beverages you can get in supermarket checkout aisles all across the country. In addition to their unique flavor profiles, each of these contains 80 mg of caffeine per 8-ounce serving, so keep this in mind when fixing up your own carbonated beverages.

Each of them can deliver quite a wake-up call to your body!

Finally, there’s   Energy Mango.  This flavor combines the standard energy flavor from the first syrup with a big mango blast. I was very pleased to discover that the mango notes totally covered up the metallic aftertaste that you can detect and most of the other syrup variants.

This bumps it up to one of our favorite flavors from the Energy Drink flavor category.

SodaStream also puts out a huge variety of fruity soda flavors. I’ve got plenty of favorites to tell you about.

Of course, no soda flavor collection would be complete with Lemon-Lime. Fans of Sprite and similar sodas will really appreciate this syrup. It doesn’t have any negative aftertaste and is instead dominated by a light and bright lemon flavor that’s equally refreshing and invigorating.

Don’t forget to check out the SodaStream ginger ale offerings.

Their standard   Organic Ginger Ale flavor  is the best of the bunch. It has a light ginger and citrus flavor profile that doesn’t rest heavily on the tongue. In fact, its mild flavor and pleasant weight make this syrup a contender for one of the better ginger ale purchases you can make even when considering store-bought bottles. I’d easily recommend this syrup for ginger ale enthusiasts.

SodaStream makes a few tonic flavors for those looking for a more unique soda experience.

Be sure to try out

Check out these tea sodas for a sparkling herbal beverage.

My favorite is   Sparkling Natural Green Tea  . It’s plenty sweet and has a little citrus flavor, too. It’s not quite as herbal as warm traditionally-steeped tea, but it’s good enough to remind the tongue of iced green tea.

Peach Iced Tea is another solid choice. The peach tea flavor is suitably sharp and fruity, but it doesn’t become too heavy on the top and it doesn’t overwhelm the palate.

The Root Beer standard flavor has plenty of vanilla to rival A&W’s formula. It’s not as spicy as other root beer variants but it’s quite tasty and super refreshing on a hot day. There’s a diet variant, too, although it’s a little too sweet and is closer to cream soda than real root beer.

Sparkling Natural Root Beer  is another excellent choice, as it has a little more bitterness to its flavor profile that makes you think less of cream soda and more of the real deal.

Where Can I Buy SodaStream flavors?

I recommend these bundled varieties on Amazon. Near the bottom of the page.

I hope you found some value in this post.

And be sure to pick up your Syrup Flavorings here – they have the BEST Selection.

If you did then please do share and come back for updates!