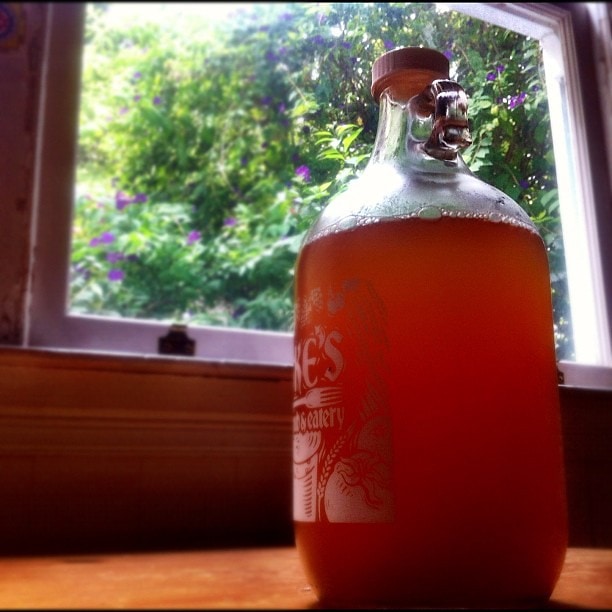 Kombucha has been around for generations, and it usually sports a natural fizziness to it that adds to its widespread appeal.

But this natural carbonation isn’t as exciting as that of soda, so it’s only natural that people began to wonder if their SodaStream machines could add some extra pop to their kombucha brews.

So can you use SodaStream to carbonate kombucha?

You absolutely can, and there are a few different ways to do it. You can add an artificial syrup to regular sparkling water and emulate the way you’d make a regular soda beverage.

Or you can add concentrated homegrown kombucha to a bottle of sparkling water and mix the two thoroughly.

Alternatively, you can always try to carbonate the kombucha directly, although you run into the same possible problems as trying to re-carbonate flat soda.

You’ll likely make a big mess and the kombucha elements may clog your soda maker machine. However, it’s possible to do this so long as you’re prepared to clean up an overflow.

Overall, there is a multitude of options to carbonate your kombucha with a SodaStream. The ideal method is totally up to you.

How the SodaStream Carbonates Kombucha

Your SodaStream can carbonate kombucha the same way it carbonates everything else: by starting with regular, cold sparkling water.

You might already know that this soda maker carbonates its beverages by forcing CO2 – carbon dioxide – into a designated SodaStream bottle of cold filtered or tap water. It’s imperative that the water be both cold and without flavor since the carbonation process typically causes a lot of the water to bubble up and over the dispenser tip of the soda maker.

Once you have your sparkling water, your SodaStream’s part of this process is done. Now it’s time to focus on the kombucha itself.

Kombucha is a type of fermented tea, made from developing cultures of both bacteria and yeast.

This combination usually forms a type of mushroom-shaped texture toward the top half of the liquid in any given container. While this may look odd, the mushroom part of a glass of kombucha is safe, though it shouldn’t be consumed.

These bacteria and yeast are what help give kombucha its healthy side effects.

So how can you add kombucha to sparkling water?

There are two options. For starters, you can look for kombucha syrups in online markets. Kombucha syrup is starting to become more popular than in previous years, so your odds of finding a flavored syrup just like your favorite kombucha drinks are higher than before.

This syrup is added to your sparkling water, so you make it just the same as you’d make any other carbonated beverage with your SodaStream.

The second option is to brew a very concentrated batch of kombucha beforehand.

This ultra-concentrated batch should then be thoroughly mixed with your sparkling water the same way you would a syrup or additive.

In this way, you can mix the kombucha flavor as normally as possible without actually adding a syrup. This is more difficult to do since concentrating the kombucha to such a degree requires a lot of prep time and some experience in brewing kombucha in the first place.

Because of these aspects, finding a kombucha syrup is usually the way to go.

However, some kombucha syrups don’t have all the health benefits or nutritional components of the regular stuff.

If you’re interested in drinking sparkling kombucha as close to natural as ever, be sure to check out the ingredients and nutritional information on any artificial syrup before finalizing a purchase.

You can also try to carbonate the kombucha directly. In this case, you’d make your batch of kombucha first, wait until the bacteria have been settled, then add carbonation. Be aware that this is likely to make a much bigger mess than you might anticipate, so you’ll need to have cleanup supplies standing by.

You should also be careful not to overfill the bottle.

There needs to be a little space at the top, so don’t fill it to the brim and try adding carbonation.

Adding carbonation shouldn’t change the bacterial benefits or look of the drink too much. It will only affect the texture and flavor. Any carbonation naturally adds a bit of an acidic or salty taste to any drink.

Should Kombucha be Carbonated? 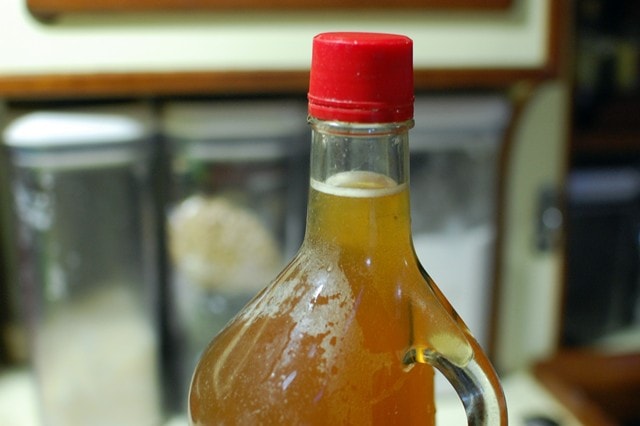 People have been drinking kombucha carbonated for quite some time. This is because kombucha naturally becomes slightly fizzy as a result of its bacterial processes.

As the yeast in your culture consumes the sugar in the tea, it also creates the byproducts CO2 and alcohol. This is also what causes kombucha to be very lightly alcoholic. This natural fermentation process doesn’t create as much carbonation as a SodaStream, but it’s still enough to be noticeable.

So kombucha is practically always carbonated. The only difference is in how much. Natural carbonation isn’t like the kind you’ll see at the local soda fountain.

It’s much weaker and softer and likely won’t taste the same if you’re expecting the same level of carbonation as you’d get from a can of Coca-Cola.

You can always increase your carbonation in a few different ways. For one, you can make the first of two fermentation periods longer.

The longer the yeast ferments, the stronger the tea and the more CO2 that will be naturally produced by the process.

You can also fill your kombucha closer to the top of your sealed bottles during a second fermentation stage.

This will eliminate extra space for oxygen, requiring more of the CO2 present to be dissolved into the kombucha liquid. You can also add more sugar to a given brew of kombucha. This gives the yeast more fuel to work with, and it will create more CO2 as a result.

Be aware that this will also increase the alcoholic content of that batch of kombucha.

Finally, be sure not to put the kombucha in the fridge if you want it to carbonate naturally. Room temperature kombucha is the kind that ferments, but if you chill it the process stops. Only artificial carbonation should be undertaken with a cold liquid.

Natural vs. Forced Carbonation with SodaStream

What’s the difference between natural or forced carbonation?

There isn’t too much of one. Both types of carbonation change the texture and flavor of your kombucha to a mild degree. It won’t mess with the bacterial cultures and thus won’t change the health benefits, either. Even though the flavor will change slightly, it’ll still taste like the brew you intended.

These artificial bubbles are large enough that they don’t usually mix and will foam more quickly. They pop, expand, and develop more rapidly and aggressively than not.

This also translates slightly into a taste difference. Artificial carbonation produces a harder, sharper taste of carbonic acid. Meanwhile, naturally-carbonated kombucha will taste softer and soapier in texture (though it won’t taste like soap!).

It’s best described as a more of a “burn” versus a “tickle” taste and texture.

This is because kombucha which has natural carbonation has softer and smaller bubbles.

These bubbles arose naturally from yeast byproducts and don’t have the strength or vigor of artificial carbonation bubbles. You can tell the difference from the look, as well; softer bubbles will mix together and spread throughout the glass, foaming more gently.

If you ever open a bottle of natural vs. artificial kombucha, you’ll notice that artificial bottles have overflows that spread rapidly outside the bottle, while natural bottles have bubbles that almost lazily spill over the top.

Regardless of which kind your brew has, it’ll be pleasant and enjoyable. Which is superior basically boils down to preference. 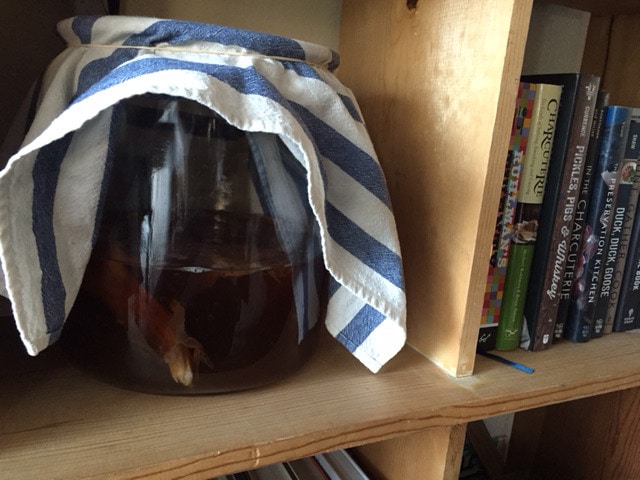 Kombucha is definitely still good even if it’s flat. The carbonation has no impact on the health benefits of a brew of kombucha. Even with natural carbonation, the CO2 is a side effect rather than a target benefit that people drink kombucha specifically for.

The carbonation just adds a fun texture and taste to those who enjoy sodas or other carbonated beverages. Carbonic acid added to kombucha doesn’t change the nutritional components.

Flat kombucha certainly tastes different from the carbonated stuff, although it’s closer to the naturally fizzy kind than the artificially carbonated. You might have to try out both types to see if you prefer one flavor over the other.

The widespread opinion suggests that regular kombucha is just as good as carbonated.

Some people may dislike adding carbonation to their kombucha since it upsets their stomachs.

Kombucha naturally has a high number of acids and other biological elements in a given beverage simply due to how it’s brewed. First-time drinkers of kombucha might find that sipping the tea without lots of carbonation is superior while they get used to the taste and the other effects.