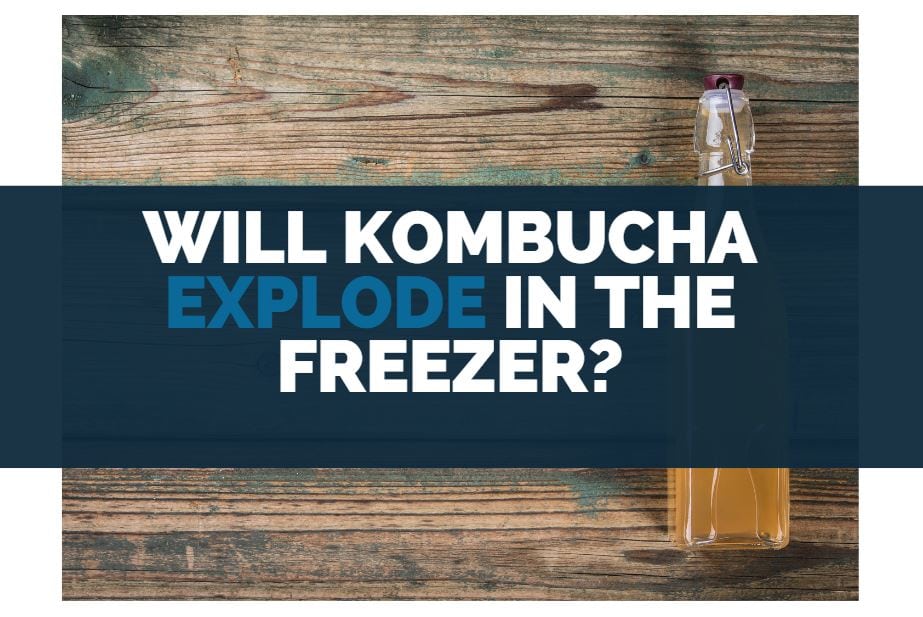 Kombucha is becoming a very popular drink, one which can help promote good digestion.

As a result, more people are experimenting with making it themselves. This has led to a lot of people asking how to safely store this drink.

So, will Kombucha explode in the freezer?

There is a risk that kombucha will explode if left at room temperature. This can be prevented by opening to bottle from time to time to release the gas that has built up. You might also want to make sure that you are keeping the bottle cool.

However, if you are storing it in the freezer, the risks of it exploding are very low.

There have been multiple cases where a kombucha bottle has exploded due to improper storage which can be a potentially dangerous situation, as you might get impacted by a flying glass shard.

To make sure that you’re safe you’ll need to know how to store kombucha properly.  So stick with me here

How to Freeze Kombucha? 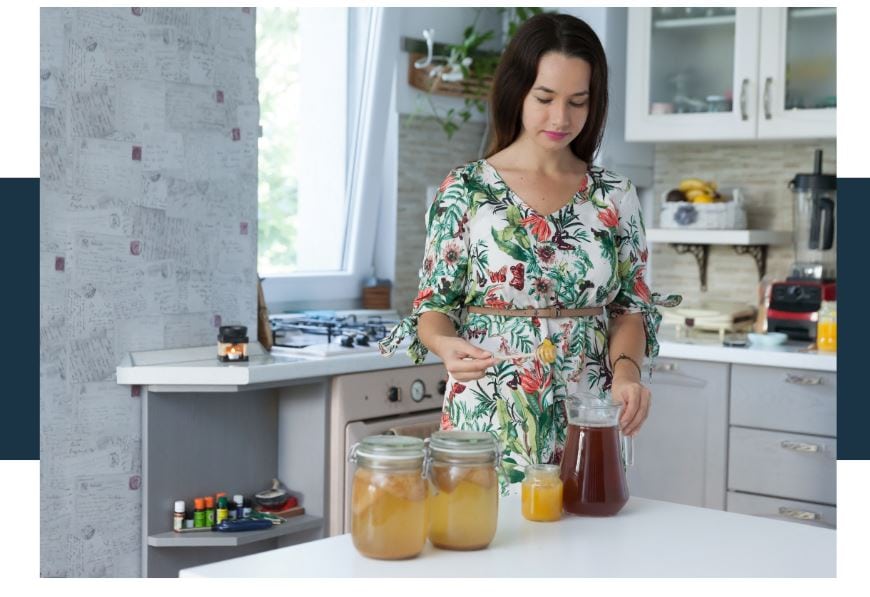 You want to try and freeze kombucha as quickly as possible.

To do this, you’ll want to pour the beverage into a plastic bag. Then, put this into a bowl that has been filled with ice.

This should chill the drink rapidly. Once cold, pour into a mason jar and store in the freezer.

One of the biggest reasons why people choose to drink kombucha is because of the health effects, which are gained from the probiotics.

However, if you simply stick the bottle in the freezer, you will be killing the bacteria and removing the health benefits.

Instead, you’ll need to make sure that you are freezing the kombucha rapidly.

To do this, you’ll need to pour the kombucha into a plastic bag. As you’re doing this, you want to try to avoid using any metal implements.

Once in the bag, you’ll need to transfer the bag to a bowl filled with ice.

Before you do this, add some salt to the ice, this will make the bowl even colder, so the kombucha freezes faster.

In most cases, it will just take a few minutes before the kombucha is chilled. After this is done, you’ll be able to transfer it to a mason jar and put it into the freezer.

Make sure that the freezer is set at a low temperature, ideally around 0 degrees Celsius.

This process will work for both homemade and store-bought kombucha.

Kombucha doesn’t have an expiry date and will always be safe to drink, as long as you store it properly. However, to get the best flavors and health effects, it’s recommended that you only freeze kombucha for a few weeks.

How to Defrost Frozen Kombucha?

When you’re ready to drink the kombucha, you’ll need to defrost it.

You’ll need to transfer it from the freezer to the fridge. This will cause the drink to start to defrost while keeping the probiotics alive.

After you’ve frozen the kombucha, you’ll need to make sure that you need to defrost it before you can drink it.

As a result, you’ll need to transfer it from the freezer to the fridge.

This will cause it to start melting. After a few hours, it should be liquid, allowing you to drink the beverage. By using this technique, you can ensure that the probiotics will be able to survive the process.

You should only defrost a kombucha when you’re ready to drink it.

Once in the fridge, it will have a shorter lifespan.

Often it will start to lose its flavor within one to two weeks. You should also make sure that you don’t re-freeze the kombucha.

This will kill the probiotics, causing the beverage to lose its health benefits. Re-freezing the kombucha will also impact its taste, producing a bland drink.

How to Store Kombucha

When you get kombucha, you’ll need to make sure that you are storing it in the fridge or freezer. Leaving it on the pantry bench might increase the risk that the bottle will explode as it may continue bubbling and fermenting.

You should also avoid shaking the bottle or storing it on its side.

In this case, you’ll either need to put it in the freezer or the fridge. If you purchased the kombucha at the store, you might want to put it into a cooler bag for the journey home. If it gets too hot, the probiotics might be killed.

It’s best to avoid using a plastic or metal container.

As we explained earlier, metal might kill the probiotics, removing the health benefits of kombucha.

Plastic containers have chemicals that can leach into the drink. This can produce an unpleasant taste.

However, it will start to lose its flavor. Because of this, it’s often best to drink it within six weeks of brewing or buying it.

If it tastes bitter, like vinegar, it’s gone off.

While you won’t get sick, it will be an unpleasant drinking experience.

How Can You Stop Kombucha Exploding?

Kombucha bottles explode because the bacteria have caused a build-up of CO2, which the bottle can no longer contain.

To prevent this, you’ll need to keep it refrigerated. If you want to perform a second fermentation, you should remove the top of the bottle every day, to let the CO2 out.

There are a few ways that you’ll be able to prevent this from happening.

First, you’ll want to keep it cool. If you leave it at room temperature, the bacteria will continue to grow.

This means that they are producing CO2.

Eventually, this will build up too much. When this happens, the pressure inside the bottle causes it to explode.

It’s also important to make sure that you aren’t shaking up the bottle. This causes it to fizz, releasing more CO2, and increasing the risk of an explosion.

It’s best to avoid storing the bottle on its side. This might cause the glass to crack, making the kombucha leak out.

Some people might want to perform a second fermentation. This can allow you to get a stronger flavor.

However, it will also mean leaving it out at room temperature for a few days.

To make sure that the bottle doesn’t explode, you’ll need to remove the lid once a day. This will allow the CO2 gas to escape.

Can I drink kombucha warm?

You can drink kombucha both warm and chilled.

Some people like warm kombucha because it’s not as sweet. Others like the stronger flavors of chilled kombucha.

It’s best to try both methods, to find the one that you prefer the most.

What to do if kombucha gets warm?

If the bottle has been sitting at room temperature for a while, you might want to put it in the fridge.

This will cool it down, reducing the risk that it will explode. When you’re ready to open it, do it over a bowl. The kombucha will tend to fizz up.

Kombucha is a healthy drink, which is loved by people around the world.

However, it’s important to make sure that you’re storing it properly. As long as you keep the bottle in the fridge or freezer, there is little risk that it will explode.

However, when left at room temperature, the CO2 gases will build up. If the pressure in the bottle becomes too great, it could explode.