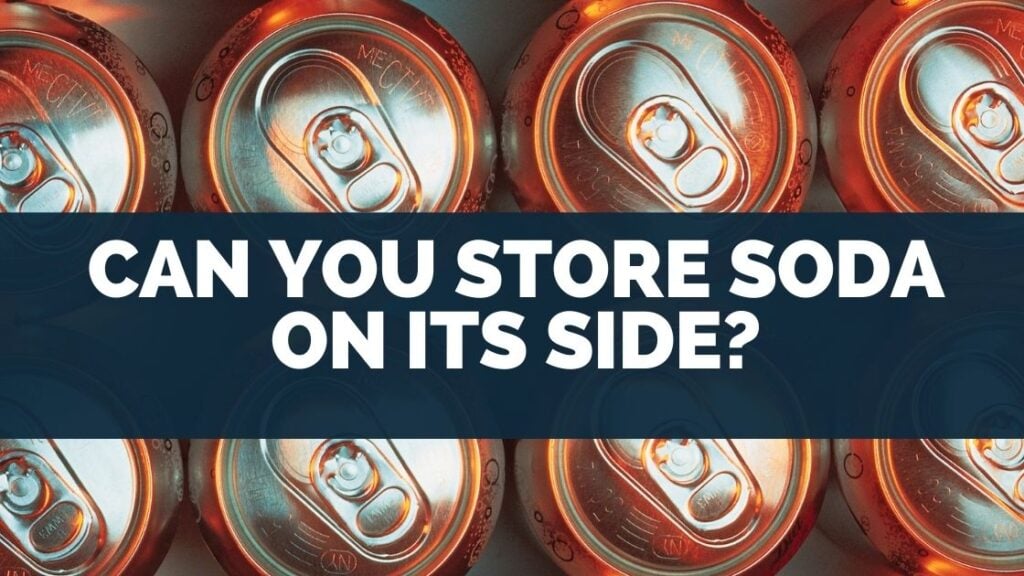 Wasted space, flat soda, and lack of storage space are just some of the small things that grind my gears and I’m positive I’m not the only one. Sometimes a cold refreshing soda or carbonated beverage genuinely hits the spot.
There’s nothing worse than opening a flat soda when you’re craving a bit of fizz.


If the bottle of soda is not open, you can store carbonated beverages on its side without a higher risk of losing fizziness or going bad.

There is no greater or lesser risk of the soda losing its fizz if stored on its side or upright.

Soda will not go off faster if stored on its side.

If you dislike flat soda as much as I do, it’s the way the soda is stored when it’s opened that you need to be conscious of.
The trick is to keep as much air out of the bottle as possible.

There is a bit of science involved in how the fizz gets into your fizzy drinks and how to keep the bubbles bubbling.

Read on to have many of your common soda questions answered.

Can You Store Soda Outside? 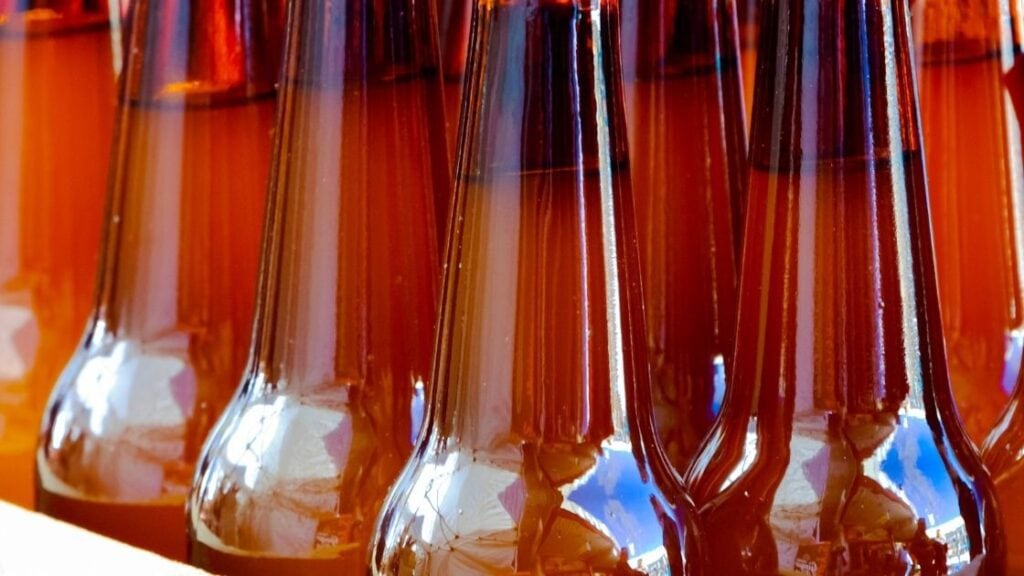 Depending on the temperature of the area you live in, you may want to avoid storing soda outside of the house.
Some beverages can lose their taste over time if not stored correctly. Whether it’s stored on its side or upright is not the issue.
The elements are what you need to consider.  Here are some things that can affect your soda when stored outside:

For a sealed bottle of soda, the effect of high temperatures altering your soda is much less than if opened.  The solubility of gasses like carbon dioxide bubbles is reduced when exposed to higher temperatures.
Solubility is the ability of a chemical substance to dissolve in a liquid.

High temperatures trap the gas at the top of the bottle and the CO2 doesn’t dissolve in the liquid.
Without the gas dissolving in the liquid, you’ll have flat soda.

Sunlight will affect the temperature of the soda but can also result in discoloration of the soda. Sunlight acts as a type of bleach to your colored beverages so it doesn’t look very appealing any longer and looks diluted.

Depending on the quality of the bottles of soda, carbon dioxide may leak from the pores of the plastic bottle.
This is caused by the combination of direct sunlight and heat. The upright position is not the issue to leak gas. Make sure that The soda bottle does not keep in under heavy objects.

Rust may not affect the inside of the can, but if cans are stored outside in the elements, you risk getting rust on the cans.
Obviously, for health reasons, avoid consuming rust.

What’s the Best Way to Store my Soda? 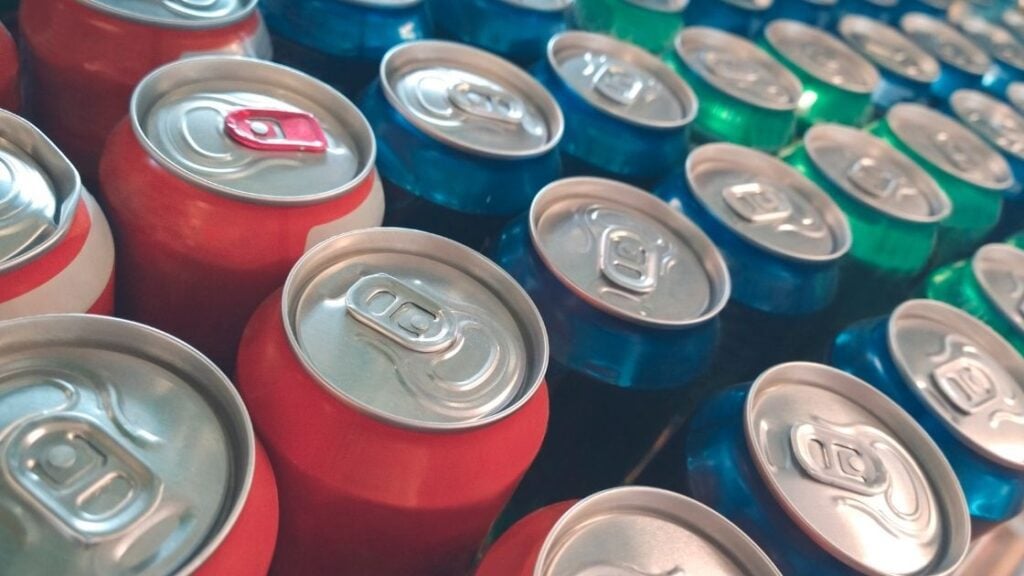 With all the above in mind of what not to do when it comes to storing your soda, here’s what you can do for the best results: Keep it cool in an upright position to keep the dissolved gas in the liquid.
The lower temperatures help to enhance the taste.

Store in steady temperatures. Try to store where the temperature won’t fluctuate.

Store in a dark place to avoid sunlight damage to the liquid.

Once opened, seal the cap tightly asap and store it in the refrigerator for better results but in a good or cool type of refrigerator.

This might sound strange and it doesn’t look that nice for storage as well is not the best storage space solution.
But once you’ve opened your bottle, before putting it in the refrigerator, squeeze as much air out as possible then seal shut.

This is to try and keep the CO2 in and the air out. Storing in the pantry is fine if unopened, at a room temperature of around 68°F (20°C).

How To Keep Soda From Going Flat? 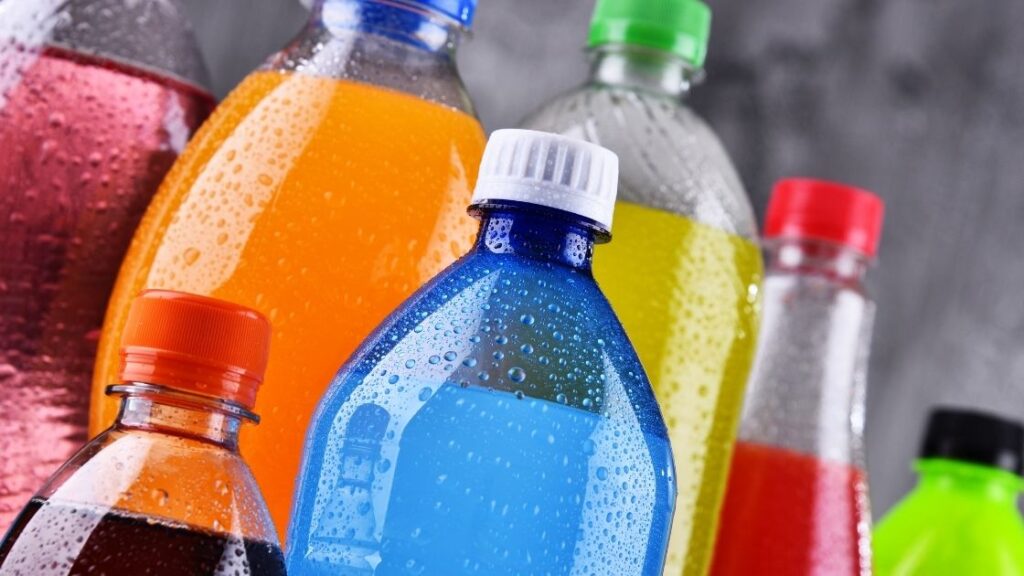 If you’re researching the questions on the internet, you’ll find a lot of science chat.

There’s nothing wrong with a bit of science chat but it usually results in having to look up more than you originally intended to get more answers you never knew you needed.

I’m going to do you a favor and help with some quick and easy science behind what makes fizzy drinks fizz and how the fizz goes flat and carbon dioxide dissolution occurs.

How is Soda Made?

Simply put, soda is made by adding carbonated water to the syrup ingredients of the soda.

What is Carbonated Water?

Carbonated water is what you get when you add the formula of Carbon Dioxide Gas (CO2) to normal water.

The chemical reaction of adding these together makes the safe to drink bubbles in your favorite fizzy drinks.

The water and CO2 are forced into bottles and cans at high pressures and sealed shut to keep the bubbles in.

When sitting still on the shelf you can’t see the bubbles. Because the CO2 is sealed in so tight, the bubbles can’t escape and your fizz is trapped inside where it won’t go flat until opened.

And Then When It’s Opened?

Once you’ve opened your soda can or bottle and released the pressure, the CO2 is released from the solution or captivity. This is where the bubbles come from.

It’s the Carbon Dioxide Gas getting out of the liquid, out of the bottle of calorie-free sweeteners, and escaping into the air.

Now that the drink has been opened and the carbon dioxide is escaping or evaporating, you have a limited time before the soda goes flat.

That’s what the hissing sound is too.

That little bit of space between the liquid and the bottle cap is pure Carbon Dioxide Gas. 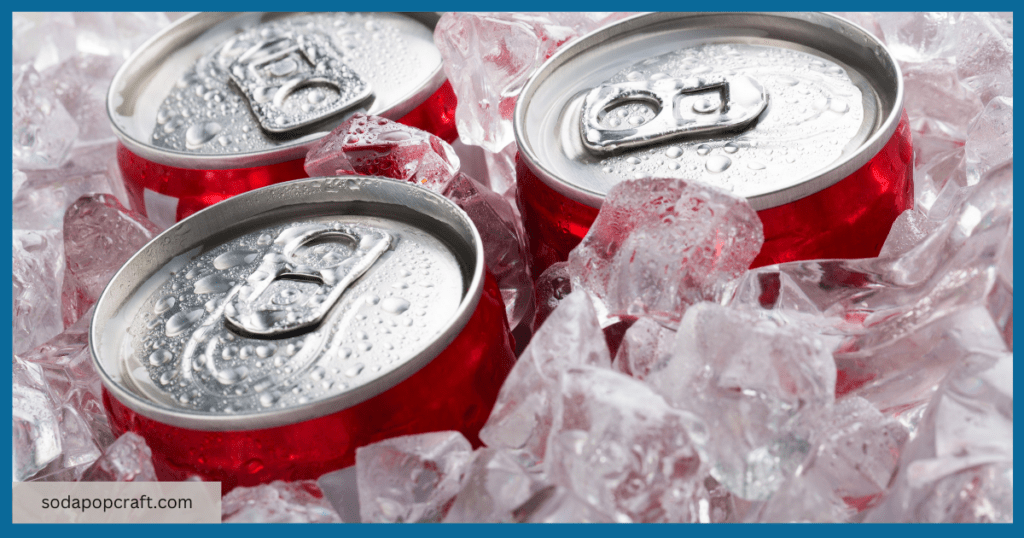 How to store soda cans?

For maximum storage, soda cans can be stored upright in their packaging. If the bottle of soda is unopened, you can keep carbonated beverages on their sides without increasing the danger of fizziness loss or spoilage.

I recommend storing soda cans upside down for a longer time.

Does Stirring Soda Make it Flat? 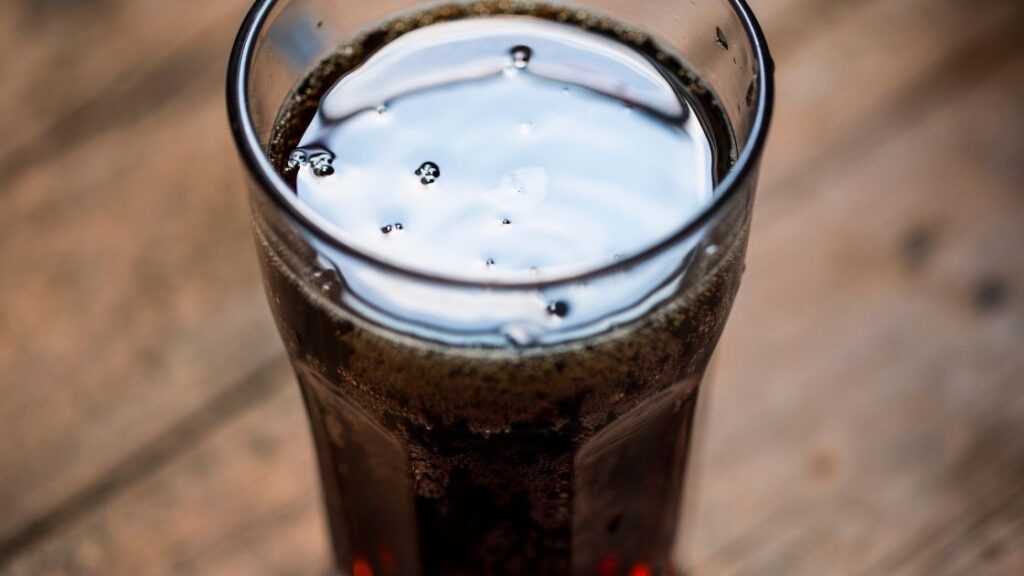 When you shake or stir the soda, you’re essentially helping the carbon dioxide to escape just as described in the above process.

So yes, stirring soda will make it go flat pop much quicker than if left alone once opened and poured.

Any bubbles caused by shaking or stirring are bubbles (Carbon Dioxide) trying to get out of the bottle.

The bubbles are their way of escaping and when you handle the soda carelessly, you’re helping your soda to flatten quicker.
Try not to shake, stir or pour your soda negligently to make the fizz last longer.

Which Soda Goes Flat the Fastest? 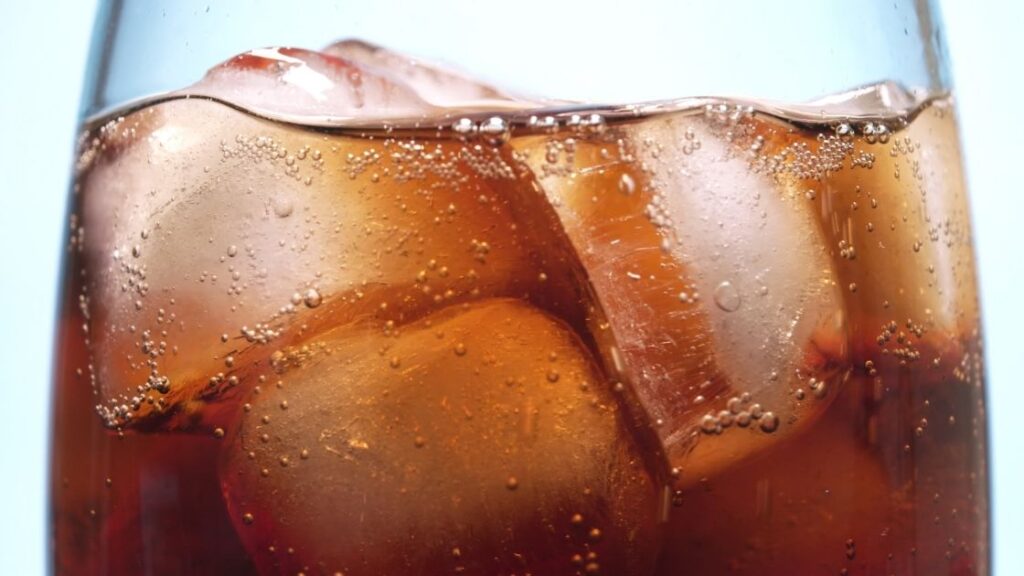 In short, any warmer soft drinks will go flat faster than cold ones.

Sodas are best consumed when cold and within 2-3 days of opening for the best taste and fizzy results.

The shelf life for diet sodas is 3 months and for regular sodas 9 months.
Sodas are apparently fine to drink if 6-9 months passed their shelf-life date.

This includes but is not limited to:

There’s a little rule used to determine what can and can’t be drunk after a certain time has passed.  If the soda contains normal sugar, it should be okay to drink up to 9 months after its use-by date.

Those with artificial sweeteners should be consumed within 4 months of their use by a shelf-life date.

How to Store Soda? 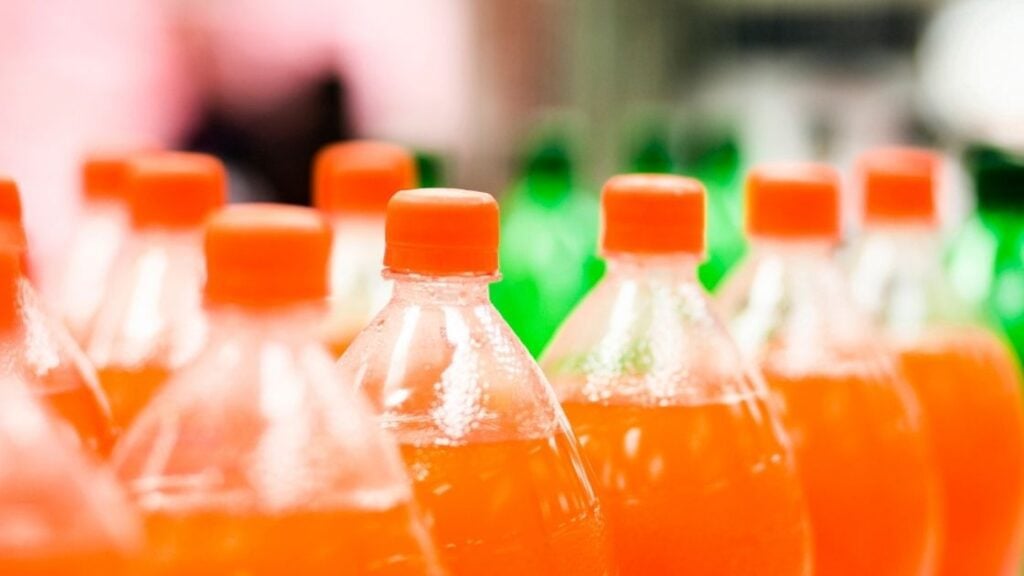 In conclusion, if your soda bottle is unopened, you can store it on its side, upright or upside down and it won’t affect the fizziness of your drink. Furthermore, storing soda upside down is not a problem if it is unopened.

Once opened, however, the way you store your drink will matter if you don’t want to lose those bubbles.

Room temperature, in a dark place, inside your pantry, or in the refrigerator is your best storage option.