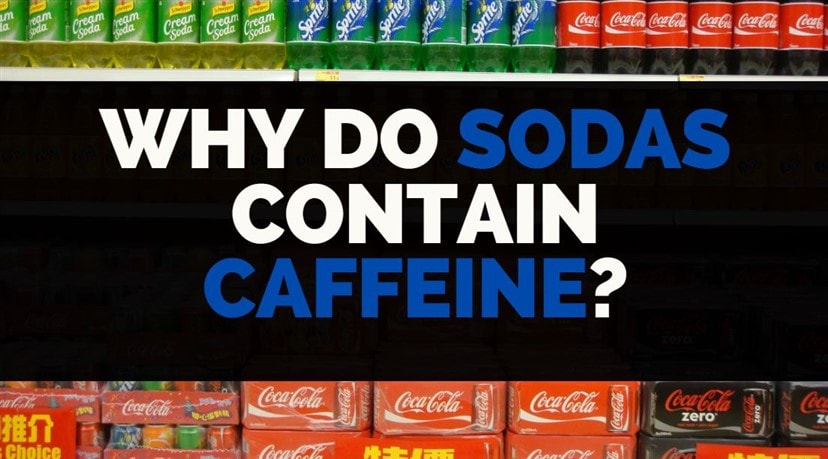 Most popular sodas such as Coke, Mountain Dew, and Pepsi contain a certain amount of caffeine.

Naturally the sweet, sparkling water contains sugar which is energizing, but why do sodas contain caffeine?

In this article we will answer the question in detail.

Caffeine is found in coffee, tea, and soda and is used as a pick-me-up throughout the day or in the morning.

Soda did at one point naturally contain caffeine, but in modern times it is not made from the same energizing plants, so why does it still have caffeine?

The short answer to the question is due to the increased demand for energizing drinks of all kinds in our society. Especially in our fast-paced world, a lot of people could use a pick-me-up either in the morning or throughout the day and this added stimulant makes the soft drink craved more.

Caffeine is a stimulant that is naturally derived and can be found in many drinks such as teas, coffees, and soda.  Stick with me as i explain this further;

Drinking caffeinated drinks such as tea and coffee is culturally significant.

Although caffeine is not naturally derived from any of the plants that are used in the production of the best-selling sodas on the US market.

Many companies add caffeine to their sodas because people enjoy the effects of it.

Here are 5 reasons why they add caffeine

What is Caffeine & how much is in my Soda?

Caffeine is a type of stimulant that is naturally derived and is found in beverages such as coffee or energy drinks.

If you are wondering how much caffeine is in a specific drink, you should look at the label because online resources may not be up to date and companies may change the amount.

There is usually less than 50 mg of caffeine in a soda, which is about half of that of a cup of coffee, but that number can vary.

Caffeine as a stimulant is natural and safe which is why many adults drink caffeine as a part of their daily routine or when they need to stay up for work or a road trip.

There is caffeine in many different drinks such as teas, coffee, and soda.

The caffeine in tea and coffee is naturally derived from the energizing plants, but what about soda?
Go to top

Does soda naturally have caffeine?

At one point, caffeine used to be a natural ingredient in soda.

In modern times, caffeine is added to most sodas and is not naturally derived from the plants that are used in production.

In the past, soda manufacturers like Coca Cola would use kola nut and in some cases extract coca plant in the manufacturing of their sodas.

Why is this so shocking to most people?

Because people were so used to the energizing effects of a bottle of soda from the coca plants, when food regulations changed they had to find another way to replace the caffeine in soda to continue to provide the public with the drinks that they love.

It may sound like an urban legend, but it is in fact true that companies used to use the main compound in Coca Leaves in the production of their sodas as well.

The coca plant contains energizing compounds that are a stimulant.

Of course, even before the sodas were regulated and these plants were no longer used in the production of soda, the effects of drinking a coke were nowhere near as drastic as these nefarious narcotics we know of today.

However, the effects were similar to drinking coffee or another caffeinated beverage, so even after the use of the coca plant was banned in the production of sodas, companies continued to add in caffeine.

The Amount of Caffeine in Soda is Very Small

The amount of caffeine in a soda is a lot less than that in a coffee.

Drinking a coke with lunch or with dinner can be a pick-me-up for most people, but many will not even notice a strong energizing effect from drinking soda.

There are also caffeine free sodas that are available in the market for those who are concerned about the small amount of caffeine that is in soda.

The amount of caffeine in a soda is insignificant compared to drinking an energy drink or a coffee, which is why it is preferable for some people who want a boost of caffeine throughout the day or in the morning, but do not want the jitters from drinking too much caffeine in a cup of coffee.

In addition to the pick-me-up that the caffeine provides, the sugar in soda can also be energizing.

It also makes it taste great, which is the main reason why people like sodas so much, is for their bubbly, sweet flavor that also gives you a boost of energy.

In this section of the article we will answer some of the most frequently asked questions about caffeine in soda.

A lot of people do not know the answers to these questions, but if you are interested in the amount of caffeine found in soda, you may want to know.

Does Caffeine Change the Flavor of Soda?

When the US government once proposed that sodas remove the use of caffeine, the soda companies responded that they needed to continue to use caffeine in the production of their products in order to replicate with flavor of the sodas that came before.

However, there are studies that have found that most people do not notice a change in flavor based on the amount of caffeine is in the drink.

Is the Caffeine in Soda Addictive?

There is not much evidence to support that the evidence in soda is addictive.

Some people find that sugar has mildly addictive properties and this is part of what makes the pick-me-up of a soda powerful is that it is a combination of the small amount of caffeine as well as the sugar.

The caffeine in soda is not really addictive, although you may like the effects so you will want to continue to drink it.

How Much Caffeine is in Soda?

The amount of caffeine that is in a soda will depend on the brand.

A cup of coffee will have an average of over 90 mg of caffeine per serving, so soda is a much less potent stimulant, but it does still have an energizing effect on the body which is why so many people like it.

Mountain Dew has an even higher amount of caffeine than Coke or Pepsi.

The amount of caffeine in a soda will vary, but is less than that of half a cup of coffee usually.

In conclusion, the reason why sodas contain caffeine is that historically they used to contain energizing plants naturally and since people enjoyed this the companies wanted to continue to deliver the same product by adding in caffeine.

A lot of people like that soda contains a small amount of caffeine because it is a lot less than tea or coffee but can still provide a small pick me up.

There are lots of sugar-free sodas that are available in the market as well that you can enjoy if you do not want to consume caffeine.

There are no conspiracy theories about why sodas contain caffeine other than that they used to be made from the coca leaf for flavor.

Additionally and because there was a demand for these drinks companies found a way to replicate the experience even after the government regulated the sale of these types of drinks and banned the use of the coca plant in production of Coca Cola and other dark sodas.

Soda is perfectly safe to consume in moderation and the effects of the caffeine are much less than that of coffee, but be sure to check with your doctor if you are unsure if you should be drinking caffeinated beverages.