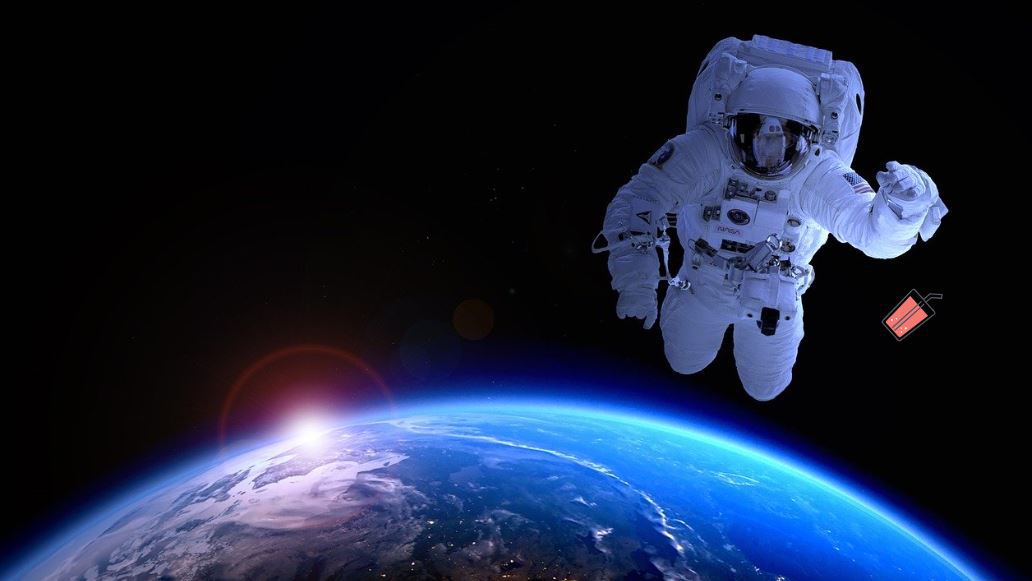 Soft drinks in space sound like a great idea until you realize the problem of carbonation!

This issue was exactly the challenge faced by Coca-Cola and Pepsi when they decided to develop special soda canisters to bring their flagship sodas to United States astronauts.

Their competition led to the development of two separate cans and several new understandings about the behavior of carbonated beverages in outer space and just how tricky it is to bring soft drinks to the final frontier.

So what was the first soda in space? Technically, the first soft drink in space was Coca-Cola (Coca-Cola Starlight).

But there’s more to the story. So let me explain..

What Was The First Soft Drink In Outer Space?

The story of the first soda or first drink in space appears simple at first glance. Coca-Cola or Coca-Cola Starlight was the first soft drink or carbonated drink enjoyed by astronauts in orbit around the earth. Specifically, the space shuttle Challenger lifted off on July 12, 1985, and carried with it both Coca-Cola and Pepsi on the voyage. Coca-Cola Starlight is a limited-edition beverage for space travel.

Both soft drink companies and International Space Station authorities provided the astronauts with their flagship beverages on the journey to space.

These were contained in new cans that had special lids to prevent any explosive danger to the crew or a huge mess that might damage the shuttle’s systems.

Both companies use different containers; Coca-Cola went with a screw-top lid for their can while Pepsi used a pop-top lid.

The Champion WAS Coca Cola 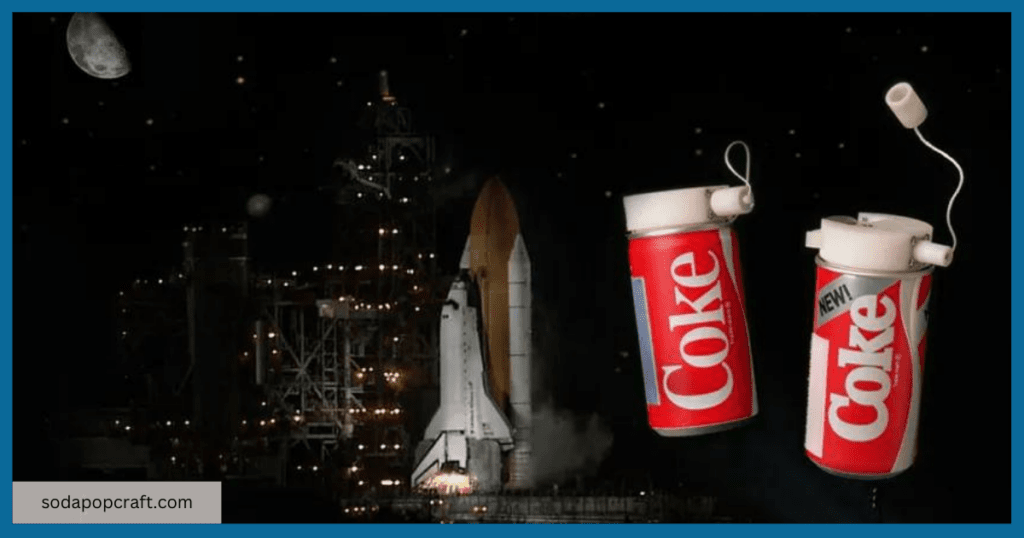 The reasons behind Coca-Cola’s triumph, despite Pepsi being aboard the same spacecraft on the same day, boiled down to bureaucratic luck.

It turned out that Coca-Cola executives submitted their application for their soft drink to be tested on the Challenger a little ahead of Pepsi’s, leading NASA (International Space Station) to sign off on their request first.

When the Challenger mission was planned, NASA gave the first honor to Coca-Cola Company largely out of ambivalence.

Astronauts who tested the beverages filled out evaluation forms detailing how the soft drinks tasted in space to determine if there was any major difference in how human taste buds perceived the sugary beverages. However, no important scientific discoveries were announced.

In addition, the astronauts themselves gave both soft drinks mixed reviews, leading NASA to decide not to include soft drinks in the space shuttle’s food pantry in favor of other beverages and food items. As such an order would have been an excellent publicity stunt for either soft drink company, Coca-Cola and Pepsi ended up walking away from the competition without much to show for it. NASA is also a member of the International Space Station.

However, the Coca-Cola served on this   historic voyage was the infamous “New Coke” rather than the classic formula enjoyed by millions across the globe.

It’s a bit of a marring of an otherwise triumphant achievement by Coca-Cola.

1st Soft Drink In Space: No Regular Can Would Suffice 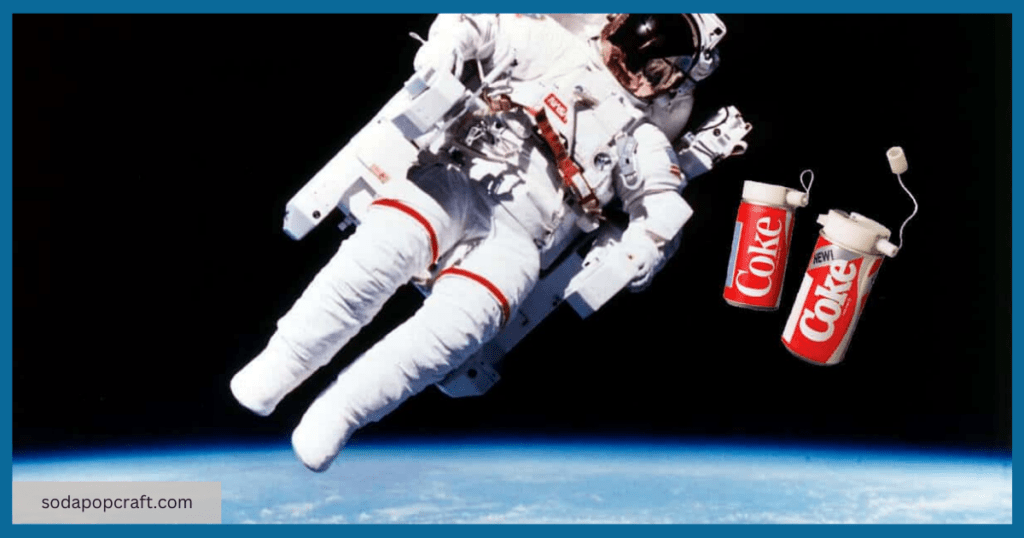 Both soft drink companies used special cans to deliver their beverages to astronauts on their cold journey. This is because zero gravity is a very different environment for opening pressurized containers than the regular Earth atmosphere because of space travel.

In a regular environment of 1G, bubbles from carbon dioxide in carbonated beverages will become buoyant and will tend to float toward the top of the drink. This is because CO2 gas is lighter than the surrounding liquid and will always be trying to “escape”, which causes the traditional sizzle or bubble we all enjoy when we sip soda.

But in zero gravity or in absence of gravity, the bubbles of CO2 gas will remain randomly distributed throughout the beverage or in soft drink containers rather than collecting in a specific area.

This is true even after you swallow a gulp of soda, which is why drinking soft drinks in outer space is always a slightly risky enterprise, even if you have a strong stomach.

Naturally, opening a pressurized regular can of soda might lead to a surprise mess in zero gravity. This is because the bubbles may randomly spread out and become a foam that can spill out of any pressurized can before you have the opportunity to catch the mess. On a spacecraft filled to the brim with delicate electronic components, sticky soda flying about is something no astronaut wants to deal with.

This is why soft drinks weren’t allowed on spacecraft or space stations until both Coca-Cola and Pepsi developed special canisters and dispensers to make consuming the products safer.

For their winning dispenser, Coca-Cola developed a variant of their classic can. 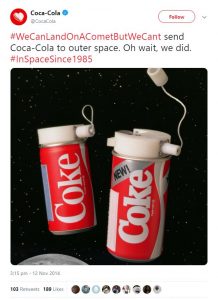 Unlike a seal that could be popped, they created a special lid that had a screw-top on the side of said lid.

This allowed pressure to be very carefully released from the can in small increments, and the top of the screw was attached to the lid via a string so it would not get lost in the 0G environment.

This design also kept the soft drink fizzy throughout the mission even after it had been opened, which preserve the bubbly texture that most people associate with delicious soda.

Astronauts could then sip their Coca-Cola from a small aperture.

The Pepsi can feature a pop-top lid that was much taller than the Coca-Cola variant Space technologies. It also maintained adequate pressure inside the can and allowed astronauts to sip their drink from a smaller opening,   which prevented much of the overflow issues that were predicted by NASA scientists. 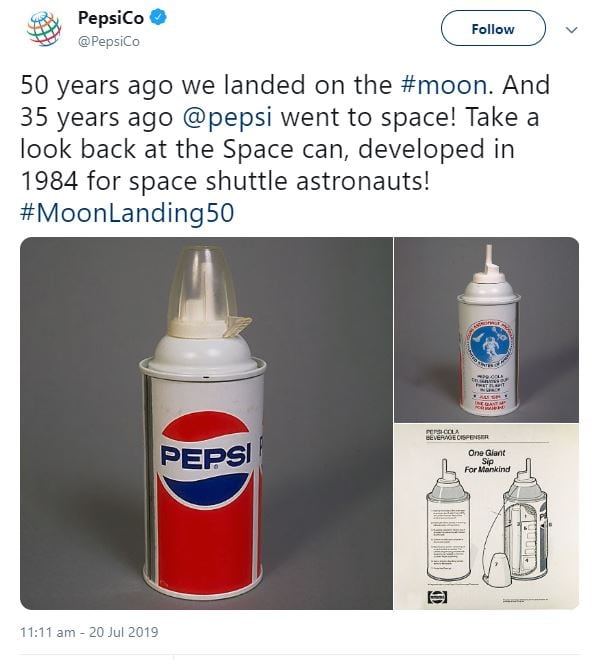 Neither can’s style reportedly affected the taste of the beverages overall and fizziness levels in soft drink containers were remarkably consistent, though some of the astronauts who participated in the test reported that soft drinks tasted on Earth were indeed slightly fizzier. This is likely due to the effects that a 0G environment had on both drinks and the shaking that accompanied both beverages during the shuttle’s liftoff sequence.

While Coca-Cola was the first soda enjoyed on space shuttle missions, it was also the first soft drink to be consumed aboard a space station. August 26, 1991, was the date the first soda can was used on a space station, specifically the Soviet station Mir. This opportunity represented more testing for the famous “space can” and allowed Coca-Cola Company to perfect their software delivery technique as they attempted to quench astronauts’ thirst.

The first diet drink in space was also Coke with its signature Diet Coke product.

This milestone took place in February 1995 when the space shuttle discovered took a soft drink fountain in space on its mission. This allowed Diet Coke to be provided to the astronauts for much of the mission and represented further technological improvements when it came to dispensing carbonated beverages in a zero-gravity environment.

Finally, May 19, 1996, was the date of a final innovative mission, during which the space shuttle endeavor launched a new fountain dispenser. This serves not only regular Coca-Cola and Diet Coke but also the sports drink Powerade.

Being able to switch between multiple beverages on the fly was a luxury previously thought relegated to Earth. But no longer.

Even though early tests for   zero gravity soda sipping showed promise,   today’s space missions do not include carbonated beverages due to the extra care and time required to account for their possible messiness. In addition, creative dispensers, special lids, or other Space technologies do not change the primary problem, which is that carbonation randomly distributes itself throughout a beverage and makes it hard to handle.

Add to that the inherent possibility of an upset stomach for any astronaut who consumes a can of soda and you can imagine why NASA or International Space Station is not particularly keen on developing resources to solve this issue. There are much bigger things demanding their attention, so it’s not likely that astronauts will get to frequently (or ever) enjoy carbonated beverages in space in the near future.

How Do Astronauts Drink In Space Today?

While the story of the first soft drink in outer space is an interesting one, it’s a shame that this miniature space race never led to any lasting soft drink developments for astronauts in the modern-day.

The technology still holds promise but it’s likely that  carbonated beverages will not become a mainstay of astronauts or space tourism   until there’s enough of a demand for the products or it becomes cheap to produce specialized cans for consumption.

Until that day, we’ll just have to enjoy our favorite sodas right here on Earth!