Eggnog is the classically Christmas drink that surges in sales in November and December and brings a sense of nostalgia to most.

Even though its so popular many people still have questions about what eggnog is exactly.

As a fan of eggnog you probably want to know why this is such a holiday favourite and why its easier to get your hands on this drink during the last two months out of the year.

So let’s cover that one burning questions

Is Eggnog only served during Christmas?

Not is is available all year round however as it has been US tradition for hundreds of years this make its typically more prevalent in stores during the winter months and on the run up to Christmas.

You will see more of it stacked on shelves and marketed during the thanksgiving and Christmas holidays – hence why you may believe that its only available then.

sales have increased typically increase during November and December due to the tradition of drinking Eggnog at Christmas time.

Furthermore Eggnog is a more popular drink in places with cold winter months and another reason why you’ll see more people drink it in the Northeast United States and Canada than in the south.

Eggnog has been popular for centuries.

This drink is thought to have started as a drink for the British aristocracy.

The warm drink would be spiced with various spices and served with either sherry or brandy to keep the eggs from spoiling.

In America getting rum for eggnog, the alcohol used to keep eggnog from spoiling, was difficult and this could be a contributing factor as to why it became a seasonal drink. Now it has transitioned into the festive Christmas drink that we know today.

This was only among the first transformation that eggnog would make in America.

Today not only can you buy eggnog as a drink in a carton, but you can also buy it as ice cream and in other dairy-based treats.

Despite the growing popularity, there are still many questions about this drink and its popularity.

People are curious about what exactly is in eggnog. Does it actually have eggs in it? What about alcohol? Why is it called eggnog, to begin with? Answering these questions can go a long way in demystifying the popular drink.

Why is Eggnog Called Eggnog? 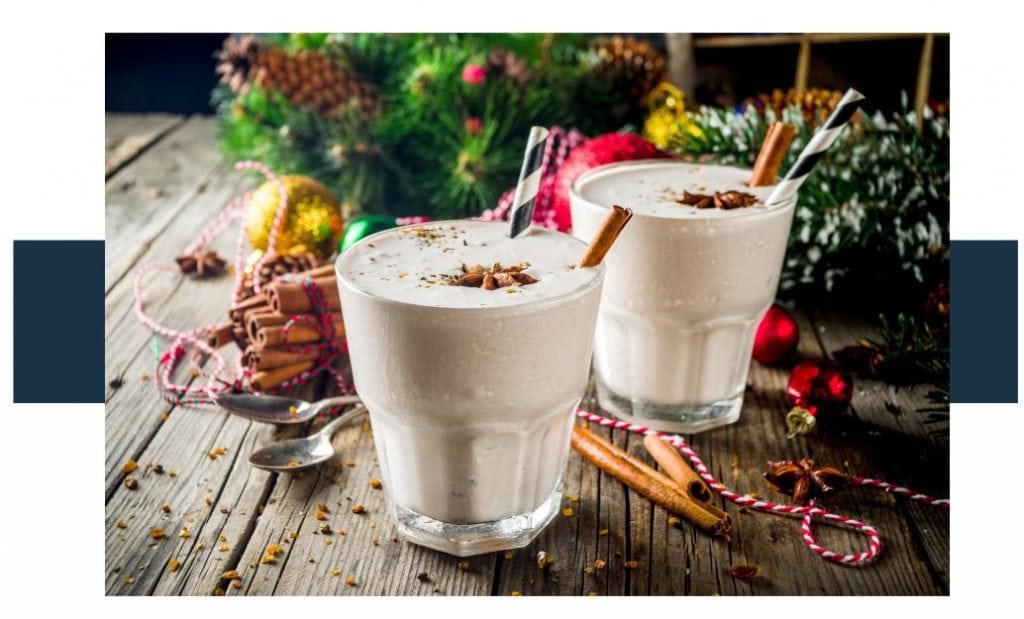 The origins of the word eggnog are unknown, we can only speculate about how the name developed into what it is now.

The name does roll out of your mouth interestingly, with all the g-sounds and some people are put off by these sounds.

The name seems to derive from the term nog, which was a strong ale in England, and the word egg.

Nog could also be derived from the term noggin, a type of serving mug.

Since the drink also contains eggs, it would be easy to see how using the word eggs would be simple to do.

The name can also be derived from a rhyming play on words.

People used to say “egg and grog in a noggin’” and overtime that was shortened to eggnog.

Grog being an alcoholic liquor common during the initial rise of the popularity of eggnog.

The name eggnog may not have originated with rhymes and shortening words.

One of the first recorded drinks consisting of milk curdled with alcohol was called a posset.

By 1775, the first use of the name eggnog was used for a drink consisting of eggs beaten with sugar and cream.

It would appear that this name has stuck for several reasons and is not likely to go anywhere.

Regardless of the origins of the name, the drink has remained memorable in part because once you hear the name you know what you’re getting.

A drink with eggs in it.

It may not be fun to say for some people but there is no guessing about what the drink contains.

Does Eggnog Have Raw Eggs? 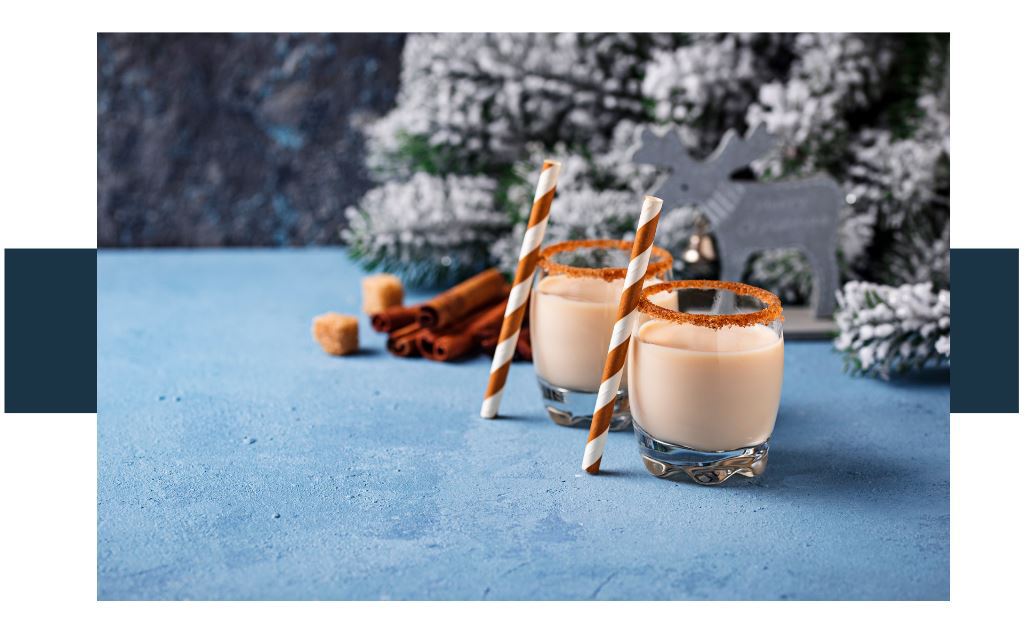 The recipe for eggnog can be in dispute.

Due to restrictions on what can be sold in stores for safety reasons, some eggnog lovers claim that the only good eggnog is homemade eggnog.

They insist that the eggnog sold in stores is an imitation of eggnog and should not be used to determine if you like eggnog.

Many government agencies prohibit selling products with raw eggs in it or limit the number of raw eggs you can put in a product.

The CDC in The United States prohibits eating or consuming any raw eggs due to the chance of getting salmonella.

This means that purchasing eggnog from a store means that the recipe will be different than if you made it yourself using a family recipe.

The eggs in store-bought eggnog will be pasteurized, along with all the other dairy products in the drink.

Eggnog purists insist that this is not the correct way to drink eggnog and this is why so many people don’t like it.

After all, how can you say you don’t like something if you’ve never had the real thing?

Eggnog lovers often make their eggnog from family recipes passed down through generations.

The First President of the United States had a recipe written down.

His recipe called for egg whites and yolks to be separated and beat the egg whites until stiff.

Family recipes call for raw eggs that will be preserved by the alcohol in the drink.

This minimizes the risk of getting salmonella they claim.

Having this popular drink as it was intended to be drunk is worth the risk though eggnog purists say.

Does Eggnog Have Alcohol? 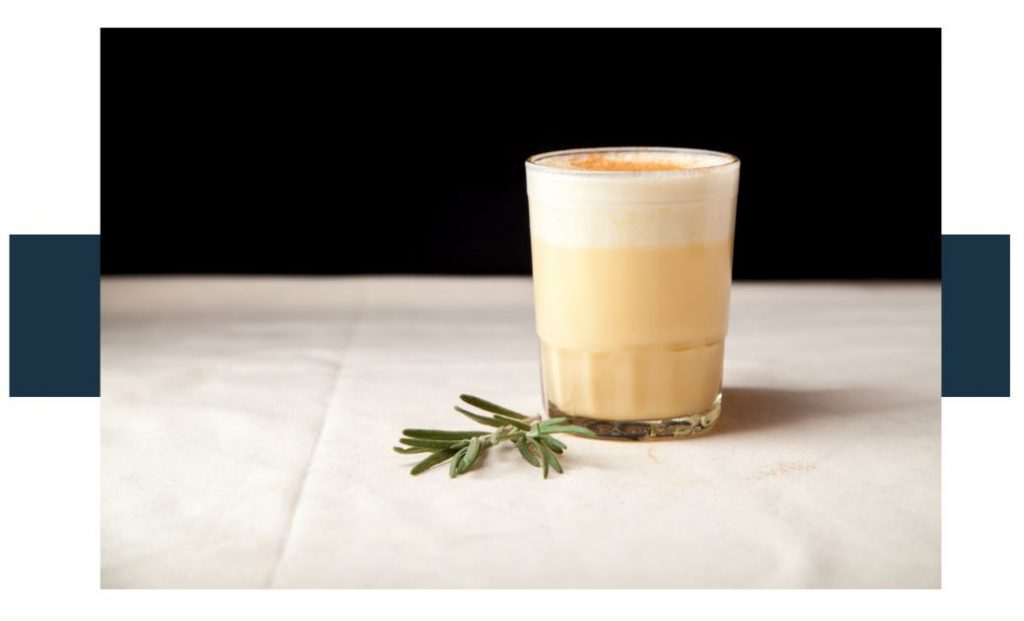 The ingredients that the eggnog you drink depends on where you got it.

To follow safety protocols and to make sure that eggnog can be family-friendly or available to people who don’t drink, there are alcoholic and non-alcoholic versions of eggnog available.

Whether these can be called eggnog is up for dispute by eggnog purists.

When you purchase eggnog at a store it will likely not have alcohol in it, especially if purchased at the diary section of the store.

There are variations you can buy that do have alcohol that is typically available at liquor stores.

There is also nothing stopping you from adding some spiced rum or brandy to the eggnog purchased from a store.

Eggnog purists though insist that this is not the proper way to drink eggnog.

Eggnog passed down in family recipes have alcohol in them.

The type of alcohol can vary from brandy to rum to sherry.

It comes down to personal preference and family recipes.

Some modern recipes even call for Kahlua to make a chocolate variation of the classic.

The kind of alcohol used in eggnog has changed over the years depending on what was popular at the time.

Alcohol variations ranged from ale in the early days to brandy and whiskey during the days of The American Colonies.

People used whatever was available for their drink.

The alcohol is important in these recipes because the alcohol is needed to preserve the eggs and keep them going bad.

Minimizing the risk of getting sick from raw eggs.

The alcohol is not just for taste, it keeps the drink safe to drink.

Eggnog is a popular drink for many in America and Canada.

Its biggest supporters stick to family recipes instead of buying from a store, where they can put in the raw eggs and alcohol that gives eggnog its special kick.

It has remained a popular Christmas drink for generations will remain so for a long time.