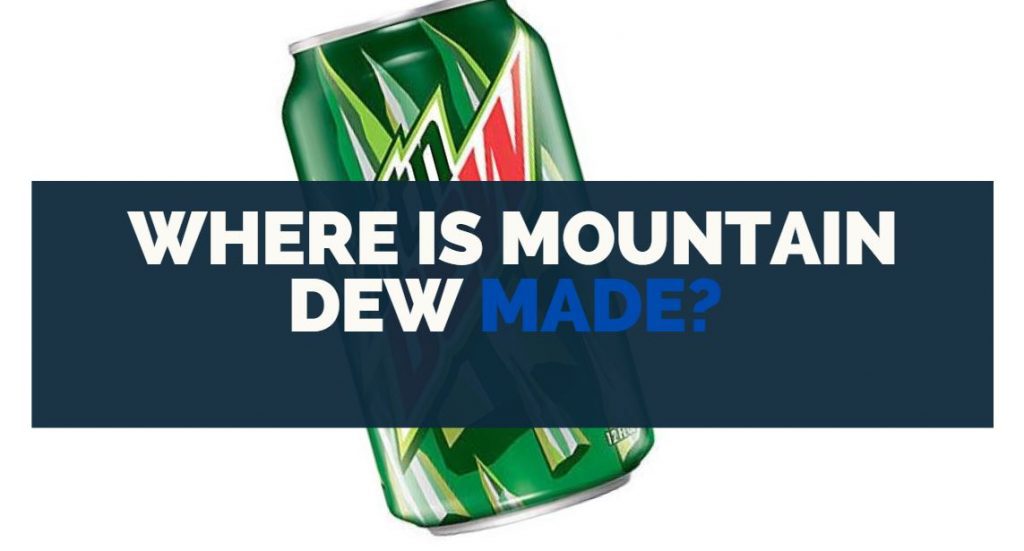 But where is Mountain Dew made?

Mountain Dew originates from Tennesse, USA however, is currently made in various manufacturing plants that are property of PepsiCo.

Prior to its inclusion within the lineup of Pepsi products, it was first made in the 1940s in Tennessee by Barney and Ally Hartman. Originally, it was designed as a mixer for various alcohols such as whiskey.

Prior to it being a name for a soft drink, it was a slang term for a brand of Scotch Whiskey that was made in the 19th Century.

Shortly after their newfound drink was sampled by locals in Tennessee, the Hartmans wanted to take it nationwide.

Originally, the made the offer to the Coca-Cola Company. However, Coca-Cola rejected it.

In 1964, PepsiCo purchased a small company known as the Tip Corporation, which owned the Mountain Dew brand at the time.

The acquisition brought Mountain Dew under the Pepsi umbrella and now included it in one of its many soft drinks that were made available to their customers.

The soda was targeted at younger people, especially the “adventurous, outdoorsy” generation. As the years passed, the logo changed a few times and soon many different flavors of Mountain Dew were unveiled.

Read on to find out who owns the Mountain Dew brand and where it might be banned in the world?

Since 1964, the Pepsi Cola Company or PepsiCo has owned the Mountain Dew brand.

Prior to that, a Virginia-based company named the Tip Corporation had owned the rights to the brand named.

As of today, it is still one of their most popular brands of soft drinks under the Pepsi umbrella.

Though the original Mountain Dew has reigned supreme for many years, there have been different flavors that have been introduced to their market. Its first flavor was “Code Red”, a cherry-flavored version of Mountain Dew that was introduced in 2001.

It still remains on the market to this day. In its first year on the market, Mountain Dew’s sales had increased by up to 6%.

Though it is a cherry flavor in the United States, Australian customers were introduced to a berry flavor when it hit the shelves Down Under.

As of today, Code Red is discontinued in Australia and a few other countries around the world.

Aside from the United States, New Zealand is the only country in the world where customers can find Code Red.

Due to the success of Code Red, this leads to PepsiCo to go back to the drawing board to find an additional flavor that would further bolster its market share in the soft drink market.

Two years after the success of Code Red, Mountain Dew introduced Livewire to the mix.

Livewire is an orange-flavored Mountain Dew that been available as a limited release from 2003 to 2005. Due to its popularity, it would soon become a permanent fixture in the mid-2000s.
Due to its partnership with Kentucky Fried Chicken (KFC) and Taco Bell, some Mountain Dew flavors were only exclusive at participating locations. One of the first exclusive flavors was the Baja Blast.

The tropical flavor Mountain Dew was only available in a fountain soda. It wasn’t until recent years when Baja Blast would hit the shelves as a seasonal flavor.

However, it was permanently bottled in both the United States and Canada. Today, Baja Blast remains as a permanent fixture at participating KFC / Taco Bells.

From time to time, Mountain Dew has released various flavors under the “Game Fuel” moniker. Some of the flavors in the past include Citrus Cherry, Arctic Burst, Tropical Smash, and more.

Not only were they aimed at the gamer market, but it coincided with the release of popular video game titles.

Why Is Mountain Dew Banned? 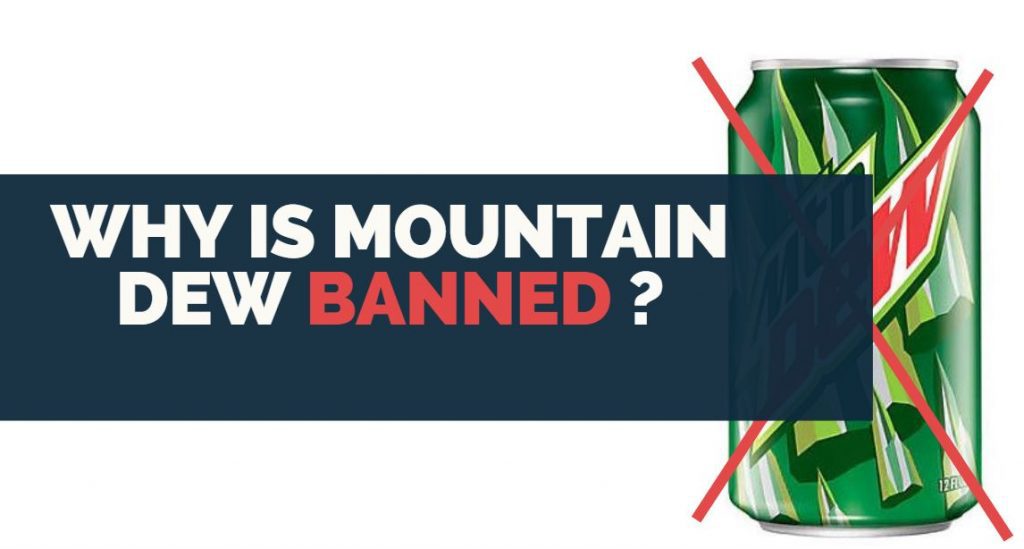 As of today, more than 100 countries have banned Mountain Dew.

It is said that one of the ingredients was flagged for being considered “unhealthy”. Brominated Vegetable Oil or BVO had been used in various food supplies around the world.

And it had been under a ton of scrutiny for years. Because of this, the soft drink is only available in a limited number of countries.

Another reason why it was banned was due to the supposed adverse health effects that were linked to BVO.

BVO is said to contain a chemical known as bromine. Bromine is believed to be linked to health issues such as organ damage, hearing loss, schizophrenia, birth defects, and other problems.

Along with Mountain Dew, other foods that believed to have contained BVO had been removed from the markets throughout much of the world.

It had come to a point at one time where an unnamed American teenager started a petition for Mountain Dew to remove BVO from its list of ingredients.

However, it is said that BVO is also found in certain sports drinks. At one point, Gatorade had contained this ingredient and had since been removed as of 2014.

Even today, BVO is still included in Mountain Dew and it’s unclear why it remains.

BVO is said to be a useful chemical for various purposes. For example, BVO can be used as a flame retardant.

As of today, Mountain Dew and its various flavors have either been outright banned or discontinued.

However, several countries including the United States, Canada, the United Kingdom, New Zealand, Australia, and the Philippines are among the handful of countries that still sell the original Mountain Dew flavor.

Flavors like Code Red, Livewire, and others had been released as part of a limited-time promotion and had since been discontinued in several countries outside of the United States.

In early 2020, a post had made its rounds on social media claiming that PepsiCo was discontinuing Mountain Dew in June 2020 because of the ingredients that were linked to various health issues.

This post turned out to be false. However, the Center for Disease Control did warn users to drink soft drinks in moderation in order to avoid any adverse health issues.

They said that frequent soda intake would lead to health risks such as diabetes, obesity, and tooth decade.

Though Mountain Dew has long since gained a cult following among its fans, it still has a shadow cast above itself.

The fact that is has been banned in 100 countries due to a single flavor is head-scratching, to say the least.

However, there is no word yet on whether or not if BVO will be removed from the list of ingredients.

It is due to BVO that Mountain Dew maintains that “glowing” green feature. Even today, amid the reports of negative health effects, Mountain Dew is responsible for 6 percent of the world’s soda sales.

Further proving that even though it’s not available in nearly every country of the world, it can still be able to generate sales for PepsiCo.

With its wide variety of flavors (including some exclusive flavors that can’t be found in stores), Mountain Dew still reigns supreme in the soft drink world despite Coca Cola re-introducing its direct competitor Surge in recent years.

The only difference is while the caffeine content is roughly the same, Surge contains no BVO.

IF you’re still after that Mountain dew fix then you can get a case here on Amazon.  Please consume it in moderation folks!