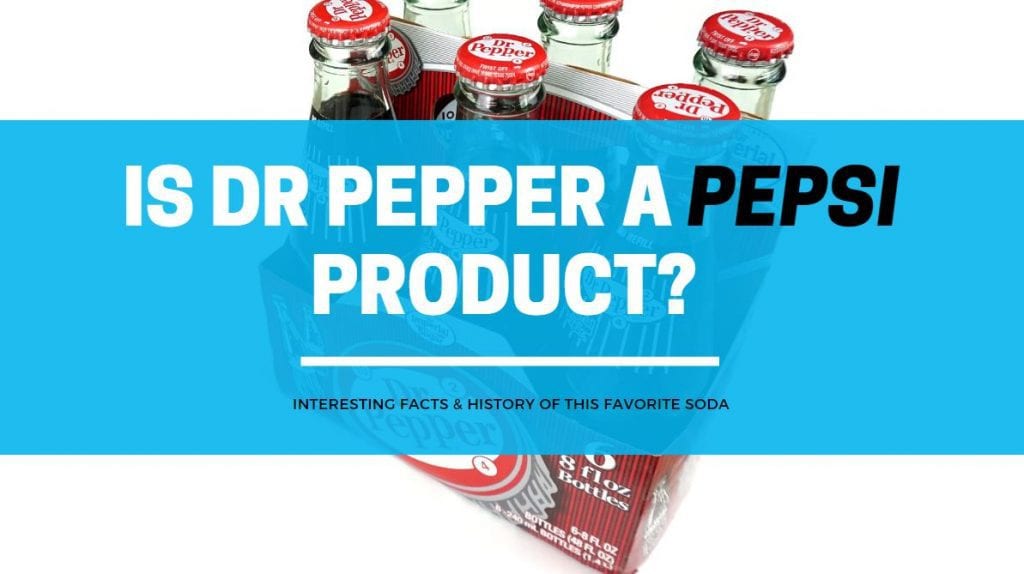 Dr Pepper is a NOT a Pepsi product it is part of the Dr Pepper Snapple Group.

While it is very common to see Dr Pepper alongside other Pepsi drinks at soda fountains, Pepsi does not actually have direct ownership over Dr Pepper.

The reason that Dr Pepper can be seen alongside other soda brands is that Pepsi and Coca Cola have small shares in the Dr Pepper’s parent company that will be looked into further as to how they are able to distribute Dr Pepper from their Fountains.

It, therefore, means that bottlers owned by PepsiCo, The Coca-Cola Company, and others are licensed to bottle and distribute Dr Pepper across the rest of the world and specific states in the United States of America

Dr Pepper was independent of any parent company for many years and has only recently merged with Snapple to create a larger corporate entity.

Who Owns Dr Pepper? In 2018. The Dr Pepper Snapple Group was purchased by Keurig Green Mountain which has the primary share of ownership today.

The brand now produces a wide variety of products from Keurig products and other sodas that are owned by the parent company that Dr Pepper comes from.

The Dr Pepper name is one of the most common soda products in the United States and has a rich history full of interesting marketing and sales choices.

The brand is seen at almost every soda fountain across the nation, but not everyone knows who exactly owns and produces the drink.

By taking a look at where the brand started and what it has grown into today, we can finally figure out the origins of Dr Pepper and find out if it is or isn’t a Pepsi product.

Even with all of its recent additions and new products being launched, the Dr Pepper brand goes back over 100 years and has seen many changes to its brand image since its beginnings.

In 1880, Charles Alderton created the first recipe of Dr Pepper and began to test its appeal.

He gave it to locals to try out and found it to be an instant success with those who tried it. The drink started its life as a common soda, but it quickly gained traction as a drink that had medical benefits.

Just like the Pepsi and Coca-Cola brands that were forming at the time, many people believed soda to have special qualities that make it good for health.

Ever since its original inception in the early 1900s, Dr Pepper has been growing and developing new products and flavors to expand the company’s overall reach.

The original Dr Pepper recipe is still a secret to this day and is said to be split up among multiple locations to keep the recipe a secret.

Dr Pepper is one of the most synergistic brands of beverages in that they work alongside many other companies to keep expanding and produce their product lines.

Dr Pepper has gone through some major changes in its long history and has had to adapt and alter its marketing style to change with the times.

The name Dr Pepper has been around for many years and set themselves apart from the competition has helped them instrumentally.

The phrase “Dr Pepper Time” was widely spread throughout America as several times throughout the day when a radio show would air and promote the drink.

Throughout its marketing history, Dr Pepper has been widely featured in multiple movies and television shows that helped to spread the message of the company.

Dr Pepper was famously the drink of choice for Forrest Gump and was also featured in many other movies in the 1990s where their ad campaigns were determined to solidify Dr Pepper as a unique beverage and not just another cola.

One of the older and more famous “mascots” of the company was the Dr Pepper Girl.

Donna Loren acted as the Dr Pepper Girl throughout the sixties and serves as the public figure who represented the brand through all forms of media.

She would regularly sing and commentate on the brand on television appearances and worked to help set up many marketing events for the company across the country. 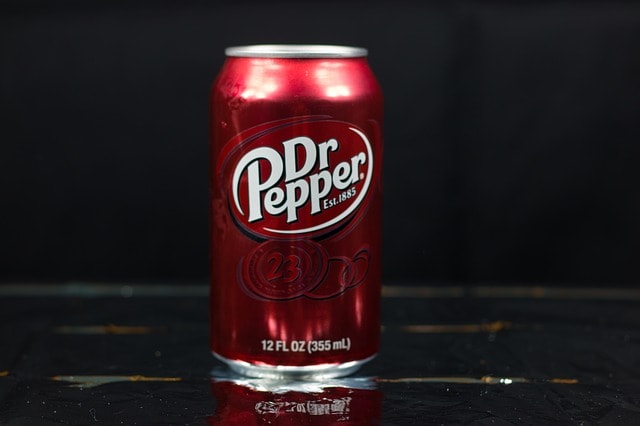 Why the name Dr Pepper?

Just as most people have heard of the Dr Pepper name and know of the drink, most people also wonder why exactly the drink is called Dr Pepper.

There are many rumors and myths surrounding the exact origins of the name, but there are a few more solidified beliefs of why the drink was named like it was.

In the days in which the drink was produced, Pepsi and Coca-Cola often marketed their drinks as dietary aids and almost like a health product.

Many believe that the inclusion of the “Dr” in Dr Pepper was put in place to establish the drink as a healthy beverage that had medical backing.

Another popular theory is that Dr Pepper was named after an actual doctor.

The creator of the drink actually was in acquaintance with two Dr. Pepper’s who could have been the source for the name of the brand.

Each doctor was to have had some impact on the drink’s original creator which led many people to believe that they are the namesake of the soft drink.

However, no matter how many theories are out there, it is still not known to this day the true origins of why the drink has the name that it has.

Association with Coke and Pepsi

Throughout the brand’s history, Dr Pepper has gone through many changes and faced many clashes with other corporations in the industry.

In 1951, Dr Pepper and Coca-Cola stepped into a heated legal battle over a trade agreement that ended in a heavy lawsuit against Coca-Cola.

Since their clash in the 50s, Dr Pepper and Coke entered into a more positive relationship that saw the two companies working together to use Coke bottling facilities to help Dr Pepper bottle their products.

Several times throughout recent history Coke and Dr Pepper attempted to merge for financial benefits to both companies, but the federal trade organizations would not allow the merger in fears that the two companies would form a monopoly over the soda industry.

The labeling of Dr Pepper as a “pepper” flavored drink, as opposed to a cola, was used many times to try and separate the similarities of the brand for economic gain.

Pepsi was not as economically involved with Dr Pepper as Coke was, but they still played a large part in their distribution.

Up until very recently, Pepsi and Coke were the primary distributors of Dr Pepper and made most of the bottles that Dr Pepper was served in.

It is ties like these that sees Dr Pepper spreading its reach and is why Dr Pepper is often seen alongside Coke or Pepsi at a drink machine.

In an attempt to get some positive publicity, Dr Pepper stated that if the famous band Guns N’ Roses released their new album in 2008, they would offer a free Dr Pepper to everyone in America.

Guns N’ Roses responded with open arms and was looking forward to the collaboration and its benefits to Americans.

However, despite effort on the side of Dr Pepper, they were unable to actually meet the demand that was there and faced a lawsuit by the lawyers of the bands for failing to deliver on their promise.

Dr Pepper Capital of the World

One of the more obscure associations with the Dr Pepper name is that Dr Pepper has found a strange correlation between one geographical location and Dr Pepper sales.

Roanoke Valley in Virginia is in the same general are of the drinks founder, and also houses the first Dr Pepper plant form all the way back in 1936.

The city not only has roots with the company and its founder, but it is also the area that has the highest consumption of the drink anywhere in the united states

Dr Pepper has been supporting the are and helped it to maintain its original Dr Pepper landmarks and in 2015, Roanoke city declared October 24th to be Dr Pepper day in memory of the “10-2-4” slogan that was made famous by Dr Pepper adverts.

Dr Pepper has its Own Museum

Located in the town of Waco Texas, an old bottle manufacturing and bottling facility that was Dr Peppers first own facility is now the home of the Dr Pepper Museum.

The Museum used to be a fully functioning Dr Pepper processing facility and was turned into a museum for the public in 1991.

The Museum has many exhibits and spans 3 floors full of Dr Pepper memorabilia that is open for the public that traces out the history of the brand and some of its landmark achievements.

The Museum also features a gift shop full of memorabilia that you can take to have a part of Dr Pepper in your own home and even features an old-fashioned soda machine that brings you back to when Dr Pepper was first created.