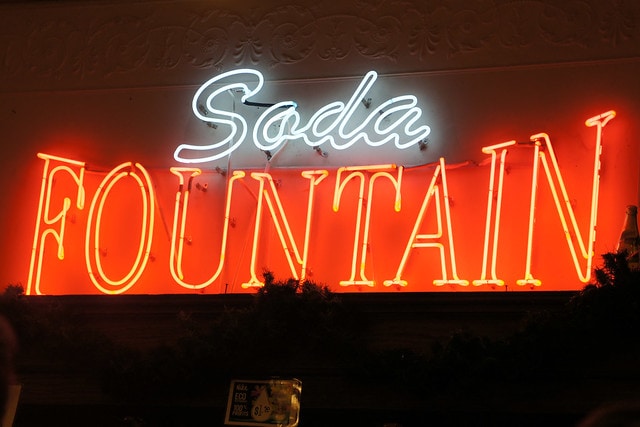 Occasionally, you might try soda from one fountain and find it to have a terrible aftertaste, while soda from a different restaurant’s soda fountain tastes just fine.

This difference can lead people to wonder where soda tap fountains get their water and what kind of a difference it might make in the taste of their drink.

So do soda fountains use tap water?

They do use tap water, in the vast majority of cases. Tap water is able to hook up to most soda fountains’ interior pumps, providing fresh cold water constantly throughout the day.

Since fresh cold water is required to make new carbonated water, soda fountains can take advantage of the accessibility of city tap water and its temperature control to maximum effect. 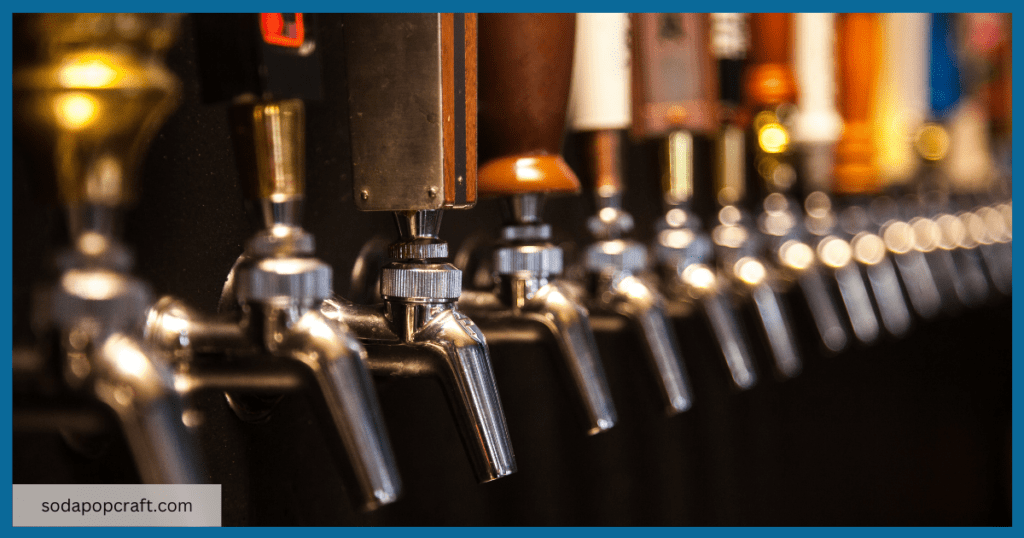 How do soda fountains work?

Tap water is usually filtered, too, so it doesn’t contain a large number of health risks like some people may think. While filtered water that has been excessively treated in small batches might be even healthier due to having fewer contaminants, such a system is impractical for most soft drink fountain usage.

Soda fountains usually dispense a ton of soda in any given day.

Since the machines are designed to fit onto the countertops of most restaurant tables or bars, their water tanks can’t be large enough to effectively store a bunch of slow-treated water for the entire day’s business. Therefore, tap water is a logical resource for most soda fountains.

So why is tap water the kind that is almost universally used among soda fountains? 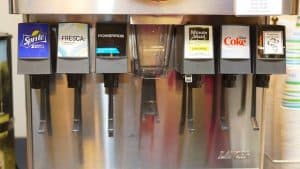 It’s largely a matter of scale. When you consider the fact that most soda fountains are installed at restaurants and other places where people consume a lot of soda, it becomes clear that tap water is the only choice for the vast majority of businesses.

People drink millions of gallons of soda each day. While a single soda water fountain won’t reach this amount on its own, a single restaurant may serve several hundred gallons of soda on a busy day and many more over the course of an entire week.

Soda fountains have a fixed size that can’t go beyond a certain limit.

Their reservoirs for filtered water have to be limited to up to a few gallons in order to accommodate the space inside a restaurant or shopping mall. Because of this, refilling the water tanks with water brought from another source besides the city tap is impractical in most cases.

Water from the tap can be used to refill the carbonation tank almost immediately. The tank can be connected right to the same water source used by the home restaurant, hotel, or venue, so the fountain can have an unlimited supply anytime it requires fresh water.

This eliminates some labor from the fountain’s maintenance crew, as well. They already have to refill soda flavoring bags, the ice bin, and the carbon dioxide tanks regularly. Making it so that water is the one aspect they don’t have to worry about is a great weight off their shoulders. 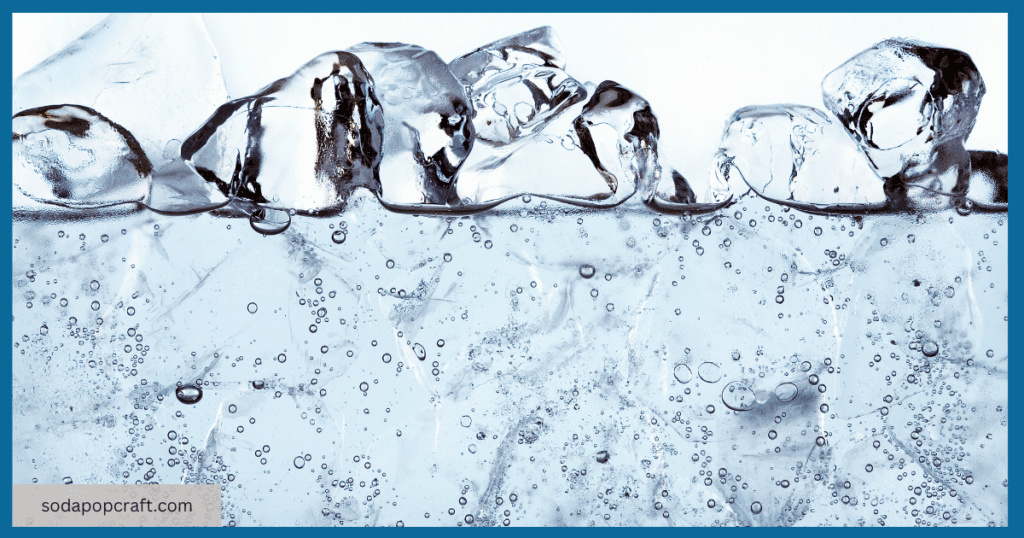 It also ensures that the water fountain part of the machine will always work, even if the carbonation process is in need of repair.

Giving your customers filtered water on demand is a necessity for any restaurant.

While it’s possible to have your own soda fountain and only fill it with filtered water that doesn’t come from your local tap, you won’t be able to keep up with the kind of dispensing and production that most commercial soda fountains see on a daily basis. In addition, local tap water has the advantage of being hot or cold as desired, so soda fountains can get all the cool water they need to serve their thirsty customers at a moment’s notice.

Essentially, tap water is used in most soda fountains because it’s the only real choice for business. Soda fountains aren’t designed to dispense high-quality craft soda; they’re designed to give out a lot of regular soda in rapid succession. 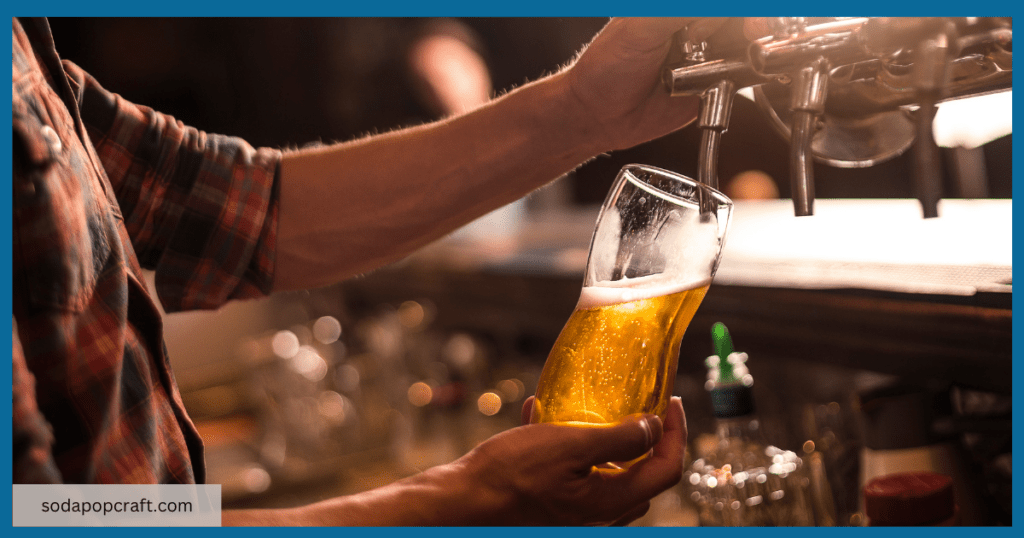 How does a soda fountain work?

That being said, there’s nothing necessarily wrong with using regular tap water in soda.

For one, most tap water is filtered to such a degree that you shouldn’t be able to tell any noticeable difference in taste once the water has been mixed with the soda ingredients.

For another, tap water filter technologies have grown over time. While it’s true that some places have better-filtered tap water than others, most tap water is appropriately filtered to be safe for normal drinking. This means that it is perfectly fine for mixing with soda without lending any health risks to the drinker.

There is a multitude of different filter technologies which may be used by a city to clean its tap water before consumption. In most cases, cities filter water through several different mechanisms to clean out a variety of different particulates or contaminants. 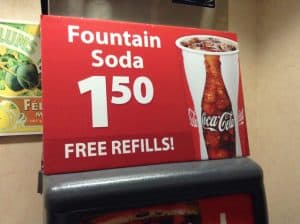 In addition, a soda fountain and restaurant might have its own filters to further clear away the tap water before it’s mixed with the soda ingredients. Overall, filtered tap water is nothing to be afraid of and most soda produced in factories uses the same kind of water, just filtered to an extreme degree.

There are filters that use activated carbon to absorb particulates, mechanical filters or screens with very small holes to prevent solid matter from passing through, ion exchange units to reduce the presence of hard metals like lead in water, and even ultraviolet treatments.

These last treatments kill any excess bacteria inside the water and can prevent the spread of disease.

In many cases, all of the above technologies are used in conjunction to make sure that the water given to the public is of good quality. These technologies are the same kinds frequently used in many home water purification filters, such as those which attach directly to the faucet or to the interior of a pitcher.

Carbonation is Added To the Water of the Fountain Drink Machine

The process is relatively simple. Carbon dioxide gas is typically mixed with very cold tap water in a high-pressure environment. This environment is sealed to maintain the pressure correctly. But how pressurized?

About seven times the normal atmospheric pressure! That’s a lot of pressure, but soda fountains are well constructed to keep the pressure tanks hidden deep within the machine and secure so that they don’t accidentally explode and vent their high-pressure carbon dioxide into the restaurant. 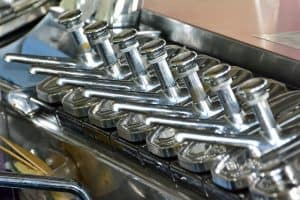 It’s for this reason that you might notice that soda fountain soda often bubbles just a little bit more than the normal can or bottle that you could buy at the grocery store.

Although it has been “carbonated”, the water inside the soda chamber hasn’t yet gotten its buzz. That part comes when the carbonated water is released into the mixing chamber where it’ll interacts with a normal atmospheric pressure level. The carbon dioxide in the water will attempt to escape and become bubbly as a result.

How Do Soda Fountains Work?

This carbonated tap water is then mixed with different flavored syrups to create the soda that is dispensed beneath the colorful nozzles at the receiving area. In most soda fountains, the various syrups and flavors are connected to the soda water via plastic bags hooked up to tubes. 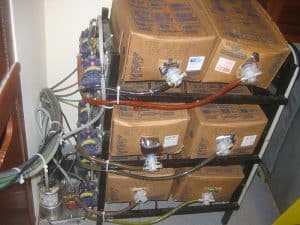 When a customer pushes the lever for a given variety of soda, the flavoring is pulled downward to mix with the following soda water just as it emerges from the dispenser. The mixing happens right before your very eyes even though it’s hidden just beyond view.

The soda water is kept icy thanks to the ice bin that’s normally constructed at the top of a standard soda fountain. This ice bin is also where the ice dispensary gets its supply.

Most soda fountains have as many flavors as they can fit bags into the apparatus above the dispensers. This usually works out to between eight and a dozen depending on the size of the machine and how popular certain flavors might be; it’s not uncommon for soda fountains to double up on the classics like Coke.

Still more advanced soda fountains have innovative interior spinning apparatuses that allow their owners to store dozens of soda flavors and types all at one time.

They use larger tanks of carbonated water and touchscreen interfaces to let people mix and match different soda flavors to come up with their own favorite soft drinks. These are usually found in malls rather than restaurants due to their larger size.