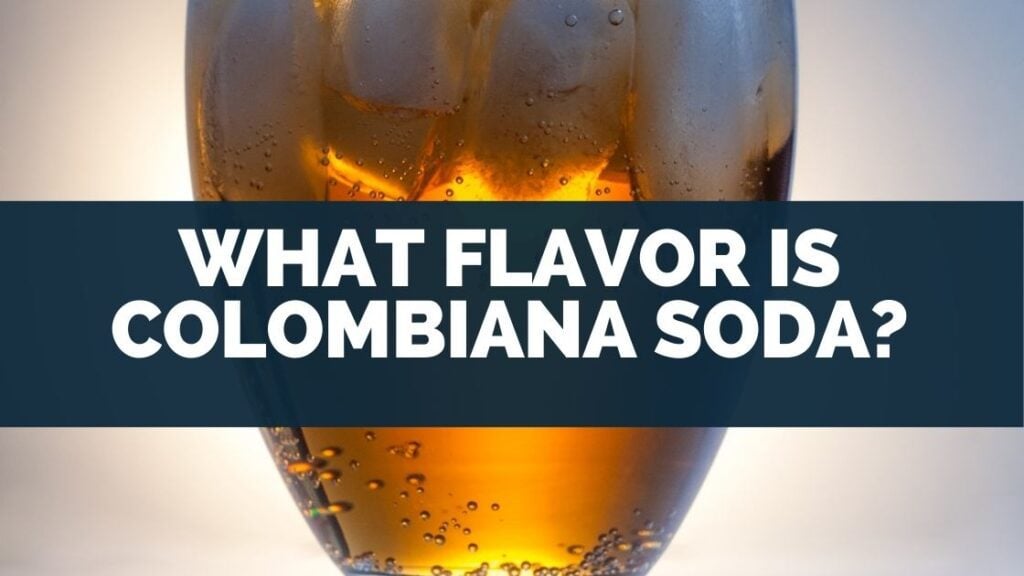 I came across Colombiana soda and it’s not a soda I’ve tasted yet but it got me wondering.

After doing some research I thought I’d put together this article to explain what I found.

So, what flavor is Colombiana Soda? Colombiana soda tastes like a cream soda with hints of bubblegum.

A cream soda traditionally tastes like vanilla ice cream. Technically, Colombiana soda is a ‘champagne cola’, however, in some countries cola is used as the word for soda or Soft drinks, and a champagne cola doesn’t taste like cola.

The company that makes Colombiana soda has an interesting history, and I was wondering what’s in Colombiana soda, and how it compares to other popular sodas or sugary drinks such as Coke, and Pepsi.

Below I’ll explain all of this and more.

What is Colombiana Soda Flavor? 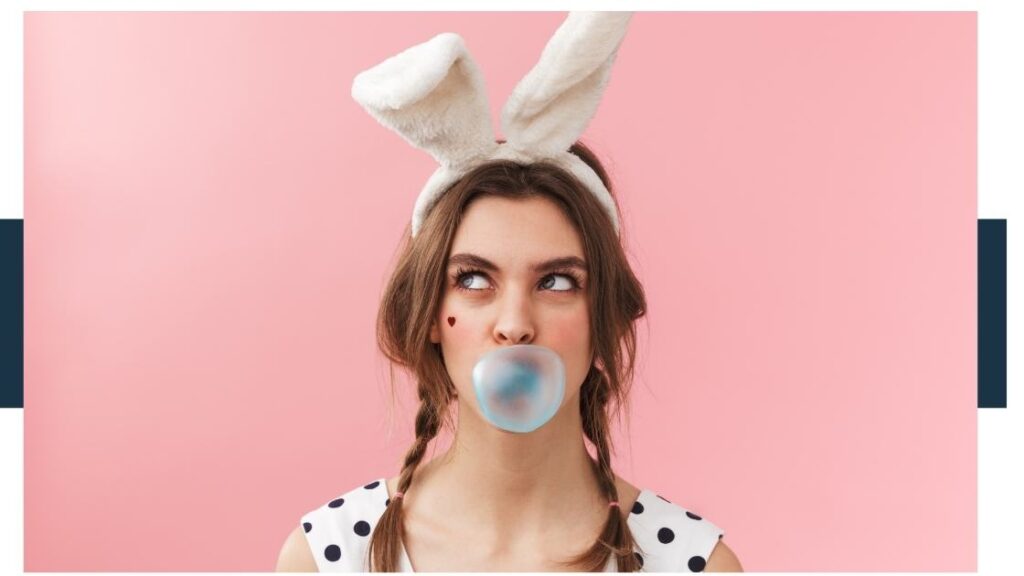 Colombiana soda tastes like a cream soda with slight hints of bubblegum. It’s a popular drink.

And most cream sodas are clear in color, however, Colombiana soda is orange.

There are some cream sodas that are red, or blue.

For example, the cream sodas made by Big Red.

And there is also a kind of cream soda called blue cream soda.

Because of the color, you’d think they taste like blueberry!

According to Wikipedia, Colombiana soda is a type of ‘champagne cola’ made famous by the largest soda producer in South America named Postobón, who provide detailed information about Colombiana soda on this page of their website.

The name champagne cola is somewhat confusing though because it doesn’t actually taste like cola.

And cola is the word commonly used for soda in some countries.

Champagne colas were invented in 1902 in Puerto Rico, by Ángel Rivero Méndez, as stated on Wikipedia.

Champagne colas are also popular in many other countries for example:

On Wikipedia it says that Cawy Bottling Company makes Iron Beer, however, this isn’t correct.

Iron Beer is made by Sunshine Bottling Company, as they state on their official website.

When was Columbiana soda made? 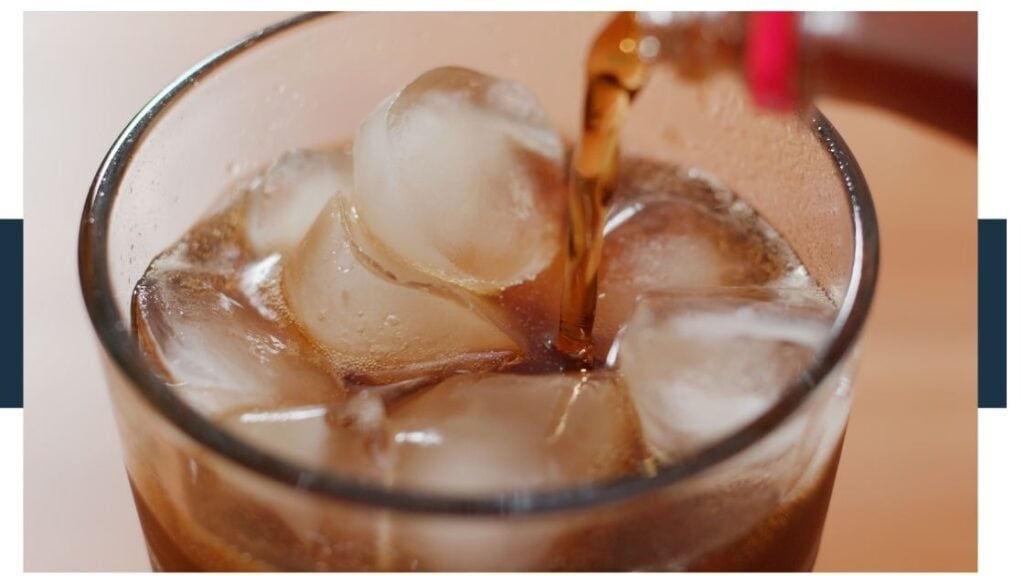 Colombiana soda was invented on October 11, 1904, according to the official website of the company that makes it, Postobón.

It was invented by a partnership between two gentlemen Valerio Tobón Olarte and Gabriel Posada.

And the first champagne cola was invented in Valerio that same year.

The website is completely in Spanish so I had to use Google Translate, however, it was invented in Colombia, a country in the north of South America.

Not to be confused with the District of Columbia in the USA.

Which is now abbreviated to Washington D.C. Or, Washington, District of Columbia.

The company that makes Colombian soda now has a large range of drinks, including flavored milk, and juice.

They also have an agreement with PepsiCo which began in 1980, which allowed them to produce and sell Pepsi.

Later in 1999 as part of their partnership with PepsiCo, they started to produce and sell 7Up.

And in 2002 they started producing Gatorade. 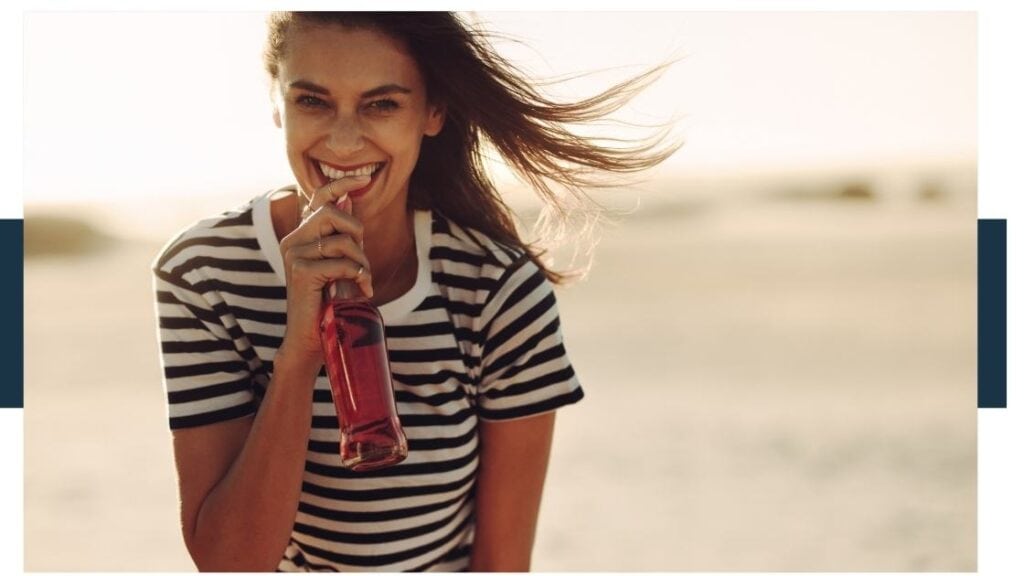 According to an Amazon listing selling Colombiana soda, the ingredients are:

The official website for Colombiana soda only has a sugar-free version of soda Colombiana and they don’t list the Additional flavors or ingredients.

The ingredients in Colombiana soda are almost identical to those used in other well-known sodas or Soft drinks like Coca-Cola and Pepsi.

The use of high fructose corn syrup in sodas

It was somewhat surprising to me to learn that Columbian soda is made using high fructose corn syrup.

Coca Cola by far is the largest seller of sodas in the USA, and 40% of all sodas bought in the USA are Coca-Cola brands, as shown by Statista.

The next largest producers of soda are PepsiCo and Keurig Dr Pepper who sell 20% each.

The remaining 20% is made up of lots of different small soda companies. 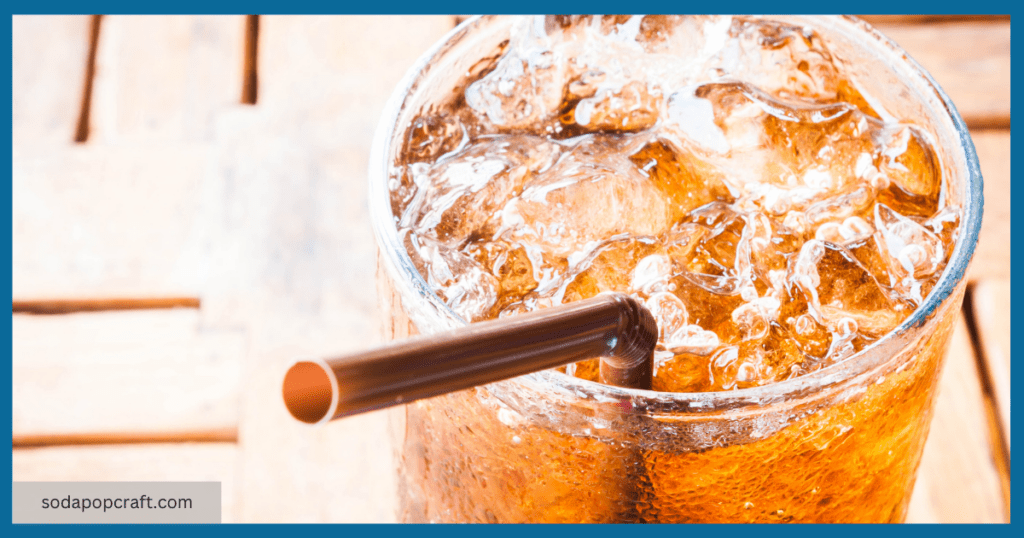 Coca-Cola produced in Mexico is made using sugar rather than high fructose corn syrup in sugary drinks.

And in English-speaking countries, Coca-Cola is made using high fructose corn syrup only in the USA and Canada.

Whereas, in the UK, Australia, and New Zealand they use sugar.

So, I thought that other Latin American countries would also use sugar.

People often wonder whether high fructose corn syrup is good for you.

And I covered exactly what it is, and whether it’s bad for you in [this: link, Does Coca Cola Use Corn Syrup?] article. 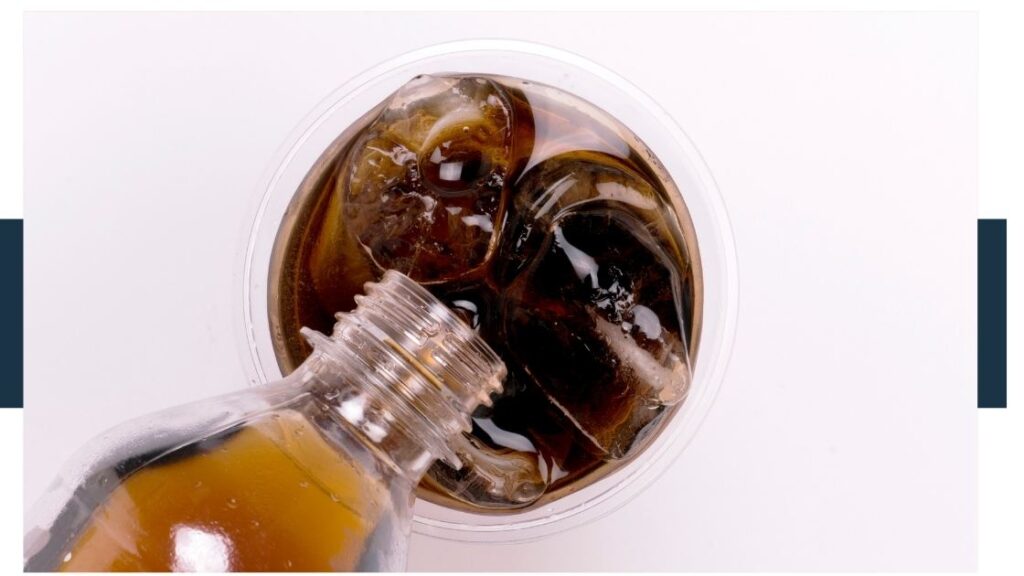 However, the producer of Colombiana Soda, a company called Postobón, only lists a sugar-free version of Colombiana soda on their website, and they don’t list the ingredients.

Some sodas for example Mountain Dew contain caffeine, but the amounts are NOT very high.

According to the FDA and Mayo Clinic, the recommended daily intake of caffeine is 400mg.

Therefore, you could drink 10 cans of Mountain Dew before reaching your daily caffeine limit as per Nutrition Advice.

By comparison, a cup of caffeine contains 100mg of coffee.

Therefore, you can drink 4 cups of coffee before getting close to the recommended daily limit.

In the case that the sugar-free version of Colombiana soda does contain caffeine my best guess the amounts aren’t very high.

Which is healthier Colombiana soda or Coca-Cola? 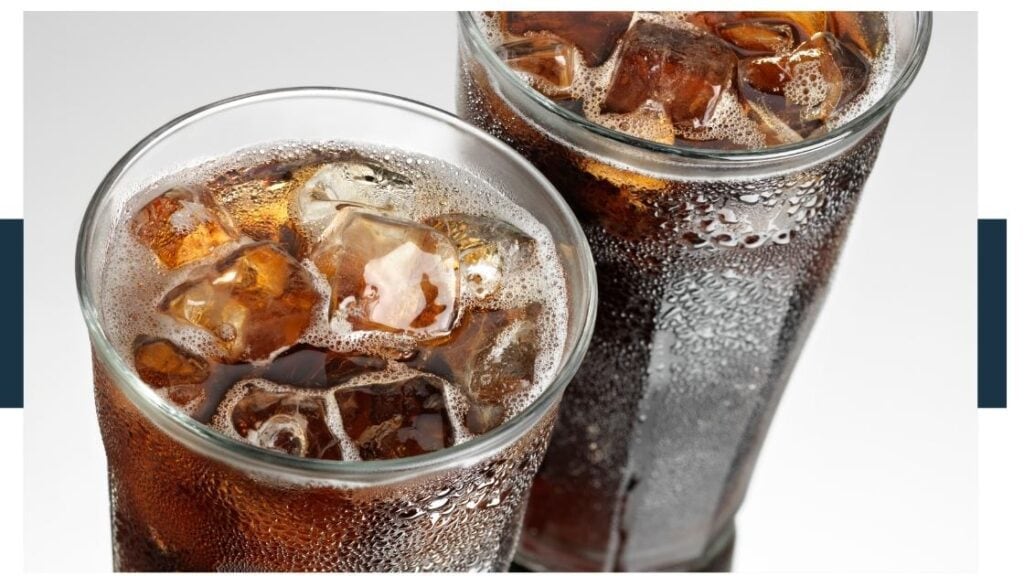 Colombiana soda has sugar and calorie levels similar to Pepsi, and Dr Pepper.

According to Harvard Medical School, the recommended daily intake of sugar is 2 tablespoons, which is equivalent to 28g of sugar.

And anything beyond that increases your risk of heart disease and cancer.

Here’s a side-by-side comparison of the popular sodas and Columbiana drink or Colombia soda:

Links to the data provided by the USDA can be found here: 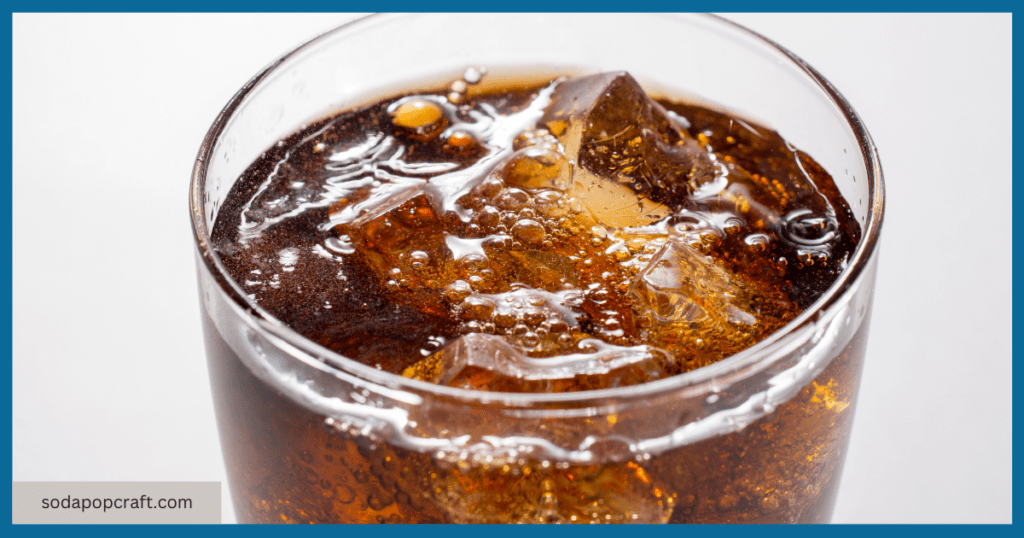 So, to stay under the daily recommended intake of sugar you shouldn’t drink more than 2 cups.

Also, these sodas are a better option than Coke if you’re trying to cut down on calories.

Here’s a summary of the main points covered in this article:

Colombiana soda tastes like a cream soda but is what’s known as a ‘champagne cola’ in various parts of the world.

Colombiana soda is made and produced in Colombia (the country) by the company Postobón and was invented in 1904.

It contains similar ingredients like Citric acid, artificial flavors, and sodium benzoate, to other well-known sodas like Coke, and Pepsi.

Colombiana soda does not contain caffeine.

And it contains about the same amount of sugar and calories as Dr Pepper and Pepsi. However, it has considerably less sugar than Coca-Cola.