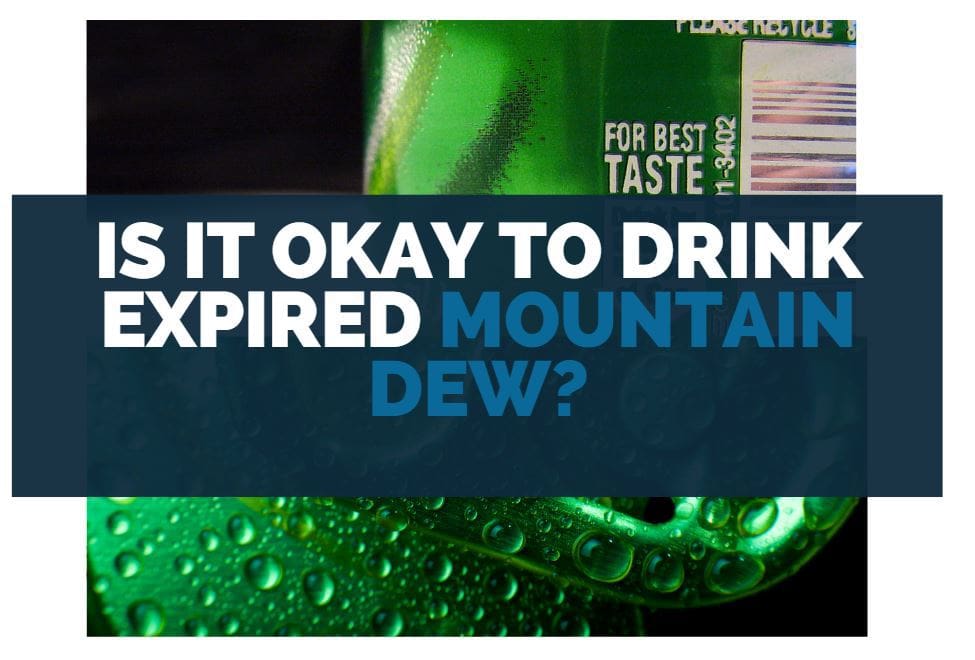 Mountain Dew is one of the most popular soft drinks on the market, right up there with Coca-Cola, Pepsi, and Dr. Pepper.

In their own words many people like the high-octane taste and high caffeine content of Mountain Dew and it has achieved a kind of niche following among gamers.

But, what happens if you drink bad Mountain Dew?

Is it ok to drink expired Mountain Dew?

Yes, it is safe to drink an expired Mountain Dew. Sodas are generally considered non-perishable goods, so even if you drink them after the expiration date on the label, you won’t get sick and nothing bad will happen to you.

Those expiration dates on soda bottles like Mountain Dew are for flavor and taste, not whether the beverage is safe to consume. They are more a kin to a best before date.

If you drink an expired Mountain Dew, it may have lost carbonation and some of its flavor, but it will not harm you.

Mountain Dew does not contain any ingredients that will make you sick if expired and there is no risk to drinking expired soda in general.

The worst thing that will happen is you drink what would appear to be a watered-down flat Mountain Dew.

In fact, most expiration dates are estimations, not strict time limits.

If your Mountain Dew is a few days past the expiration date, you can drink it and it will taste normal.

Even if it is a few months after the expiration date, it will not hurt you and probably will just taste kind of flat.

Like most soda cans and bottles, Mountain Dew puts the expiration date on the bottom or side of the container.

How Long Does it Take Mountain Dew to Expire?

Most of the time, Mountain Dew has as a shelf life of a few months to a year.

Even if the expiration date has passed, Mountain Dew still should be safe to drink.

It may be flat and have lost some of its flavor though. You can drink Mountain Dew up to 6 months after its expiration date and most of the time it will be fine.

Some people even report drinking 5-year old cans of Mountain Dew and they still taste fine.

If you have a can of expired Mountain Dew, here is what you should check.

First, check to make sure the can is still pressurized.

If it is, it will still be hard. If the can still is pressurized then that means all of the carbonation is still intact, which means it is likely that the drink will still taste relatively normal.

If the can has lost its pressure and is soft, then you should throw it away.

Not because the Mountain Dew has gone bad, but that means that there is a leak in the seal and other bad things lie bacteria and microbes may have gotten in and contaminated the drink.

If the can is still hard, then it should be perfectly safe to drink, it just may not taste as good as normal.

Where you store the soda can also affect how quickly it goes bad. Storing soda in hot places can cause it to lose its flavor and carbonation quicker than cold storage.

Also, if the container is damaged it can cause the drink to expire quicker.

What About an Opened Bottle of Mountain Dew?

Say you opened a bottle of Mountain Dew, put it in your fridge, and forgot about it for 6 months.

Would that still be safe to drink?

Probably not. If you have previously opened a can or bottle of Mountain Dew, that effectively nullifies the expiration date.

When you open a soda can or bottle, it loses much of its carbonation as the bottle or can is open to the outside atmosphere.

While it is unlikely that drinking an opened bottle of soda past its expiration date will harm you, there is always the possibility that the drink has been contaminated with something from outside.

An opened bottle of soda will generally keep its flavor for a few days while a can will lose its flavor in about a day.

This is because you can put a bottle cap back on and keep some of the carbonation in. Opened cans of soda, on the other hand, will go bad within a day or two.

Is the Same True for Diet Mountain Dew?

The story is slightly different for Diet Mountain Dew. Most regular non-diet sodas are made with sugar, which has a relatively long shelf life.

However, most diet sodas nowadays are made with artificial sweeteners like aspartame.

So if you have some diet soda that is 3 months past the expiration date, odds are the artificial sweeteners have degraded and the drink will taste bad.

Still though, drinking an expired diet soda probably won’t harm you; it will just have an unpleasant taste.

Mountain Dew is one of the most popular sodas in the world, and for good reason.

Even if you happen upon an expired can of Mountain Dew, drinking it won’t hurt you and you won’t get sick.

Mountain Dew can normally last up to 6 months after its expiration date.

If you drink expired Mountain Dew, the worst thing that will happen is you drink a nasty-tasting soda.