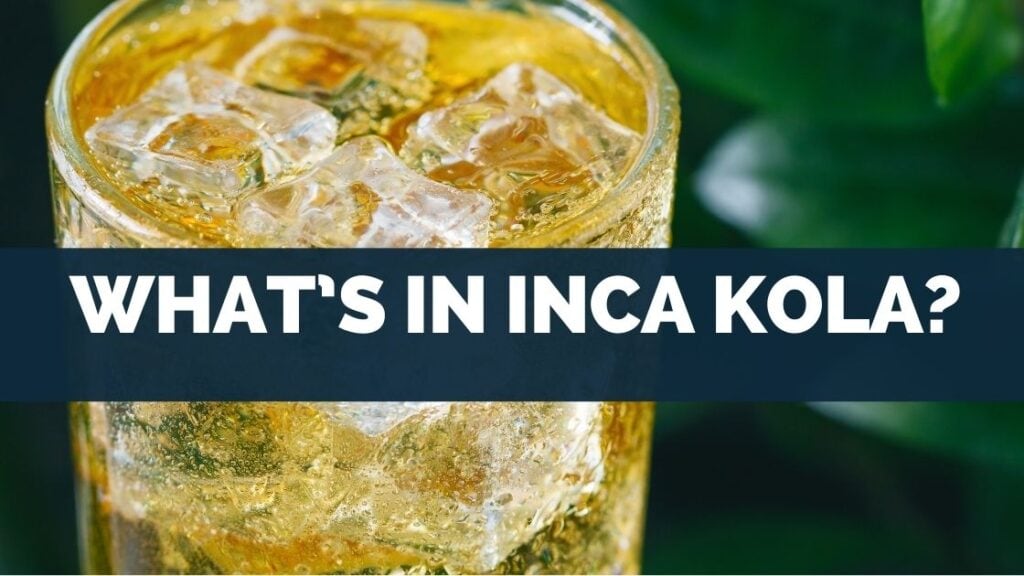 Inca Kola is a unique drink that was created in Peru in 1935 by Joseph Robert Lindley (José R. Lindley) and has remained one of the most popular drinks in Peru.

Later on(in the late 1970s), the grandson of José R. Lindley, Johnny Lindley Taboada came to be known as chairman of the joint venture between Inca cola and market leader coke.

If you visit Peru, you will have ample opportunity to try this unique beverage of José R. Lindley as its sold in most stores across the country.

But let’s get into it, what exactly is Inca Kola and what is Inca kola made of?

Inca Kola Bottle contains many of the same ingredients as most other soft drinks and carbonated drinks on the market today, which is no surprise.

If you exclude its unique yellow color, the recipe is very similar to that of Coca-Cola(a bottling company).

Inca Kola is a very unique drink that is sold almost entirely in Peru, and it has an interesting backstory.

Let’s read on for more information!

What Is Inca Kola? 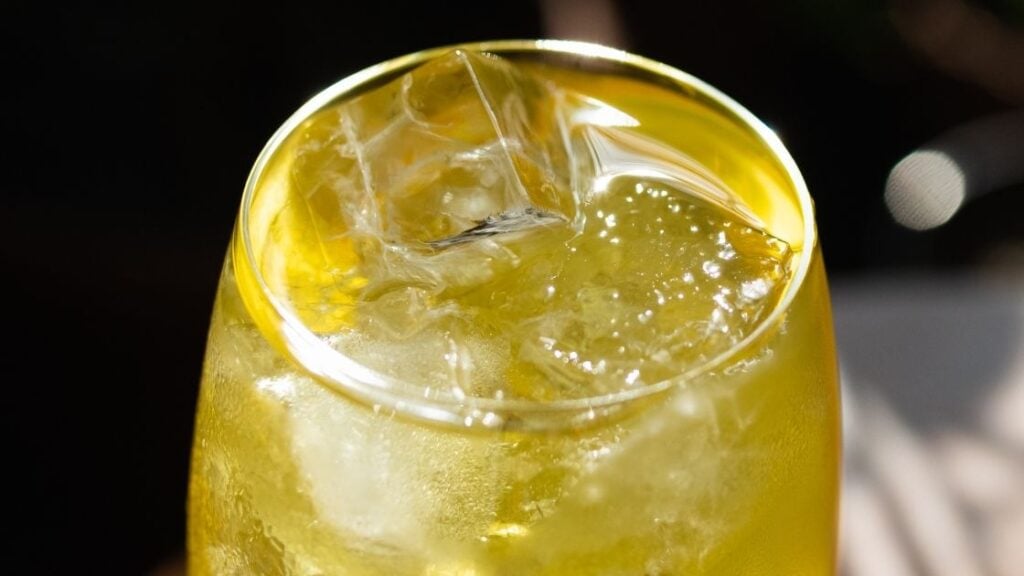 In Peru, the word “Cola” is associated with a dark-colored soft drink or carbonated beverage made with Cola bean which is called “Cola Negra” in Spanish.

This is the classic English definition of this word to a certain extent as well.

The word “Cola” can also mean soft drink, sort of like how people refer to all facial tissue as “Kleenex”.

Cola in Spanish can also mean lemonade and other drinks and it has a generally much wider meaning than in English.

Tagging the soda with the word “Inca” helped to define it as different from other Coca-Cola products back in the early days of the company before Coca-Cola Co. actually did own Inca Kola.

The competition between other Coca-Cola company brand products and other sodas has always been fierce.

Inca Kola staged its own “war” against Coca-Cola company for many years before becoming a part of the giant company in 1999.

The intense nationalism that surrounds the drink would not have been possible without associating it with the title that it now holds.

Being a cola that is uniquely Peruvian was an important part of the drink’s marketing engine as well as its promotion.

The drink is also uniquely colored and flavored as a means to separate it from other mainstream colas and make it stand out as its own unique product.

Inca Kola now stands for more than just a soda or carbonated beverage, and that was the original intention of the naming convention as well as the representation of this soda during the early years of its marketing development.

Inca Kola itself does not mean what the branding process of the drink came to mean to people living in Peru who are passionately in support of this soda that belongs to them.

Does Inca Kola Have Alcohol? 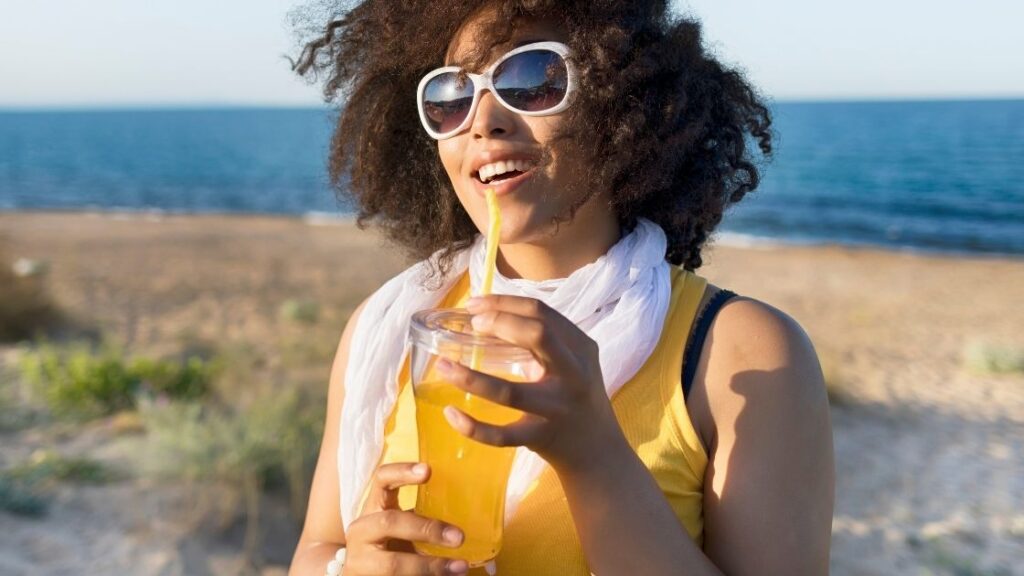 Inca Kola is not alcoholic but it is used in some mixed drinks in places other than the US. In the United States, it is far more common to use regular Coca-Cola due to its color than anything else.

The Inca Kola’s unique citrusy sweetness can make it challenging to pair with some alcohols, so mixed drinks which include it are not all that common.

The Inca Kola’s bright yellow color can be off-putting to some consumers and in the US there are very few sodas that come in anything other than a dark brown color or clear variations.

Bright yellow drinks are often most closely associated with energy drinks or Mountain Dew in the United States and it can be very confusing for some consumers to experience a Cola that is not dark in color or liquid bubblegum flavor.

Inka cola is often explained as a soda that tastes a lot like Coca-Cola(a refreshing beverage) with a slightly shocking color that takes some time to get used to.

The reason that Inca Kola is not used in more mixed drinks is likely related to its color more than anything else.

Does Inca Kola Have Caffeine? 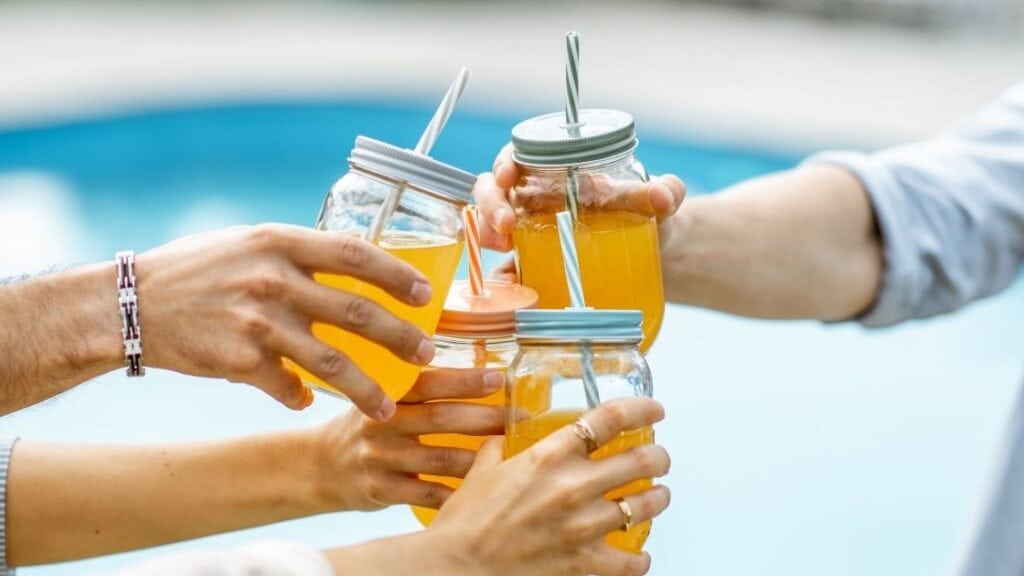 Yes, there is caffeine in Inca Kola Bottle at the rate of 3.17 MG of caffeine per fluid ounce with Artificial colors.

Inca kola caffeine offers a nice little pick-me-up if you are drinking it in the middle of the day.

A can of Red Bull has 80 MG of caffeine compared to the 38 MG total that Inca Kola contains in a 12 oz can.

Coca-Cola contains 39 MG, so the two products are very comparable as far as caffeine content.

Many sodas have caffeine, and Inca Kola, or the official soda of Peru is able to impart this often desired little bit of energy and distinct flavors to those who drink it on a daily basis.

What is the Most Popular Soft Drink In Peru? 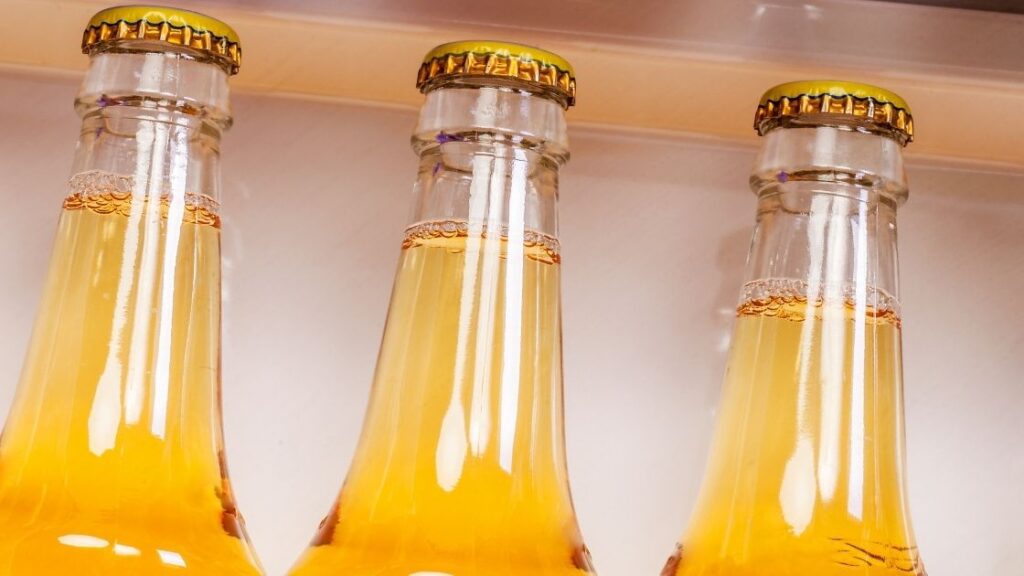 Inca Kola is the most popular soft drink or classic lemon-lime beverage in Peru.

Peru loves this classic Peruvian drink and prefers it to regular Coca-Cola products which are also sold there.

This is partially due to the flavor profile but also due to the intensely nationalistic promotion tactics that were undertaken by the company during the mid-1940s until Coca-Cola took over ownership in 1999.

Regular tea is very popular in Peru and tops the list of the most popular drinks overall, but Inca Kola is the most popular soft drink due to its affiliation with national pride and identity.

A big part of the early marketing plans and strategies for Inca Kola included a direct bond between national identity and this one kind of drink and Inca Kola remains bonded with Peruvian identity in a way that many other products cannot hope to achieve.

Other Popular Drinks in Peru 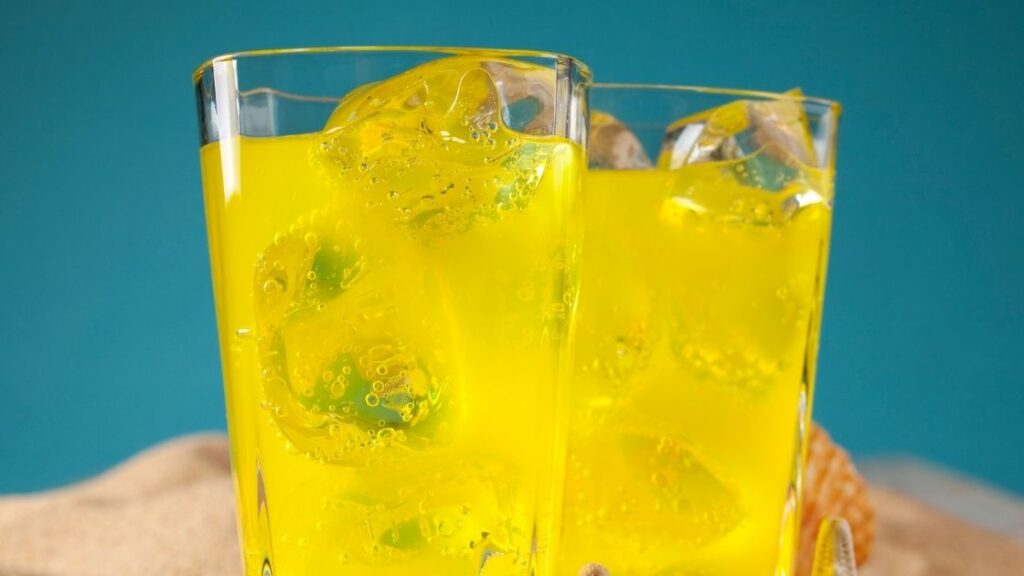 Inca Kola is not the only popular drink in Peru.

There are many traditional classics that visitors just have to try when they come to Peru.

Peruvian drinks often draw heavily on Incan traditions, so there are many very unique drinks that are traditional to each region that you should not miss out on when you visit.

This is a lovely cocktail that is so popular it even has its own holiday!

Pisco is a type of brandy that is very strong, mixed with a fruity concoction of lime, simple syrup, an egg white, and some Angostura Bitters.

This is a non-alcoholic drink that is very popular throughout Peru.

Made from dried Peruvian purple corn, this drink has a distinctive purple color and can be experienced in restaurants as well as purchased in stores.

This is a traditional Incan herbal tea that is made by steeping coca leaves in hot water.

This is a very controversial drink, but you can get it in many places in Peru.

This tea is often used to treat altitude sickness in Peru and has been a health drink for centuries in this area of the world.

This is a medicinal drink that is often sold by street vendors in Peru and it is considered a good source of health benefits.

It can be served warm or hot per your preference.

Inca Kola is an acquired taste for those who are used to dark colas and other types of soft drinks.

Many people describe it as having a fruity flavor reminiscent of bubble gum.

This Inca kola flavor profile seems to pair well with the unusual bright yellow color of the drink, but its stark yellow(Golden Kola) appearance can make you expect that the drink will taste more like lemon than it really does.

Some people claim it reminds them of cream soda while others say that they taste the included lemon verbena natural flavor the most strongly of all the included components.

For many people, the blend of bubble gum sweetness and lemony freshness is quite refreshing, even if it is different from dark sodas that are common in the United States and Europe.

This is a unique drink and many people react strongly to its taste.

It is quite common for people to love Inca Kola or dislike it intensely.

The intense sweetness is not a standard and national flavor profile for American sodas, so those who are expecting it to be like an American soda will likely be disappointed in the taste at first.

Does Inca Kola Have Health Benefits? 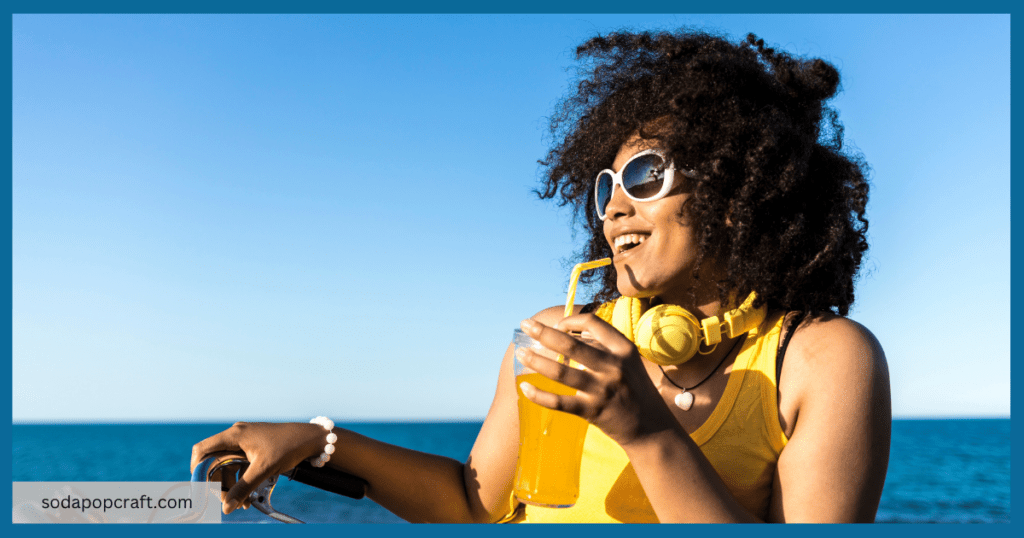 Inca Kola does not offer unique health benefits although its caffeine content can help you to stay awake when you are drowsy.

Inca Kola is often associated with improved digestion, much like Sprite or other kinds of soft drinks in the US can be, but that is not supported by studies.

Inca Kola is mostly an enjoyable drink that you can add to your meal or put in your fridge to pair with your favorite snack, but it is not a healthy drink.

This is often a claim that people will make related to different kinds of sodas or mass-marketed drinks, but Inca Kola makes no such claims about their product.

If you have never tried it, Inca Kola is a really unique and enjoyable drink to experience.

You may have to travel to Peru to try it out, but it should be on the list of things that you plan to do when you visit this unique and beautiful entire country.