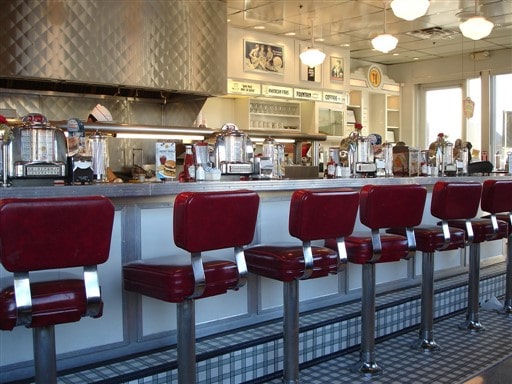 But although Coca-Cola Company, Pepsi, and Dr. Pepper are all staples across the country, the smaller soda brands tend to phase in and out of popularity in the beverage industry.

The up-and-coming sodas this year likely aren’t the same that was popular in the 1960s in select markets.

So what sodas were popular in the 60s?

Overall, the most popular soda brands in the soft drink industry in the 1960s are widely recognized as Coca-Cola and Pepsi.

But while Coca-Cola Company and Pepsi company managed to sell the most units in the 1960s and the decades beyond, smaller soda brands like 7-UP, Fresca, Moxie, Mountain Dew, Bubble-Up, RC Cola, Jolt Cola, Vernor’s Ginger Ale, White Rock, and Buffalo Rock were all varyingly popular as classic sodas in that decade.

Here is my run down.

In fact, it’s safe to say that the 1960s were a more diverse year for soda popularity than many other decades since.

As time has passed, Soda Companies like Coca-Cola Company and Pepsi have absorbed more and more small soda companies and phased out many brands that did not perform as well as their competitors.

This has resulted in a narrowing of the sodas available in major markets.

Nowadays, you can only find some of these soda brands in specialty stores. Also, there are bottled water, flavored water, and carbonated water are readily available in the market.

Coca-Cola vs. Pepsi: Who Won? 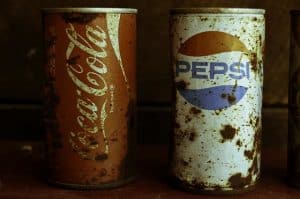 As marketing efforts between both Coca-Cola Company and Pepsi started ramping up speed and intensity, the battle for dominance in the hearts and minds of the world became even more important for both companies.

The 60s were also a period of intense television entertainment growth, especially as it related to advertising and consumer awareness.

As a result, Coca-Cola and Pepsi both began developing extensive marketing campaigns for popular drinks using television and other avenues to convince consumers to buy their sodas as opposed to their competitors.

Smaller soda chains tried this as well, but without as many marketing dollars, they were less successful.

Although Coca-Cola was the market leader in many respects at the beginning of the 1960s, Pepsi was right on its heels and managed to compete directly against the Coke juggernaut thanks to the development of the soda vending machine.

This development allowed people to find their favorite soda beverages in more places than before and Pepsi took full advantage of this new way to reach consumers.

This easy access to Pepsi gave the brand a major boost and allowed it to go toe to toe with Coca-Cola, which was doing the same thing with its 5-cent price.

But Coca-Cola retained much of its market dominance and was not unseated by Pepsi.

Pepsi’s real superiority would only develop with the rise of New Coke in the 1980s.

Overall, Coca-Cola and Pepsi were the two most popular soda 1960s soda brands by major margins.

However, their popularity was not as ubiquitous as it is today.

This is largely due to the wide variety of other, smaller soda brands like Foxon Park and Orca Beverage that competed amongst themselves and were not yet absorbed by the two juggernauts.

Other Old Soda Pop Brands of the 1960s

While Coke and Pepsi had their marketing war, many other smaller soda brands managed to develop and flourish for a time and be enjoyed by many people in the 1960s. 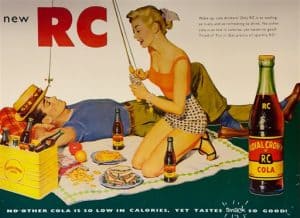 RC Cola was developed in 1905, making it one of the oldest soft drinks ever invented (check out what the oldest is here).

RC Cola saw great success in the American South, beat both Coca-Cola and Pepsi, and developed a diet version of its main soft drink in 1958.

RC Cola is also notable in that they were the first company to sell soft drinks in a can in 1954.

Sprite is perhaps the world’s most famous lemon-lime soft drink.

A soft drink company developed it in 1959 in West Germany, but it only came to the United States in 1961 to directly compete with 7-Up.

Sprite ended up winning the battle thanks to a concentrated marketing campaign and a better flavor balance compared to its competitors.

Orange Crush was one of the earliest orange-flavored soft drinks that saw a lot of consumption in the 1960s and a few decades later.

This Citrus Soda was developed in 1911 and quickly expanded to different flavors of the overall “Crush” brand.

There are varieties of Grape Soda like Grape Crush and so on. Fruit juice, like Orange Crush, is still being developed today, along with many of its accessory flavors.

Fanta was and is Orange Crush’s primary competitor of Orange Soda.

It also served the Coca-Cola Company as a substitute during the 1940s when America embargoed Nazi Germany and the sugar trade ground to a halt across the world.

As a result, Fanta really side’s heyday in the 1940s and 50s before Coca-Cola came back into the mix. While it was decently popular in the 60s, it never regained its earlier success.

7-Up was one of the earliest lemon-lime soda pops.

It was originally introduced in 1929, just before the Wall Street crash that led to the Great Depression.

Like Coca-Cola, 7-Up had a drug in its formula called lithium citrate, which was supposed to stabilize your mood until 1948.

Although 7-Up eventually fell behind sprite in terms of popularity and consumption, you can still find 7-Up today.

Fresca was introduced in 1966 and quickly became one of the 60s most popular grapefruit-flavored soft drinks.

The name directly refers to the Spanish word for “fresh” and saw a lot of popularity since it wasn’t as sugary sweet as other grape sodas of the time.

Mountain Dew saw its introduction in 1940 by a pair of soft Tennessee beverage bottlers.

Eventually grew until the Pepsi-Cola company noticed it in 1964, which is when its popularity started to take off. Due to its high amount of caffeine and sugar that makes it times sweeter, Mountain Dew saw a lot of consumption among younger kids and teenagers.

Bubble-Up was introduced in 1919 and is a much smaller lemon-lime soft drink than many others.

Although it saw modest success during the 1960s, it lost its chance for real growth and development since the company fell into bankruptcy in 1970.

You can only get Bubble-Up soda in local regions around Indiana and other states.

Veep was another lemon-lime soda pop and was produced up until 1964. But Sprite quickly took over the lemon-lime market, and Veep was not able to compete in the same way that 7-Up was.

Soda Dispensary Developments in the 60s 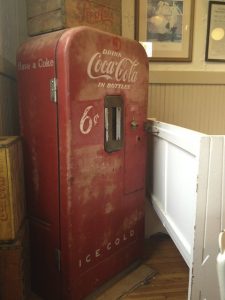 The 1960s were a time when the ways that people drank soda began to shift. In 1965, soda vending machines were first introduced, and soft drinks in cans became explosively popular soon afterward.

This allowed Pepsi to maintain its battle against Coke and helped soft drinks as a whole spread throughout the United States and the world.

But vending machines relied on two major developments before they could take off.

The first was the development of the aluminum can for soft drinks.

This was created in 1954, although it took several more years to realize the full potential of portable aluminum cans.

The development of the Pop Top can succeed the disposable soda can in 1963.

This allowed people to open their ice-cold soda without the assistance of a specific opener at the soda fountain. Once again, this improved portability of soda pop greatly.

The development of disposable cans meant that you could take your soda with you in a more portable fashion and didn’t have to worry about the glass of the traditional soda pop bottle breaking in your bag.

Allowing you to enjoy a  fizzy drink on the go.

Until the 1970s introduced plastic bottles, aluminum cans were the best type of soda bottle packaging.

The 1960s also saw the development of diet soda.

As weight loss became a concern for more and more people, soda companies capitalized on the trend and decided to create a soft drink that would taste sweet and satisfying without having as much normal sugar or fewer calories.

The first diet cola was sold in 1958, but it wasn’t until market researchers discovered the possible untapped consumer market surrounding the lower-sugar drink that the development of new pops really took off.

While diet drinks never overcame the full-sugar variants of their parent beverages, their influence over the market can’t be understated.

One of the earliest efforts at tackling the diet soda market was Patio.

Although the name is quite different from Coca-Cola, Patio was still developed by Coke’s larger parent corporation as a secondary soft drink that you could consume with your friends if you were worried about your waistline.

While Patio didn’t do very well on its initial run, the soda was eventually picked up by Pepsi and became the well-known Diet Pepsi.

Even though Diet Pepsi sold well, it took Coke until 1982 to develop their own signature diet soda pop to accompany their main Coca-Cola.

They have, of course, added many other varieties over the decades, such as Tab Clear, Coca-Cola Zero

Diet Pepsi had been around for so long that Coke failed to capture nearly as much of the diet-drinking market by this point.

Diet drinks have remained consistently popular ever since their first introduction.