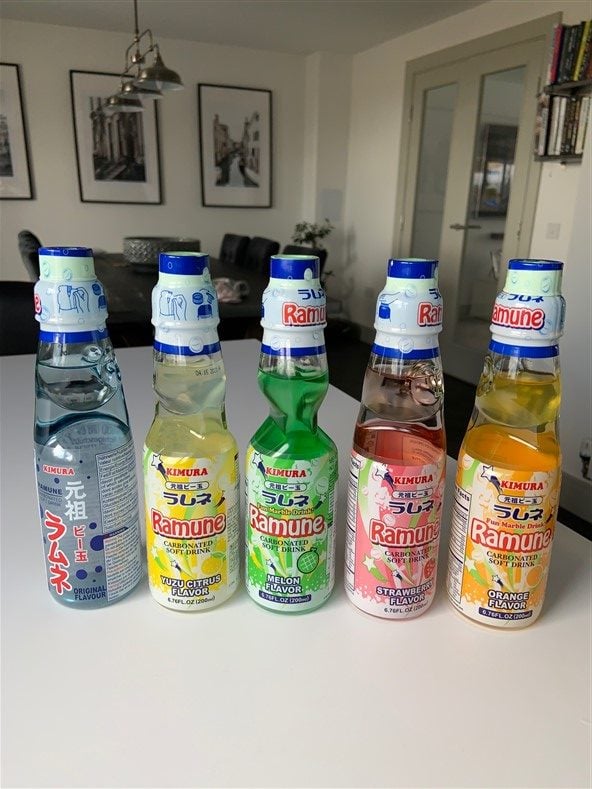 Ramune Soda ( also known as marble soda) has a special packaging process that gives it a distinctive look and opening technique.

The presence of marble instead of a regular cap has cemented Ramune as one of the most interesting sodas in the world and marks it as a favorite of both children and adults alike in Japan and across the western world.

So why do they put a marble in Japanese soda?

They put a marble in Ramune Soda to create a seal to keep carbonation inside the bottle, which also gives the soft drink a longer shelf life. Hiram Codd invented this technique in 1872.

Unlike a traditional bottle of soda, the marble is used like a cap that serves to keep your soda fizzy as both the marble and bottle are made of glass which is not permeable (it retains carbonation)

This special bottle style (called “Codd-neck bottle”) is hardly found anywhere else and helps to lend Ramune a special appearance.

The marble drifts around in the soda once it’s been released from the top, tinkling on the glass bottle like a small cube of ice.

Ramune is a unique take on the typical soda bottle, and the marble makes it stand out from the crowd. So, it has a Distinctive Design.

This is particularly important in today’s crowded soft drinks market since so many different competitor sodas are competing to be different.

What Is The Marble In Japanese Marble Soda Made Of?

The lemon-lime soda Ramune is a popular summertime drink in Japan and has spread to worldwide markets.

It was originally developed in the mid-1800s and quickly gained popularity alongside other sodas or carbonated beverages being developed all over the world.

Its base flavor is a lemon-lime taste reminiscent of Sprite and other soda varieties, although a few other fruit-based flavors are available. 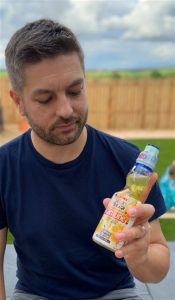 The marble in Ramune is normally made of glass, although some bottles occasionally have a marble made of plastic or similar hard material.

Since the presence of the marble is just to keep the bottle of soda sealed until it’s ready for consumption, the marble is made to last for a long time and withstand many months or years on the shelf before being tampered with.

The marble is made of glass in most cases, similar to the vast majority of marbles used in toys or games designed for children.

Because the marble will have to be pushed down with the plastic plunger, the glass design of the piece allows it to withstand this sudden change in pressure and force without splintering or breaking off into smaller pieces that might contaminate the soda.

The glass marble is able to remain intact in a single sphere, even as the soda begins to fizz and bubble.

The sudden pressure release from the carbonation within doesn’t cause structural damage to the marble; this keeps the drinker safe, as glass isn’t edible!

The marble also excels at keeping carbonation inside the bottle thanks to the glass material.

Glass isn’t permeable in a way that rubber and other materials can sometimes be if left alone for a long period of time.

Glass also lacks a natural taste like rubber, so the marble doesn’t contaminate the flavor of the soda even if it remains in the liquid for months on end before being opened.

One final bonus of the marble being glass is the tinkling sound you can hear as the marble drifts about the bottle. It adds to the toylike and whimsical feel of the soft drink. 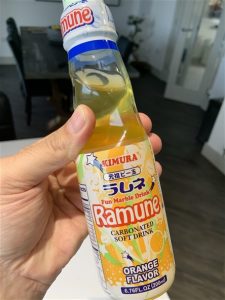 The marble has to be removed through the use of a special plunger that comes with each purchased soda.

The plunger is usually attached to the top of the cap in modern bottles.

Rinkers must push down on the cap, which is normally colored green, to create enough of an opposing force to push the marble down and release it from its seal at the top of the bottle.

The resulting force pushes the marble down into the soda and opens the top for consumption. All the drinker has to do is remove the green cap and start sipping.

There are also usually two different grooves on the side of a typical Ramune bottle where you’re supposed to hold the beverage.

Holding the bottle at those locations helps to distribute the marble down away from the cap, so it doesn’t plug the opening again.

Is The Marble In Ramune Marble Soda Drink Edible?

No! While the occasional marble may be sized incorrectly and fall out of the Ramune bottle once it’s been opened, the marbles are by no means edible and should always be kept out of the mouths of children and adults alike.

The marbles are made of glass and can break if enough pressure is exerted upon them.

The human jaw can bring hundreds of pounds of force to bear on any surface, and this is more than enough to shatter a glass marble, causing terrible damage to the inside of the mouth and the teeth.

Obviously, glass is not an edible material. 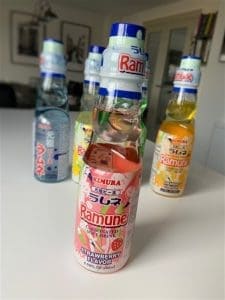 The issue is that most edible materials won’t form a good enough seal to keep carbonation inside the bottle and preserve the flavor of the Ramune for a long period of time.

There has been some research into using hard candy material to form the marbles; this development would allow children to fish the marbles out of their bottles once they open the soda and enjoy the marble as a secondary treat.

But this candy would need to be specially developed and likely installed in the soda bottle in a unique way to ensure that the soda seal remained intact and as good as the current glass marble.

In addition, such a development would require a heavy marketing campaign to educate the public on the new edibility of the special marbles.

Poor education could lead to people trying to eat the old Ramune marbles, which would be a disaster.

While some Ramune bottles may make an edible marble to attract further business, no bottles of Ramune from major retailers have edible types.

How Do You Get the Marble Out of Ramune?

The marble in neck bottles of Ramune can become a kind of cool keepsake, and many kids will likely want to collect the marbles to use in games or simply as souvenirs.

Thankfully, there is a way to get 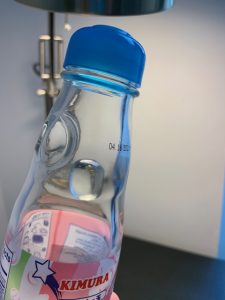 the marble out of an individual soft drink bottle. Don’t ever try to simply smash the bottle, as the danger of glass shards flying everywhere outweighs the benefit of retrieving the marble quickly.

The trouble is that the typical Ramune bottle is made of glass and is very tightly sealed. The marble is pre-sized so that it doesn’t fall out of the cap, which would present a choking hazard.

There are two types of Ramune caps: plastic and aluminum.

To remove the plastic cap, wash out the bottle thoroughly with soap and water before beginning to get rid of any sugary and sticky soda particles that might be left by the person who drank it.

This will loosen the seal of the plastic cap on the lid.

Next, stick the flat-head screwdriver into one of the incisions.

Work your arm around and apply some muscle power; the cap should come off relatively quickly. Removing the cap will create enough space for the marble to fall out of the bottle.

For aluminum-topped bottles, take the same two tools from before and make the same incisions as before.

The aluminum is usually quite soft and shouldn’t require a very sharp saw blade in order to make the cuts.

Either way, the flathead screwdriver should provide enough leverage to lift the cap off the bottle without too much difficulty.

What Does Ramune Mean in Japanese?

As Ramune was introduced to Japan in the 19th century by a Scottish Pharmacist Alexander Cameron Sim. It derived its beginnings from the soda waters that were starting to spread across the world market by entrepreneurs primarily from the West.

While it was originally developed in the 1850s, Ramune came into its own in 1888 when it began to be packaged in its iconic bottles.

The citrus-flavored soft drink needed a name, but the interactions between the Japanese language and Western inventors weren’t always perfect.

The name “ramune” came from the Anglicization of the Japanese pronunciation of “lemonade”.

The Japanese essentially called it remon sui, or “lemon water”. As this is an apt description for a soft drink or carbonated drinks, the name stuck but carried on the Anglicized spelling and pronunciation as it widened across the Japanese food markets and worldwide markets.

This name remains even though modern Ramune Soda creators make soft drinks in a variety of flavors.

You can now get Ramune Sodas in fruity flavors like orange, melon flavor, blueberry, and strawberry, as well as the classic lemon-lime.

Still, the brand name overrides the actual accuracy of the name as a whole.