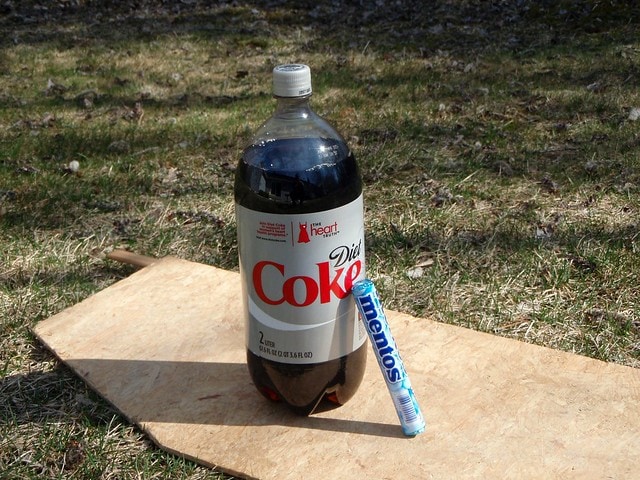 Almost everyone in middle school or high school has heard the urban legend: if you drink Coke and eat Mentos, you’ll explode!

Protected by fear, few kids actually end up attempting the stunt, even to prove their guts to their peers.

After all, it’s well known that dropping Mentos into a bottle of Diet Coke will cause a sudden geyser of soda foam to erupt.

So what happens if you drink coke and eat Mentos?

You’ll suddenly experience an upsurge of soda foam and will likely burp or vomit up large amounts of the stuff in seconds.

The sudden swell of carbon dioxide inside your stomach will need an escape.

This is the same thing that happens to any other container with volatile ingredients. 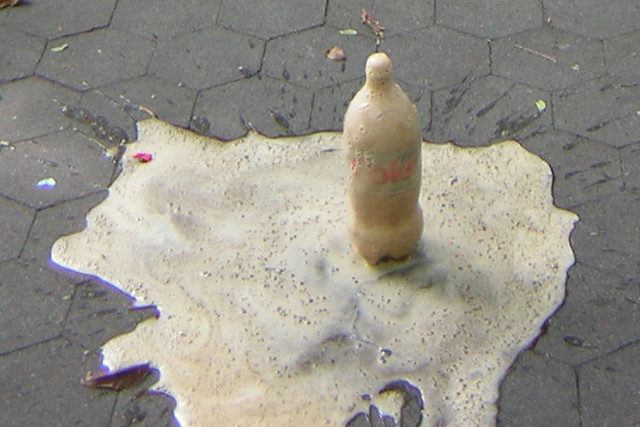 Swigging some Coke and swallowing some Mentos will essentially cause a lot of the carbon dioxide trapped in the soda in your stomach to suddenly bubble and try to escape.

However, your stomach is not enough of a seal to keep this sudden pressure change contained inside.

If this were the case, eating Mentos and drinking soda may indeed be dangerous.

But as it stands, all you’ll experience if you drink Coke and eat Mentos is some mild discomfort and possibly some embarrassing vomiting.

It’s not recommended to do this, even for a party trick, but you’ll survive with only your pride wounded overall.

IF you want your own Party Trick then try ths 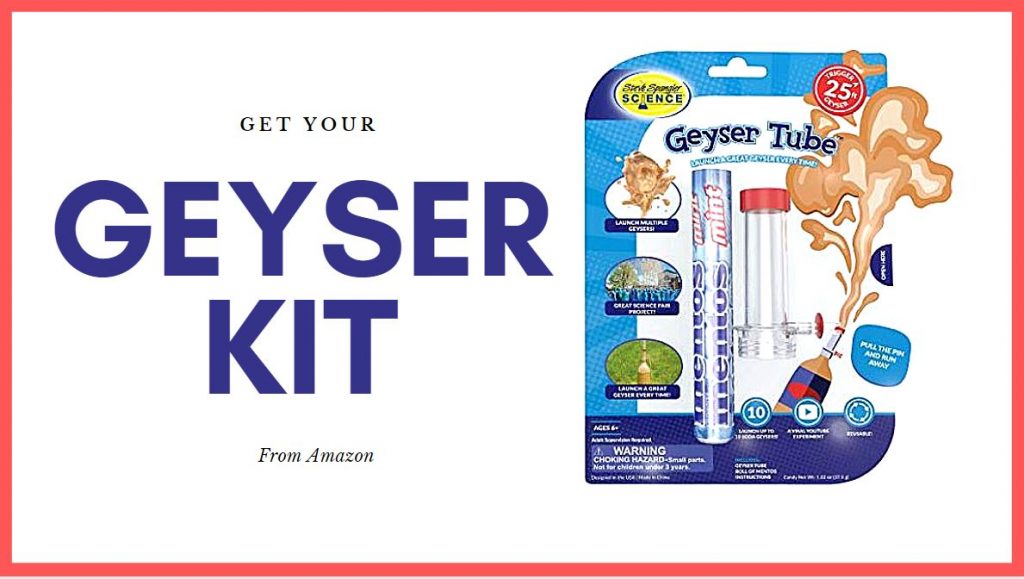 While there are many stories of people dying from suddenly exploding due to the rush of carbon dioxide expanding in their stomach, none of these stories are factually true and no video footage has ever been recorded of such an accident.

It is likely that these stories are exaggerated and have been spread on the Internet for entertainment purposes.

The Soda Geyser Effect with Mentos

In order to understand why Coke and Mentos react so explosively, you have to understand how both ingredients work in the first place. 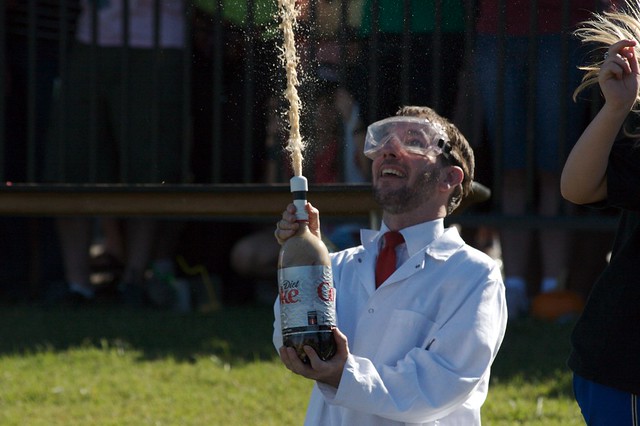 Coca-Cola is a carbonated beverage that is full of dissolved carbon dioxide.

The gas form of carbon dioxide bonds with the water molecules present in the cola. Most Coca-Cola is kept carbonated by a sealed bottle, which creates a pressurized environment where the carbonated gas can’t escape until the cap has been broken off or opened.

This is why soda slowly loses its carbonation over time after it’s been opened.

When soda is poured into a glass, most of the carbon dioxide remains trapped under the water (or liquid) thanks to its surface tension.

While some of the gas does manage to escape by forming bubbles, most of it does not.

The rest of the process happens thanks to the physical properties of Mentos.

In order for more carbon dioxide bubbles to be created, the bonds with the ambient water in the soda have to be broken.

Mentos has thousands of tiny bumps over its surface even though the candy might look smooth to the naked eye.

The rough surface of the candy creates friction where the heavier carbon dioxide molecules can sink and break away from their bonds with the water surrounding the. The carbon dioxide, once freed from its bonds, forms small bubbles that are lighter than water and which want to rise.

Imagine this small process happening thousands of times in the second and you get the trademark fountain of soda bubbles that rise out of the bottle.

This effect can be maximized to a certain extent by adding a few Mentos candies to a given soda bottle, although there is a breaking point where adding more candies doesn’t make the geyser any more impressive.

Why Does Mentos React With Soda?

As previously stated, the surface of Mentos candies is what makes this reaction work.

All of the tiny pores on a Mentos’ surface break the polar bonds between the carbon dioxide and the water, which is why any Mentos candy with a smooth surface fails to produce any reaction at all.

Since the Mentos merely facilitates the creation of bubbles, the candy will continue to act as a catalyst for carbon dioxide bubble formation until all of the surrounding CO2 has been exhausted in the bottle.

This doesn’t always cause a geyser to erupt out of a coke bottle; for instance, a Mentos candy cut into quarters will produce less of a reaction than a full candy. 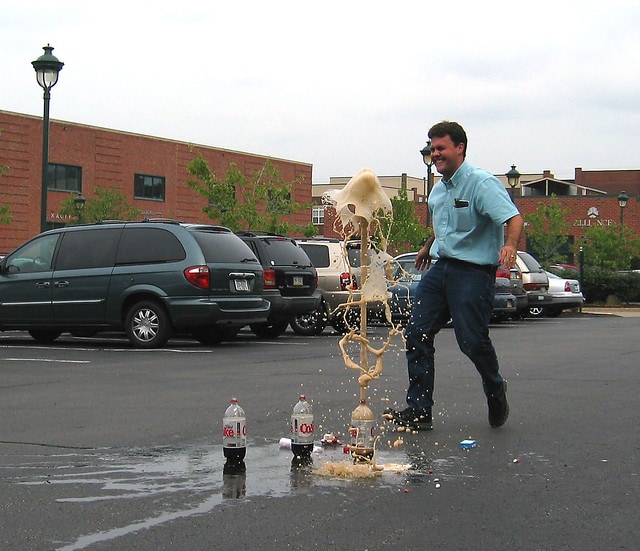 But the process is constant and grows exponentially.

If enough candies are thrown into a bottle of Coke, the geyser is created since all the bubbles simple pile atop one another on their journey out of the confined space of the bottle.

Mentos’ ingredients also help this reaction to some extent.

Mentos candies typically have gum Arabic and gelatin in their formulas.

Furthermore, dropping the Mentos into the soda bottle with force to make it descend quickly will force more carbon dioxide through its small pores and make a faster reaction were more bubbles are created in a short amount of time.

Mentos that drift peacefully through the soda will have a weaker reaction in comparison.

Theoretically speaking, any candy that has enough small pores like Mentos should be able to do this job.

However, there are very few candies with the same kind of porous surface as Mentos, which is why the science experiment is typically done with these candies instead of others.

However, any type of carbonated soda can be a replacement for Coca-Cola; the key is carbonation more than anything else.

You could even theoretically accomplish this with club soda, although the surface tension of the water wouldn’t be weakened since club soda only has a few basic ingredients.

Does Diet Soda Make a Difference With Mentos?

Diet soda stereotypically has a better reaction than regular soda.

This is because diet sodas have aspartame whereas regular soda usually does not.

Regular soda uses sugar or corn syrup to derive most of its sweetening flavor, but diet soda eschews these ingredients in the name of fewer calories and better health.

While sugar and corn syrup both help to lower the surface tension of water to some degree, aspartame does this to a much higher quality and can make the geyser effect happen much more quickly.

Therefore, diet soda is better than regular soda if you want to make the biggest Mentos foam geyser possible. 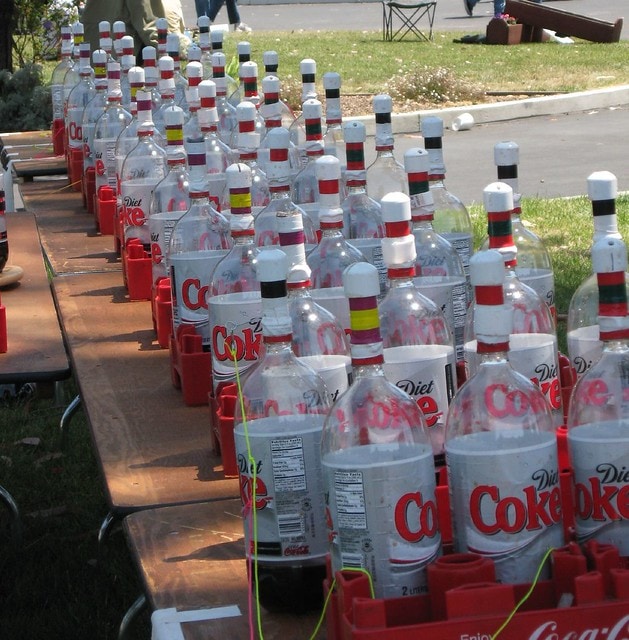 You can also increase the effect by adding extra ingredients to a given soda.

Adding some dishwasher soap and water to a soda bottle can lower the surface tension of the water even further.

The resulting splash from diet soda with this mixture would surely be something to record.

Finally, making your soda bottle warmer instead of colder will make the geyser higher and faster.

All of these tricks help to improve the speed and drama of a Mentos eruption.

Any Mentos in the soda will eventually cause all the carbon dioxide to become gaseous and escape the bottle; the only difference is in how fast and how explosively it occurs.

You can see the results of this yourself by crushing a Mentos and dropping it into a bottle, then comparing the reaction to the whole candy with all its pores intact.

Are There Any Long-Term Health Risks Eating Mentos & Soda?

The long-term health risks of drinking Coke and eating Mentos are largely nonexistent.

Since the escaping gas either comes out in the form of a long burp or in foam that’s expelled through vomiting, the issue basically stops once the soda has evacuated your stomach in one way or another.

It certainly won’t be comfortable and Mentos, but there aren’t any real health risks from doing so.

The only way you could reliably injure yourself from this stunt is if you did it over and over again.

Vomiting in excess is never a good sign since stomach acid wears away the cells of the esophagus and can cause mouth or throat cancer.

Occasional vomiting from sickness or a stomach bug is normal, but forcing yourself to throw up soda and candy at every party is a one-way ticket to extra complications.

Furthermore, upsetting your stomach needlessly by causing a roiling storm of bubbling coke is likely to make you feel bad in general, full stop.

Your stomach is surrounded by many other internal organs that shift normally when you eat a large meal.

But the bubbling you’ll feel on your insides isn’t easy or gentle, so it shouldn’t be performed regularly.

Overall, there’s no need to worry if you’ve done this once or twice before on a dare from a friend.

But it shouldn’t be a regular trick in your party repertoire.

Pick up your   mentos and coke geyser kit here –

make your own at home !