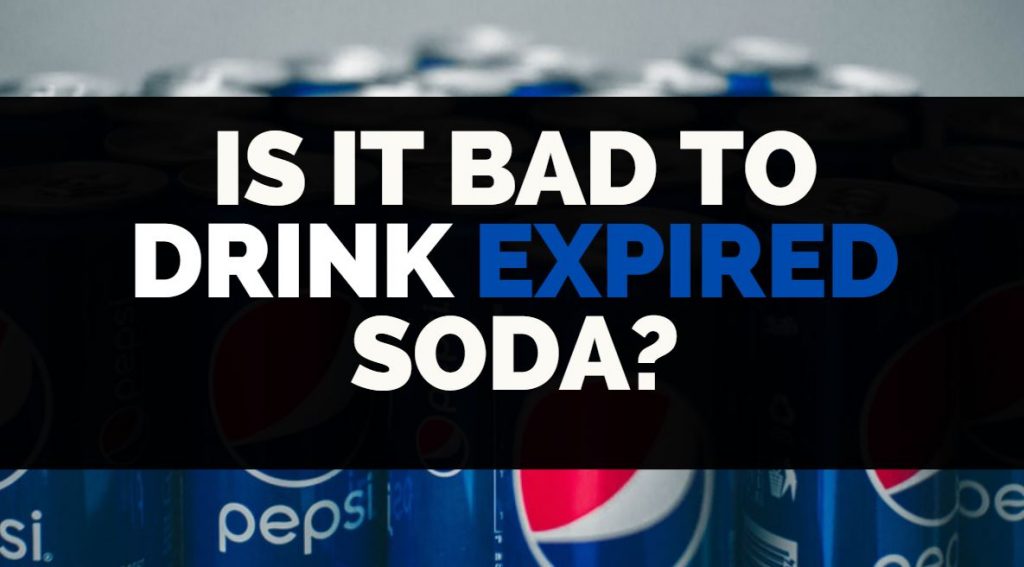 We’ve all had the one can of soda that was found in the depths of the pantry.

The expiration date was up months ago if not years.

You stand there thirsty, contemplating the possible consequences of drinking expired soda.  So the question it hand is.

Is it bad to drink expired soda?

The short answer is: no it’s not bad, it’s perfectly safe to drink expired soda.

All sodas will come with a best by date but that relates to the quality of the soa, they are still safe to drink beyond the date on the label.

You won’t have to worry about becoming sick, but you may have to deal with an awful-tasting and flat soda.

Quality and taste will depend on how far past its shelf life it really is, 3 months, 6 months, or even years past expiration.

even the FDA state that it is safe to consume beyond the sell by date.

You should know that opening the can or bottle of soda will effectively nullify the expiration date as well.  you may have other questions such as

Your soda will degrade in taste and carbonation much quicker after you open it. Although, there are some prevention methods you can use to stave off the reduction in taste once you open the soda.

So, how long do you have after the expiration date before things start to go south for your soda?

While you can drink expired soda without any health consequences, you’re not going to always have a pleasant drink.

After a certain time frame beyond the expiration date, soda will start to lose carbonation and become flat and bad tasting.

In general, you’ll have about six to nine months after the expiration date to still enjoy a refreshing soda.

It should be noted that all soda generally expires around the same time.

Whether you’re drinking Coke, Pepsi, a ginger ale, grape soda, orange soda, or whatever your favorite carbonated drink is, you’ll find that their expiration dates are all relatively the same.

Because the expiration date is nullified after you open a can or bottle of soda, you’ll only have a relatively short amount of time to drink the soda before it goes flat and tastes bad.

Here is a table to show you when unopened bottles or cans of begin to expire past the expiration date:

There may also be a variance if your soda is diet.

While this is a good general rule, there can also be a lot of variation.

There are many confirmed reports of people drinking sodas that were expired by many years and found it tasted fine.

Have a look at this video where these guy drinks 30 year old expired coca cola !


Your mileage will vary depending on how much exposure your can or bottle of soda has had against the elements.

Things such as sun exposure and physical damage to the container may compromise the soda and make it expire faster than expected.

How to Tell if Your Soda Has Expired

If you want to make sure that your soda is still good to drink before taking a sip, you have a few options.

The first thing you’ll want to look for is the quality of the container.

If it looks beaten, dusty, or like it’s had a lot of exposure to the elements, you may be able to tell if the airtight seal has remained effective.

Once the soda is exposed to the air, it’ll begin to deteriorate in quality rapidly.

If the container looks fine and you’re still wanting to make sure that the soda is good to consume, your senses will be your best bet.

The first sign of an expiring soda will be the loss of carbonation.

Check your bottle or can to see if there is still fizz in the drink.

You should be able to hear it as well as see small bubbles on the inside.

If you find that there aren’t any bubbles or fizz, your drink is likely to have gone flat.

If this is the case, the drink is likely still good to drink but you’ll have a flat beverage and it likely won’t taste good.

If considering drinking an expired diet soda, be warned: they’re known to taste worse than their normal counterparts after they begin to expire.

This is because of the artificial sweeteners used in the diet soda to give it flavor.

The artificial sweeteners will begin to break down over time.

It’ll taste worse and worse the farther away from the expiration date you are as well as after it’s exposed to open air for some time.

How to Extend Soda Shelf Life 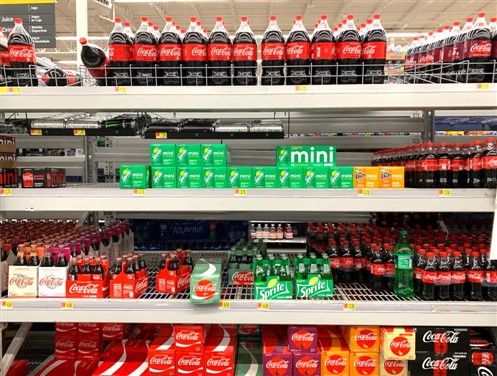 While leaving soda out in the open or your pantry is fine, there are some things you can to further extend the shelf life of soda.

Store your soda in cool, dark areas to give it the best odds of lasting longer.

You’ll want the temperature to be as consistent as possible because if it fluctuates too much, it can affect the carbonation of your soda.

Of course, if you can, refrigeration will always be the best method to keep your soda nice and pleasant well beyond the expiration date.

You should also know that bottled soda will generally keep for longer than canned soda after it’s been opened.

In general, you can expect bottled soda to last between two to three days longer than canned soda.

If you’re one of those people who love to open a soda and put it back down before finishing, consider moving to bottled soda so you won’t waste as much due to de-carbonation.

How Does Soda Expiration Work?

Soda expires mainly because of the lack of carbonation as well as the artificial sweeteners found in diet sodas.

Once the soda has been exposed to the open air, carbonation will begin to rapidly leak out of your container.

The lack of carbonation is what affects the fizziness and flavor of your drink.

If you use a bottle as a container for your soda, you’ll have the luxury of resealing it after you’ve drunk it.

This can help a lot in the preservation of your drink, but once the soda has been exposed to open air you’ll be in a relatively short time.

This is why the expiration date will be more important when you’re drinking diet sodas.

Diet sodas will generally begin to degrade fairly quickly after opening and after their expiration date.

Like normal sodas, they’ll be fine to drink still.

However, they will lose their flavor extremely quickly. This is because as the chemicals begin to break up, they’ll start affecting the overall taste of everything.

What Not To Do With Expired Sodas

While it may seem like the colder the better, it’s not always true.

Yes, sodas will last much longer when refrigerated or kept in a cool area. They may even last for several, if not more, years.

However, too cold of temperature can be a problem as well. If you put your soda in an area where it can freeze, you’ll quickly realize you’ve just ruined your sodas.

This is especially true with canned soda.

This is because as water freezes, it affects the pressure and area within the can.

It can cause your can to become bloated, leak, and damage the structure of the container.

This is also possible with bottled sodas, but much less likely.

The plastic they use to make the bottles is generally much more flexible and won’t have too much issue adjusting as your soda freezes.

Be warned that a large fluctuation in temperature, such as when a bottle or can of soda thaws, can cause a drastic change in the taste and fizziness of your drink. You may try to store your soda for the long haul but end up with a terrible-tasting drink.

Is It Worth It?

In the end, deciding whether to drink an expired soda will be up to you.

Take solace in knowing that there will likely be no negative consequences to your health.

But, your taste buds may be a different story.

Be especially cautious when drinking diet soda as it is more likely to become flat and gross faster than standard soda.

Is it bad to drink expired soda? No, but you probably won’t like it.