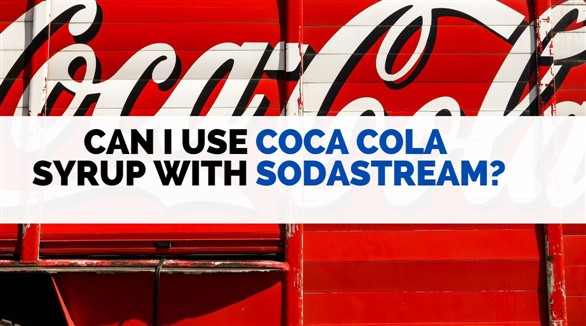 Ever since it became widely available, people all over the world have fallen in love with their SodaStream’s.

A simple but fantastic device that allows people to make carbonated beverages within their own homes.

Originally coming out with their first home carbonation device back in 1955.

Since then, and especially after being purchased by PepsiCo, SodaStream has rapidly grown in usefulness and notoriety.

With owners trying all sorts of flavors and carbonation hacks.

SodaStream offers its customers an abundance of flavors, such as Cherry Cola, Lemon Lime, Ginger Ale, etc.  That said that is not why you’re here,

If you consider yourself a fan of Coca-Cola, and you own a SodaStream, there’s no doubt that you’ve wondered i,

Can I use Coca Cola Syrup with Sodastream?

The good news is, Yes you can use Coca-Cola syrup with a SodaStream soda maker!

In fact, there’s more than just coke to look at when trying to find syrup for your SodaStream.  Alternatives work well too such as Diet Coke and Pepsi syrup.

The bad news is, you don’t get to make nearly as much soda with the Coca-Cola syrup as you can with an equivalent amount of SodaStream’s own Cola-flavored syrup though.

Stick with me and I’ll explain why

So firstly let me cover the quantities of syrup for you to consider.

How Much Coca-Cola Syrup Do I Need?

Famously, and for a good reason, the carbonated beverage produced by using a SodaStream results in a lot less fizziness and bubbles that are normally experienced with a regular can of Coca-Cola, or a popular soda brand.

Considering this aspect, and a few others, the Coca-Cola syrup you can purchase is much less concentrated compared to the syrup sold by SodaStream themselves.

If you were to use 1 gallon of SodaStream Cola syrup, you would be able to make 24 gallons of soda with that one Liter.

This means that SodaStream’s syrup has a 1:24 dilution ratio.

On the other hand, if you were to use 1 gallon of syrup from Coca-Cola, you would only be able to make about 6 gallons of soda from it, giving the syrup a 1:6 dilution ratio.

Put in other words, this could mean that you really would not be saving any money by using Coca-Cola syrup to make your own soda, instead of just buying the soda cans from retail/grocery stores.

A lot of people use SodaStreams to save on money and to refrain from buying an excess of bottles.

It should be noted from the get-go that you’ll only be able to make ¼ as much soda with Coca-Cola syrup as you can with Cola syrup from SodaStream.

Contrarily, it only takes .04 gallons of SodaStream Cola syrup to make 1 gallon of soda.

How Exactly Does The SodaStream Work?

A SodaStream device can seem like a complicated one when you first start using it.

How can one just simply make a beverage carbonated without much external help?

Well, it turns out that the answer is pretty simple.

With a CO2 container, a user simply attaches it to their device accordingly, and then with the push of a button can force carbon dioxide into the water, giving it the bubbly and carbonated taste many people grew to love.

So simply put, the water becomes carbonated by using a CO2 container to force the CO2 into the water.

After doing so, the water is carbonated and bubbly.

Simple enough, right? The best part is, setting it up and making soda with it is very easy and user-friendly.

To make a soda with the SodaStream, all you’ll have to do is;

Creating soda with the SodaStream is a rather easy process, which has made tons of users confident of the fact that if they can get their hands on some Coca-Cola syrup, then they can surely make it taste just as good as the original.

I recommend checking out my how-to guides in the SodaStream section for specifics on the various models.

Is SodaStream Better Than Coca-Cola?

There are many reasons why consumers would prefer SodaStream over Coca-Cola, or vice versa.

SodaStream grants people the ability to make soda within their homes at a cheaper cost; they don’t have to use nearly as many bottles compared to those who consistently buy bottles from stores; many people generally just prefer the taste of it over traditional soda.

Nevertheless, if someone were to ask what was better between Coca-Cola or SodaStream soda, they would more than likely be referring to the taste of it, and which was better.

Many users online have stated that they have made soda with SodaStream Cola syrup that tastes almost identical to a real Coca-Cola soda.

In all honesty, the biggest difference you will find between the two is the levels of fizziness experienced.

Making soda with a SodaStream device and drinking it is considered to be a healthier alternative than drinking traditional sodas, such as Coca-Cola.

A big part of this is the level of carbonation that is used to make soda from SodaStreams, which is much less in comparison to the level of fizziness found in a Coca-Cola can.

Coca-Cola has a higher carbonation content than soda made from SodaStreams.

For this reason, many people will either prefer Coca-Cola, or their soda made from a SodaStream. Some people would much rather have a higher level of fizziness in their soda, whereas others much rather prefer there to not contain as much carbonation.

So, unsurprisingly, it would really require you to taste both in order to see which one tastes better to you. If you prefer a higher level of carbonation and fizziness, it’s likely that you’ll lean more towards Coca-Cola.

Where Can I Buy Coca Cola Syrup?

The biggest challenge of making soda with Coca-Cola syrup, can be finding the syrup in the first place!
Unfortunately, Coca-Cola syrup is not widely available, and is not sold in many stores.

But, sure enough, there are places to find it, they just may not always pop up on the first search.

When you purchase Coca-Cola syrup, it comes in a box consisting of 5 gallons of the syrup.

You are able to find these boxes of Coca-Cola syrup at wholesale retail/grocery stores, such as Sam’s Club,  Amazon, eBay, CudaKitchen, etc.

Check out my kit bag here

Most of the time, you’ll have to find these boxes of syrup online through the listed store’s websites, and will have to ship them to your house as opposed to going to the store and picking it up, due to lack of immediate availability.

Generally, the box of Coca-Cola syrup can be purchased for around $50 – $110, depending on where you purchase it from, or who’s selling it.

As mentioned, with the Coca-Cola syrup, you won’t be able to make nearly as much soda compared to if you used an equivalent amount of SodaStream cola syrup.

Earlier on, it was mentioned that there are several alternatives of soda syrup to use in your SodaStream then from the ones made by SodaStream themselves, or Coca-Cola.

If you aren’t a fan of SodaStream’s syrup, or simply just want to try out something else, there’s a few distributors you can choose between to try and find the syrup that’s right for you;

Each of these soda syrup distributors makes their syrup their own way, but many of the flavors can have the same general taste.

If you’re ever interested in going outside of the box with your soda syrup choices, try out some of these sites!

As you can tell by now, you are able to make soda with Coca-Cola syrup using your SodaStream device at home.

The only bad thing is that you don’t get to make nearly as much compared to using syrup from SodaStream or most other distributors.

So, take some time to shop around, and see which flavor is best for you.

After you’ve decided, you’ll be able make as many as you like within the comfort of your own home.

Dont forget to check out my own Syrup Kit bag here