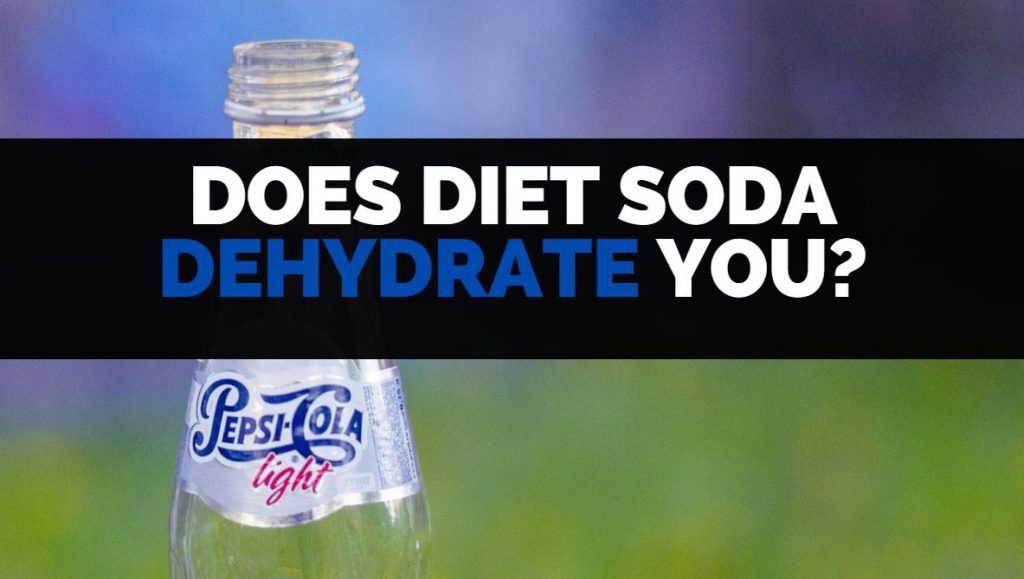 Staying hydrated is an important part of being healthy overall.

Many people think that you should only drink water to stay hydrated and that drinking things like coffee, tea, or even diet soda won’t help, and can even dehydrate you in the long run.

For others, they aren’t sure, so we’re here to answer that pesky question that bothers so many people.

Does Diet Soda Dehydrate You ?

The short answer to this is that no, in normal amounts of consumption, diet soda will not dehydrate you.

In fact, nearly anything that you can drink will hydrate you to some extent except for alcohol.

And if you’re curious about some tips about how to stay hydrated and quench your thirst, we’ve got you covered on that angle as well.

People think that’s soda is dehydrating because it contains caffeine and sugar.

They think that caffeine, which is a diuretic, makes you have to pee more, which means that you will lose more water than you’re actually taking in.

But here’s the truth, according to Dr. Douglas Casa, a professor at the University of Connecticut, you’re actually going to retain a lot of fluid from drinking soda. By all means, water is your best choice when you need to stay hydrated.

But if you are thirsty, and you choose to drink a diet soda instead of water, you shouldn’t worry that it’s going to worsen the effects of dehydration.

The same goes true for other caffeinated drinks that people think will dehydrate you.

Both Coffee and Tea well contribute to your daily fluid requirement.

The general rule of thumb that you can apply to caffeinated drinks is a two-thirds rule. If you drink 16 oz. of soda, then that is roughly equivalent to drinking 12 oz. of water.

So as you can see, you are still hydrating yourself, just not as effective as if you were to drink 16 oz. of water.

So, Why Did My Mom/Sister/Best Friend Say Diet Soda Dehydrates?

So why do people think that diet soda will dehydrate you?

That’s because at first, scientists thought that things like coffee and tea were diuretics, in that they caused you to go to the bathroom more than normal.

So initial studies, and some anecdotal evidence lead people to believe that when you drink things with caffeine in them, you pee more. And this is true.

See, caffeine can affect the production of a specific antidiuretic hormone.

This antidiuretic hormone is produced by the pituitary gland in your brain.

Normally this hormone travels to the kidneys and it causes you to retain water to keep you hydrated.

It makes you pee less when you haven’t had enough water.

Caffeine, however, causes this hormone to not be released. Then your kidney is no longer retaining water and you end up peeing a little bit more.

However, the amount of caffeine that you drink is extremely important in calculating its diuretic effect.

When you consider that a single can of diet soda contains roughly 29 mg of caffeine, it’s not going to inhibit the production of the antidiuretic hormone.

In fact, according to a study done in 2003 titled “Caffeine Ingestion and Fluid Balance: A Review” published in the Journal of Human Nutrition and Dietetics, they found out that 250mg is roughly the breakpoint for the diuretic effect.

Lower than that much caffeine and there is no significant diuretic effect.

If you ingest more than that then you are going to the bathroom more than you usually do.

So considering that your diet soda has 29 mg of caffeine per 12 oz. can, to hit 250mg, you would need to drink about 9 to 10 cans of soda at once to cause a significant impact on your hydration.

Compare that to the 95 mg in a single 8 oz. cup of coffee, and you can see where the misinformation started.

Drink 2 and one-half cups of coffee and you’re hitting that diuretic break point. Even black tea has 47 mg per cup, so five cups of tea and you’re there.

So in the long run, having the occasional bottle of diet soda isn’t going to make you dehydrated.

Should you choose water over soda?

Of course you should, but having a treat every now and again is much better for you than not drinking any liquids whatsoever.

So, Does Diet Soda Quench Thirst?

There is a large difference between quenching your thirst and being hydrated.

Having your thirst quenched is a purely physical reaction to the immediate sensation of liquid entering your body. Think about what temperature you drink diet soda at.

In most cases, you drink it either cold from the fridge or over ice.

There have been scientific studies that drinking cold and carbonated liquids give more feedback to your body that you are responding to the dehydration signals.

Therefore, when you drink ice cold diet soda, your body is better at recognizing your response to those signals.

Therefore it feels like you are quenching your thirst.

According to some people, a lower temperature and the presence of any flavor increases the sensation of thirst quenching when compared to just plain water.

This is why adding a slice of lemon to a glass of water can make it much more satisfying.

If you are looking for tips on how to stay hydrated without reaching for a bottle of diet soda, here are five ways that you can do so.

Keep in mind, that having an occasional soda is not a bad thing, and it will not cause you to dehydrate as long as your consumption is limited.

Tip One: Keep A Cold Jug of Water in Your Fridge

We’ve shown you how a lower temperature can increase your body’s satisfaction with the feeling of not being thirsty.

By keeping a jug of water in your fridge, you can make sure that you have cold water whenever you need it.

If you plan on making a trip, or you’re going to be in your car, prep a water bottle the night before by filling it half-way and laying it on its side.

In the morning, the water will have frozen to one side of the bottle. Fill the other side with tap or filtered water, and it will be ice cold for quite some time.

A good bunch of grapes or a handful of grape tomatoes will go a long way toward getting some much needed hydration into your body.

And you’ll also be getting fiber, vitamins, and minerals along with it. Try to go for fruits that aren’t starchy, like apples or stone fruit.

You can also quench your thirst and your craving to nibble on something by munching on lettuce. It might sound strange, but one cup of lettuce can provide up to a quarter cup of water and a gram of fiber.

We understand that water can be boring at times.

So go crazy and mix it up. Grab some mint and a cucumber and throw a few slices and a couple of sprigs into your water jug.

Add some strawberries and a few slices of orange in for a fruity refreshing drink. Heck, even just two lemons quartered and added to a gallon of water can make all the difference when it comes to making getting your 8 glasses of water every day more pleasant.

Don’t be shy when it comes to trying out flavor combinations either.

Chopped raisins and blackberries add a sweet summer taste that seems strange, but is subtle and refreshing.

It’s hard to know if you should be drinking water now, or later.

Thankfully, there’s an app for that.

You can find numerous health and nutrition apps that are more than happy to help you track your water intake. And by pressing the little buttons and getting a notification, you’re also tapping into the positive feedback portion of your brain that releases a little dopamine, your natural feel good hormone.

Coconut water is the new health craze, and there’s a reason why.

Not only is it refreshing with a tropical zing, it’s also packed with electrolytes that help rehydrate and make you feel better.

It’s like nature’s Gatorade. Just go sparingly with it, because it does still have a calorie count, and make sure you drink coconut water that doesn’t have added sugars.

Diet soda gets a bad rap sometimes, but it’s not that bad of a drink when you’re thirsty and want a treat.
A single bottle or can doesn’t have enough caffeine to act as a diuretic, and while you’re not benefiting as much as you would from a full glass of water, any liquid is good in a pinch.

Just remember that drinking something is better than drinking nothing at all. But above all water is your best friend – just don’t be hard on yourself for drinking diet soda in moderation.