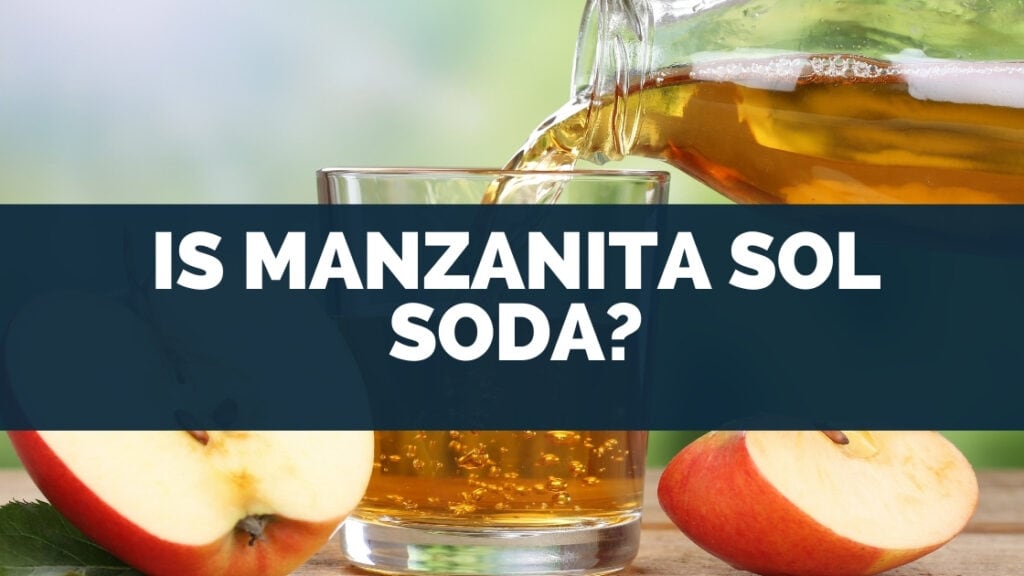 I came across Manzanita Sol, and I found it to be a rather interesting drink.

So, I was wondering whether it’s classed as a soda. I did a little research and here’s what I found.

So, is Manzanita Sol soda?

Manzanita Sol or Manzanita Sol Apple Soda is a fruit-flavored soda made by PepsiCo Beverages and is listed on Pepsi’s official website.

Manzanita is a derivative of the Spanish word Manzana which means apple, and sol which translates to ‘sun’.

Whether you’re interested in what flavors Manzanita Sol has, what it tastes like, whether it contains caffeine, or where you can buy it, this article will explain everything you need to know about Manzanita Sol soda. 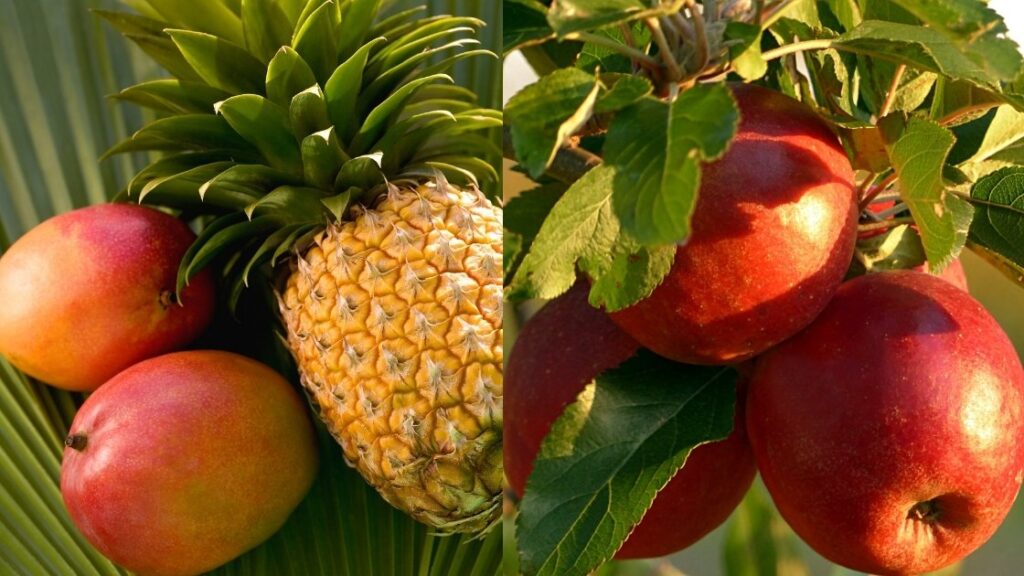 And according to Wikipedia, it’s Pepsi’s second most popular flavor in Mexico to make Manzanita Sol Apple Soda.

Manzanita Sol Apple Soda is made with real fruit juice and is available in cans, bottles, and in selected soda fountains.

PepsiCo is the second largest soda company that made Manzanita Sol Apple Sodain in the USA, shadowed by Coca-Cola, which sells nearly twice as much, as shown by Statista.

Coca-Cola also brought out Manzana Mia which was an apple soda as shown in this article.

However, Coca-Cola no longer lists either of these flavors on its website.

And it appears that they’ve discontinued them. At least for now.

Soda companies such as PepsiCo and Coca-Cola often bring out sodas for a limited time for example Mountain Dew Baja Blast, which I wrote about [here, link: What is Baja Blast?]. 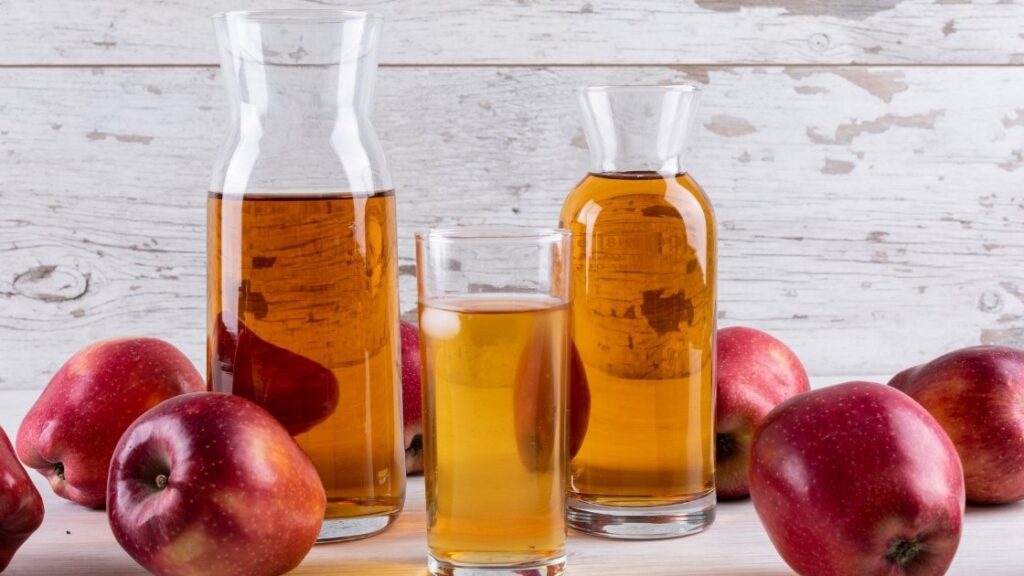 Manzanita Sol apple Sodatastes are like a blend between the tartness and sweetness of apples, but slightly sweeter.

Manzanita Sol pineapple mango tastes like a mix of pineapple and mango.

Both contain real fruit juice which comes through in the flavor profile.

Here’s a quick video of a taste test of Manzanita Sol done by the Youtube channel ‘Soda Tasting’:

Does Manzanita soda have caffeine? 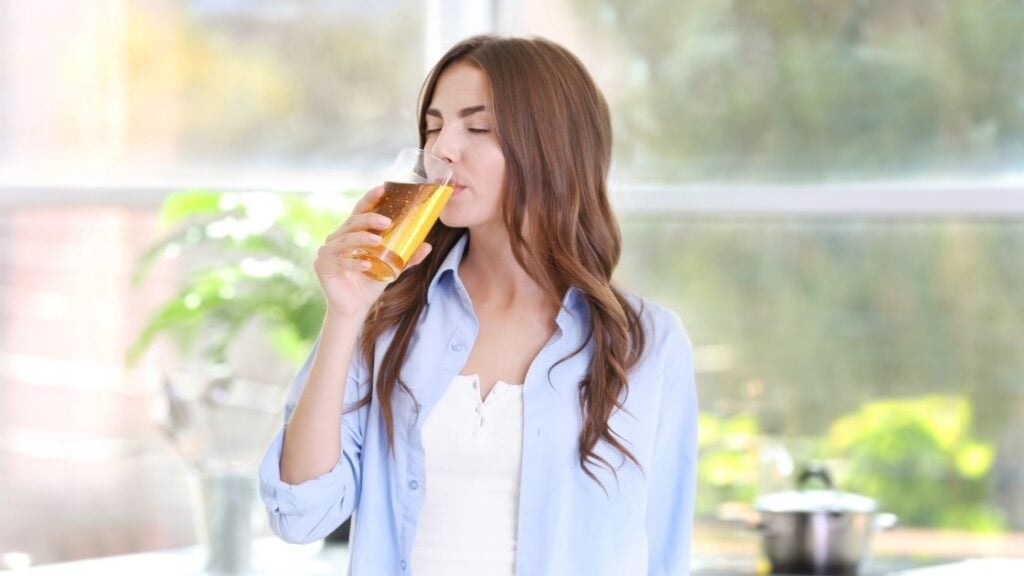 As shown on the nutritional information on the official PepsiCo website Manzanita Sol apple soda does not contain any caffeine.

PepsiCo does not list the ingredients in Manzanita Sol pineapple and mango, so it’s unknown whether it contains caffeine or not.

In my opinion, it’s unlikely that it contains caffeine.

Based on my research caffeine is typically only added to colas.

And Coca-Cola has said that this is done to improve the taste.

But, without a nutritional label, it can’t be said for sure.

In trying to find out, I saw that there aren’t any bottles of Manzanita Sol Apple Soda sold on other websites like Amazon that would show the nutritional label.

And it appears it is a very new flavor, and not much information (the amount of Sodium benzoate and calories per bottle) is available about it yet.

Where can I buy Manzanita Sol? 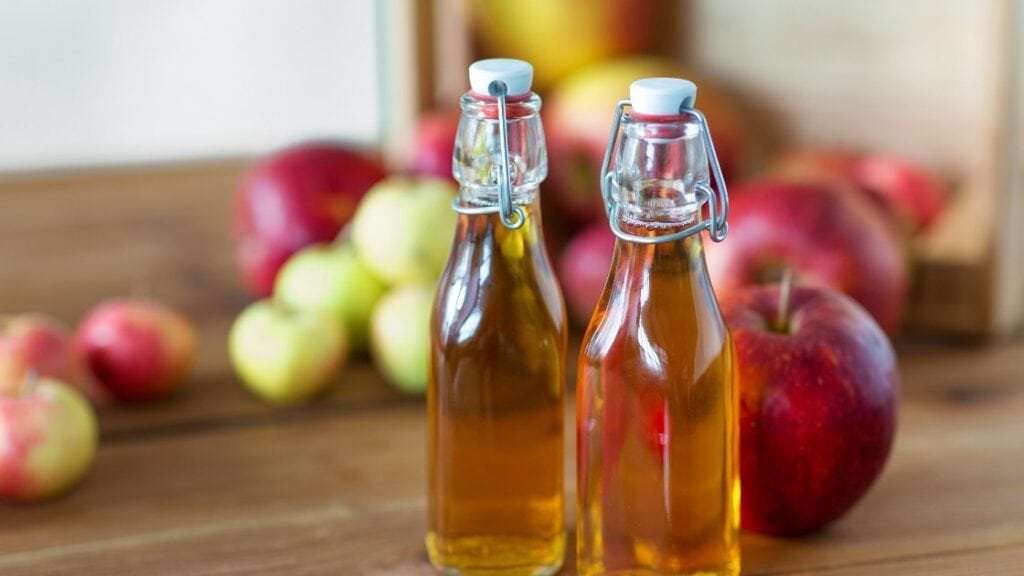 You can buy Manzanita Sol apple soda on Amazon, Walmart, and other big-name supermarkets.

However, it has very limited availability in other countries.

On the Wikipedia page for Manzanita Sol or Manzanita Sol Apple Soda, they state that it’s very popular in Mexico, however, it’s not listed on the Mexican PepsiCo website.

They do, however, have a Mexican Manzanita Sol Facebook page, which you can see here and on the grocery retailers.

It has a bunch of videos that look like TV ads and their most recent posts get around 800 likes/reactions.

But on their Facebook page, there isn’t any info about where you can buy it.

If you live in Mexico or traveled there recently, please let me know in the comments if you know anywhere where you can buy Manzanita Sol Apple Soda in Mexico.

And I’ll update this article. 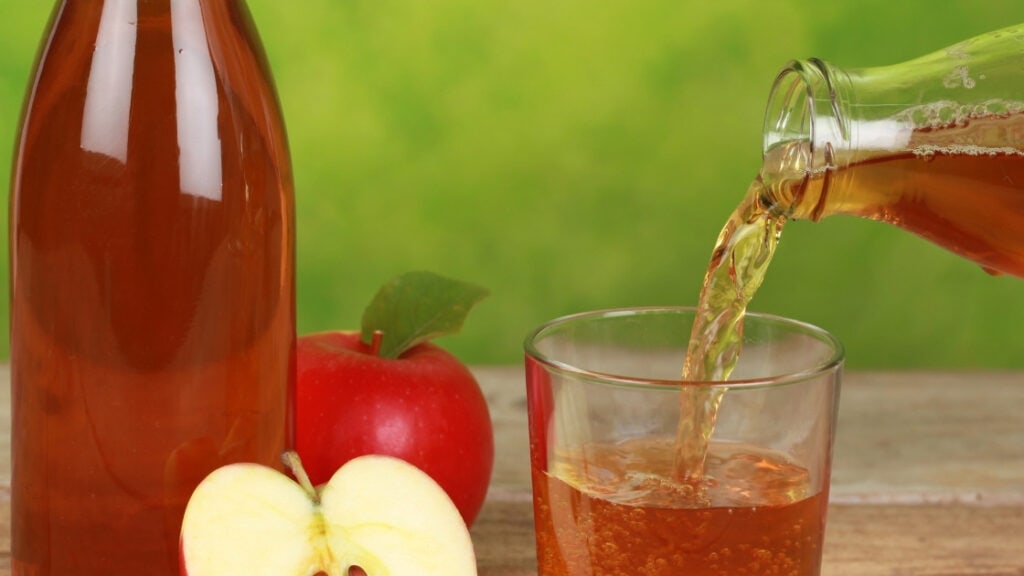 Manzanita Sol Apple Soda does not contain any alcohol as it isn’t listed as one of the ingredients on the official PepsiCo website.

Apple cider is the closest thing to an apple soda with alcohol, however, it typically has 10% alcohol which is about double that found in standard beer. 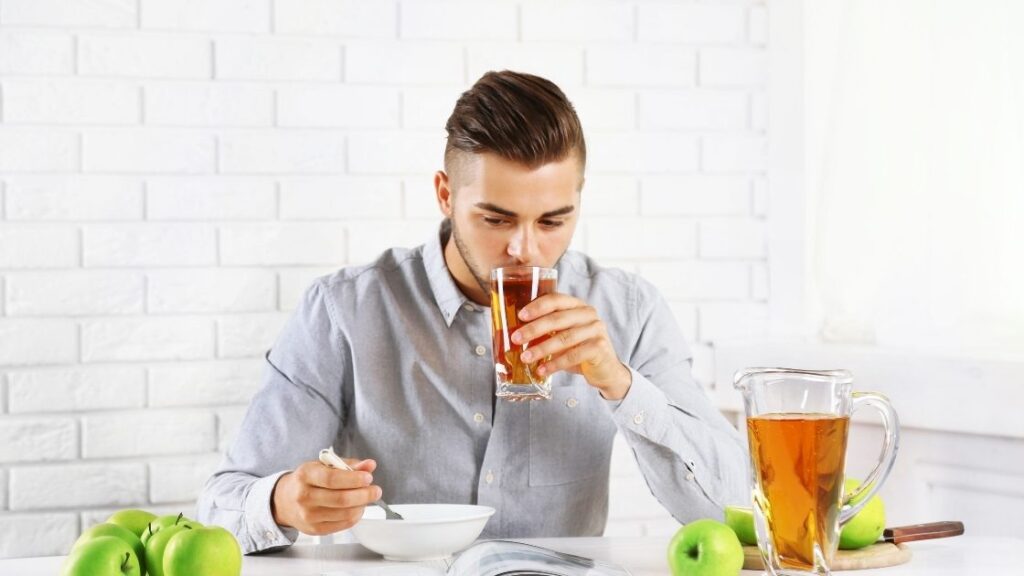 PepsiCo says on their website that Manzanita Sol pineapple and mango are only available to selected customers – retail stores who buy Manzanita Sol Apple sodas wholesale from PepsiCo.

And it’s only available for a limited time.

This leads me to believe that it’s very new, and they haven’t added all the information for it yet.

Here’s a comparison of the sugar content and calories of Manzanita Sol apple and other well-known sodas.

The data for the table is provided by the US Department of Agriculture’s Research Service (USDA) which you can see by clicking here for Pepsi, and here for Dr. Pepper.

And the link to the nutritional information for Coca-Cola is available here.

In previous research I did into the sugar content of Coca-Cola, the data from the USDA showed that Coke has almost 7 times the calories and sugar as other sodas.

But, the data on sugar, Fructose Corn Syrup, and calorie content shown on the official Coca-Cola website is slightly different.

It’s still almost double, however, and if you’re looking to limit your calories and/or reduce the sugar in your diet then other sodas are a better option.

Also, as you may be aware, some of the flavors come in zero versions which have zero calories and zero sugar.

What’s the difference between Manzanita Sol and Fanta green apple? 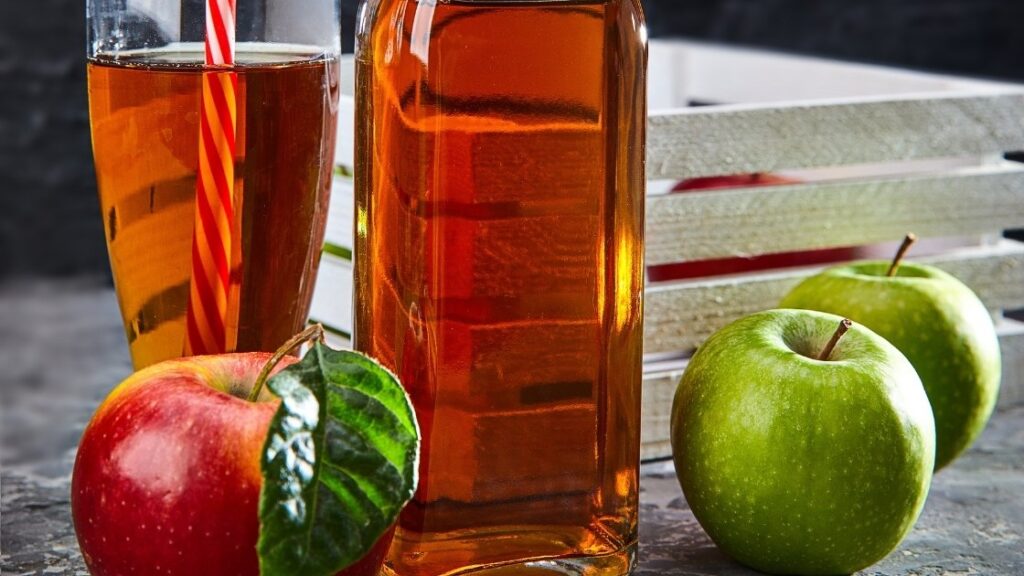 Also, Manzanita Sol is made with real fruit juice, whereas, Fanta Green Apple doesn’t list this species as one of its ingredients.

Here’s a table that shows a side-by-side comparison of the ingredients in Manzanita Sol apple:

You can see that a lot of the ingredients are very similar, but Manzanita Sol apple has apple juice concentrate.

But, Fanta Green Apple has 12.75g of sugar and 47 calories per 3.4 oz (100mL), which is very similar to the amount of sugar and calories in the Manzanita Sol apple.

The nutritional information for Fanta Green Apple can be found here.

I recently wrote about Fanta Green Apple in more depth in this article.

You can read it by clicking here: What Is Green Fanta?

In case you haven’t heard of it, Coca-Cola also makes a soda called Appletiser, which is 100% apple juice.

You can check it out here. It’s my favorite apple soda.

Here’s a summary of the key points I covered in this article about Manzanita Sol.

The apple flavor in Manzanita Sol Apple Soda tastes like carbonated apple juice, but not as apple-tasting as drinks like Appletiser which is made of 100% apple juice.

Manzanita Sol does not contain caffeine and has about the same amount of sugar and caffeine as other popular sodas like Pepsi and Mountain Dew.