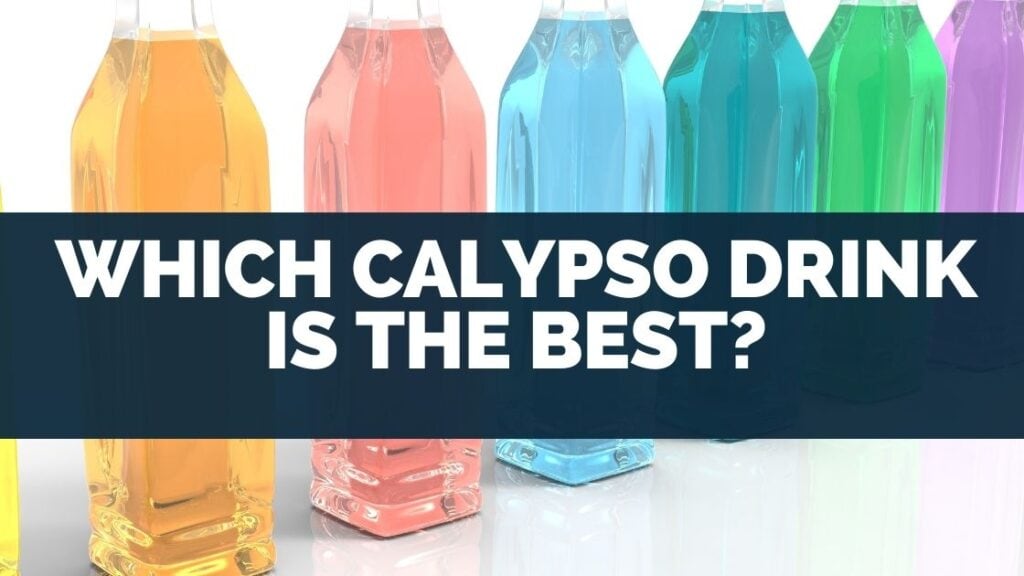 I’ve heard many good things about Calypso lemonades, but I wondered what flavor is the best in fantastic taste for taste buds.

I did some taste testing and complimentary online research, concluding here.

Calypso has said that Black Cherry is one of their best-selling flavors.

People have also commented that both these flavors taste delicious.

Other flavors that are especially good are:

In this article, I explain what Calypso flavors there are, who owns Calypso, and what’s in it.

How Many Calypso Flavours Are There? 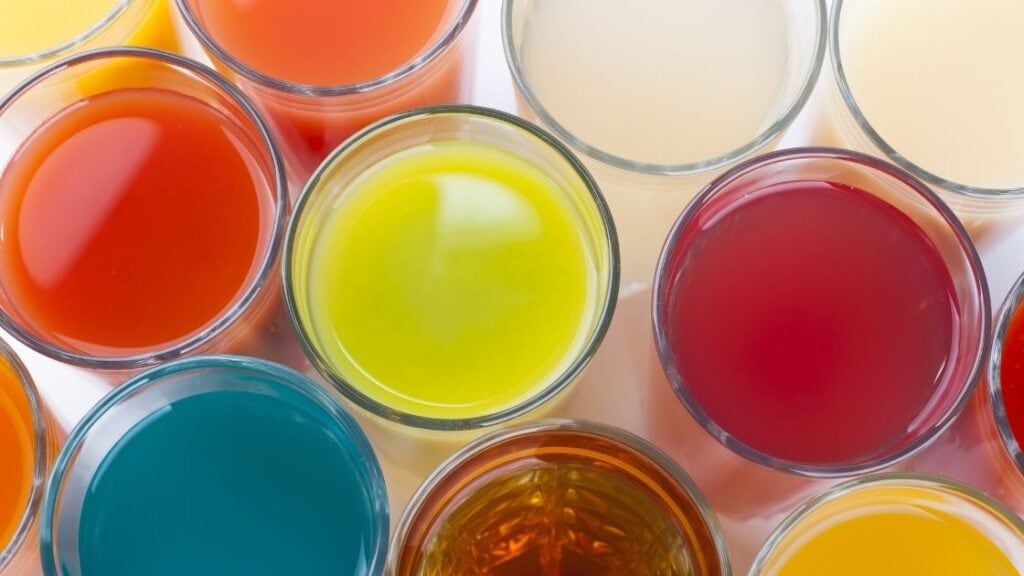 Calypso has come a long way since it started with one delicious lemonade flavor in 1985.

Now, they have introduced about one dozen lemonade flavors.

However, how many flavors total do they have?

In total, there are 20 Calypso flavors.

But of those 20 flavors, 4 are duplicate flavors but are ‘light’ versions of lemonade combinations.

Which contains zero natural sugar and hardly any calories.

Also, 4 of their flavors are limeades rather than lemonades.

The remaining 12 are all lemonade category flavors.

Here’s a list of all product details of their flavors separated into their different types:

Variety of Flavors of Calypso Lemonades

The main thing about Calypso sodas is that they are pretty sweet.

But, some people think it tastes too sweet and dont like it.

Especially if you try the best flavors like Black Cherry and Kiwi.

These two are Calypso’s Top-Selling Flavors and are considered FAVORITE flavors.

However, it depends on how much of a sweet tooth you have and whether you’re in the mood for such a strong and sweet flavor.

For example, if you just did a hard workout, you may prefer to drink something a bit lighter tasting. 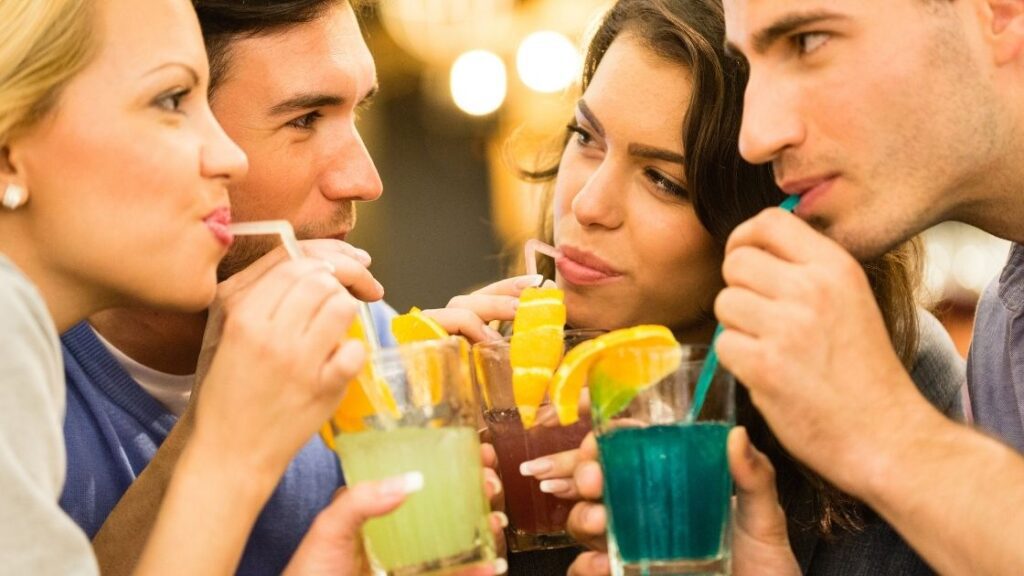 It is always interesting to find out who owns what sodas and what company makes them.

So, I looked into who owns Calypso.

Calypso is owned by King Juice Company, based in Milwaukee, Wisconsin.

The owner was experimenting with making lemonade from real fruit juice and real lemon bits.

The drink he created was trendy, and later it was named Calypso and became its brand.

Calypso has an island influence from the Caribbean Islands located SouthEast of the United States.

Calypso is the name of a dance famous in Trinidad and Tobago and has a heavy African influence.

On a side note, multiple large soda companies produce many well-known soda brands.

For example, Schweppes is made and distributed by both Coca-Cola and Pepsi Co.

However, it doesn’t appear that this is the case with Calypso, which remains privately owned by King’s Juice Company.

What Is in Calypso Drink? 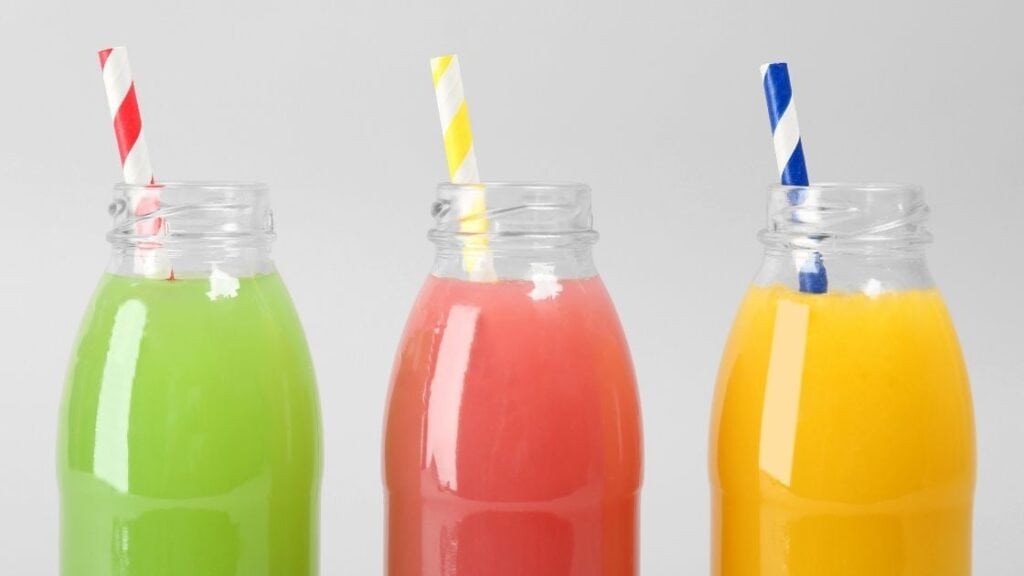 Some sodas are high in sugar and caffeine, so you shouldn’t drink too much. Beverages with sugar are unhealthy for the health condition.

But how does Calypso compare, and what’s in it exactly?

The original idea behind the Calypso brand was to make a lemonade containing real fruit juice and sugar.

I saw the last two ingredients that stuck out to me as being a bit odd, so I looked into them further.

FD&C Blue #1 is a widely used food coloring, and according to Drugs.org, it is deemed safe to be used in food and drink.

EDTA is also a common ingredient used in food and drinks to preserve food’s color and flavor. 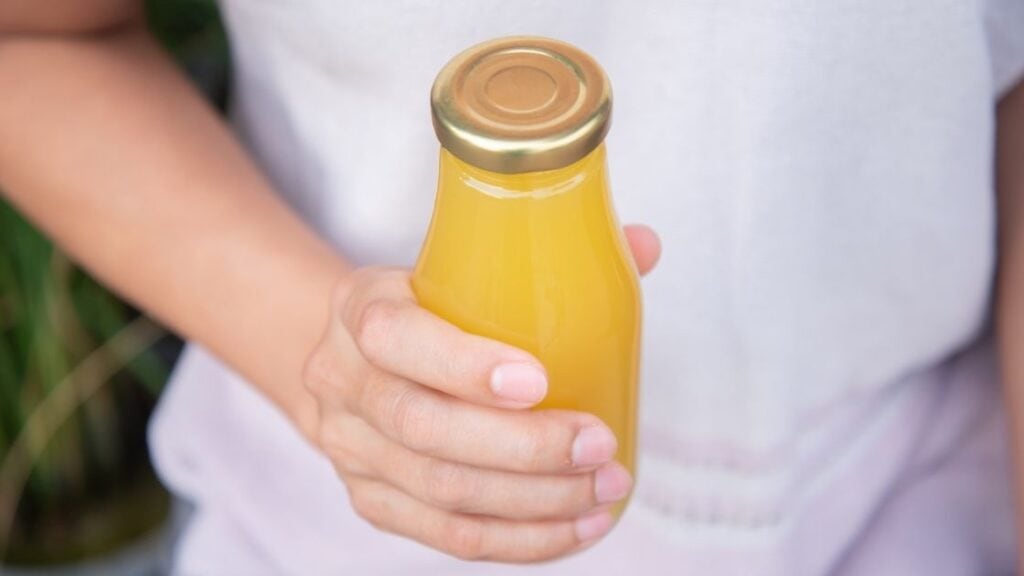 Calypso is a flavorful soda with a strong and sweet taste.

But do any of their drinks contain alcohol?

As a whole, none of the Calypso drinks contain alcohol.

There are currently no plans for Calypso to make any alcoholic drinks in the future.

Interestingly, king juice co is the only brand that makes Calypso.

As you may know, soda companies and brewers differentiate between drinks that are alcoholic by referring to them as either ‘hard’ or ‘soft.’

A soft soda or soft drink doesn’t contain alcohol, but a hard soda such as a complex root beer contains alcohol.

Is Calypso Nice to Drink? 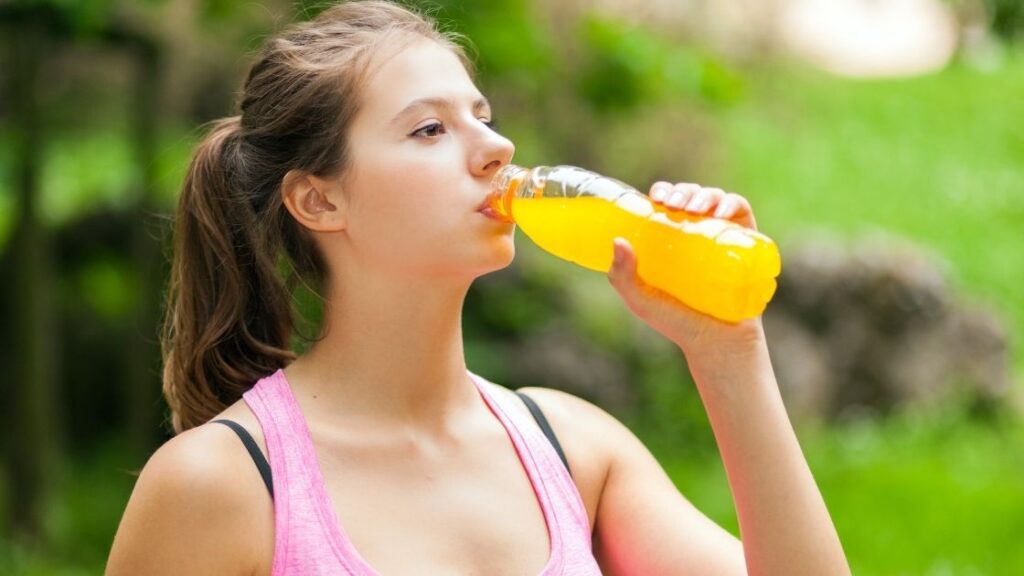 All this talk about Calypso sodas. However, is it nice to drink? And is it as good as other lemonades?

Calypso original is similar to other lemonades like Sprite or 7Up.

But, because they use real lemon juice and bits of lemon, it has a more natural and pleasing taste.

I recommend getting the original Black Cherry Lemonade or Kiwi for someone who hasn’t tried Calypso before.

The main distinguishing factor of Calypso is that it tastes lovely and has a strong flavor.

Which can be a bit overpowering for some people’s taste.

How Much Is Sugar in A Calypso Drink? 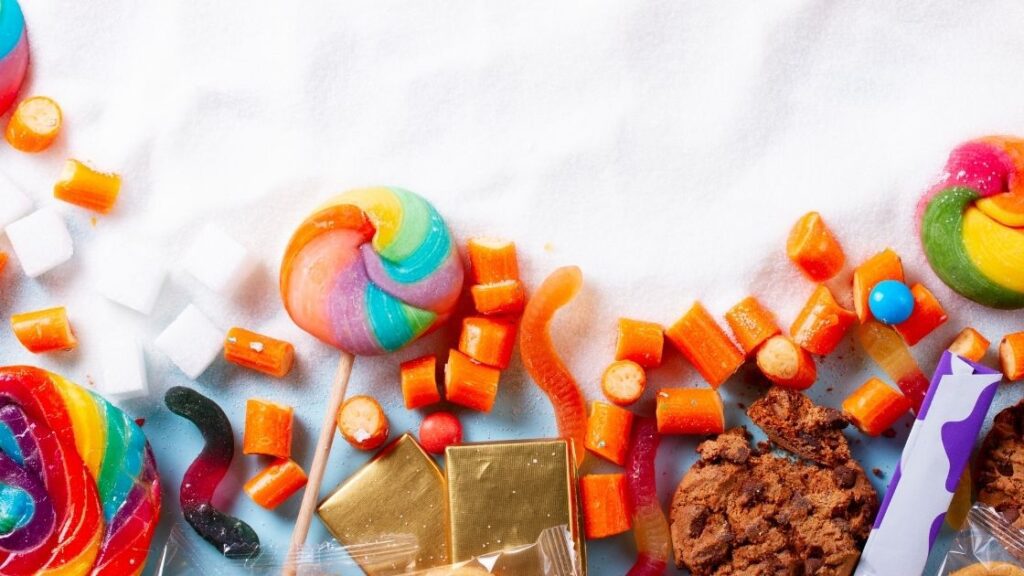 Consuming too much sugar can be bad for your mood and your health.

So, then how much sugar is in Calypso soda?

This is the same sugar found in virtually all other sweetened sodas on the market.

For example, Pepsi and Dr. Pepper.

The odd soda out is Coca-Cola which has, on average, seven times as much sugar as other sodas.

But this is not necessarily bad for you as long as you don’t drink too much of it.

Here’s a table that compares Calypso’s sugar amount to other well-known sodas.

Calypso also makes a light version of some of its soda flavors.

They have the following light versions of their lemonade soda flavors:

However, they don’t make any light limeades.

The general recommendation from medical professionals is to consume a maximum of 37g of natural sugar per day for a male adult and 25 grams for a female adult.

As you can see, to reach the daily sugar limit, you would need to drink about 1 cup or 1.5 cups of Calypso soda in a day.

Another concern with sodas is how much caffeine they contain.

Looking through the ingredients list of the Calypso flavors, I found that none contain caffeine.

Where Are Calypso Drinks From? 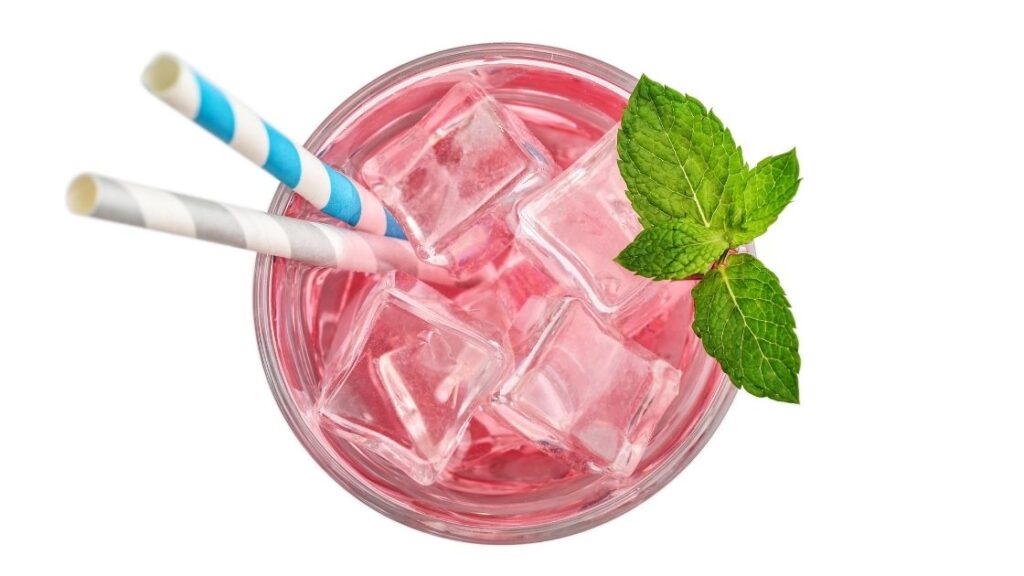 Calypso is an unusual name, and it’s not immediately obvious what language it is.

So, you may be wondering where Calypso soda is from.

The name Calypso is the name of a character in Greek Mythology.

However, it’s also the name of a dance style in the Caribbean Islands.

Calypso states on its website that they have an ‘island influence’ referring to the Caribbean Islands.

The Caribbean Islands are known for their warm weather, and their climate is well suited to grow a wide range of delicious fruit.

The Caribbean is also a popular travel destination for folks that live in the USA because it’s very close by and is well known for its tropical white sandy beaches.

Therefore, anyone from the USA who has traveled there may recognize it as Caribbean-influenced.

Another famous Caribbean soda is Ting from Jamaica.

I recently wrote about what it is and how it tastes. You can read it [here: link, what is the Jamaican Drink Ting].

Where Can You Buy Calypso? 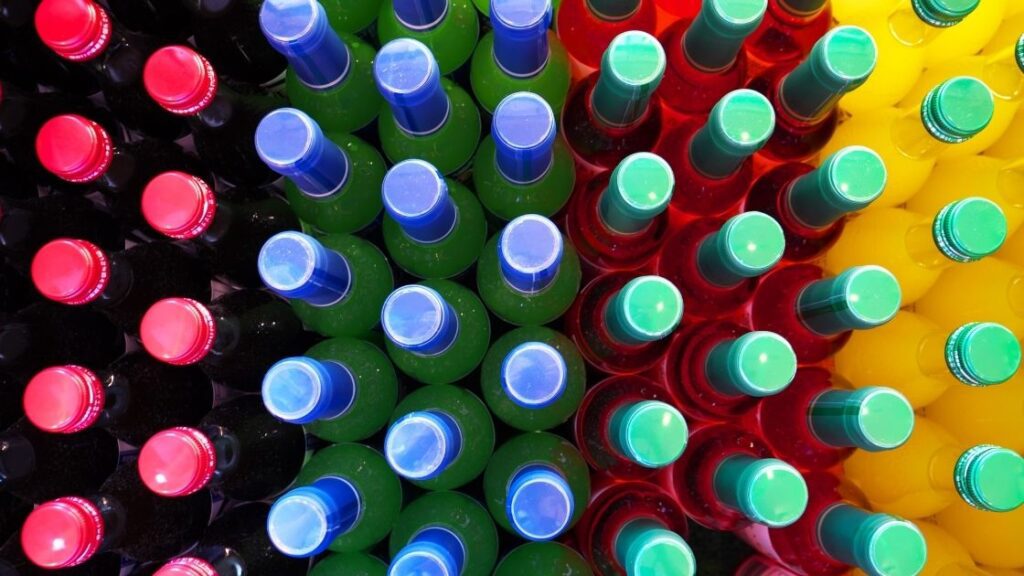 Since some flavors of Calypso are known to be very good, I was interested in where I could buy it.

I looked around the internet, and here’s what I found.

Calypso can be purchased from most supermarket chains in the USA.

As well as on Amazon and other specialty soda websites.

You can also typically buy it online on the website of supermarket chains and have it delivered or ready for pick up.

Here’s a list of the stores that sell Calypso soda.

But, the stores that sell it are updated from time to time.

The Calypso website has a great tool that will show you if stores close to your location sell it.

You can also put it in other locations, for example, if you’re out of town. You can access it here.

If you live outside of the USA, some specialty soda websites will sell it.

However, it usually costs a little more than a standard soda because of the cost of importing it.