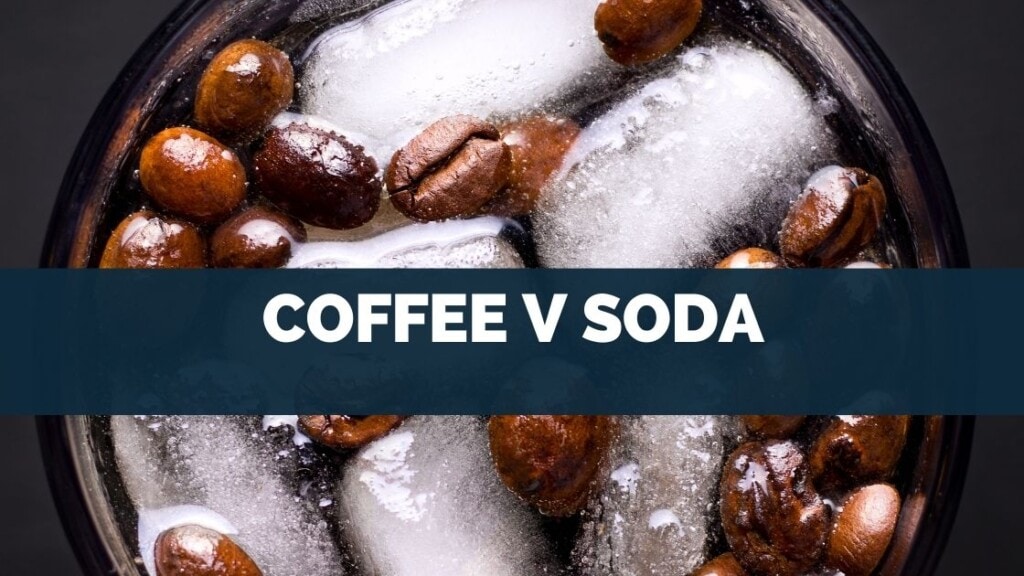 Some sodas also contain caffeine much like another very popular drink coffee.

In this article, I will compare coffee and soda to determine which is better for you, here’s a quick summary.

On average, coffee contains 4 times the amount of caffeine that soda has.

The amount of caffeine in coffee isn’t harmful even if you drink many cups per day.

The main concern is the sugar content in sodas, which is in much higher amounts than what a person would typically add to a coffee.

Therefore, the caffeine in coffee isn’t the main factor instead the thing to take note of is the sugar content.

But, provided you don’t drink over a certain amount of soda or drink a lot of sugary coffee, the levels of nutrients you’ll be consuming won’t be at levels that can be harmful.

So, below I will explain what these are, how much you can consume in each, and how exactly the nutrients in soda and coffee differ.

Does Soda Have More Caffeine Than Coffee? 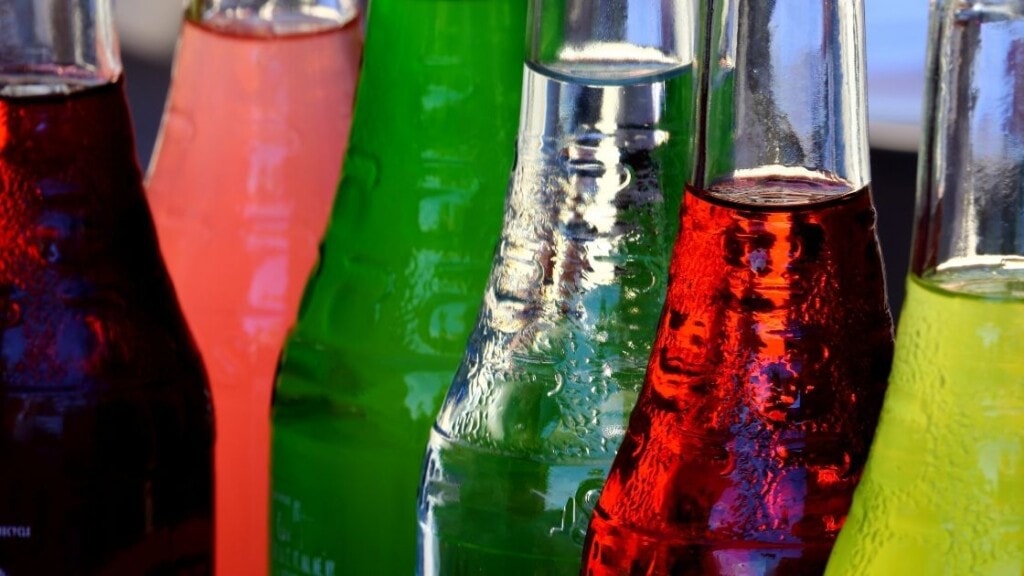 One can of soda is easy to drink and the same is true of a shot of espresso.

And after drinking one of each you can be left wanting to drink another.

The caffeine content in sodas and coffee means you do need to be aware of how much of them you’re drinking, so here’s which has more coffee or soda.

On average, coffee has far more caffeine than sodas that contain caffeine.

As a general rule, only cola’s contained caffeine, whereas, all other soft drinks such as lemonade do not.

Typically, coffee has about 4 times the caffeine that soda has.

Whether to drink coffee vs soda, is not as simple as which has more or less caffeine.

And the total amount of caffeine relative to the recommended daily intake (RDI), is also very important to take into consideration.

As you may know, coffee is made by first brewing a shot of espresso.

It’s then either drunk on its own in a tiny cup.

This dilutes the coffee and it’s still not as strong.

But, for most people, it’s still very strong and gives you a solid boost in energy levels.

A soda that has caffeine contains 24 to 46 milligrams of caffeine.

The caffeine content of coffee is about 4 times that of sodas.

The only soft drinks that contain caffeine are colas like Coke, and energy drinks.

Drinking coffee as part of a daily routine is perfectly fine, provided you don’t drink more than 4 cups of coffee.

This is because the recommended daily amount of caffeine per day is 400g, according to the US Food and Drug Administration.

But, about half that for pregnant women.

So, you don’t need to feel guilty about having more than one good cup of coffee.

People have done research studies into the health benefits of coffee. It was found that a 12-ounce cup of coffee  (1.5 standard cups) contains a high amount of the nutrients shown in the table below:

But, hardly any of the other vitamins and minerals.

The central nervous system can generally get really wired up after 2 cups of coffee back to back.

And it is one of the effects of caffeine when you consume a lot all at once.

This is an effect of all caffeinated beverages and something to watch out for if you’re drinking a lot of soda with caffeine, or energy drinks.

So, it’s best to space them out a bit.

And only drink one coffee in the morning, or in one sitting say in the afternoon or at morning tea time.

You may have noticed that coffee makes you smarter, and better if you’re doing thinking type work such as for university, or work on a computer.

Interestingly, this has been confirmed in a study that caffeine does increase brain function.

Cold-brew is another way to get the health benefits of coffee and can be a better choice to get a caffeine fix in the summertime, or if you live in a hot climate.

Some people follow a keto diet, and it’s seen as a healthier option especially if you are looking to lose weight.

This is where you don’t consume foods that are high in carbs.

This is because it increases the calorie count of your diet.

Which is counterproductive to weight loss.

So, if you’re in this category there are what are called keto coffees.

I wrote more about how to make one, and the different ways to make one in this article about keto coffee recipes.

Caffeine also gives you an energy boost, which can increase athletic performance, give you more drive and increase your physical performance when you’re doing a workout or sport.

Here’s an interesting video that shows the effects of caffeine on the body and brain:

These are made with additives that are extremely low or zero carbs.

The main takeaway is that you want to also limit the amount of sugar, and ideally use naturally low-carb sweeteners such as stevia.

Otherwise, you should limit how much you add to about 2 teaspoons of sugar per day when on a keto diet.

If you use more sugar than that it will be hard to stay under the recommended calorie count.

An average soda contains far more sugar than you would first think.

A regular coke or mountain dew contains about 10 teaspoons of sugar according to Progressive Dental Care (source).

This makes them one of the most sugary drinks you can consume.

What Is Healthier Coffee or Soda? 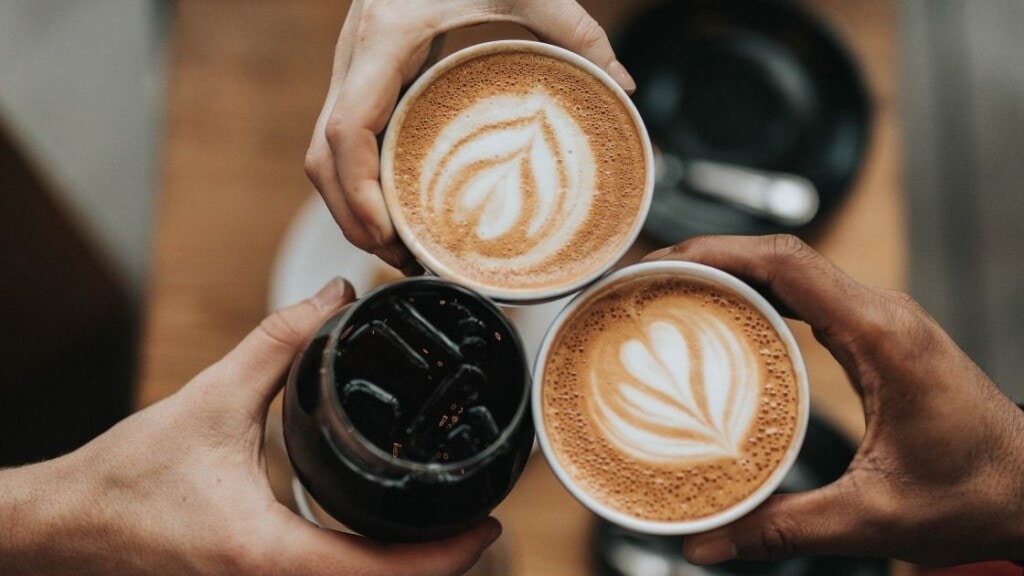 Coffee beans are all-natural and grow on the coffee plant whereas sodas are generally made with artificial flavors.

But, both are very popular drinks, so it can lead some people to question which is healthier for you, coffee or soda.

This is the bottom line about which one is healthier.

Overall, coffee is healthier than soda.

The main reason is the sugar content in sodas is typically quite high, and drinking a few cups of popular soda would cause a person to reach the recommended daily intake of sugar.

Coffee also contains many beneficial nutrients that sodas don’t have.

Another common drink that gives you energy is cocoa made from cocoa beans.

Drinking cocoa is a good way to reduce your caffeine intake but still drink something similar in color, flavor, and texture to coffee.

The caffeine in cocoa is about 10% of coffee caffeine.

This can really help if you find you drink too much coffee.

According to the American Heart Association, there is no link between coffee and heart disease.

Heart disease is one of the leading causes of death, so this is great news if you’re a coffee lover like me.

You’ve likely noticed that sodas have a slightly bitter taste.

This is because they are slightly acidic.

A can of soda like Coca-Cola contains 12.5% of what is considered a safe amount of phosphoric acid.

Coffee and coffee drinks can also have a bitter taste.

The main acids in coffee are chlorogenic acid and quinic acid.

However, currently, there is no evidence to suggest either causes negative impacts on your health.

In recent years studies have looked at the beneficial impacts of chlorogenic acid.

But, so far the results are inconclusive. Harvard School of Public Health found that coffee in fact increases heart health and reduces the risk of getting skin cancer.

Mocha drinks have sugar already added to them.

Which can make them similar to sodas.

This forms from the reaction of the CO2 gas used to make them fizzy.

I explained this in detail in this article about why soda water tastes bitter.

The amount of acid in soda is much more than in coffee, this can be seen by looking at the pH level of soda compared to coffee.

A lower pH means something is more acidic. Coffee has a pH of about 5.

Soft drink consumption is generally fine provided you don’t drink more than half a cup or a cup of soda that contains sugar.

The reason is most sodas have relatively high sugar content.

The good thing is most sodas have a sugar-free/diet/zero flavor option as well.

Too much soda sweetened with sugar or sugar substitutes such as corn syrup for prolonged periods is linked to a higher risk of developing diabetes, heart disease, and high blood pressure.

Caffeine-free sodas include virtually all sodas except for colas.

The one exception is energy drinks which tend to have high caffeine levels.

The best way to know exactly is to look at the nutrition label to see if a soda contains caffeine or not.

But, as a general rule, any soda that isn’t an energy drink or a cola won’t contain caffeine.

Decaf coffee contains much smaller amounts of caffeine than regular coffee and is good for reducing your caffeine consumption.

On average, decaf coffee contains 3% of the caffeine that regular coffee has.

However, the flavor tends to not be as strong as coffee which I personally prefer.

Which Is Worse Diet Coke or Coffee? 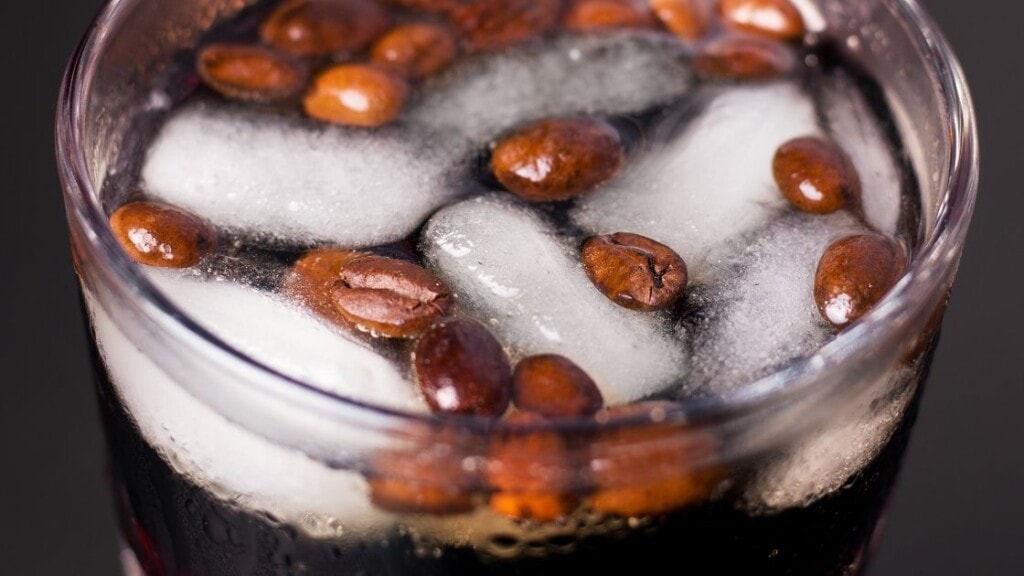 A coffee first thing in the morning is a very popular way to start the day but, it can also be a good afternoon to pick me up.

Sodas aren’t generally consumed for breakfast but colas such as Coke and Diet Coke can be an alternative to coffee in the afternoon because they also contain caffeine.

I wanted to know which is better for you coffee or diet sodas like Diet Coke, so I looked into it, and here’s which is worse for you.

As a general rule, diet coke is worse than coffee.

Coffee contains many beneficial nutrients such as magnesium, potassium, thiamin (vitamin B1), riboflavin (vitamin B2), and niacin (Vitamin B3).

Whereas, most diet sodas contain next to no beneficial nutrients.

As you may know, diet soda has less sugar than regular soda.

And ‘zero’ sodas contain no sugar at all.

Because of this fact, a diet soda like a diet Coke generally has close to zero calories.

This makes them a better alternative because they still have a sweet taste but have a lot less sugar.

This puts them on par with a cup of black coffee, which generally doesn’t have much sugar.

However, provided you don’t add ice cream to your coffee, an Affogato, the sugar levels will be reasonably low.

High-calorie sodas include almost all sodas except for those with artificial sweeteners.

They contain a lot of sugar and/or high-fructose corn syrup.

This can give you a temporary sugar rush, similar to the energy you get from a coffee.

Interestingly, green tea also contains caffeine but has about half the caffeine than a cup of coffee has.

And can be a good way to limit your coffee consumption.

For example, instead of a morning cup of coffee, you could have a cup of green tea.

It’s a better alternative especially if you drink a lot of coffee during the day.

The main reason is the color.

But, it’s actually made from the leaves of the same plant teas such as Ceylon tea, and English breakfast is made from.