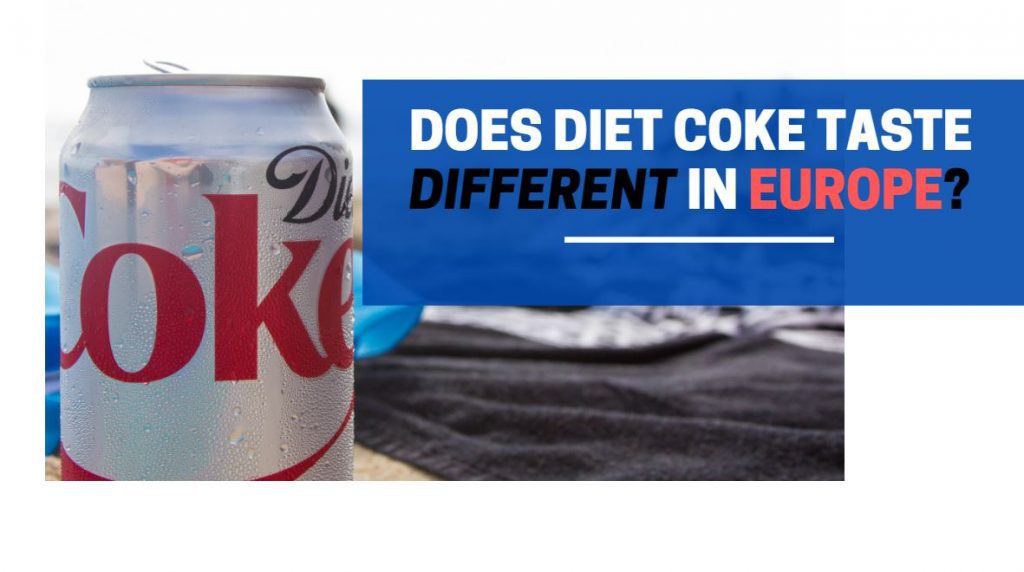 Everybody knows that if you purchase regular Coke that comes from Europe or Mexico, it’s going to taste differently because they use regular sugar instead of high-fructose corn syrup.

Whether or not that has an actual effect on the taste, is primarily up to you the taster.

However, there are blogs and videos and a podcast devoted to the reasons why Coca Cola that comes in little glass bottles and is reportedly made with real sugar is so much better than the high fructose corn syrup stuff made in the United States.

But that is classic Coca-Cola.

What about diet coke?

Yes, it does taste different.

But first, you need to realize that they also have 2 types of brands in Europe, 1 being Diet Coke and the other being Coke Light.

When comparing the USA version with Europe’s the primary difference is the noted in ingredient list wherein there is a lack of potassium benzoate in the European version Versus the US diet coke.

I’m going to delve into this a little further and explain the reasons why.

What effect does this have on the taste?

stick with me as I explain;

Well, potassium benzoate does add a little bit of bitterness to whatever it’s in.

In fact, it is sometimes used as a natural flavoring agent because of this.

We also know that Coca-Cola company will change the formulation of its soft drinks depending on the region.

But why is this?

But Diet Coke is something you see nearly everywhere you go.

How does its taste differ when you go to different countries.

And what about when you get a Diet Coke at McDonalds?

Why does a Diet Coke from Mcdonald’s taste so much better from their fountain than when you pop open a can?

Let’s take a look at those questions.

Diet Coke in Other Countries

Diet Coke was launched in 1982 and was the first-ever Coca-Cola that was available without sugar.

It quickly became the biggest selling low-calorie soft drink in the United States.

Once Coca-Cola realized that it had a winner on its hands, it quickly introduced it into other markets, beginning with Great Britain in 1983. Today, Diet Coke is available in over 200 countries.

According to the Coca-Cola company website, people will import Coca-Cola, Coca-Cola Zero, and Diet Coke into countries where it isn’t manufactured.

As with Diet Coke that is made in Europe, the formula for Diet Coke in different countries will vary.

One blatant example of this is in Canada, where the ingredient list for Diet Coke includes some things you don’t find in the United States.

You can see that like in Europe, Canada adds a benzoate (although in this case it’s sodium benzoate instead of potassium benzoate), and it also adds acesulfame-potassium.

Acesulfame-potassium (also known as Ace K) is a calorie-free sweetener that is about 200 times as sweet as normal sugar.

However, it has a slightly bitter aftertaste, so it is commonly used in combination with other artificial sweeteners to mask the taste.

It has the same sweetness level as aspartame, which makes it easy to mix the two.

The individual particles of Ace K and aspartame are the same size as well.

How Does That Change the Taste?

What this means for flavor is that if you get a Diet Coke in Canada, you’re going to notice a different aftertaste than you’d get from one that you get in the United States.

And this flavor difference isn’t just for the neighbors to the North.

What About Coke Light?

If you’ve been overseas, you may have found a curious drink called Coca-Cola Light.
Coca-Cola Light is a low-calorie soft drink. You can only find Coca-Cola light in countries where cyclamates are still able to be used in foods. Coca-Cola Light has a lighter taste as compared to Coca-Cola zero.

Cyclamates are another type of artificial sweetener that used to be popular in the United States but fell out of favor.

Cyclamates were discovered in the 1950s and were quickly approved as a sweetener that was generally recognized as safe (GRAS) by the FDA.

They were used in a lot of products.

In 1969, however, a research group conducted a study that involved rats and found that the sweetener called Sucaryl (which was nine parts cyclamate and one part saccharin) lead to the rats developing bladder cancer.

Of course, the rats were fed the equivalent amount of Sucaryl as that found in 800 cans of soda, but the damage was done.

Sucaryl and cyclamates were pulled from the market, and despite the finding in 1984 that cyclamates are not a carcinogen, they are no longer used in the United States.

So Why Coke Light vs Diet Coke?

However, over 50 countries outside of the United States do use cyclamates in products as an artificial sweetener, and this includes Diet Coke.

However, Coca-Cola company still manufactures a diet cola that uses the traditional blend of sweeteners that includes aspartame in those countries, so a different brand name was needed.

So, Coke Light was created as a way to manufacture and bottle that type of diet soda so as not to create confusion over imported sodas that use traditional aspartame sweetening.

People who drink Coke Light say that they love the way it tastes and that it has a much different aftertaste and flavor profile from Diet Coke.

They also mention that Coke Light has a different level of carbonation.

There are users on Reddit and other forums who proclaim their love of Coke Light, so if you ever find yourself somewhere it is sold, you may want to give this different formulation a try.

When you get a Diet Coke from a fountain, there’s something that’s different from when you get it from a bottle or a can.

There’s a reason for this, and the biggest reason is because of the primary ingredient: water.

Diet Coke is made by combining a concentrated syrup with carbonated water.

The water itself is carbonated on demand in the restaurant.

It’s not like McDonalds or your local gas station have a giant bottle of seltzer water under the counter.

Instead, as they dispense Diet Coke (or any other soda), a giant canister of carbon dioxide pushes gas into the water, creating carbonated water as its needed.

What Makes McDonald’s Coke Taste Better Than Other Coke? 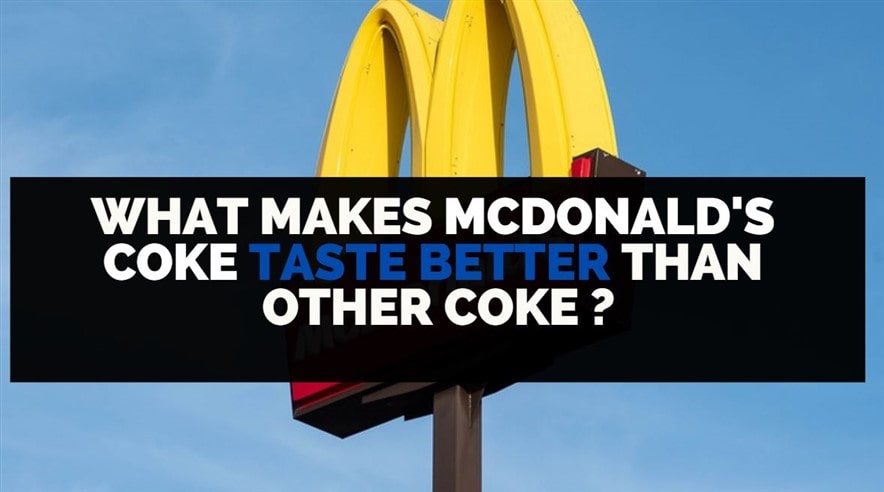 This can cause a wide range in the tastes of your Diet Coke depending on several different factors.

For example, if the water that is used is filtered, it can affect the taste.

McDonalds and other restaurants often use a multistage filtration device to remove impurities from the water and create a uniform taste for their soda across their franchises.

But if you go to a smaller store, they may not filter their water.

That can create a different taste.

Another factor is the amount of carbonation that is used.

Depending on how much carbon dioxide is pushed into the water, combined with the temperature of the water itself, the fizziness can change from super fizz to just so-so.

Lastly, one of the biggest contributors to why McDonalds and other fountain dispensers serve Diet Coke that tastes different is the amount of syrup that is used.

The traditional amount is 5 parts water to 1 part syrup. However, many places, including McDonalds, counts the amount of water that is created by melting ice into that ratio.

So if you get your Diet Coke without ice like a lot of people, you may be getting your Diet Cokes with a little more syrup, which translates to a more intense taste.

Lastly, if you wonder why we singled out Mcdonald’s, it’s because they have a special contract with Coca-Cola.

Did you know that the syrup for Coke products for Mcdonald’s is delivered in special stainless steel tanks?

That’s so the syrup stays fresher for longer.

So, the age of the syrup must play a significant part in the taste of a Diet Coke, or why would they bother?

When it comes to Diet Coke that you find in Europe, it definitely is going to taste different than the diet coke that you find in the United States.
That’s because there is a difference in regulations about what can be put in food and what processes are more accepted.

For example, in the United States, high fructose corn syrup is extremely cheap because we grow a lot of corn.

While in Europe, high fructose corn syrup is extremely expensive, therefore it’s found in almost nothing.

So the next time you’re wondering, yes there is a difference, and yes you will definitely notice it.