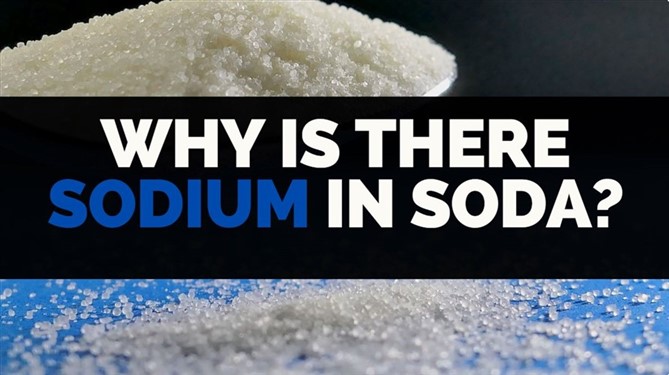 For many people, healthy living includes monitoring their diet and taking care with what they eat.

This includes monitoring their sodium intake to be under the daily recommended allowance of 1500 milligrams.

But if you are watching your sodium intake, you’ve got to be careful of hidden sodium content; it can pop up in a lot of surprising places. So you may wonder why a 12 ounce can of regular Coke or Pepsi has 30 to 45 milligrams of sodium in it.

Why is there sodium in soda?

There are 2 main reasons Sodium is added to your soda and 3 actual sources of it ;

But how and why does sodium in soda make it do that?

Let’s start at the beginning and i’ll cover these additives and sources in a bit more detail:

What’s in That Coca-Cola (Or Pepsi)?

If you look at the ingredient list for Coca-Cola Classic or regular Pepsi, you’ll find that they have pretty much the same ingredients.

So let’s start with the first ingredient in the list on both:

Now you might think that carbonated water is just water with dissolved carbon dioxide, and nobody can blame you for that.

When carbonated water started to be mass produced, manufacturers would add salt to it.

The salt helped to make the water less bitter, and give it a more pleasant taste. In fact some naturally occurring carbonated waters start off being carbonated by dissolved limestone (calcium carbonate) and then absorb dissolved minerals like sodium bicarbonate (baking soda) found near the limestone deposits.

So it’s entirely possible that there is some sodium that comes with the carbonated water.

You might wonder why Coca-Cola or Pepsi doesn’t have to say that the sodium is in the carbonated water, but according to the FDA, this would be considered an “incidental additive” because it is “an ingredient of another ingredient.”

And from the FDA regulations regarding food labels and ingredient lists, incidental additives don’t need to be listed.

And, surprisingly, according to the nutrient information label that the FDA has on record, 100 grams of high fructose corn syrup has 2 milligrams of sodium in it. So that’s one source of sodium in your soda, but not nearly enough to account for 30 milligrams in a 12 ounce container.

Caramel color is an ingredient that is used to give foods a brownish color. This spectrum can range from pale yellow to a dark brown.

There are four different classes of caramel colors, ranging from Caramel I to Caramel IV.

Caramel I is used to color high-proof alcoholic beverages, II is used for cognacs, sherry, and vinegars.

Caramel III is used for beer, candy, and soy sauce, while IV is used in dark breads and soda.

So what is in Caramel IV?

While normal caramel is made by heating sugar until it melts into a soft sticky mass, caramel color is not meant to be a flavor.

It’s a color, and as a flavor, Caramel IV (or Caramel 150d) tends to be bitterer in flavor.

It is prepared by “heating carbohydrates with or without acids or alkalis in the presence of both sulfite and ammonium compounds.”

The carbohydrates are usually glucose, fructose or some derivative of those.

The acids are usually either sulfuric or citric acid, while the alkalis are a chemical hydroxide.

The ammonium compounds used to make Caramel 150d can be any of the following:

And in that last sulfite compound, we find another hidden source of sodium.

But can there really be 30 milligrams of sodium in the color by itself?

Probably not, so let’s look at the remaining ingredients.

Phosphoric acid has the molecular formula of H3PO4 or H3O4P.
Sodium has the chemical abbreviation of Na, so there’s not sodium to be found in phosphoric acid.

In case you’re wondering, phosphoric acid is put in soda to give it their bite and sharp tang.

Additionally, it helps to prevent the growth of bacteria, which might otherwise flourish in the sugary soda.

Caffeine has the chemical formula of C8H10N4O2.
This means that it also has no sodium in it, and doesn’t contribute any sodium to the soda.

Caffeine is in soda because Coca-Cola was originally made using extracts of the kola nut.

Kola naturally contains caffeine and is often chewed or used to stay awake and as an appetite suppressant.

So, rather than remove the stimulant, caffeine has always been there.

This is likely where the majority of sodium in your Coke or Pepsi is found.
The exact blend of natural flavors is a mystery, because they are part of the recipe that is kept a closely guarded secret by their respective manufacturers.

And because these are trace amounts that provide only flavors and contribute no nutritional value, they can be lumped together under the listing of “natural flavors.”

Keep in mind that a natural flavor doesn’t have to be something found in nature, just that it contains the flavor of something.

So by reviewing all of the ingredients that Coca-Cola and Pepsi have in common, we have found three sources of sodium.
First, the carbonated water may contain trace amounts of sodium bicarbonate which acts as a flavor and is an ingredient, so it doesn’t have to be listed.

Second, the caramel color in soda is often made with a sodium sulfite agent, which would add sodium as well.

Third, sodium may be found in the natural flavor, which enhances the flavor of Coke or Pepsi that millions love and adore.

So it looks like sodium is there to make your soda taste good and make it taste like you expect it to. And don’t think that either company is going to change their formula anytime soon; you may not remember the disaster that was New Coke, but trust us, they do.

We can definitively tell you why sodium is not excluded from soda, and that’s to act as a preservative.

The FDA is very careful to require that any and all preservatives in any food is labeled as such. According to the rule 501.B.501.22.j:

“A food to which a chemical preservative(s) is added shall, except when exempt pursuant to 501.100, bear a label declaration stating both the common or usual name of the ingredient(s) and a separate description of its function, e.g., preservative, to retard spoilage, a mold inhibitor, to help protect flavor or to promote color retention.”

So while Phosphoric Acid may help to preserve the food, that isn’t its primary goal, it’s just a perk.

Additionally, Coca-Cola is specifically labeled to say that it has no preservatives.

Therefore, despite what you might read elsewhere, sodium is not in your soda to keep it fresh.

So if you’re looking at food labels and wondering why your soda has sodium in it, it’s just there to make it taste like you remember.
The coloring and the carbonated water may contribute trace amounts, but that’s not the primary source by any means.

Looking for the reasons why your foods have certain additives in your quest to be healthy is great, and we hope that we have helped you find the answer to your question.

If you have any comments or concerns, please let me know.