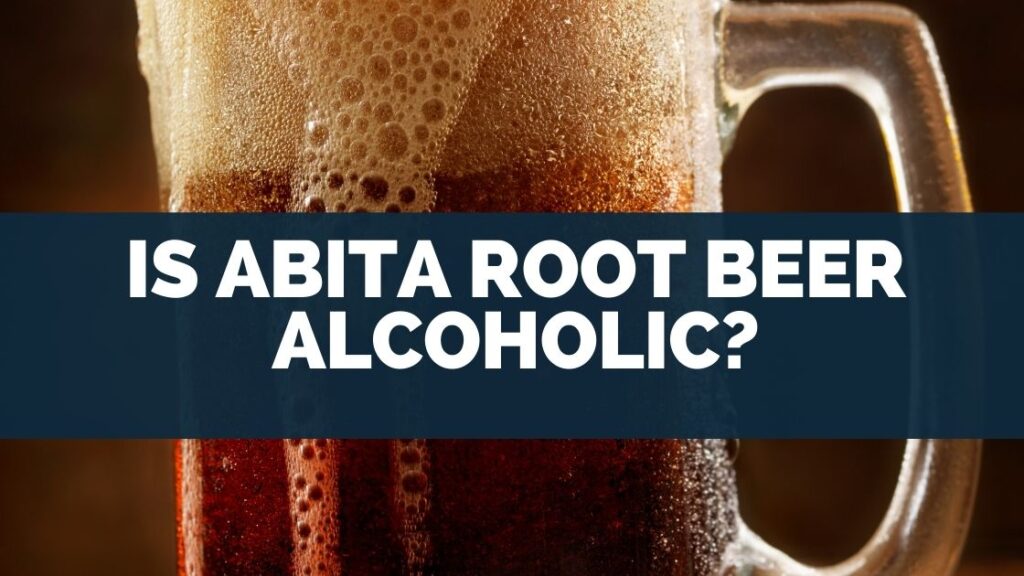 I’ve been trying a bunch of different root beers lately, and I was wondering whether Abita Root Beer is an alcoholic drink.

However, they do not make a hard root beer – a root beer that contains alcohol.

Abita Root Beer tastes as you’d expect a root beer to taste, however, doesn’t have a licorice flavor like some root beers.

In this article, I will explain the nutritional information about Abita Root Beer, and its ingredients.

Is there alcohol in Abita Root beer? 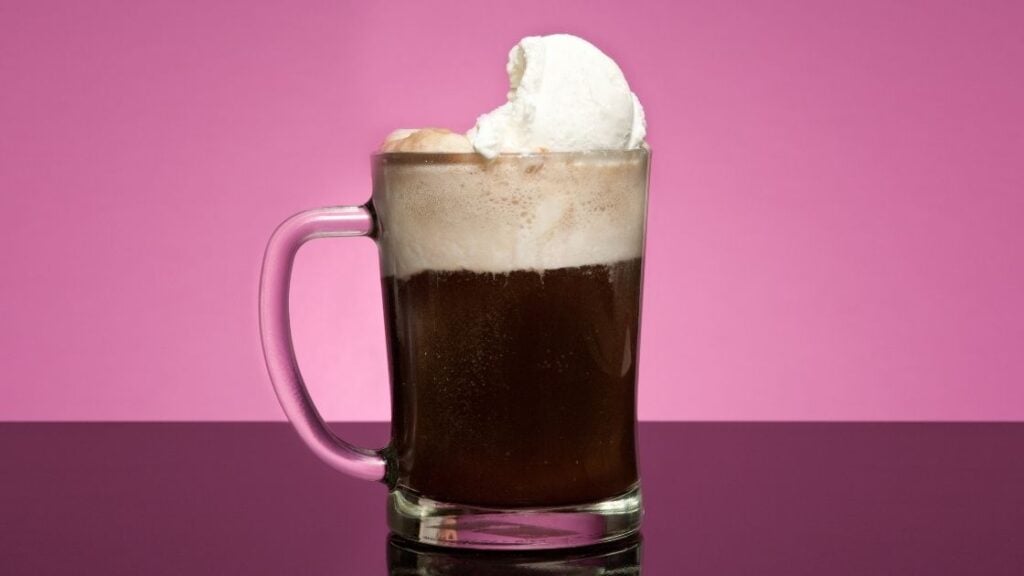 Abita is best known for its alcoholic drinks.

So, it seems odd that there isn’t any alcohol in Abita Root Beer…

The official ingredients on the label does not state that it contains alcohol.

It’s also in the soda category of their website alongside their other sodas Vanilla Cream Soda, and King Cake Soda.

However, they sell around 20 other alcoholic drinks.

However, it has currently been discontinued and is available for purchase.

Their other drinks are quite unique. For example, they make a lager called Strawgator which is 8% alcohol.

That is a slightly higher alcohol content than a standard beer. A typical beer only has 5% alcohol.

The number refers to the coordinates of New Orleans where the Abita is proudly from.

How does Abita Root Beer taste?

Overall, it has a crisp and light taste that isn’t heavy at all.

As you may know, it doesn’t contain high fructose corn syrup.

Instead, it uses sugar. However, it is common for sodas to use high fructose corn syrup.

For example, Coca Cola made in the USA and Canada contains high fructose corn syrup.

However, Coca Cola made in Mexico contains raw sugar.

However, the difference is only noticeable if you compare the 2 Coca Cola’s side by side.

So, in my opinion, I don’t think it’s a major factor that Abita Root Beer is made with raw sugar.

But, it’s nice to know it has not been heavily processed like high fructose corn syrup.

Many people wonder whether high fructose corn syrup is good for you.

I recently looked at some scientific studies to answer this question and put what I found together in an article.

Read it here –  does coke use corn syrup.

Overall though, Abita Root Beer does not have a strong licorice taste which is common in other root beers.

And has a vanilla smell. Another popular root beer – Barq’s – is known for having caffeine.

That gives you a boost like a cup of coffee. But, Albita root beer doesn’t have that.

However, overall it’s a run of the mill average root beer. With a refreshing taste that, if you like root beer, is very delicious with a meal, to sip on its own, or to use as a mixer with alcoholic drinks.

Does Abita Root Beer Have Caffeine? 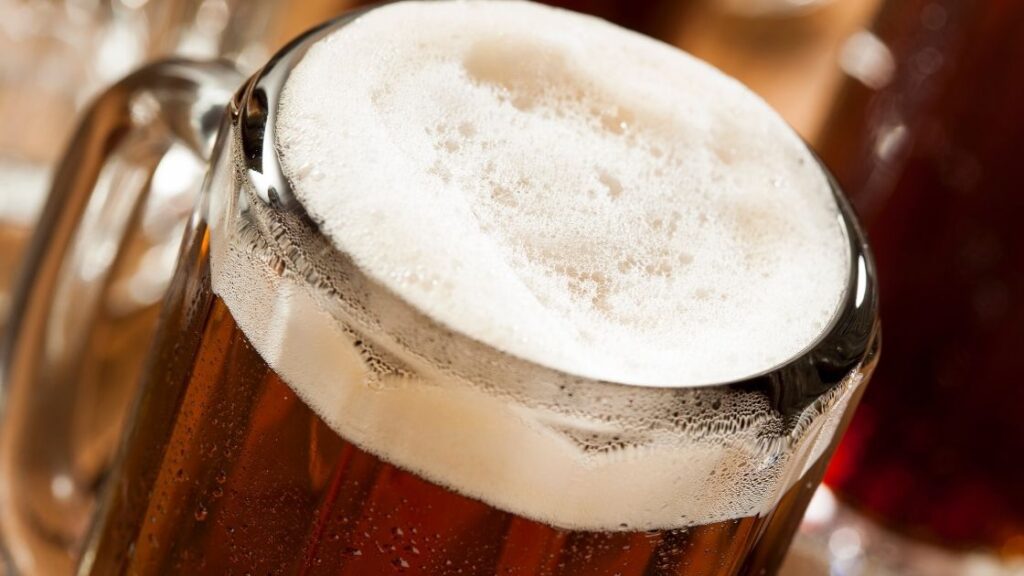 And you may be wondering whether Abita Root Beer contains caffeine.

Abita Root Beer does not contain any caffeine.

If caffeine was present in Abita Root Beer it would be listed as one of the ingredients on the nutrition label.

Caffeine is typically only added to colas where soda companies like Coca Cola say that it is used to improve the taste.

In rare cases, a root beer will contain caffeine such as Barq’s.

However, for the most part, root beer is typically non-alcoholic. 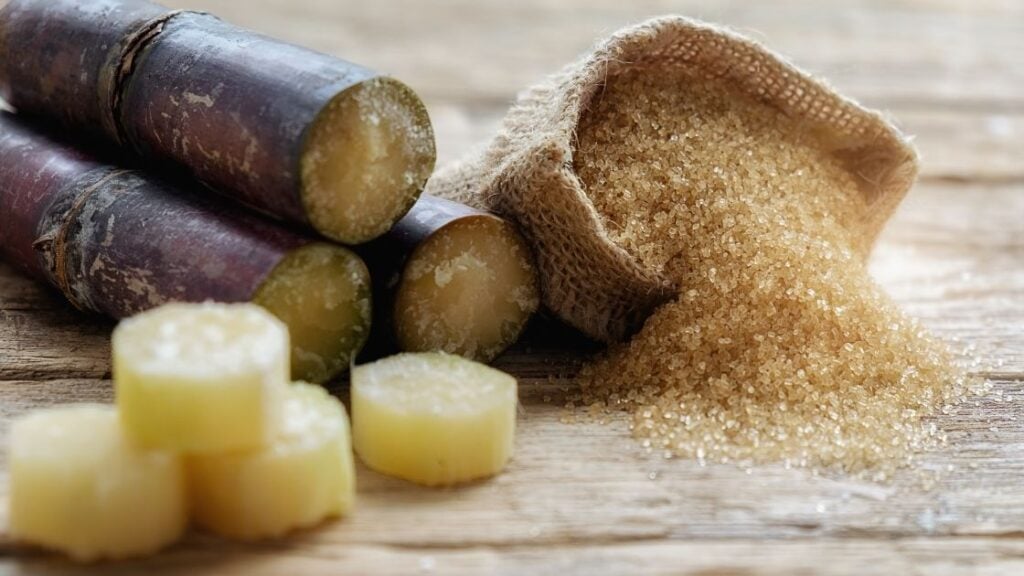 Now, you have an idea about how it tastes, and whether it has alcohol.

So then what exactly is in Abita Root Beer? Here’s what’s shown the nutritional label:

The main difference in ingredients between Abita Root Beer and other sodas is the lack of high fructose corn syrup.

Also, they don’t state whether the root beer flavor is natural or artificial which most sodas normally do.

However, they state that they use spring water from wells in New Orleans.

The other ingredients in Abita Root beer are virtually the same as what’s found in other sodas.

But, I was also wondering if it has as much sugar as other sodas…. 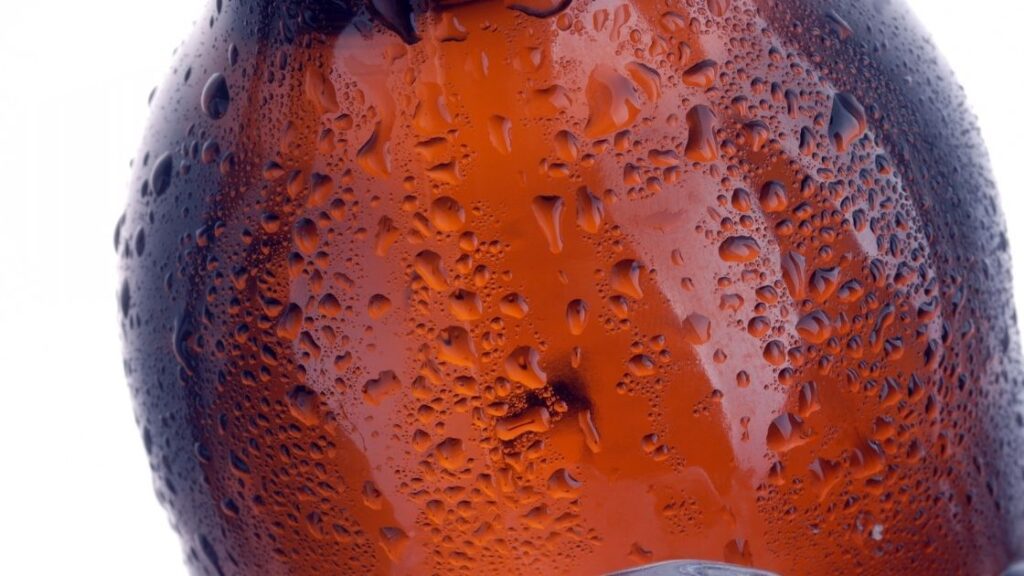 Generally, with sodas sugar is a major concern, as well as caffeine.

We’ve all heard stories of a gamer who nearly died by drinking energy drinks 48 hours straight and playing computer games.

That clearly is not a healthy diet so then how good is Abita Root beer for your health?

The amount of sugar in Abita Root Beer is virtually the same as what is found in other popular root beers such as Barq’s.

It’s generally recommended to only consume around 37g of sugar per day.

Therefore, you should only drink around 1 to 2 cups of soda a day at the most.

On a normal day, you will typically get sugar from other sources such as in your coffee/tea, a chocolate bar, or a donut.

Abita Root Beer is very tempting however because it goes so well as a root beer float.

Simply pour it over some vanilla ice cream on a summer’s day to create a fantastic drink.

Abita Root Beer has a vanilla flavor and therefore is a great mixer with:

And making your own alcoholic root beer is really each.

A good starting amount is to add 1 shot glass of alcohol to one glass of root beer.

In that amount, you can barely taste the alcohol.

As you get more intoxicated you can taste the alcohol less and less.

Therefore, you can add more alcohol to taste.

Interestingly, of all the sodas Coca Cola has significantly more sugar.

Here’s a table that shows a side-by-side comparison between Abita Root Beer and Coca Cola.

However, if you compare it to say Pepsi or Dr Pepper it has nearly an identical amount of calories and sugar. 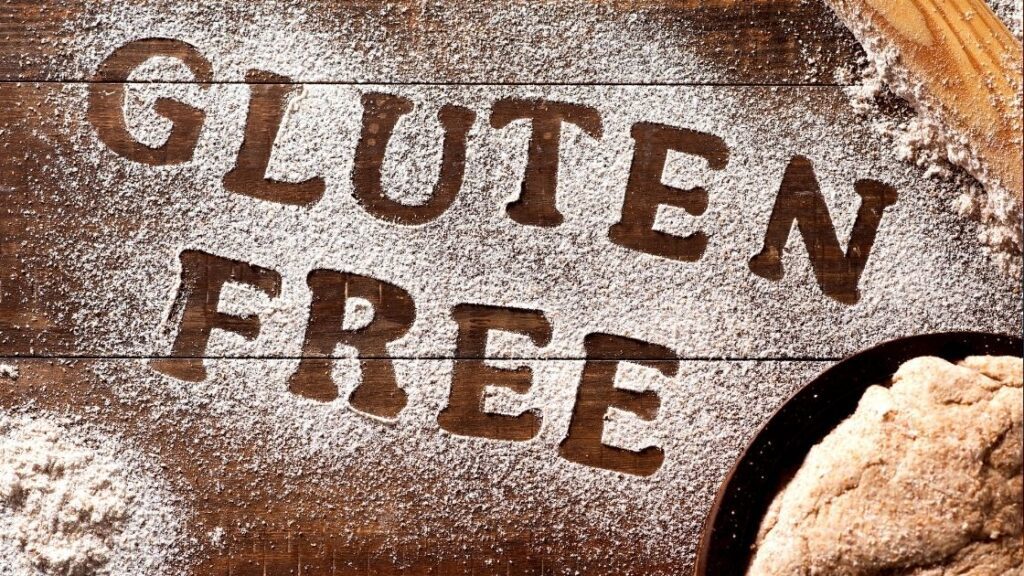 Many people are gluten intolerant and certain well known diets like the Paleo diet advises against consuming gluten for the most part.

So, then is Abita Root Beer gluten free?

The reason is that Abita Root Beer is not made from ingredients that contain gluten such as wheat, and barley.

It also contains phosphoric acid which is used to not only improve the taste, but preserves the soda.

Phosphoric acid makes the soda an inhospitable place for bacteria and fungi to grow.

As a result, the soda has a much longer shelf life.

Phosphoric acid is also an ingredient used in virtually all sodas.

It’s also used in a wide variety of products as a preservative or flavor enhancer such as bread and baked goods.

Is there alcoholic root beer? 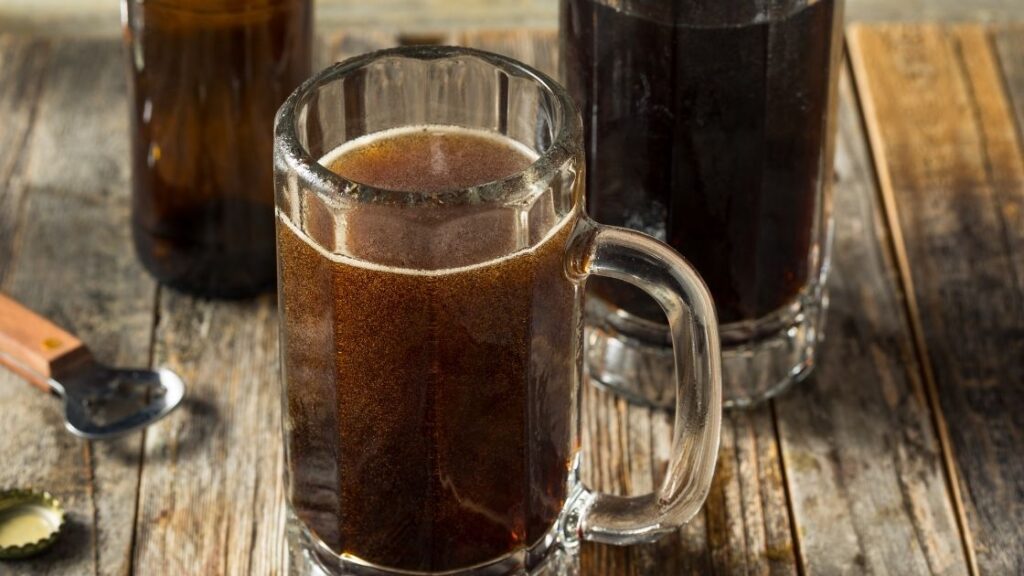 Root beer has the word beer in it. But, it is non-alcoholic like ginger beer.

Has someone ventured to brew an alcoholic root beer and can you buy it?

There is alcoholic root beer.

The distribution of bars and restaurants that sell it is very random and uneven.

Some of the more well known brands of alcoholic root beer are:

Carbonated drinks are generally distinguished as being one of two types.

They are either soft or hard.

A soft soda or ‘soft drink’ does not contain alcohol.

Whereas, a hard root beer or hard ginger beer will contain alcohol.

What kind of beer is Abita? 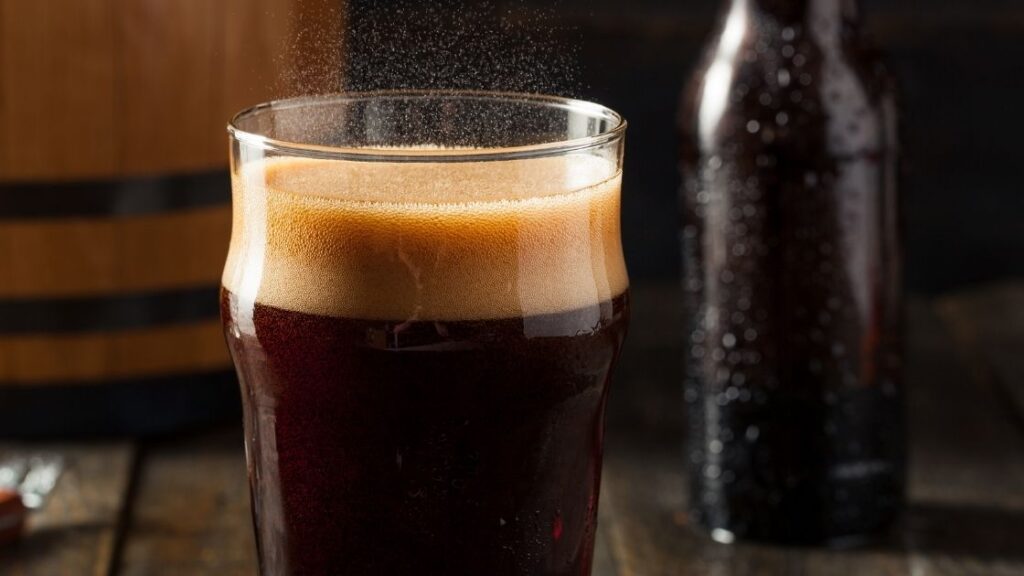 If you’ve come across Abita beer you’re likely interested in what kind of beer it is, and what it’s alcohol content is.

Here’s what kind of beer is Abita…

Abita makes around 20 different types of beer and almost all of them are ales, lagers, and indian pale ales (IPA).

Additionally, they make watermelon and berry-flavored water that is sweetened with cane sugar.

As a general rule, an ale has a more fruit spicy, and lighter taste. Whereas, a lager tastes more full-bodied.

However, there is a lot of variation between different brands. For example, Asahi is a lager.

But, because it’s made with rice it has a slightly aromatic aftertaste.