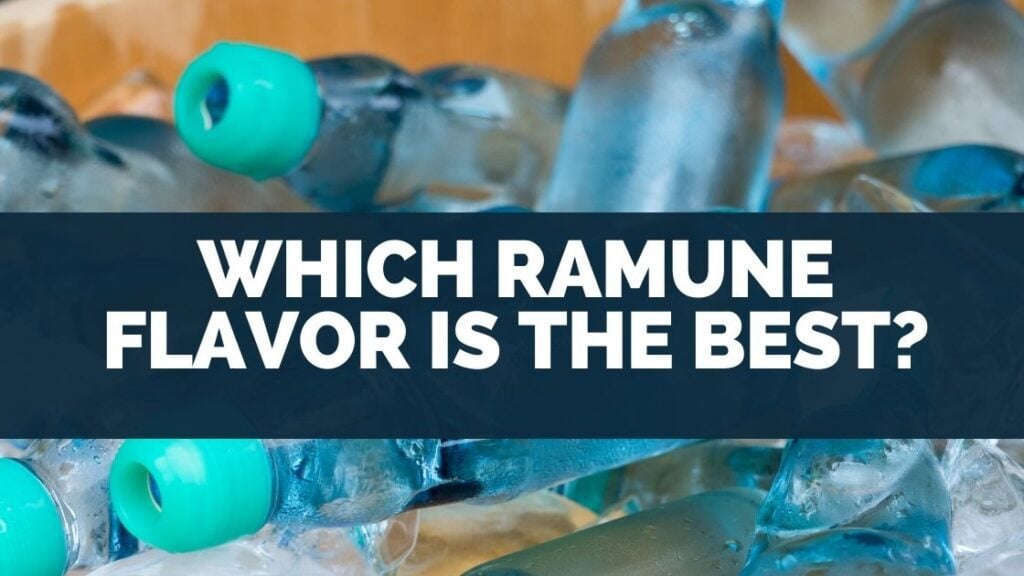 I wondered about how it tastes, and which flavor is the best.

I did some research on this brand and the most Popular Flavors, and here’s what I concluded.

On the whole, the best Ramune flavor is original or lychee.

Other popular varieties of flavors include watermelon, strawberry, and lemon.

The flavor of Ramune is quite unique, it has a strong flavor with a refreshing taste however, people from outside of Japan often find that it has a totally different flavor profile from say a standard soda like Sprite.

My own personal Favorite Flavor is the Original, it’s the Classic Ramune Flavor and brings to life a sensation of japan whenever I taste it.

The main draw of Ramune is that it’s one of only a few brands that use a marble cap to seal the bottle.

The marble is lodged in the bottle, and you need to press it into the bottle to open it using a plastic tool provided.

In this article, I will explain whether Japanese Ramune Marble Soda is better than soda if it contains caffeine if it’s gluten free and if it contains alcohol. 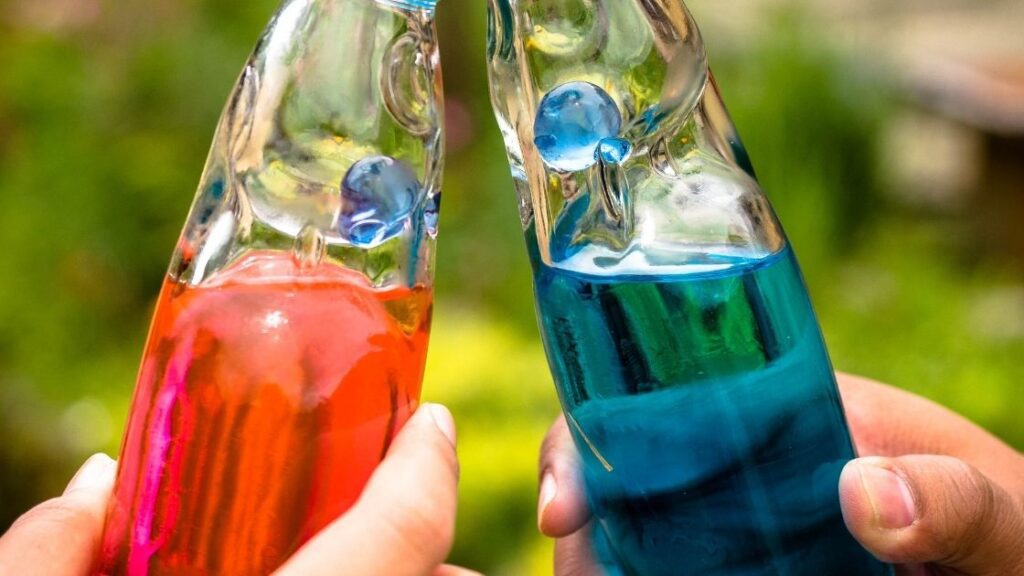 Because Ramune is quite unique, you may be wondering whether it’s better than regular soda, and how it compares.

I looked at the nutritional information about Ramune, as well as its flavor to see whether it’s better than soda.

As a whole, Ramune is not better than soda.

Most people report that besides the interesting bottle, it doesn’t taste as good as regular soda.

Compared to other well-known sodas it has around the same amount of sugar and calories and isn’t any more healthy for you.

For me, it has quite an assertive flavor, a real kick on the taste buds

Interestingly, Coca-Cola is rare in the carbonated drinks/soda world because it has a lot more sugar than every other soda on the market.

Here’s a table that shows the sugar content of popular classic sodas and how they compare to the assortment of flavors available with Ramune – the number 1 Japanese soda brand.

If you do happen to really like Ramune, it’s likely because you’ve consumed it a lot and look forward to the taste.

However, most people who try it for the first time don’t find the flavor significantly better than other fruit-flavored sodas.

You may have also heard of the Japanese soft drink Calpico soda, also called Calpis.

Calpico is very unique and unlike any other sodas.

I wrote an article about Calpico, what it is and how it tastes.

Is There Caffeine in Ramune Japanese Soda? 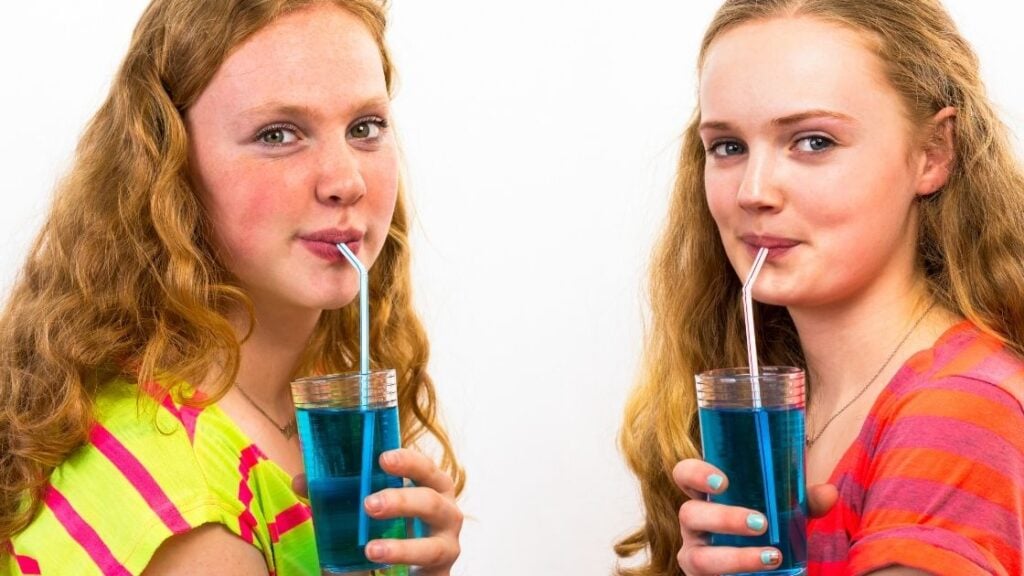 Caffeine is known to give you more focus and energy, but drinking too much caffeine for a long period of time isn’t good for you.

So, I was wondering if there is any caffeine in Ramune?

Ramune does not contain caffeine.

Soda companies will typically add caffeine to their cola-flavored sodas to improve the taste like other Japanese drinks.

However, a careful note shows that Ramune doesn’t add caffeine to their cola, and none of their other drinks contain caffeine based on the ingredients printed on the nutritional label.

Here’s a list of the ingredients found in Ramune cola:

Caffeine is extracted from various plants such as unroasted coffee beans.

It’s then added after the fact to a soda.

However, it’s good to know that if you drink some Ramune soda, you won’t have to skip a cup of coffee! 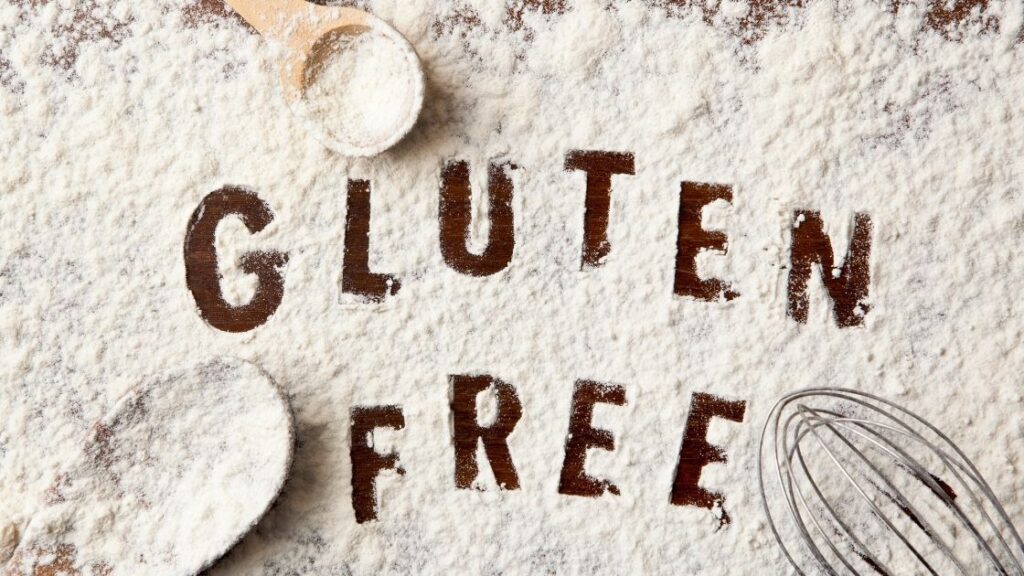 Gluten is known to cause an upset stomach in some people, and some people have celiac disease which prevents them from consuming gluten.

So, then is Ramune soda gluten free?

On the whole, Ramune soda is gluten free.

Sodas in general are considered gluten free by medical professionals, but minor traces of gluten can be present.

However, some foods and sodas can be certified gluten free, which guarantees that they don’t contain gluten.

As you may know, foods that contain gluten are typically made from wheat and barley for example:

Ramune soda is not made with any gluten containing products, and therefore, overall it doesn’t contain any gluten.

Interestingly, this is also true of virtually all sodas including the big names like Coke and Pepsi. 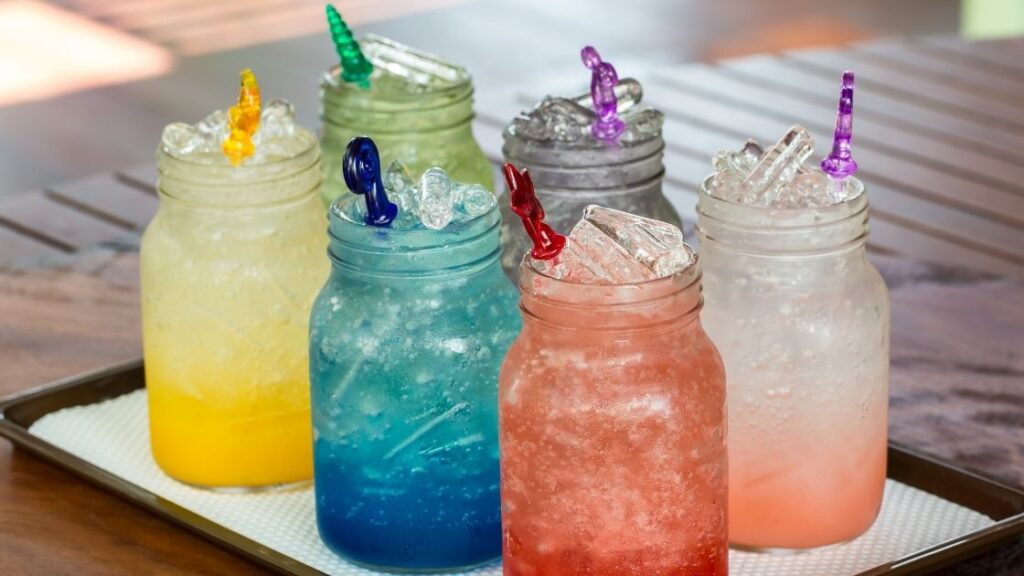 Ramune is quite an obscure soda that isn’t widely available.

Therefore, you may be wondering whether it contains alcohol.

Here’s what I found based on the ingredients.

As a whole, none of the Ramune flavors contain alcohol.

Ramune is technically a soft soda.

Soft sodas don’t contain alcohol, whereas hard sodas do. For example, a hard ginger beer or a hard root beer.

However, Ramune can make a good mixer in alcoholic drinks.

In my opinion, there can be better options for a mixer than Ramune.

And unless you really like the taste of Ramune I would use one of the more well-known sodas.

The reason is that most people who try Ramune don’t particularly think it tastes that great.

The same flavors in the soda will also come through in the mixed drink.

And although alcohol overpowers some of the flavors of a soda, people tend to prefer the taste of well known sodas like Coke and Pepsi.

However, it’s definitely an interesting thing to try.

What flavor is clear Ramune? 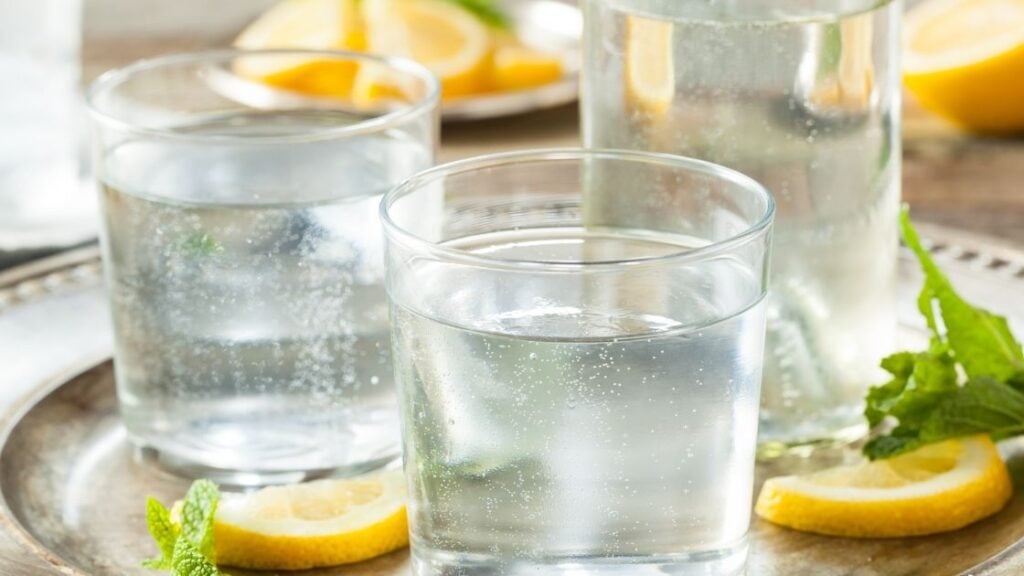 You may have seen a clear bottle of Ramune, and sometimes the bottles have only Japanese writing on them.

So, then what flavor is clear Ramune?

There are a few flavors of Ramune which are clear, they are Original (lemon lime), Melon, Coconut, Orange, and Grape.

Therefore, if it’s a clear Ramune then it can be any one of these flavors.

Ramune Original typically doesn’t say what the flavor is on the bottle, whereas, the other flavor clearly says what flavor they are.

Ramune is a transliteration from English to Japanese.

Ramune is meant to sound like the English word lemonade.

And as you might have guessed, Ramune Original has a citrusy taste like a lemon/lime flavor similar to lemonade.

What’s the point of the marble in Ramune? 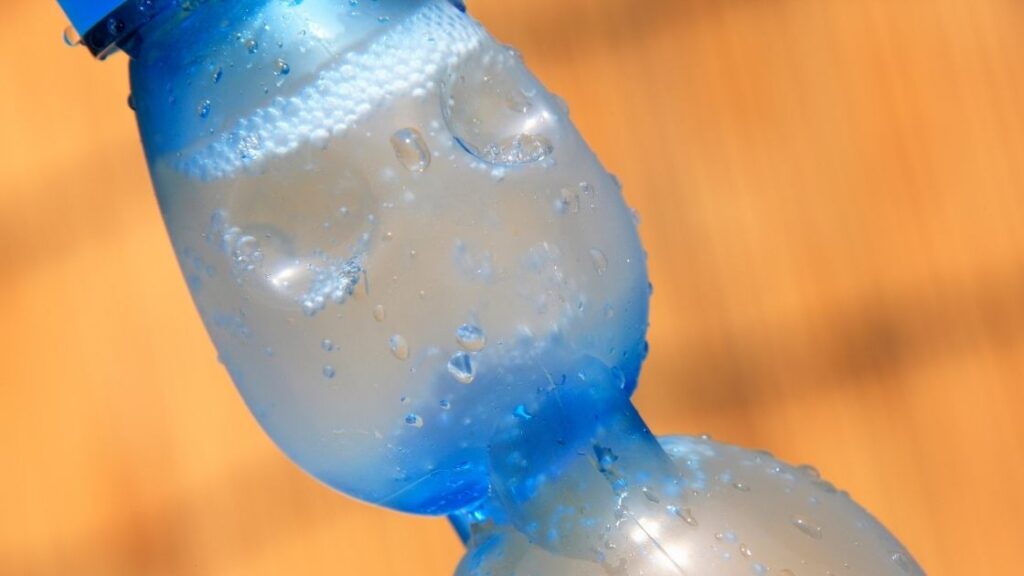 The most distinctive feature of Ramune is the marble that you need to press down and keep out of the neck of the bottle to be able to drink it.

But, what’s the reason why Ramune uses a marble, and what’s it for?

The marble in Ramune is meant to keep the Ramune sealed so it stays carbonated and fresh.

After you push the marble into the soda to open it, it can get stuck in the neck of the bottle, making it difficult to pour.

But, there are small notches on the sides of the neck that keep it in place.

It is somewhat of a novel way to keep a soda bottle closed, and is very interesting. It’s such a cool bottles

In my opinion, because of that people are more apt to try it for the first time – because it stands out amongst other sodas.

It’s also quite fun and interesting to pour and drink.

The main drawback of a marble in a soda is that you generally can’t seal it properly after you open it.

For example, if you wanted to transport it in a bag, the plastic lid that comes with it isn’t 100% secure, and the cap can come off and spill.

Ramune, though, comes in a small cool bottle so you’ll usually drink the whole bottle in one go.

The size of the bottle is smaller than a typical can or bottle of soda.

They also make larger bottles that still come with a marble stopper; some have been available that are up to 33 fl oz (1 liter) in size.

Some people have come up with complex ways to reseal a bottle of Ramune and reuse it.

However, they require a lot of work and special tools. 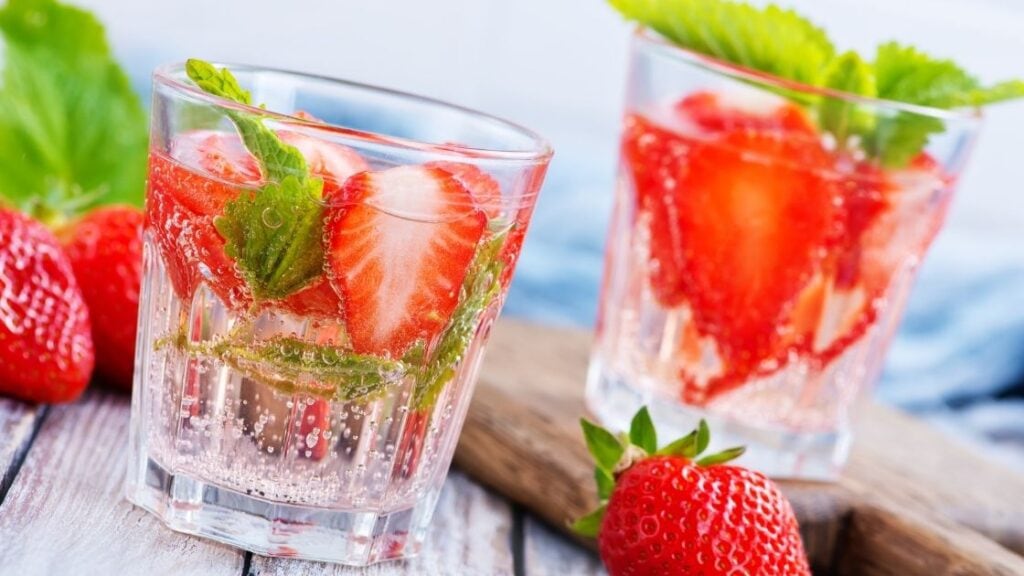 Certain flavors of Ramune aren’t commonly available from other soda providers in convenience stores or supermarkets.

One of which is strawberry flavor.

It has a sweet lemony taste mixed with the taste of strawberry.

People have also commented that it tastes how you would expect a strawberry soda would taste.

However, it doesn’t have a particularly special flavor.

This is true of most of the Ramune soda flavors.

They taste OK but aren’t necessarily a soda that you would choose over another.

In my opinion, it’s a solid soda that quenches your thirst when you have a craving for a soda.

But, overall is largely similar to any other soda on the market.

The unique thing about Ramune isn’t the taste, but rather is the marble that’s used to keep it sealed.

Can you drink Ramune from the bottle?

Because of the interesting marble seal that a Ramune bottle has, I became curious about whether you need to pour Ramune in a cup to drink it, or if you can drink it straight from the unusually shaped bottle.

It’s perfectly fine to drink Ramune from the bottle.

You sometimes need to tip the bottle slowly so that the marble doesn’t get back into the bottle neck and block the soda from coming out.

But, other than that you can quite easily drink Ramune straight from the bottle.

Well, there you have it, everything about what flavor of Ramune is best and how it compares to other sodas.