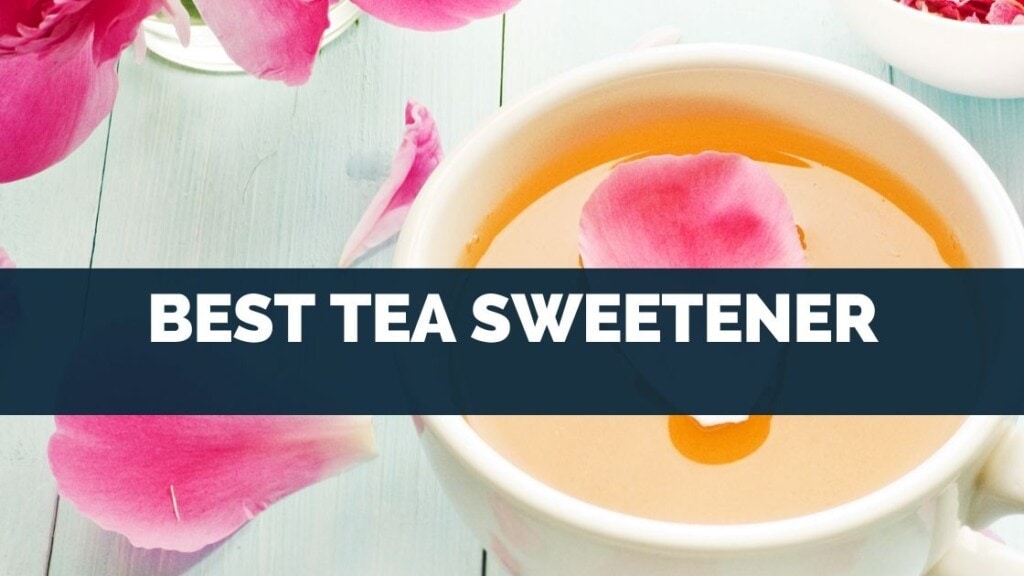 Many types of tea have a bitter aftertaste, and many people prefer the taste of tea that is sweetened.

There are a range of different sweeteners that can potentially be used in tea.

Here’s what the best tea sweetener is and why.

Overall, stevia is the best tea sweetener because it contains no sugar, and no carbs.

It has all the benefits of artificial sweeteners but is made from all-natural sources.

It’s made using the juice of the leaves of the stevia rebaudiana plant and is 200 to 400 times sweeter than sugar.

In this article, I will cover what sweetener is the healthiest for tea, whether stevia tastes good in tea if stevia is healthier than sugar, and how much stevia you should add to tea.

What Is the Healthiest Sweetener for Hot Tea? 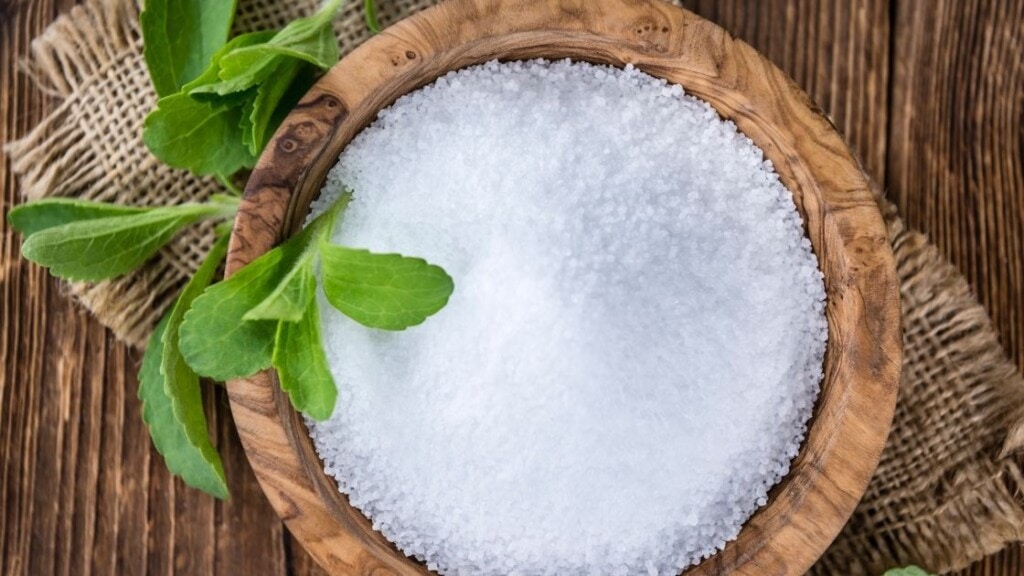 If you’re anything like me you have a real sweet tooth and love sweet foods.

But, most of the popular sweeteners are high in calories, and consuming too much sugar is not good for your health long term.

Tea drinkers kick back as I explain the healthiest sweetener for hot tea.

Stevia is the healthiest sweetener for hot tea.

But, monk fruit extract is a close second.

It has the same nutrient qualities and similar sweetness to stevia.

But, they aren’t the best way to sweeten tea because raw honey has a large number of calories and blackstrap molasses has an unusual taste.

There is a range of different artificial sweeteners that are made chemically these include brands like Sweet n Low, Sunnett, and Sweet One which are usually made of acesulfame potassium.

There are also types of alternative sweeteners, called sugar alcohols.

Some are healthier than others, as explained by the medical professionals at Healthline.

But, generally, if you stick to stevia or monk fruit extract you can’t go wrong.

Regular sugar can either be made from sugar cane or sugar beets. In small quantities, regular sugar is perfectly fine.

But, using large amounts of sugar means it will be high in carbs and high in calories.

The upper limit for how much you should consume in a day is 3 tablespoons or 9 teaspoons.

For me, tea becomes far too sweet after about 3 teaspoons. But, some people can tolerate foods that are sickly sweet.

With these numbers in mind – 3 teaspoons per cup – as long as you don’t eat any other foods with sugar in them you can drink about 3 cups of sweetened tea a day.

Here’s how to make your own stevia from a stevia plant so you can get an idea about how stevia is made:

Coconut sugar is another good alternative that is made from all-natural sugars.

It’s made by trimming a coconut flower and collecting the nectar that comes out over about 3 hours.

This liquid is then processed exactly the same way as regular sugar.

As you may know, the syrup is dried until it turns into a crystalline structure like hardened toffee.

It’s then crushed to turn it into powder.

Coconut water is slightly sweet and can be added to various herbal teas.

It can taste a bit funny to add to black tea.

But, it is a matter of personal preference.

It’s definitely something you try to see if you like it because it contains an extremely low amount of sugar.

Monk fruit extract is also a really good alternative to sugar, and has zero calories.

Agave nectar is another good option.

Agave syrup is made from the agave plant which is thought to be native to South America.

Technically, fruit juice can be used to sweeten tea but can have a slightly citrus taste, depending on the fruit which you may not like.

Although pure maple syrup is a good sweetener for tea and other hot drinks, it’s also very high in calories.

The best sweeteners are low in carbs and low in calories.

This means stevia, is generally a better option if you’re trying to watch your calories.

Cane sugar is uniquely made using the juice of the sugar cane plant.

There is also what is called raw sugar which is brown in color and has large sugar granules.

Other forms of sugar such as brown sugar and raw sugar aren’t as processed as regular sugar.

That has been washed and dried many times to remove any impurities and give it its perfectly white color.

Why too much sugar or real sugar is bad to use in tea?

People who suffer from diabetes generally need to modify their diet and only consume small amounts of sugar if any.

The types of foods a person with this condition should eat should have a low glycemic index.

Stevia has a lower glycemic index than sugar and therefore is one of the better options.

Healthy sweeteners are low in carbs and low in calories.

The reason is that carbs and calories in sweeteners are usually found in really high amounts.

Therefore, they can easily cause you to consume more than the recommended daily intake of calories.

Generally, it won’t put you over the recommended daily intake of carbs.

But, if you’re on a keto diet or paleo type diet then stevia is your best choice.

Coffee is another very popular drink, and many people wonder if it’s OK to consume on the keto diet.

The short answer is yes, I summarized some of the best keto coffee recipes in this article about keto coffee.

But, high-fructose corn syrup is very similar in nutrient content to sugar and will have an effect on your blood glucose levels.

Too much sugar can lead to tooth decay.

Especially if you consume it a long time before it’s time to brush your teeth again at night.

This makes it a bit of a double-edged sword because if you consume sugar late at night it can make you irritable and make it difficult to sleep.

Health benefits of tea sweeteners that are low in calories/carbs

The health benefit of reducing your calorie intake is that it’s easier to put your body in a calorie deficit.

This will mean your body burns fat for energy, due to the fact you’re not getting enough calories from your food.

Natural sweeteners are very sweet and have unique hints of other flavors that taste quite different to regular sugar.

As you may know, sugar is made from two main plants, sugar beets, and sugar cane.

Beet sugar and cane sugar have a virtually identical flavors.

They can both be used to make white sugar or brown sugar.

These two types of sugar are made in different ways.

White sugar is refined a few more times to make the sugar more and more concentrated.

Tea is particularly high in amino acids and is good for your overall health.

But, drinking too much can have a negative effect.

I explained this in detail in this article about whether you can drink too much tea.

It explains how much tea is too much to drink a day.

The sweet taste that some natural sweeteners can provide can also be nice in coffee.

Such as cinnamon, and nutmeg.

Another common way to drink tea is iced tea, which is particularly well sweetened and with lemon.

In the Southern USA, it’s called sweet tea. But, how good does stevia taste in tea?

Does Stevia Taste Good in Tea? 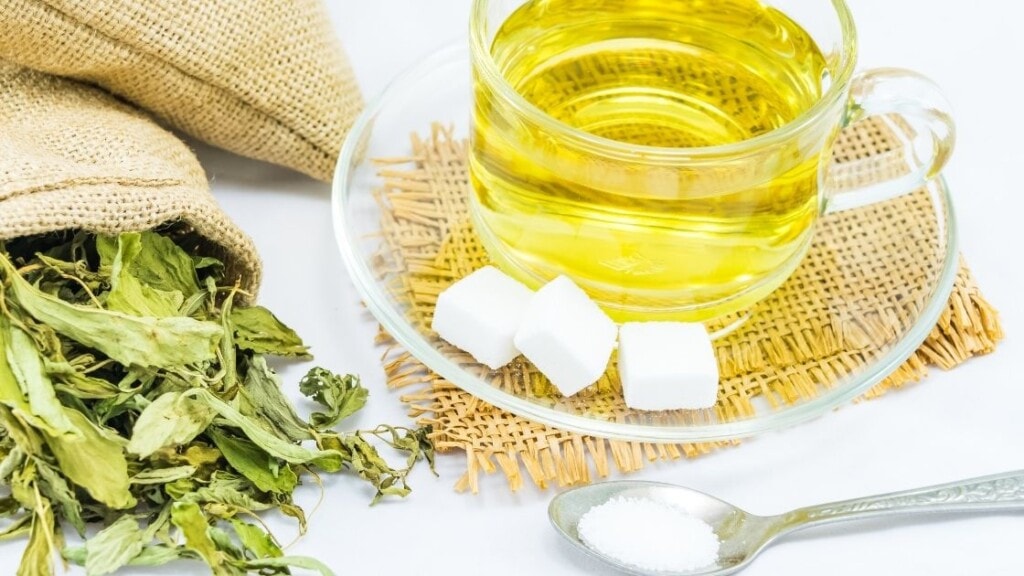 Stevia is not as available or as popular as regular table sugar.

This is because sugar has been around for many hundreds of years, whereas stevia sweeteners are relatively new.

If you’ve never tried stevia before you won’t be familiar with how it tastes, so here’s if stevia tastes good in tea.

As a general rule, stevia tastes good in tea.

Stevia is very similar to sugar in taste.

But, some people find it has a slightly bitter aftertaste.

In general, it will make a cup of tea a little to a lot sweeter based on how much you add.

Stevia comes in a granulated form similar to sugar but is also sold as a liquid syrup. Stevia is FAR sweeter than sugar.

A great way to add stevia is to add a tiny bit at a time, that way you don’t run the risk of oversweetening it.

Stevia is widely available online at some grocery stores.

How Much Stevia Should I Use in Tea? 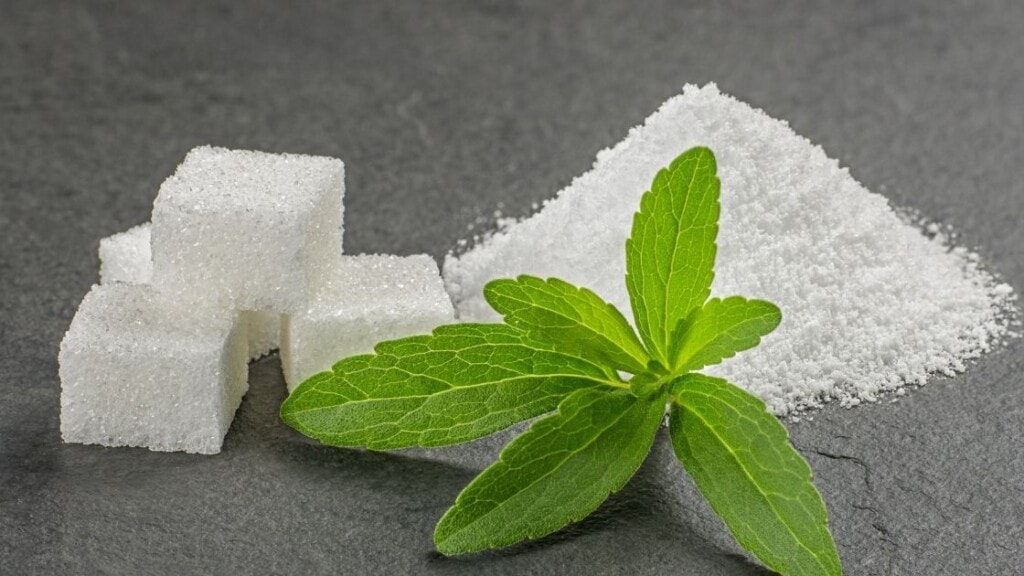 Stevia is much sweeter than sugar, and it can be difficult to know how much to add to a cup of tea or other hot drink.

So, here’s how much stevia you should use in tea.

In general you should use a tiny pinch of stevia.

Stevia comes in powdered form or as a liquid.

As a general rule, use about 2% of the sugar you would add to a cup of tea.

Start with a tiny pinch, and then add more to taste.

Black tea has a slightly bitter taste, and making it sweeter by using a sweetener such as stevia or sugar is a great option.

The same is true of other teas made from the same plant that black tea is made from such as green tea, Ceylon tea, English Breakfast, and oolong tea.

Adding milk can also balance out the bitter taste and make it much more delicious.

A little bit of sugar is fine but if you consume other foods such as chocolate or deserts you can easily go over the recommended daily intake of sugar.

This makes weight loss more difficult. And on the flip side can lead to weight gain.

The nutritional value of sugar is high in carbs and high in calories.

About 9 teaspoons of sugar are the maximum recommended amount.

But, this is provided you don’t consume any other foods with added sugar.

Other side effects of sugar are that it can also give you a sugar crash which makes you feel tired and irritable an hour or so later, and over a prolonged period can lead to heart disease and high blood pressure.

There is also a type of syrup called simple syrup, which is simply sugar dissolved in water and boiled down to make it more concentrated.

This syrup is high in sugar and virtually identical to using regular sugar and therefore has the same effect on raising your blood sugar levels.

Is Stevia Healthier Than Sugar? 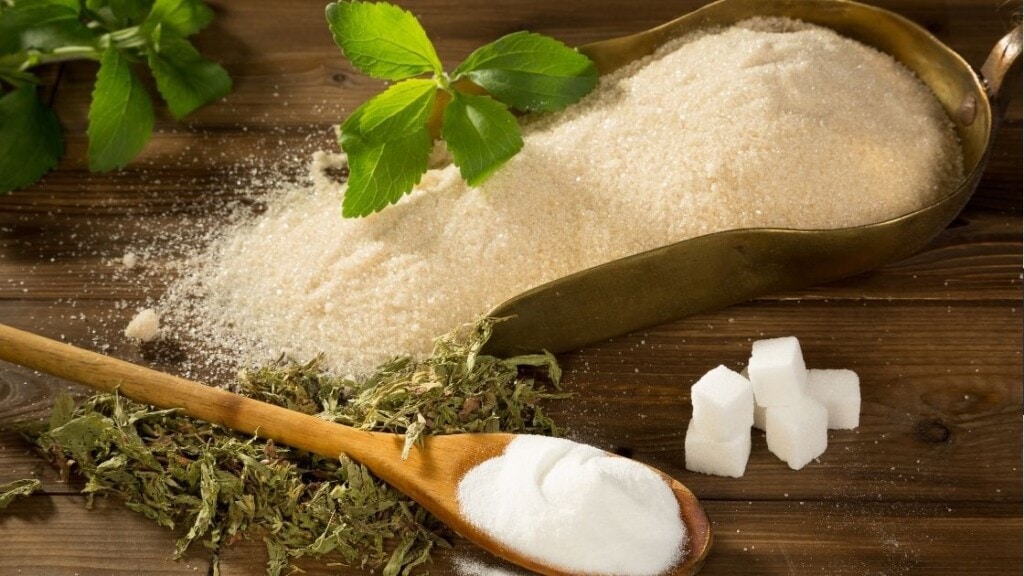 The good news is Stevia is a great way to reduce your sugar intake.

It is not as well known as sugar, but interestingly, is about 1000 times sweeter than sugar.

Various sweeteners are healthier than others, so here’s which is healthier, stevia or sugar.

Stevia is healthier than sugar.

But, stevia is a better option overall particularly if you’re wanting to lose weight.

Due to the fact that stevia has zero calories.

Stevia is a great sweetener to use and gives all the positive benefits of sugar without any of the drawbacks.

Regardless of whether it’s in liquid form stevia or granulated stevia the hot water in tea will dissolve it and spread it evenly through the tea.

It has far fewer calories than sugar, and other sweeteners such as honey, which makes it a really good choice.