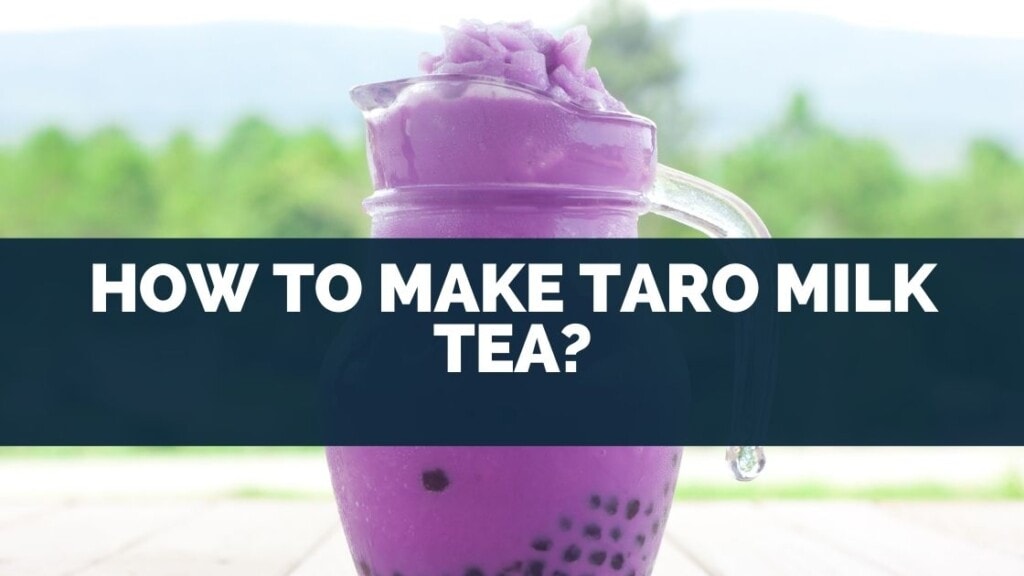 Today I will give you a step-by-step taro milk tea recipe for how to make this at home yourself, that tastes just like one you’d buy at a bubble tea shop.

They are boiled in water and left to soak for about 30 minutes.

You then mix them together with sugar or a sweet syrup and then pour them into the drink with a handful of ice cubes.

This is an easy recipe but is also how they make it at bubble tea shops.

It has a slightly nutty flavor, but can also be made with other liquids instead of water such as whole milk, or almond milk.

The purple/pink color comes from the taro milk powder which is one of the main ingredients.

What Is Taro Powder Made Of? 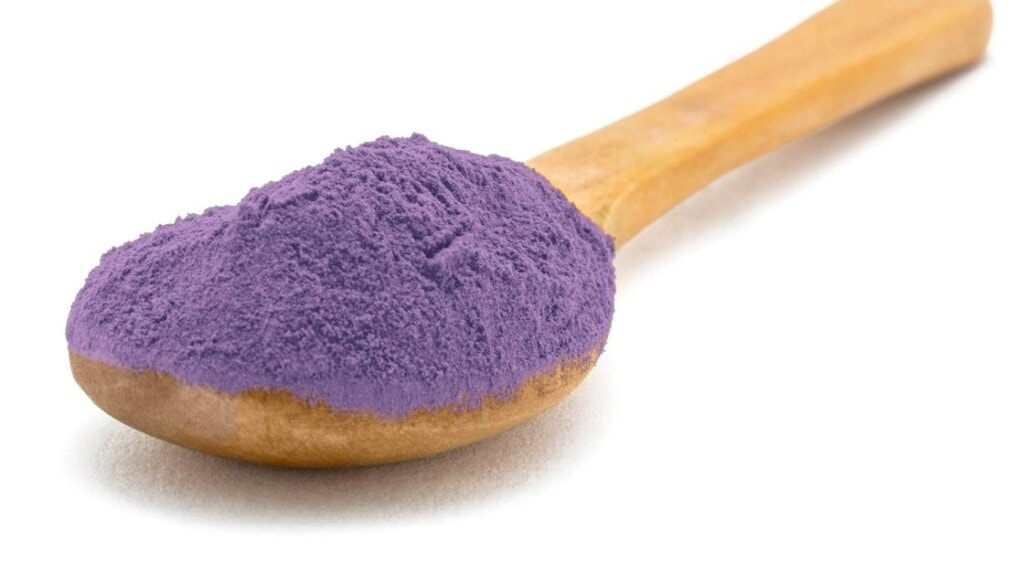 Taro milk tea powder is not the most common thing that you’d buy from a store.

Therefore, you may be wondering what it’s made of, and how healthy taro bubble tea is that you buy from a boba tea shop.

I looked at the ingredients in a popular brand of taro powder and here’s what’s in it.

Taro powder is made of non-dairy creamer, stabilizers, sugar, artificial taro flavor, and food coloring according to the nutrition label of Qbubble, a popular taro powder brand from Taiwan.

Taro powder has a shelf life of 2 years once opened.

There is no such thing as real taro milk tea, and people that like the taste of taro would find it difficult to find a resemblance between taro milk tea and the real taro root.

If you look at taro root powder you may assume that it’s the purple ground root of the actual taro plant.

But, if you look at the ingredients list of brands like QBubble, which have over 5000 reviews on Amazon, it’s a very simple recipe.

The individual ingredients do vary but contain a thickening agent, taro flavor, preservative, and sweeteners.

Some boba tea shops use water instead.

The amount of water used depends on how large the drink is.

Here’s a video of a lady who makes taro milk tea with tapioca balls from start to finish:

It’s possible to mix it all up really fast in a food processor.

But, at bubble tea shops, I’ve noticed they use an automated cup rotator.

The tea is added to water and sealed in the cup.

After that, it’s placed into a machine that turns it from side to side until the powder is fully mixed into the liquid.

It can be premade at room temperature and then placed into the fridge.

Alternatively, cold water that was previously kept in the fridge can be used.

If hot water is used to make it, it does speed up how long it takes for the taro milk tea powder to dissolve into the water.

But, then it needs to be cooled a lot afterward.

Therefore, this is not commonly how it’s made. Unlike conventional teas, like green tea or black tea.

Together with the mango milk tea it is one of my favorite drinks and my favorite bubble tea flavor.

Especially on a hot day, as when they make it they put in nearly a whole cup of ice.

Interestingly, though, it contains no caffeine, because it isn’t made with a teabag such as black tea.

Tea drinks in Asian countries that are made with real tea and served cold are also very common.

These are made by brewing tea in a pot of water and then adding milk and sugar to give it a sweet taste.

Either white sugar or brown sugar is used.

If you haven’t tried these, they are also very delicious.

The taste of delicious taro milk tea comes from the sweet flavors it contains combined with the creamy flavor of milk.

If they add milk, or you make it with milk at home it can take it to the next level.

This is because the taro milk tea powder is a bit creamy.

But, then when you add milk it makes it even creamier.

Taro milk tea is somewhat of a perfect drink because it is refreshing but also satisfies your hunger.

It can also be made in a few different ways.

To give it a creamier texture you can add your creamer of choice.

Coconut and taro go really well together so you can also use coconut milk instead of water.

Coconut milk can also be slightly sweet which can help to keep your blood sugar from spiking too high because you don’t need to add additional sugar or sweeteners.

Is Taro Milk Tea Supposed to Be Grainy? 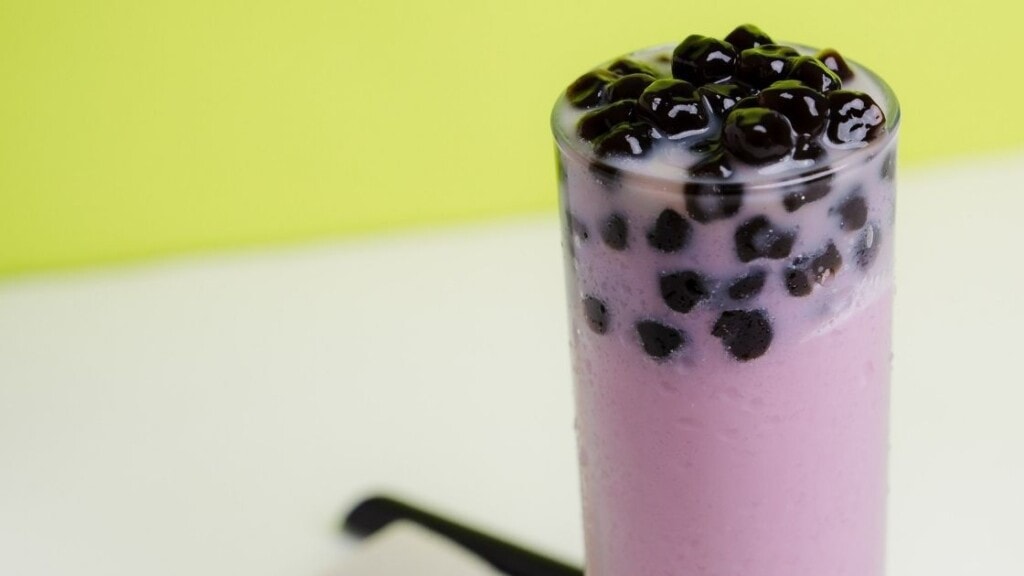 If you make it at home you may notice it has a grainy texture, and so you might be wondering if this is normal.

In general, here’s whether taro milk tea should be grainy or not.

As a general rule, taro milk tea is not supposed to be grainy.

Taro milk tea should have a liquid texture.

This can be fixed by thoroughly mixing it once it’s already made. If you got it from a shop you can ask them if this is normal for their bubble teas.

However, in my experience of drinking a tonne of bubble teas from bubble tea places, they are never grainy.

Why Is Taro Milk Tea Purple? 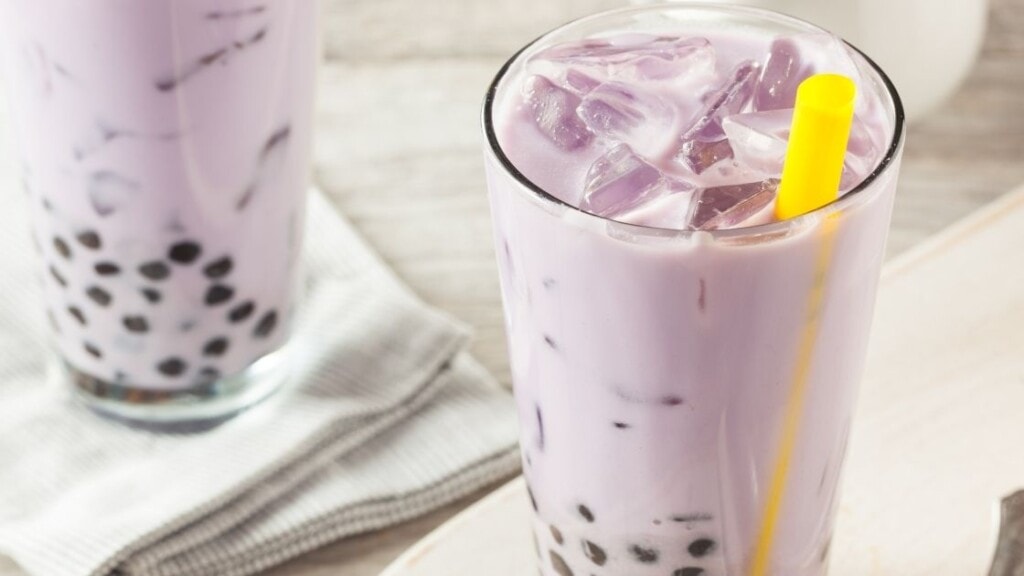 Although taro milk tea is made from taro milk powder, the companies that make it could make it any color they like.

So, here’s why taro milk tea is purple.

Taro milk tea is purple to make it the same color as the taro vegetable.

Taro milk tea is named after the taro root vegetable that grows in tropical countries.

There are a few different varieties of taro, some are more white than purple.

But, common taro is light purple in color.

Which is reminiscent of the taro vegetable that has the scientific name colocasia esculenta.

Fresh taro root is a starchy root vegetable, and is used similarly to purple sweet potatoes.

However, it’s not sweet at all.

Characteristics of the taro vegetable – where and hot it grows

The flavor of taro root has a unique flavor and it’s also used to make a taro ice cream.

This root plant grows best in tropical countries such as those found in South East Asia.

It is also very popular in the Polynesian Islands of Samoa, and Tonga.

Taro plants grow to about knee height and take about 6 months to go from a small seedling to where the taro can be harvested.

They have a solid brown exterior that is tough.

This is removed to expose the light purple flesh underneath.

It can have purple flecks and streaks but in general is purple through and through.

And has the exact same color as taro milk tea.

Taro is found in Asian countries, however, bubble tea houses, also called boba shops in countries like the USA are typically Chinese-owned and operated.

At least I noticed A LOT of Chinese people would be there especially on the weekends, drink bubble tea, and order skewers of meat.

Where taro bubble milk tea is one of the classic recipes.

I also found another taro drink that is taro jelly, but there are also taro smoothies.

It’s the same as taro bubble milk tea, but instead of the pearls it has chunks of jelly.

It is the only purple bubble tea.

However, it’s not a traditional tea.

Similar, to say a jasmine tea or a green tea made from green tea leaves.

Instead it can be made with fresh milk.

Nutrients in taro (the vegetables)

There are varieties of taro that are particularly high in vitamin C, vitamin B6, and other nutrients.

But, common taro is not particularly high in vitamin C, and contains only 5% of the recommended daily intake (RDI) per 3.4 oz (100g).

However, it’s very high in fiber which makes it great for your digestive system.