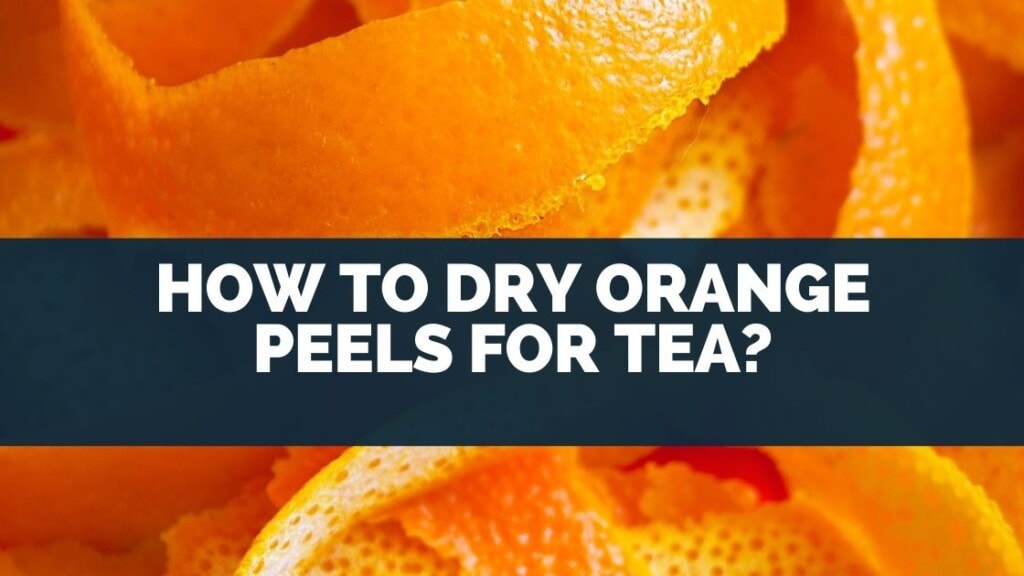 When using oranges it’s common to have leftover orange peels. Interestingly, it can be made into herbal tea.

When boiled it has a nice tangy orange flavor, today I will explain how to dry orange peels for tea.

Don’t remove any of the plit, which is the white thick part of the peel.

Break it into even-sized pieces and leave it on a paper towel for 8 days.

The simplest orange peel tea recipe is to add 3 or 4 dried orange peels to a cup of boiling water.

Or, add them to a cup of hot water.

Orange peels can also be used in a range of different ways.

Below, I will explain what else orange peels can be used for, the health benefits of orange peel tea and if there is anything you need to be aware of about drinking orange peel tea.

What Is Dried Orange Peel Tea Good For? 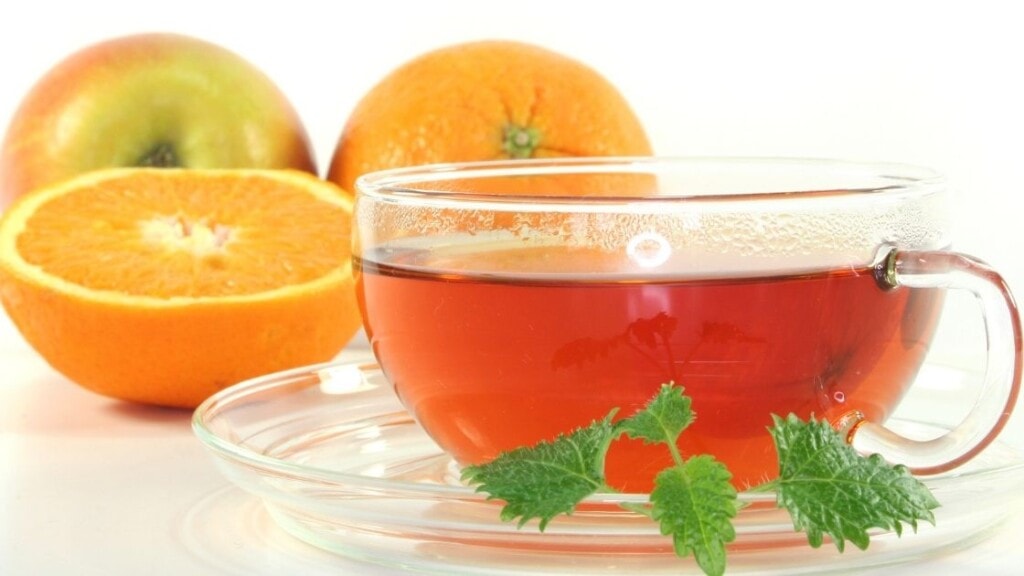 The dried peels of orange peel don’t look fresh and are particularly high in nutrients.

But, as far as herbal teas go they rank up there, and it also has a nice orange flavor.

I looked into the nutrients in the dried orange peel to see what it’s good for, and here’s a summary.

Overall, dried orange peel tea is good for your immune system, metabolism, the repair, and growth of your bodily tissues, iron absorption, wound healing, and helps the body to turn carbs into energy.

This is because they are high in zinc, vitamin C, and thiamin (vitamin B1).

All of which are water-soluble and will come out into the boiling water of orange tea.

Here’s a table that shows the nutrients in orange peel, and what percent of the recommended daily intake they contain.

Orange peel also contains many other nutrients shown in the table below.

But, because the other vitamins and minerals are not water-soluble, they won’t be present in orange peel tea.

Other ways that dried orange peel can be used

There are also some other uses of orange peel tea such as:

Dried citrus peel can also be used in a range of different ways other than making orange peel tea.

It can be added to water and put into an ice cube tray, to create decorative ice cubes.

A few orange peel recipes include baked goods such as muffins and cakes.

But, it can also be added to meat marinades, or placed on top or in meat as it’s cooking.

It can be made into a natural detergent by mixing it in a spray bottle with your own homemade liquid soap.

The reason is the acid in the orange peel turns the milk rancid. Interestingly this is how cheese is made.

But, a stronger type of acid is used to separate milk into curds and whey.

It can take quite a long time to dry the orange peels.

But, once you’ve made them keep them in an airtight container.

Leaving dried orange peels out at room temperature should be avoided because the final product is susceptible to mold.

A handheld grater that makes citrus rind can also be used to create orange peel tea.

Citrus rind itself can be added to boiling water to make an orange peel tea.

Orange peels can also be dried in an oven, but a low oven heat should be used so that the orange peels don’t burn.

Simply place the fresh orange peels on a baking sheet or parchment paper that is on top of a sheet pan.

Then leave it in the oven until they become crispy.

Depending on the heat this can take about an hour.

Once orange can make about 5 cups of orange peel tea, depending on how strong you like it.

You can boil water, and then pour it over a teaspoon of dried orange peel placed in the bottom of a cup.

A tablespoon of orange peel or two can be placed into a cup of water that is very hot/boiling and left to steep for a few minutes.

Or, you can place it into simmering water on a stove set to the lowest temperature and let it simmer for around 5 minutes or less.

Remove the white stuff only use the very outer layer

The technical name is pith, so I should say known as white pith.

A great way to do that is by using a vegetable peeler.

A zester can also be used to remove the very outer layer – called the orange zest, or citrus zest.

As you do so only remove a single layer. A serrated knife can also be used but is generally trickier and takes more time.

When peeling it the top of the fruit and the bottom are generally the most difficult parts.

You can also soak cinnamon sticks in the tea and then remove them to add another flavor dimension.

After the first time you make it you will get a feel for how much dried orange peel to use.

Navel oranges are the most common in the USA, but orange peel tea can be made out of any type of oranges.

Tangerine skin is generally a much darker shade of orange and provides an interesting color to orange peel tea.

It’s also a good idea to make your own blends of citrus tea by mixing together the dried peel of various different citrus fruits. Vitamin C is known to be very good for the immune system.

The dried citrus rind of orange, lemon, or lime can be ground into very small pieces using a spice grinder, or using a pestle and mortar.

Or, they can be put into a food processor to turn them into a very fine powder.

Lemon peel, and lime peel are particularly sour, which can go well mixed with orange peel.

You don’t need any special equipment but a dehydrator can really speed up the drying process if you happen to have one, or are thinking about getting one.

Store them for future use in a cool, dry, dark place to stop mold from growing on them, and to stop sunlight from speeding up the aging process.

Hot tea can also be made into iced tea by letting it cool and then adding ice cubes, or storing it in the fridge.

Or, it can be added to homemade ice cream.

Chocolate and orange tend to go very well together.

But, it can also go really well with a range of different flavors such as berries and fruit flavors. 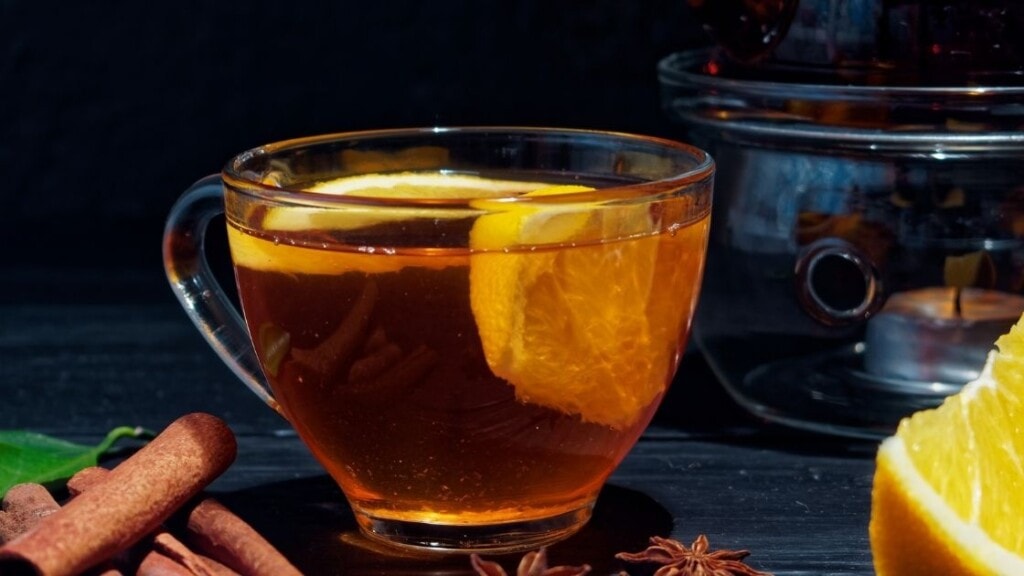 Fresh peels of citrus fruits such as oranges are typically discarded..

But, citrus peels contain a lot of nutrients and some nutrients are found in ever higher amounts in the peel.

It is perfectly fine to drink orange peel tea everyday.

In high amounts, these can have negative effects.

But, the amount that comes out into orange peel tea is extremely small.

Orange peel extract is also a product made from orange peels and is an essential oil.

Essential oils are used in aromatherapy, but also in foods and drinks.

There are no known side effects to drinking orange peel tea everyday.

The peel of the orange is particularly high in vitamin C relative to consuming the flesh of an orange, or orange juice.

Organic oranges can also be a good option because you don’t need to worry about potentially harsh chemicals used on the skin to kill bugs and molds.

Orange pekoe tea is a bit unusual because it’s not made from orange at all.

I explained what it is, and what it’s good for in this article about what is orange pekoe tea.

What Are the Side Effects of Drinking Orange Peel Tea? 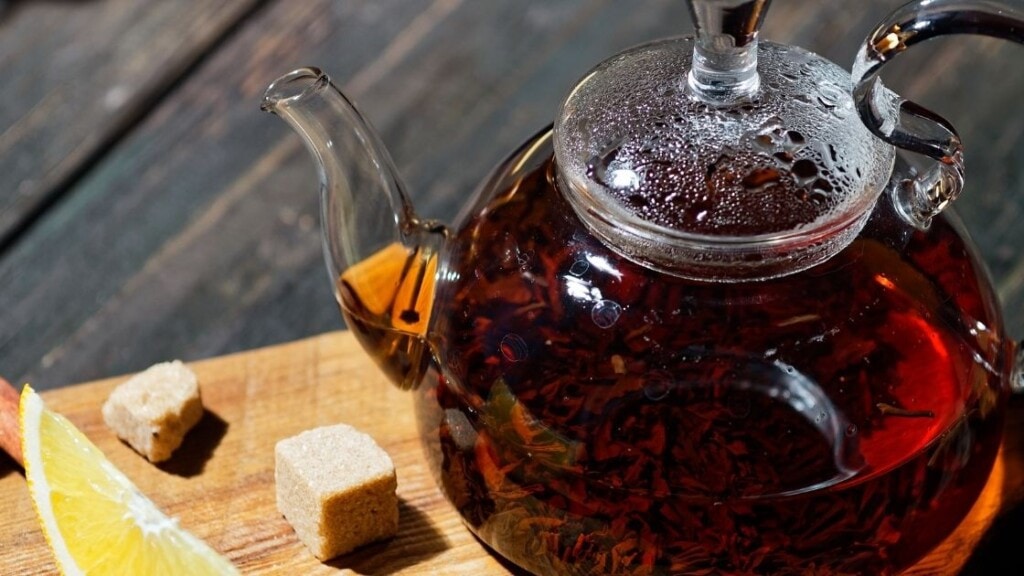 The peel of an orange is much more bitter than the flesh.

Orange slices are also typically discarded so are there any side effects to drinking orange peel tea?

Overall, there are no known side effects of drinking orange peel tea.

Orange peel contains a very high amount of vitamin C, which can have negative effects on your digestion and bowel health.

But, the amount that comes out into orange peel tea is about 10% of that found in whole orange peel.

So, the good news is the next time you drink orange peel tea, you won’t need to worry about it doing you any harm.

The reason is, provided you don’t add sugar it has virtually zero calories.