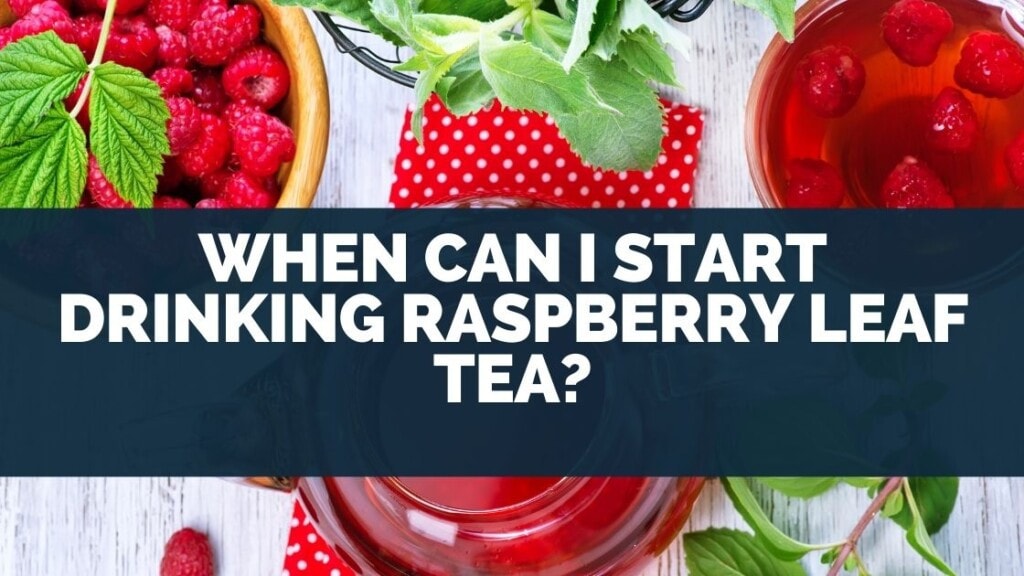 Herbal teas are generally good for you and provide an interesting twist on drinking plain water.

Raspberry leaf tea is often thought of as being good for pregnant women but only after a certain time during pregnancy.

So, I looked into many different studies of the effects of raspberry leaf tea on pregnancy, as well as its other benefits, and here’s what I found.

As a general rule, for pregnancy you can start drinking raspberry leaf tea at any stage during pregnancy.

There is a small amount of evidence to suggest that it’s best to start drinking after 32 weeks after pregnancy.

But, more research is needed to make this a strict guideline.

However, professional midwives don’t recommend using any sort of supplements during the first or second trimester of pregnancy.

Below, I will explain the benefits of Raspberry leaf tea, if you can drink it every day if it works immediately, and how much of it you should drink every day. 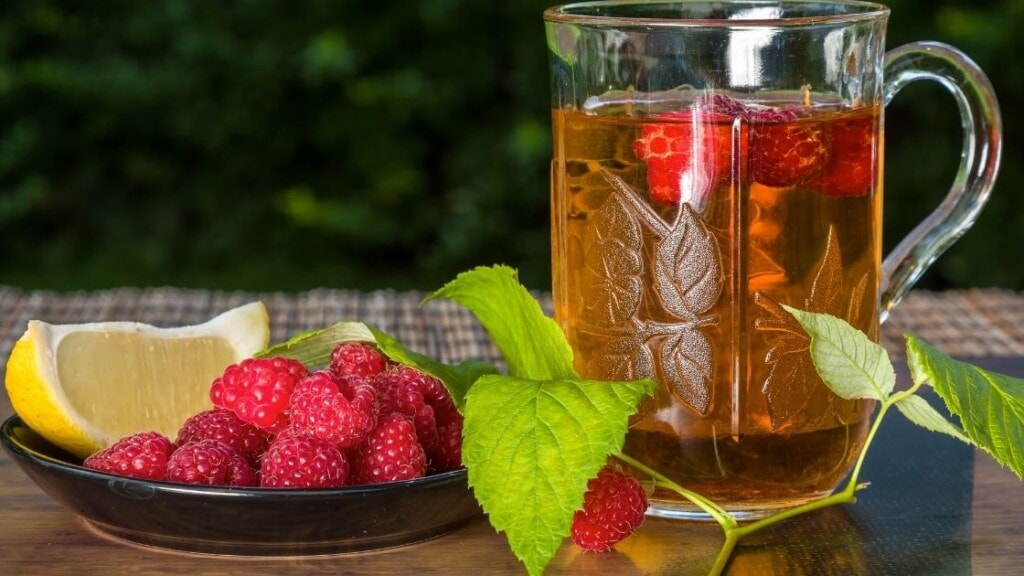 Herbal teas in general contain the nutrients found in what the tea is made from which are beneficial for your health.

But, here’s the specific benefits of drinking Raspberry leaf tea.

Raspberry leaf tea is known to decrease forceps deliveries of children by 10%, and decrease the length of the second stage of labor by about 10 minutes.

The other benefits are well-being benefits such as being a good source of hydration and calming your mood.

But, the clinical trials performed were for raspberry tea being taken in tablet form, and not the tea itself. Some other medical professionals have claimed that raspberry fruit tea helps pregnant women with:

And have therefore dubbed it as a pregnancy tea.

They have also said that Raspberry leaf tea contains nutrients such as vitamins A, vitamin E, and vitamin C.

All of which are good for high blood pressure, and reducing free radicals.

However, it appears that these benefits are unsupported by A LOT of evidence.

And the findings were only from one case study.

The study used a placebo group and a treatment group, and showed some interesting results.

But, here’s a quote from a study of over 13 different studies that looked at the efficacy of raspberry leaf tea.

“Many women use raspberry leaf in pregnancy to facilitate labor and birth.

These studies were either human studies or combined human and animal studies.

The studies used a control group to identify any scientific evidence for the potential benefits of raspberry leaf tea, and here’s a quote summarizing what they found.

There are different parts of pregnancy and they are broken down in different time frames such as the first trimester, and third trimester.

An interesting finding was that raspberry leaf has no effect on how many weeks of pregnancy women had.

In another way of saying it didn’t affect the average of 36 weeks gestation – when the due date was, or how common it was to have an early pregnancy.

But, it did cause a 10% lower rate of forceps deliveries, which in my opinion also relates to another common method for delivery complications known as a vacuum birth.

This is implemented when there is difficulty in delivering a baby in a canal birth.

As you may know there are two main types of births, canal births, and a caesarean section.

A caesarean section is required under some circumstances.

Another complication of pregnancy can be gestational diabetes.

If you are suffering from gestational diabetes then it’s generally not recommended to add sweeteners to raspberry leaf tea.

But, this is something you should discuss with your healthcare provider.

It was also shown to be a softening agent for stool.

This effect is beneficial for constipation.

Another common treatment for constipation is castor oil.

But, medical professionals say not to take castor oil while you’re pregnant because it can induce labor.

So, raspberry leaf tea is a good alternative constipation remedy.

The beneficial nutrients in raspberry leaf tea are known to be good at reducing free radicals, which have been linked to cancer formation.

But, only when used as a substitute for drinks that are normally high in calories. 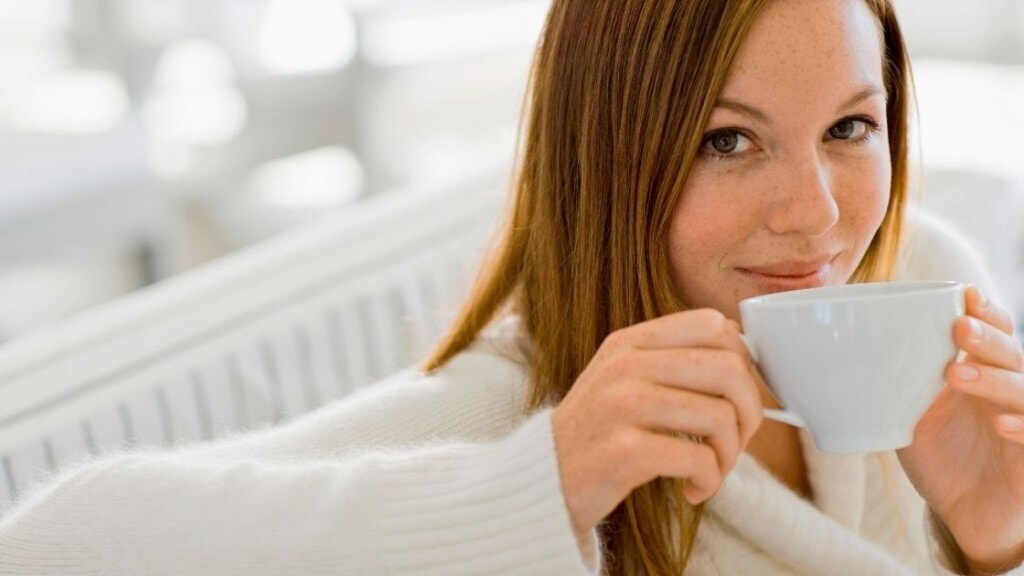 Raspberry leaf tea has the scientific name (rubus idaeus) and is known to be good for reducing the negative effects and how difficult pregnancy is.

Some raspberry leaf teas are very delicious and you may want to drink a cup every day.

I looked into whether it’s ok to do so and here’s what I found.

But, there are limitations if you’re taking raspberry leaf extract in capsule form.

According to studies aim to consume around 2 x 1.2 g raspberry leaf capsules per day.

Herbal medicines such as those made from leaves of the raspberry plant can also be sold in capsule form.

The tea made from raspberry leaves has been used as a uterine tonic in the past.

And therefore it has also been made into capsule form by brands such as Nature’s Way, and are generally available from health food stores.

There is currently no data about the beneficial effects of the tea itself.

However, it’s assumed it is beneficial due to the raspberry leaf herb’s historic use.

Another common tea is black tea.

Black tea is different from raspberry leaf tea because it contains caffeine.

A cup of black tea contains about half the caffeine that coffee has.

I explained this in more detail in this article about one of the highest grades of black tea – orange pekoe tea.

How Much Raspberry Leaf Tea Should I Drink Daily? 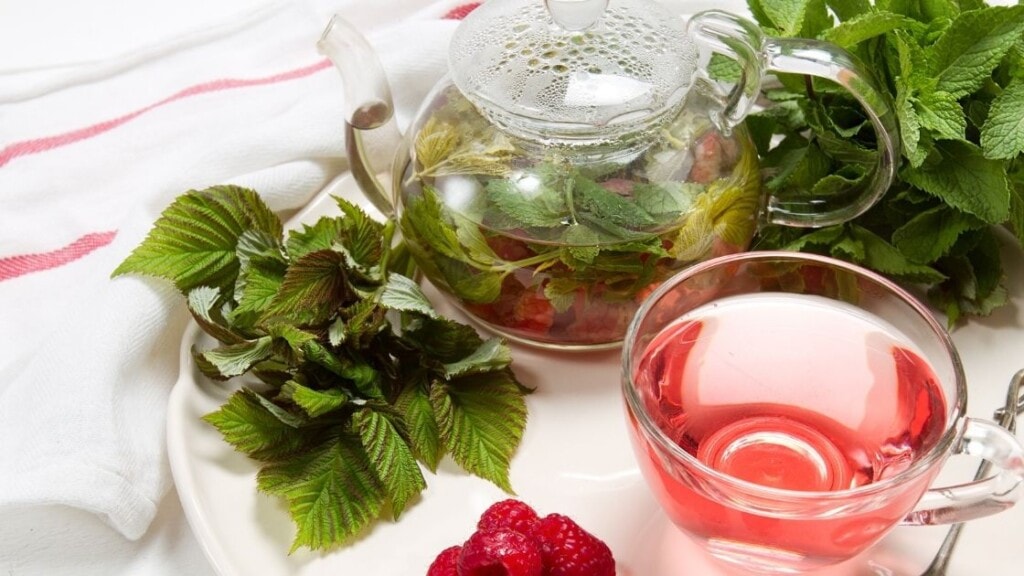 But, some foods and drinks are very nutrient-dense, and consuming a lot of them, or consuming them daily can sometimes not be good.

Here’s a summary of whether it’s OK to drink raspberry leaf tea every day.

Overall, consume no more than 3 cups of raspberry leaf tea per day.

There are no identified side effects to drinking a lot of raspberry leaf tea.

But, it’s best to not over consume it until more research comes out.

The adverse effects of consuming too much of certain nutrients is diarrhea, vomiting, nausea, and headaches.

But, in general if you drink a lot of the tea it won’t affect you negatively at all.

It’s important to note that this is only true of herbal teas, such as raspberry leaf tea.

And you shouldn’t consume more than 2 to 3 cups of black tea per day.

The reason is it can give you diarrhea.

Here’s a really good video from a midwife where she answers some common questions about drinking raspberry leaf tea during pregnancy. 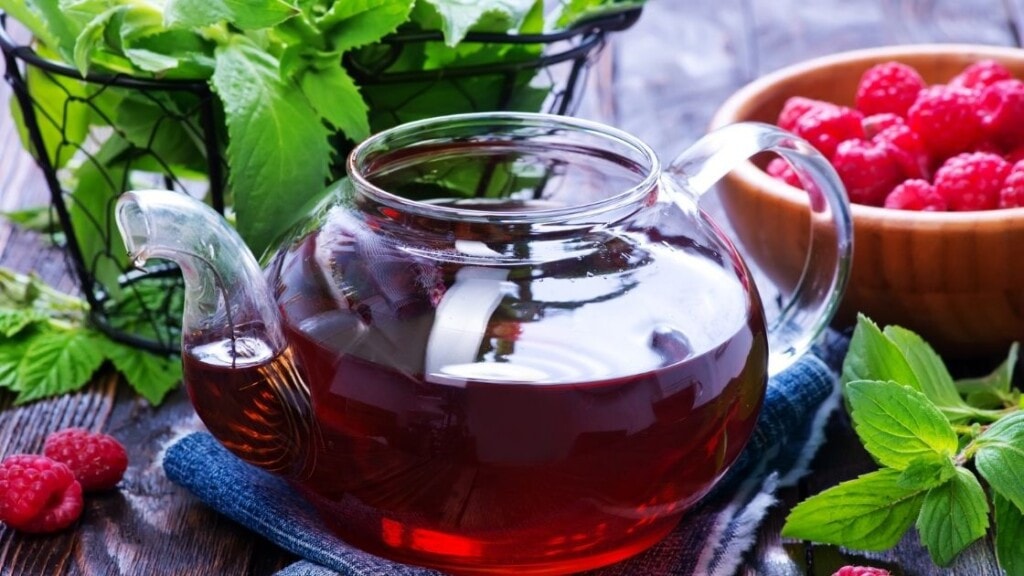 Drinking a cup of red raspberry leaf tea has a calming effect.

But, many herbal teas can contain beneficial nutrients which provide positive effects on the body.

These can take some time to have an effect whereas, others can work immediately, so here’s how long it takes for the effects of raspberry leaf tea to work.

As a general rule, raspberry leaf tea does not work immediately.

To get the beneficial effects for pregnancy and childbirth, studies have found that the nutrients in raspberry leaf tea need to be consumed consistently.

It should also begin to be consumed 32 weeks after pregnancy.

It can be a good idea to start drinking raspberry leaf tea earlier to give more than enough time for it to be absorbed into your body.

But, it isn’t required to get the benefits of raspberry leaf tea for pregnancy.

Another interesting and delicious herbal tea, that can be made as a loose leaf tea or bought as tea bags is orange peel tea.

I explained in this article how to make orange peel yourself .

It also covers whether it’s good for you and if you can drink it frequently.

Interestingly, dried orange peel can also be used in a range of recipes.