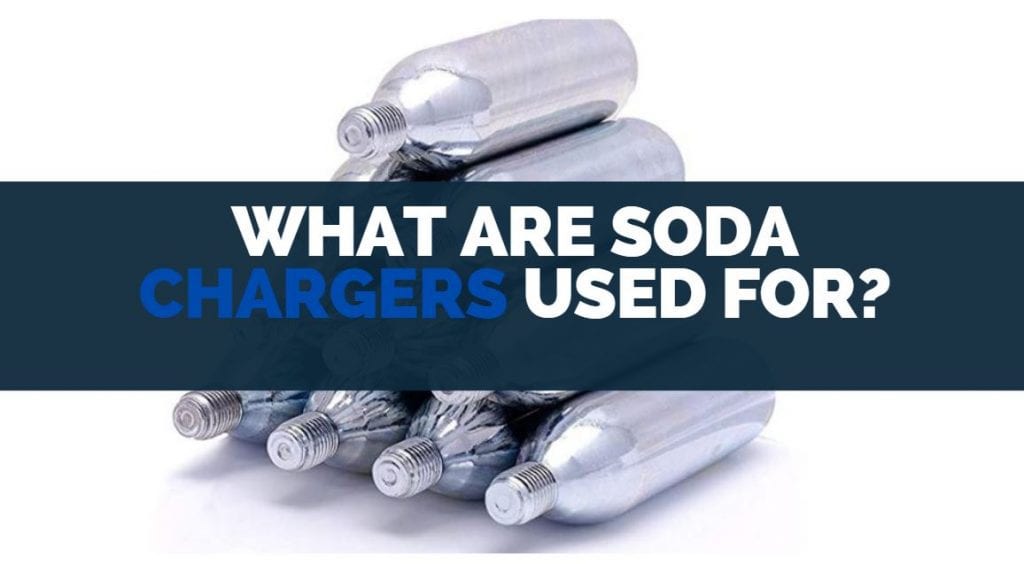 Food preparation and convenience have long been a time-consuming task that has plagued both the commercial industry and households for decades.

But, with modern times comes modern advancements; including soda chargers.

Hundreds of years of accumulated science have led directly to the creation of simple soda chargers – and they’re used everywhere.

So what Are Soda Chargers Used For?

Soda chargers are simply used to add carbonation into water or other beverages. They’re made of steel and filled with pure carbon dioxide (co2).

You’ll find them typically used within the commercial food industry as well as households who love fizzy drinks.

They’ve become incredibly popular in modern times because of how easy and convenient they are to use.

To use one, all you need is a soda siphon, otherwise known as a seltzer bottle, and some liquid that you’d like to carbonate.

They work by releasing a lot of co2 all at once within a soda siphon filled with water and carbonating the drink thoroughly.

Soda chargers are also relatively inexpensive when compared to other methods of carbonating water, making them a popular alternative to soda machines such as Sodastream or Aarke carbonators.

They take up less space, cost less to purchase, and require much less maintenance.

What’s not to love?

The process of using a soda charger is relatively simple.

To use one, you’ll need the following items:

Once you have all the required ingredients, go ahead and place the soda charger within the seltzer bottle.

After it’s placed within the fluid you’d like to carbonate, release the gas from the soda charger.

To get an even spread of carbonation throughout your drink, make sure you shake the bottle a few times.

Remember to shake gently if you’re planning on enjoying your fizzy drink soon. If you shake it too hard, you may be in for a bit of a surprise when you open the bottle!

What is a Cream Charger Used For?

Beyond the substance that they’re filled with, cream chargers are used for entirely different things within the food prep world.

Most commonly, they’re used with whipped cream dispensers or cream whippers to help produce a large amount of foam or whipped cream in an extremely small amount of time. This can make a job that used to take several hours to be done within several minutes!

How to Use a Cream Charger

To use the cream charger, begin by putting the charger within a sleeve of the carton within the whipped cream dispenser.

Do all the necessary steps to secure it in place.

Once it’s been secured in place, all you’ll have to do is press in the lever on the whipped cream dispenser.

This will release the compressed nitrous oxide into the cream. Don’t be alarmed if you hear any hissing sounds or if the nitrous oxide is releasing quickly. It’s made to be released at extremely high pressure to allow the cream to absorb it quickly.

After the cream has absorbed the nitrous oxide, begin to shake the dispenser to all the nitrous to thoroughly move through the cream. Then, release the lever.

No, soda chargers are not nangs.

Nangs is a slang term for nitrous oxide. Commonly referred to as laughing gas.  Using nitrous oxide from a device in such a way is dangerous and illegal – don’t do it..

While soda chargers aren’t nangs, cream chargers may often be referred to as nangs.

You won’t find anyone trying to inhale a soda charger.

What is in a Soda Charger?

Soda chargers are filled with carbon dioxide or co2.

This is a clear contrast between cream chargers, which are commonly mistaken as soda chargers.

Beyond co2, there is nothing else found within a soda charger.

The Difference Between Carbon Dioxide and Nitrogen Oxide

Because of similar-sounding names and being found within similar products, carbon dioxide, and nitrogen oxide are frequently confused for one another.
However, they’re vastly different in their chemical compounds and what they’re used for.

Both nitrogen oxide and carbon dioxide do come in similar canisters, so be sure you know which is which. If you don’t, you may end up with odd-tasting whipped cream and soda! Consider using a label to help yourself tell them apart.

Nitrogen oxide is the least expensive out of all the available gases for commercial use. It’s also frequently referred to as laughing gas.

When used correctly, nitrous oxide is tasteless and is hard to detect when you’re in its presence. It’s also not toxic or harmful to the body if released in the right way.

This is how it’s able to be used in consumable products such as whipped cream.

If used incorrectly, it slows down the efficiency of the brain and may cause deficiencies in various vitamins that are important to the health of your body. It has serious negative health effects on both your body and mind and should never be used illicitly.

Misuses of nitrogen oxide have become such a problem in some areas of the country that some companies will only sell nitrous oxide with a cream charger.

In the past, they were sold in singular cartridges, but now, many companies will avoid doing so to prevent abuse from occurring.

Carbon dioxide is much different than nitrogen oxide in that it won’t produce any of the same effects.
Because of this, there’s much less control and regulation over how carbon dioxide can be sold.

It’s also a bit more expensive than nitrous oxide but is well worth the price because of the sheer amount of time you can save when using it.

Another key difference is that you can taste carbon dioxide. This is most noticeable when you’re drinking fizzy water. It’s a bit bitter and may cause a slightly unpleasant, or pleasant taste (depending on the person).

Carbon dioxide is also known to harm the environment because of the chemicals it releases into the air.

However, most of the damage done by carbon dioxide is from major commercial companies. Using carbon dioxide within your small business or home won’t be even putting a dent in the grand scheme of things.

How Long do Soda Chargers Last?

Soda chargers are known for being a one-time use item.
Once you’ve put a soda charger into your drink and released all the carbon dioxide, you won’t be able to use it again.

If you’d like to use soda chargers for long term use, they’re normally sold it large packs of 10 or more.

While a singular soda charger doesn’t last long, buying a pack will help you keep using them in the long term.

If using soda chargers seem too inconvenient, there are alternatives.

Soda machines or carbonator machines, such as Sodastream or Aarke will allow you constantly carbonate water for delicious fizzy drinks whenever you want.

Soda chargers are great for making a time-consuming job takes only a few minutes.

However, if you’re using them for personal use, they can become quite costly over a short amount of time.

If you’re wanting to get the most bang for your buck without having to break the bank on dozens of soda chargers for your fizzy drink needs, consider purchasing a carbonator machine.

Both Aarke and Sodastream provide machines that are built to add carbonation to your drinks.

The upfront cost of one of these is much higher than a soda charger, but you’ll save a ton of money in the long term.

They work by using canisters of co2 and pushing them into bottles of water that screw onto the machine.

They’re both great options if you want to save some money while still getting to enjoy your delicious fizzy drinks.