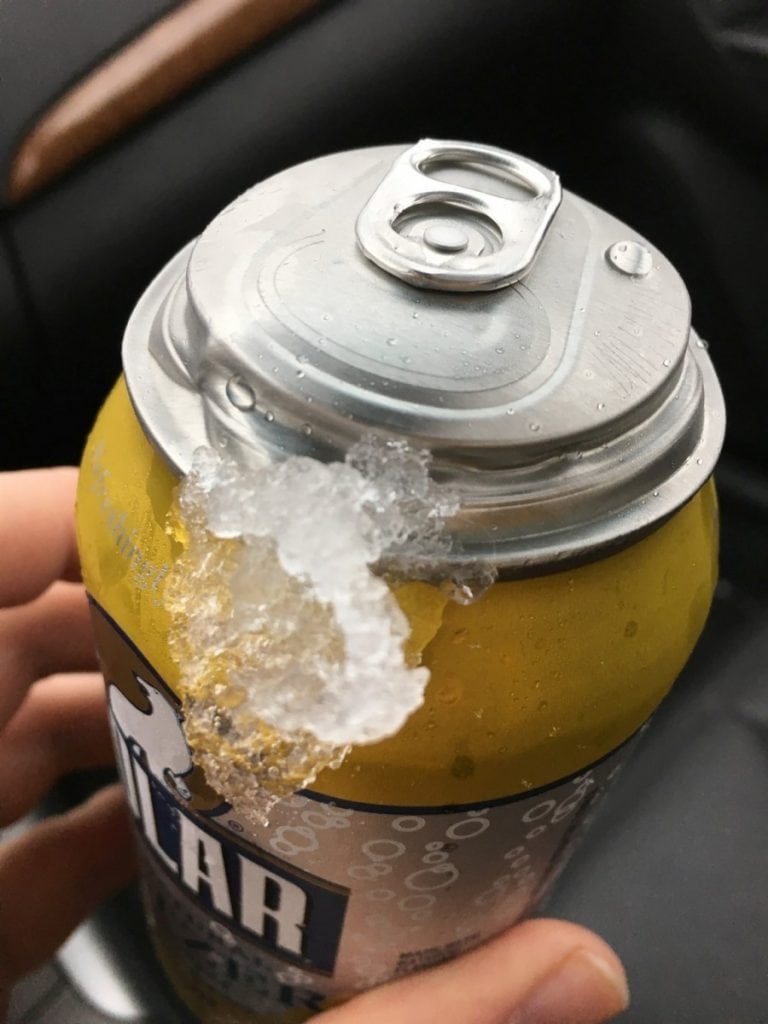 On a hot summer day, there’s often nothing better than ice-cold soda pop. But if you forgot to throw your latest batch in the fridge and need to cool it down in a hurry, you might consider putting cans of soda in your freezer.

After all, your freezer is colder than your refrigerator, and cooling it this way means you don’t have to water the soda bottle or fizzy drink down with a chunk of ice or ice cube.

So what happens if you leave soda in the freezer?

If you leave your drink in the freeze, there are two possible outcomes: you might have a frozen soda container if you are lucky. But you’ll have frozen exploded cans of soda decorating your icebox in many cases.

A can of soda that has just exploded will sound a loud “pop”  and leave the interior of the icebox coated in snowy soda remnants, along with shards of the aluminum can or plastic bottle. 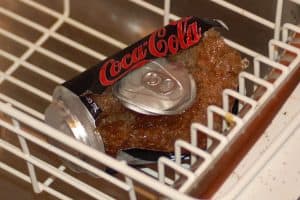 This occurs due to the unique chemical properties of water mixing explosively with the naturally expansive properties of carbon dioxide gas.

Other liquids can be safely stored in your freezer to become chilled and frozen into a solid state, but not regular soda. Both water and carbon dioxide have a tendency to push against their containers under the right circumstances.

Even if the can of frozen soda hasn’t exploded, it’s not a very safe thing to handle since putting pressure on the container could trigger the same chain reaction described above.

Overall, putting soda in the freezer isn’t a smart idea even if you’re desperate for a Supercooled Soda drink.

While it’s tempting to use your freezer to chill a can of soda on a hot day, other methods can accomplish the same goal without as much risk to your icebox or personal safety.

Expansion of Water In Your Soda Can

To fully understand this process, you must understand how water expands when the ambient temperature changes with your soda.

This is because higher temperatures cause liquids to become more gaseous as a result of more energy in the environment surrounding the liquid.

The reverse is true for cold temperatures; liquid molecules slow down and thus become more solid. In fact, when liquids freeze, the temperature is so cold that their molecules don’t move around as much.

Water follows this general trend, but only up to a certain point. At 4°C, water stops becoming denser as it cools down and instead starts to expand as the temperature continues to decrease.

This quirk of physics is what makes ice take up more surface area when frozen than the same amount of liquid water, along with some air molecules being trapped in the latticework of a given piece of ice.

As a soda drinker, you know your freezer reaches below 4°C. It reaches at least 0°C to achieve the water’s freezing point and get the supercooled soda. Any fluids inside your freezer will expand as they reach the final stages of transitioning to a solid state of matter.

Why Does Soda Explode in the Freezer?

So, how does this affect soda cans or bottles, and why does it cause an explosion?

Despite all of the tasty ingredients that make up a can of Coca-Cola or Pepsi, both beverages and all other types of soda are primarily water and carbon dioxide. In fact, water is the single ingredient that makes up the majority of the matter in a given can of soda.

This means that every can of soda is basically a ticking time bomb if you stick it into your freezer. That’s 16 or so ounces of liquid will chill until it reaches 4°C, then start to expand.

However, water alone would not cause an explosive effect. The presence of carbon dioxide is the secret ingredient.

You see, as the water expands, it also puts pressure on the carbon dioxide gas to escape its confinement. Unlike regular water, carbon dioxide is relatively explosive if you unleash it quickly through a small opening.

Imagine opening a can of soda; the immediate hiss you hear is the carbon dioxide escaping through the top rapidly.

When a soda explodes, the water and CO2 have put so much pressure on the can that the structure can’t withstand it any longer.

The aluminum can of a normal soda is strong enough to withstand normal pressure changes and hold the carbonation pressure from the carbon dioxide gas.

But it’s not built to handle the type of pressure that comes with an entire can of liquid trying to expand. As you might imagine, the expanding water has nowhere to go, increasing the stress on the aluminum can, particularly its weaker points like the tab you use to open the soda to drink. 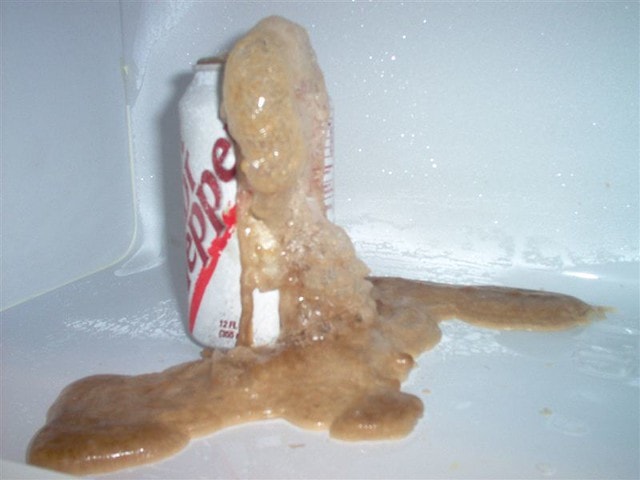 These weak points only become more stressed as the water and CO2 continue to expand and reach 0°C.

This is not a sudden process; that’s why some soda cans will make it all the way to the freezing point and become frozen solid without exploding.

In those cases, the expansion effect that happens slowly enough in the aluminum can was strong enough to withstand the change.

But in most cases, the slight pressure buildup will eventually reach a breaking point and cause the supercooled soda can’s top to blast off.

In some circumstances, the middle of the can may be the weakest point, so this spot will explode outward, sending shards of ice and aluminum everywhere. It’s quite a mess.

It’s simple physics; the water and gas inside the can expand, and the aluminum can isn’t strong enough to keep it contained.

Therefore, using a freezer to cool down a soda can is risky.

Note that this entire process is no longer relevant if the can of soda or fizzy drink is already opened.

Putting a cup of uncovered soda into the freezer is perfectly fine because there will be enough space for the expanding liquid to occupy without putting a strain on the container.

How Long Can a Can Of Soda Be In the Freezer Before It Explodes?

As mentioned above, you can always use the freezer to cool soda if it’s in another container beside the original sealed can or bottle.

Of course, a cup filled to the brim with soda/fizzy drink will overflow as the liquid expands, but it won’t explode and cause as much of a mess inside the freezer.

You should pay very close attention when using the freezer to deliver a quick burst of cold before drinking to avoid dropping the temperature too much.

The idea is to take the supercooled soda out before it reaches 4°C when the water inside the can starts to expand.

Taking the can out before this point will allow you to enjoy cooler soda without risking the explosive effect.

Ideally, you’d want to keep a close eye on the soda and check it after about 20 minutes. Anything after 20 minutes or so risks the can dropping to a temperature below 4°C, which could put pressure on the can.

In this case, you should be careful when handling the can or bottle of soda/fizzy drink, as disturbing the container could cause a preemptive explosion.

Furthermore, you can place baking soda inside the freezer to lower the freezing point of a soft drink to enjoy a refreshing drink.

You can also get rid of Smelly Fridge by using baking soda because baking soda is similar to salt.

Alternative Methods To Cool Your Soda

Instead of risking an exploding can of soda, there are better ways to show your soft drink or fizzy drink and, much more rapidly, to boot.

You could always place a can of soda in the refrigerator. The ambient cool temperature inside will slowly change the temperature of your soda, although air is a poor heat conductor and will only accomplish this process slowly.

By far, the best way to cool down your can of soda is to put it in a cooler or bath of ice water.

Another interesting property of water is its heat retention.

A warm soda/fizzy drink placed into ice water will quickly transfer that heat into the water itself, leaving the can ice cold much quicker than if you left the soda in your refrigerator.

This is partly due to water’s own chemical properties and the fact that water is a much denser collection of molecules than ambient air.

All of that water can run over the surface of your can of soda, touching more of the can than air does in less time.

Since water retains heat very well, there won’t be much of a feedback loop, so your can will remain cold rather than sucking up heat that the water takes on from the environment.

Overall, using an ice bath to cool down a can of soda should only take a few minutes as opposed to the hours required by a modern refrigerator, all without the risk of an explosive mess that comes with using a freezer.