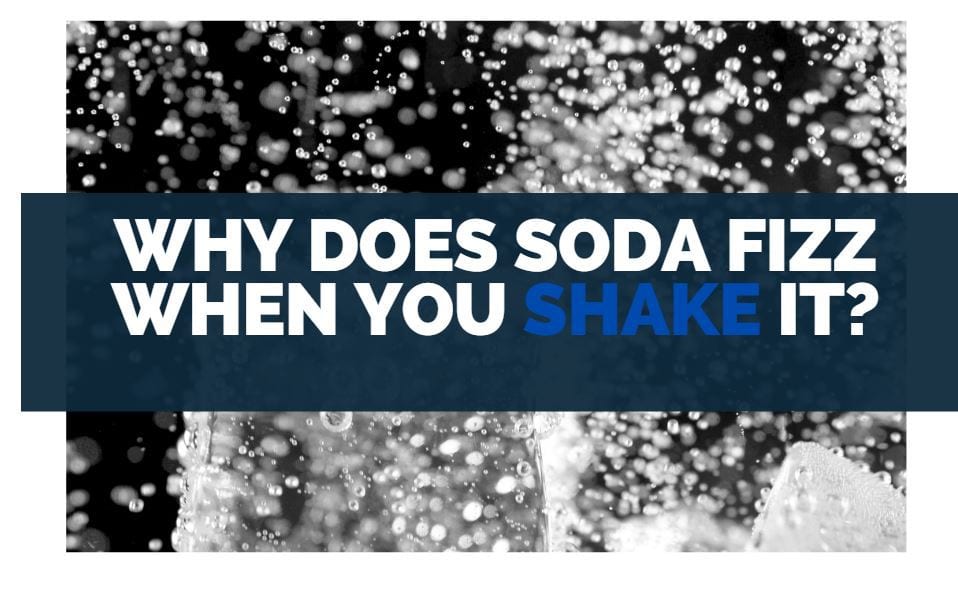 Did you know that soda is the most popular drink in America? In 2017, the average American drank 44.7 gallons of soda. Compare that to 28.3 gallons of bottled water!

Why does soda fizz when you shake it?

Soda contains dissolved carbon dioxide so when shaken, bubbles form, which provides an easy way for the C02 gas to escape.

When soda or fizzy drink is shaken, the gas from it escapes more quickly, resulting in more fizz than usual.

There is much more to know about the exciting world of soda or carbonated drinks. Keep reading to find out all about it!

Why Does Soda Fizz When You Open It?

Other than causing the fizz in soda, carbonation adds a weak acid to your soda.

This weak acid does two things – it both acts as a preservative, as well as giving your soda a bit of flavor. But, does soda lose some of this carbonation when it is shaken?

You may recall that carbon dioxide is a gas. However, when it is forced into a tight space, such as a can or bottle of soda, it is forced to become a liquid due to the high pressure.

This pressure gets lower as the bottle cap or can tab is removed, which eventually causes the fizzy bubbles we all know and love.

Tiny bubbles caused by a shaken soda help the carbon dioxide in it escape more rapidly. Once the can or bottle of soda is open, the gas escapes, commonly referred to as “going flat.” By the way – other ways to get your soda to go flat include dropping, throwing, or rolling the soda.

The unopened can or bottle of soda traps gases in it, which causes an increase in pressure from within itself.

This causes the gases to escape with Atmospheric Pressure, resulting in a soda explosion!

Read more about this process in “Why Does Soda Explode When You Shake It?” towards the end of this article.

In the gas form, the carbon dioxide rises to the top of the soda can or bottle, which is then released into the atmosphere in the form of soda with a lot of fizz.

Carbon Dioxide Gas is already natural in the atmosphere anyway, so escaping the soda can or bottle is not a bad thing! 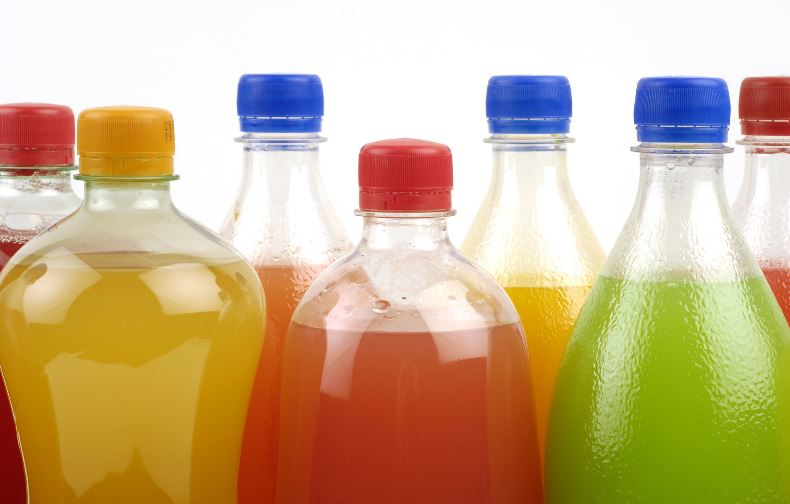 Chuck Wright says that gas doesn’t escape from unshaken liquid because of the surface tension of bubbles.

It takes a lot of energy for a small bubble to be formed, but once it is formed, small amounts of energy are needed to expand the bubble in bottled soda. Shaking a can or bottle of soda adds more small bubbles into it, allowing the dissolved gas to join bubbles that are already made instead of forming new ones. Look at the picture below for a slightly simpler explanation.

In other words, carbon dioxide exerts pressure when it is not dissolved. When the gas is exposed to air, it slowly goes into the atmosphere after being released into the air.

This causes the drink to go flat.

If you were to totally seal the soda, allowing no pressure to get in or out, then there would be a high amount of fizz in it. For more powerful carbonation, soda has to the contact surface should be pressurized.

Why Does Soda Fizz When You Add Ice?

There is nothing like a cold glass of soda at a barbecue on a hot, summer day. But, why does soda fizz when ice is added to it?

The main reason is the ice pushes the gas bubbles out. As the ice is added to your soda or flat soda, it starts to get frothy (or, fizzy) as an attempt to get rid of more carbon dioxide. According to Gerard Liger-Belair, a physics professor in France, “to escape into the form of bubbles, the liquid needs some tiny imperfections in the glass.”

Dr. Daniel James Berger got his Ph.D. in organic chemistry.

He says that “adding ice can reduce carbonation in your soda by providing surfaces on which carbon dioxide bubbles can form.”

He also notes that since soda is mostly water, there is no chemical reaction occurring when ice is added to the soda container since it would have already happened. Dr. Berger also points out that your soda will dilute and taste weaker once the ice is put in.

If you don’t like the ice causing fizz, try to rinse your ice with cold water, drain it, put it in your glass, and then pour your soda. This would make it so the ice has fewer imperfections to interact with.

How Long Does It Take A Shaken Soda To Settle? 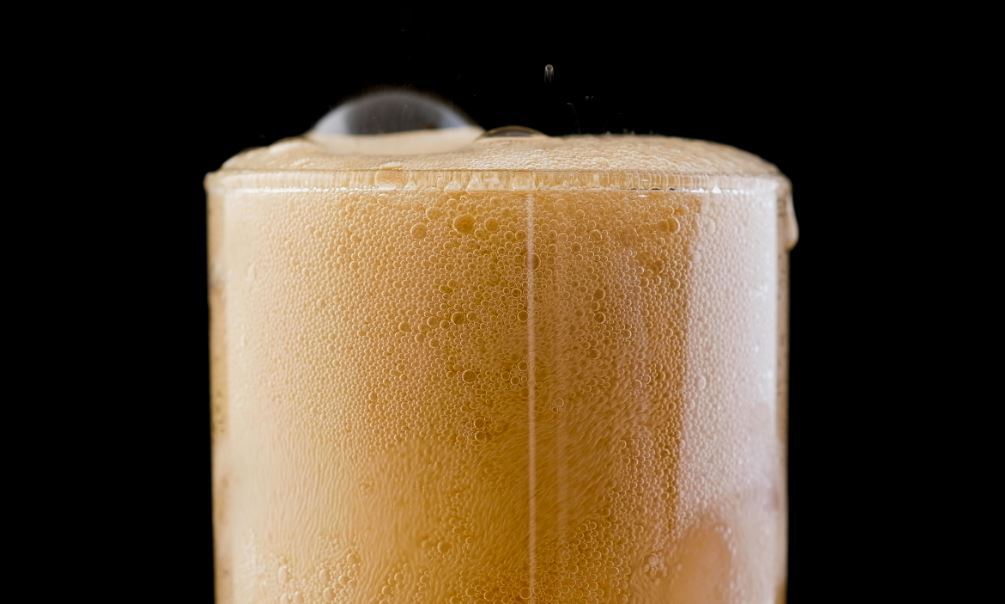 It happens – you’re holding your soda, and you drop it, or the dog swats at it and rolls away. So, what should you do in order for the soda to be drinkable again?

One tip is to put your soda or soda flat can down on a flat surface and drum on top of it for 10-15 seconds. Tapping the top breaks up the bubbles, so they aren’t all in the same area.

If you have a soda bottle, though, it will be a bit more challenging.

First, tap around the sides near the top, making sure that you get around to near the curved part just below the cap.

When you are opening the bottle, make sure you open it slowly. You may hear a hiss – that’s the sound of gas escaping.

If you’ve opened the bottle in the right amount, no liquid will escape. After you open it for the initial time, wait 15 seconds to open the bottle more. Then, wait another 20 seconds and open the entire bottle.

Whether you are opening a bottle or a can, it is recommended that you either do this near a kitchen sink, or you have plenty of paper towels or napkins near you.

By the way, unopened soda can go flat as well if it is left out long enough. If it is not stored in a cold place, then soda can go flat within a matter of days! However, keeping it in the refrigerator prevents your favorite sodas from going flat.

Why Does Soda Explode When You Shake It?

Many ask, why does shaking soda make it explode?

Who hasn’t shaken a soda when they were a kid, excited to see who would open it next? You probably ran away, giggling, when they were chasing after you covered in it!

But, have you ever wondered exactly why soda explodes when it is shaken?

This is because the pressure that has kept the carbon dissolved is released.

Shaking the can or bottle before opening the soda or carbonated soda, however, allows some of the Carbonic Acid floating at the top of your soda with fizz to get suspended in the liquid.

This extra carbon stays in your soda as bigger bubbles than the carbon that is already dissolved, even though the bubbles may look the same size to the human eye.

These large bubbles quickly rise to the surface of the soda, causing an explosion on your innocent friend!

Let’s say that your friend intentionally shakes your soda, and they think you don’t know about it. All you would have to do is let your soda sit unopened for a while, before eventually opening it.

This allows the large bubbles to work themselves out of the soda, and back to the top of the soda where they should be in the first place.

Soda fizzes because of carbonation and goes flat if it is left open for too long. Other factors for flatness are whether the can or bottle gets shaken, rolled, or thrown, the material surrounding the soda or soda flat, and the temperature of the soda.

The fizz is caused by bubbles in the soda or Soft Drinks, but you can add more fizz to your soda by adding ice to it.

Now, you know more about the science behind soda and the fizzing process.