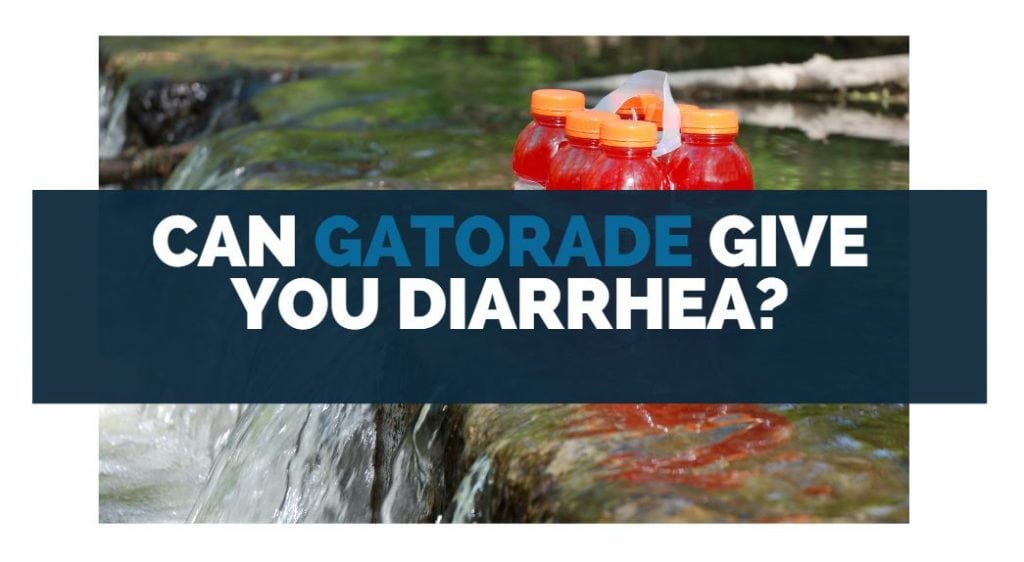 Drinking too much soda or sports drinks can lead to ill effects, especially for those with pre-existing health issues or food intolerances.

Many sports drinks are loaded with artificial sweeteners and other ingredients that could cause you some discomfort.

Let’s take Gatorade diarrhea, for example; I was doing some research and came across a rather embarrassing topic, diarrhea…

Can Gatorade Give You Diarrhea?

Yes In some cases, Gatorade can give you mild diarrhea, loose stools or Watery Stools.

Artificial sweeteners, dyes, and sugar can contribute to watery diarrhea in some individuals.

This is especially true if you have a bowel disorder, Multiple Chemical Sensitivity, ADHD, or an autoimmune disorder.

These disorders can be affected by the artificial ingredients in Gatorade and cause digestion problems.

Though Gatorade is often advertised as a healthy way to stay hydrated after a workout, this typically only applies to athletes who work out intensely and consistently.

For most people, fluid intake does an excellent job of keeping us hydrated.

Gatorade can help with dehydration and Electrolyte Loss, and Gatorade does have sodium to replenish the sodium lost during an intense workout session.

This is most evident in athletes working out heavily in high temperatures or muggy conditions.

At this level, the positive effects of Gatorade and other sports drinks can be experienced.

Too much sodium can cause dehydration, so it is best to monitor how much Gatorade you’re drinking and how much you’re working out to ensure you’re not getting too much.

Gatorade and diarrhea go together when you take a drink in high quantities.

Too much sodium is a common problem in many American diets, and drinking sports drinks too often can contribute to that.

One of the ingredients in Gatorade that can negatively impact your health is sodium.

Too much sodium can build up in your body and contribute to several health problems like severe diarrhea.

Kidney problems and stones are among them.

This is especially true for people with pre-existing kidney problems.

Other artificial ingredients can contribute to poor kidney health as well.

The calorie and sugar-free Gatorade option, Gatorade Zero, has many of the potential health risks of Gatorade while also having more artificial sweeteners.

Artificial sweeteners and other artificial ingredients can contribute to serious health problems like Watery Diarrhea through years of build-up.

The best way to stay hydrated is to drink plenty of water throughout the day and limit artificial ingredients.

Drinking Gatorade and other drinks with artificial sweeteners should be limited as much as possible.

Can Drink Gatorade Dehydrate You? 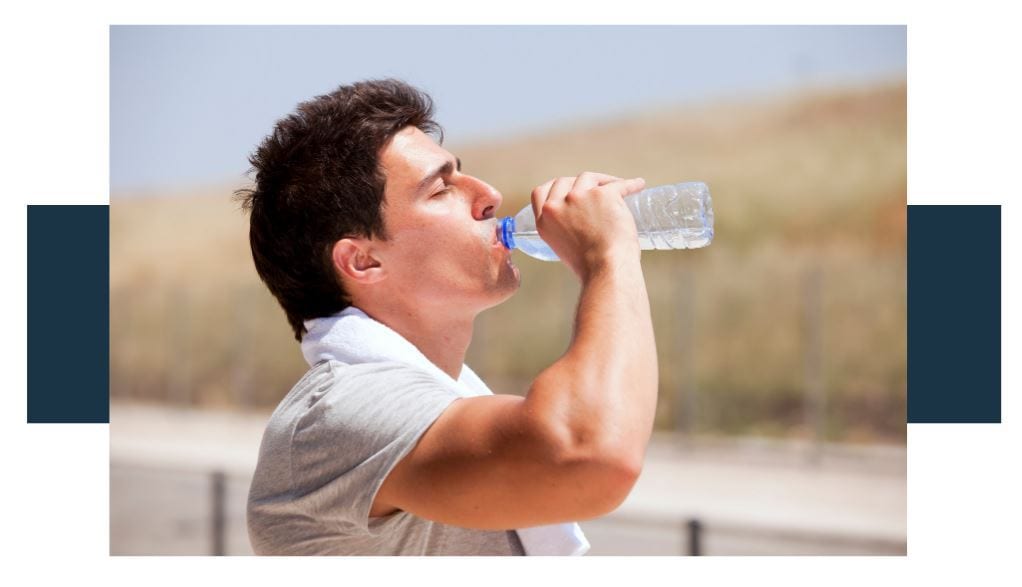 With a combination of factors, Gatorade is effective at hydrating people.

Especially after an intense workout and physical activity.

The electrolytes and carbohydrates work together to replenish what your body loses during a workout and keep you energized.

It can easily fix Electrolyte Imbalance with optimal usage.

Bottled water is also the main ingredient in Gatorade; nothing hydrates you better than water to keep body fluid persistent.

The positive effects of hydrating with Gatorade are mostly felt by athletes who regularly do outdoor activities at intense levels.

Typically more than an hour in high temperatures or muggy conditions.

For the average person, Gatorade can also help you feel better after workouts, but water does just as good of a job rehydrating.

When feeling the early effects of dehydration, Gatorade can be a valuable tool for hydrating quickly.

By replenishing more than water, Gatorade also replenishes salt and other minerals that can be decreased when dehydrated.

This is especially true for seniors who may need to replenish vitamins and minerals at higher rates than the rest of the population.

Before relying on Gatorade for all your hydration needs, it is essential to look at the ingredients. Gatorade contains sodium.

While sodium needs to be replaced after an intense workout, too much can cause problems.

Too much salt or sodium can cause severe dehydration and act as a barrier to weight loss.

Many people do not work out at the levels that require Gatorade or other sports drinks to replenish vitamins and minerals.

In these cases, the sodium from the sports drinks builds up in your body until it is washed out.

That is why drinking bottled water throughout the day is essential, no matter what else you use for hydration.

Gatorade also has sugar, which can contribute to dehydration in some people with pre-existing conditions.

This typically happens with diabetics, but it is essential to remember that sugar can cause adverse health outcomes other than tooth decay.

If you are not working out enough to require replacing sodium at the levels that Gatorade does, then sodium is building up in your body and acts as a hurdle in weight loss.

This can contribute to dehydration.

It is best to drink plenty of water throughout the day and limit drinking Gatorade and other sodium-heavy drinks.

Is Too Much Gatorade Bad for Your Kidneys? 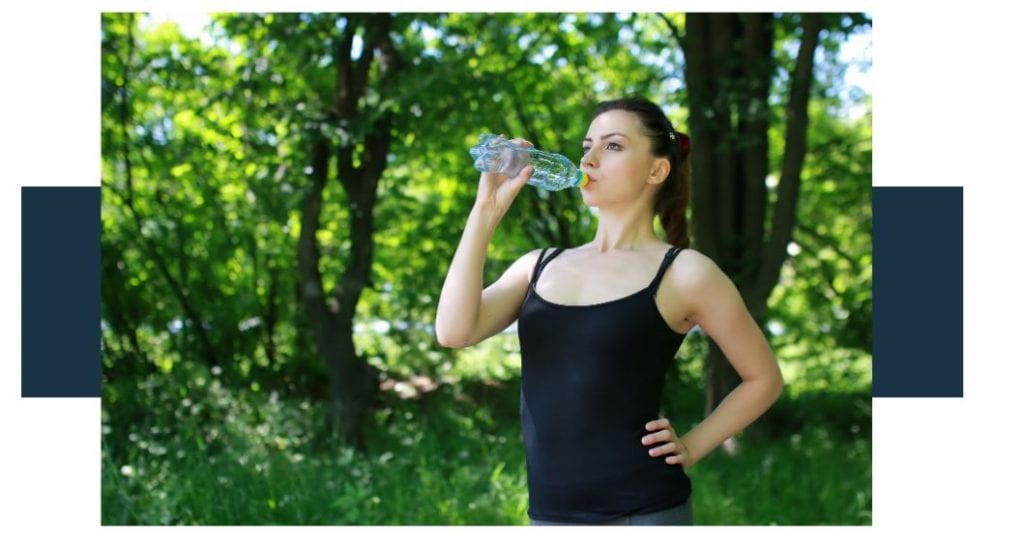 The build-up of these ingredients can affect your kidney’s ability to properly process and get rid of toxins in a similar way as soda does.

The kidneys already struggle to work correctly for people with kidney problems, and adding more toxins through artificial ingredients contributes to that problem.

This can cause those ingredients to stay in the blood and cause other serious problems.

A descriptive study by a Health Professional recommended that a person with kidney problems avoid sports drinks.

Avoiding Gatorade and other sports drinks is a must for people on dialysis.

This is because of the added vitamins, minerals, and herbs that dialysis cannot remove.

These ingredients will have no way to leave the body and will continue to build up and cause problems., including diarrhea. 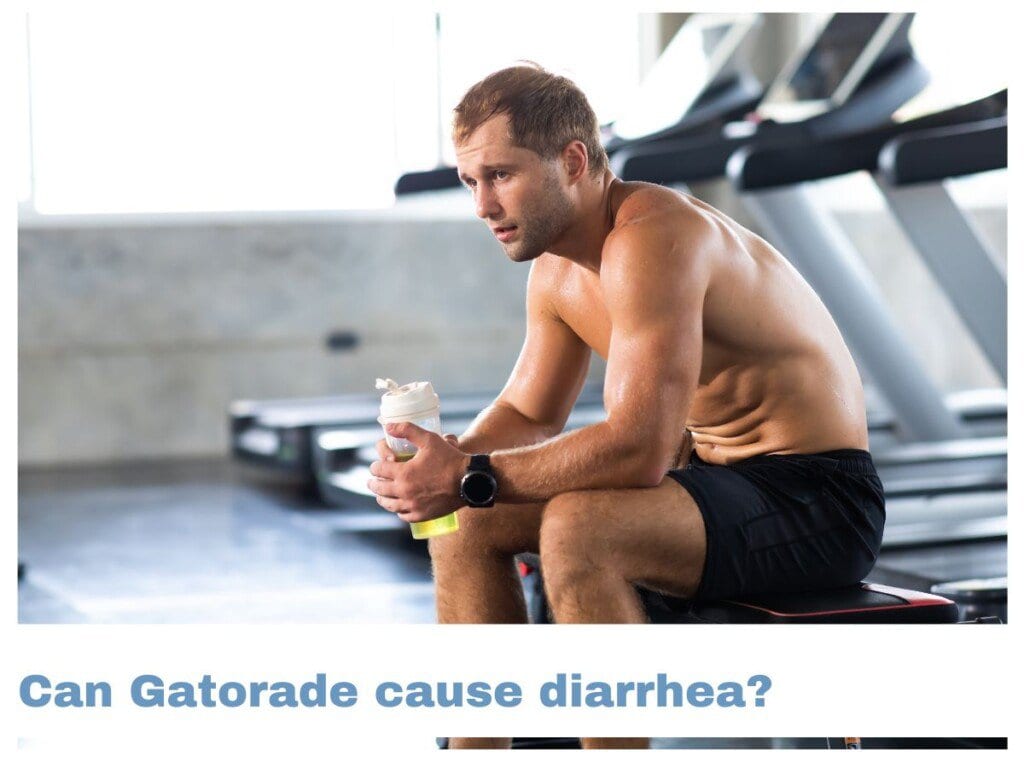 The ingredients in both build up in your system and can cause problems in your body’s functions.

Either is okay sometimes, but they are not suitable replacements for drinking water.

Hydrating with water throughout the day is the best way to stay hydrated and keep your kidneys functioning properly.

Side Effects of Gatorade Zero 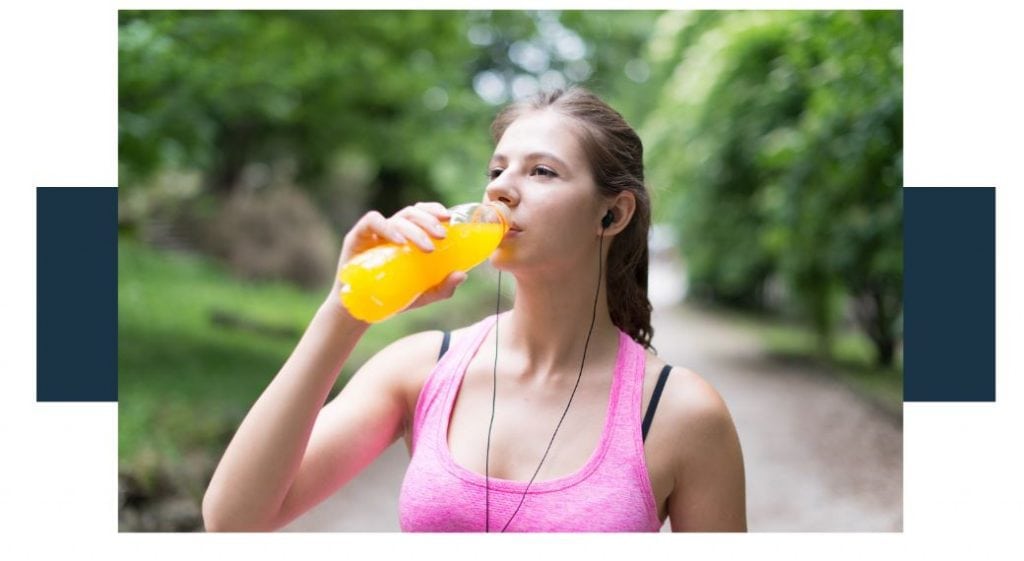 Gatorade Zero is the new no-calorie and low-sugar option from Gatorade.

It boasts the same hydrating powers as Gatorade without the added sugars or calories.

It is often touted as another healthy option for hydrating after a workout.

Just as with regular Gatorade, there is more than meets the eye when you look at the ingredients.

Like Gatorade, Gatorade Zero is fine to drink in moderation but has long-term health risks that can lead to similar problems.

Many of the ingredients between the two remain the same, and thus, Gatorade Zero is not a healthy option for kidney health or those with pre-existing kidney problems.

Since Gatorade Zero has little sugar, the sweet taste has to come from somewhere.

Does Gatorade Cause Diarrhea?

This is mainly in the form of artificial sweeteners and other artificial ingredients. 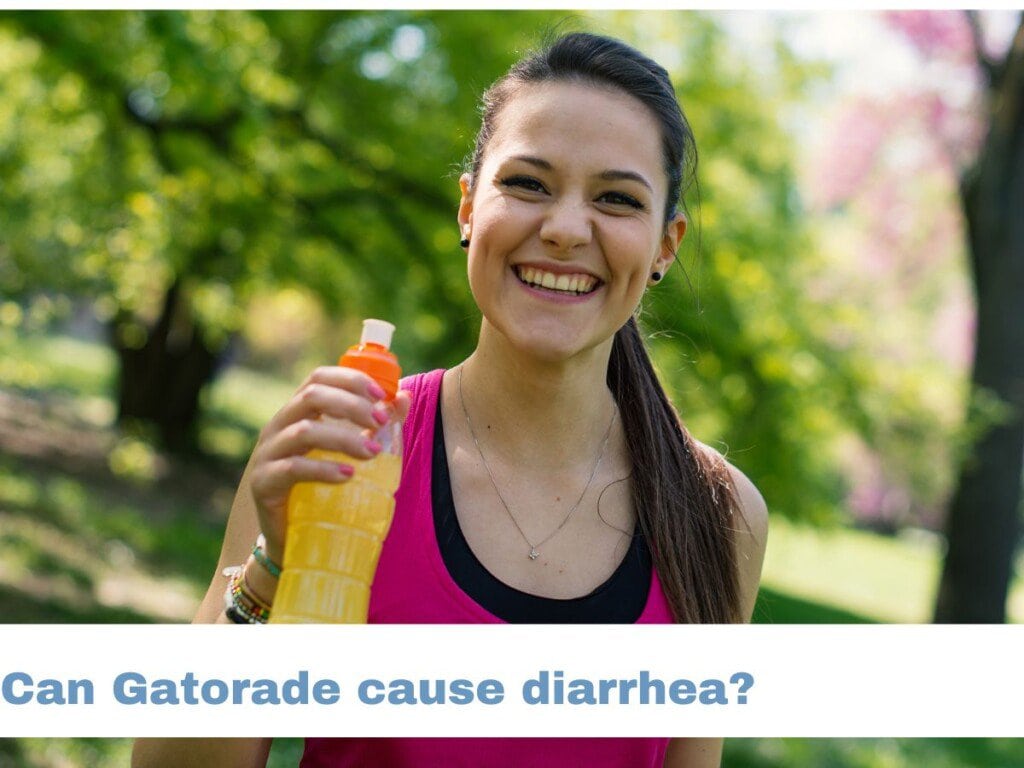 Artificial sweeteners are very popular as sugar replacements, but many potential health risks are still being studied.

All these side effects of drinking too much Gatorade zero can also contribute to heart problems.

While drinking Gatorade Zero will not directly lead to these medical conditions, it may help contribute to them. Gatorade Zero is still a new product, but its ingredients are very familiar, and we know what they can lead to.

Gatorade for diarrhea is a good option for those looking to rehydrate and replenish lost minerals after an intense workout while keeping their sugar consumption low. 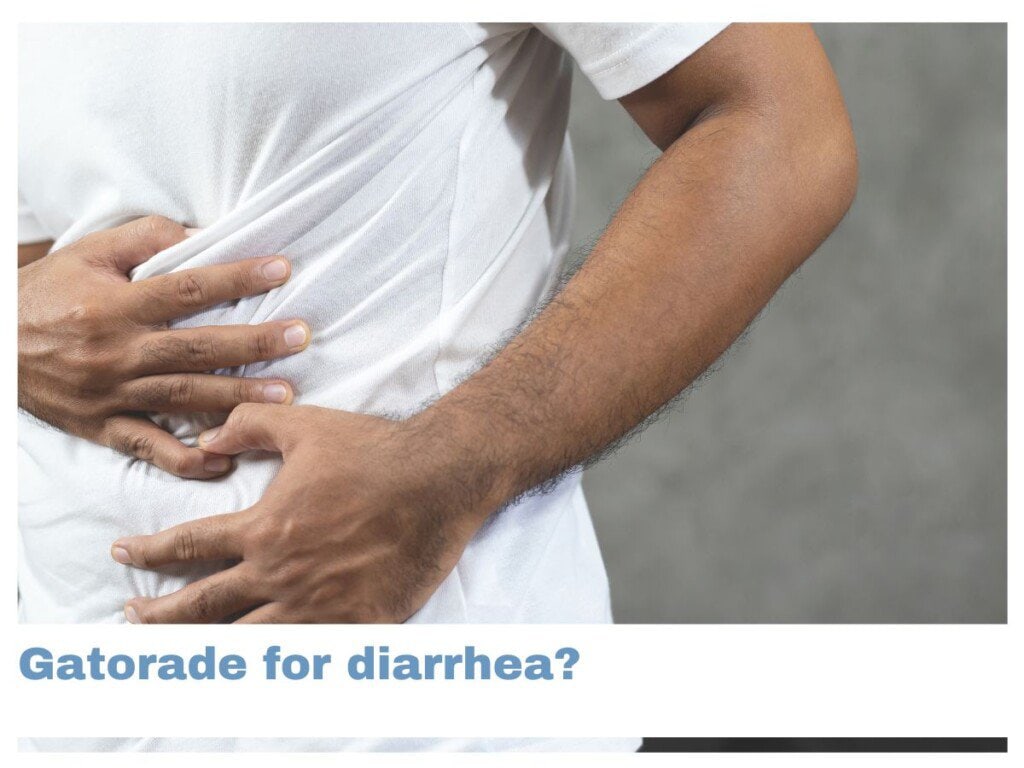 Drinking a little bit will not likely cause health problems like persistent diarrhea, but it is always best to drink plenty of water to stay hydrated.

While Gatorade has been promoted as a healthy drink, especially for after-workouts, these benefits are often only seen by athletes.

For the average person, water does enough to hydrate after a workout.

Gatorade should not be used to replace water except in certain circumstances, such as the early stages of dehydration or for athletes who routinely engage in intense workouts.