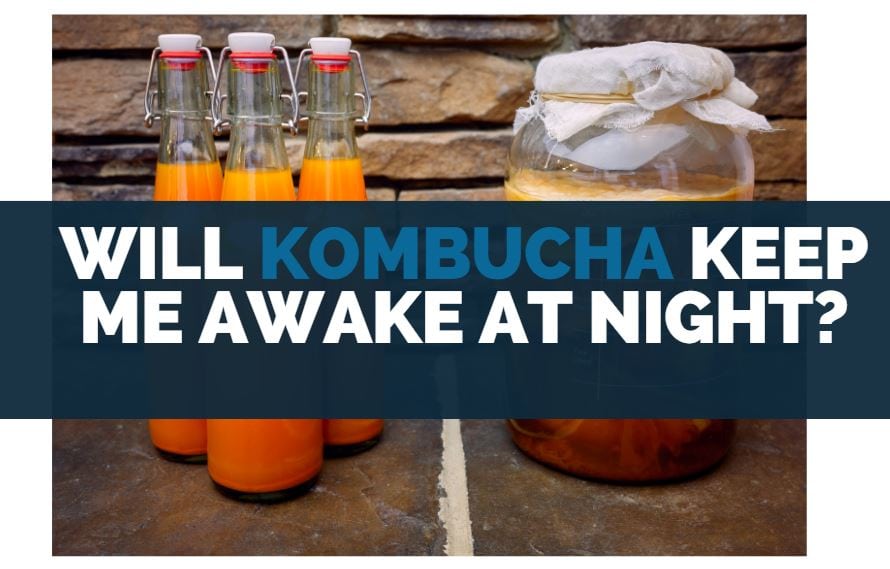 You have probably already heard that Kombucha (energy drink contains some level of caffeine content, some alcohol content, and lots of probiotics.

But does that mean you can expect the same alcohol content effects on your system as you would normally get from coffee? or an alcoholic drink?

But first, let’s get to the point.

Will Kombucha keep me awake at night?

Kombucha is unlikely to affect your sleep. That said however if you are highly sensitive to caffeine then drinking store-bought Kombucha will have some level of caffeine in it and may affect sleep if you were to drink it in the afternoon or early evening.

If you’re going to brew your own booch then use caffeine-free teas and it won’t affect your sleep.

Kombucha contains so little caffeine that it is almost impossible to replace coffee with it. But some people have had a different experience.

It is important to remember how much we all differ in our bodies and habits. So let’s get into it.

How Do I Go To Sleep With Kombucha? 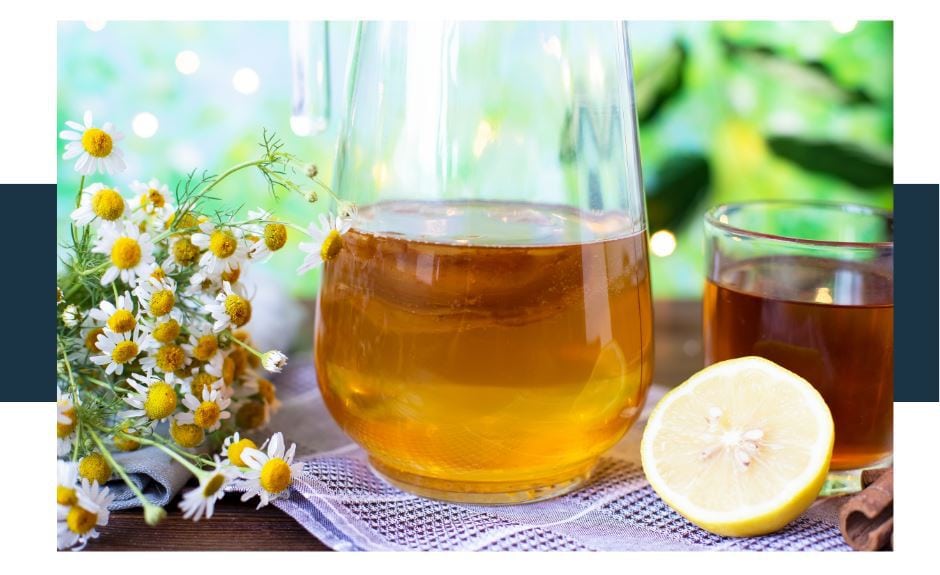 Let’s get one thing clear – the energy boost you’ll get from booch isn’t the same as what you’d get from sugar or caffeine that said it does contain electrolytes, vitamins, and minerals which are energizing and hydrating at the same time.

So rather than reaching for a sugary soda or a cup of coffee after a sleepless night, you could reach for a kombucha instead.

There are cases whereby people that reach for coffee or sugary drinks end up with symptoms like palpitations, nervousness, higher blood pressure, and that shaky feeling like they have to do something right now.

Coffee contains some Caffeine levels with some artificial coloring that can make your body react like this while still feeling tired and sleepy and especially if you’re dehydrated.

So when in that tired and restless state caffeine can often makes your body too nervous to relax – rather than give it the energy boost that you’re craving.

Hydration and electrolytes are essential – so consider that first.   Water and booch are great companions.

Did you know that Kombucha contains B vitamins that are important for your nervous system?  it directly influences and stimulates your nerves which can actually help regulate your sleep, not just help to wake you up in the morning.

Keep in mind that you should be moderate in everything you consume.

Since everyone’s height and weight are different, we can’t really tell you how much is too much in numbers. There is no test you can take to decide how much Kombucha you should drink.

That said please do remember that Kombucha does still contain small percentages of alcohol and caffeine.

Usually, those amounts are smaller than those found in beer or coffee.

But still, if you go overboard, it could affect your sleep – or even worse you could feel nauseous

Remember that too much of anything isn’t the best option since even too much water or too much oxygen can cause issues for any human body out there, no matter the differences we all share.

Maintaining A Sleep Routine with Kombucha 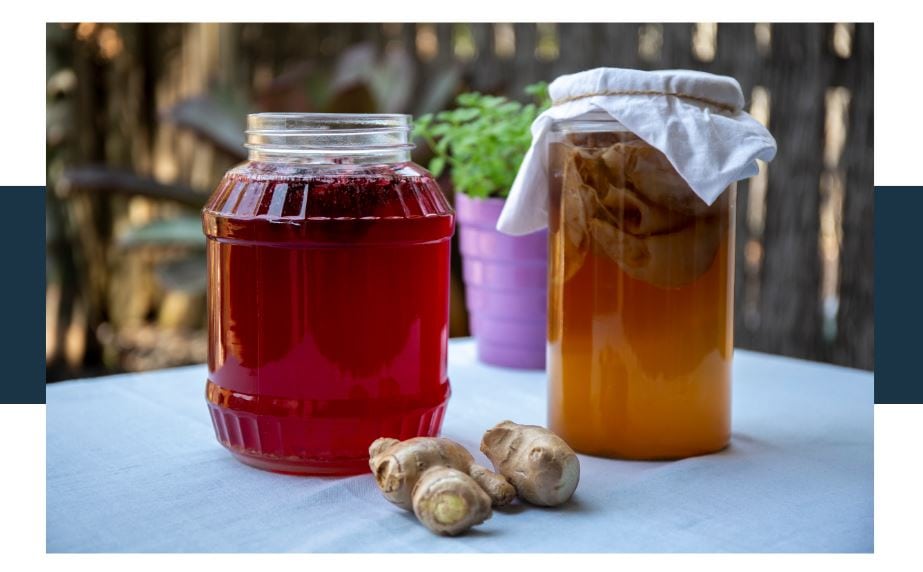 You should be able to maintain a regular sleeping schedule unless you are over-drinking Alcoholic kombucha just before bed (or ever).

It usually only contains 8 to 14 mg of caffeine per 8 oz serving. If you are not really a fan of coffee and don’t take it on a daily basis, 15 mg is enough in your Kombucha to give you some energy and make you feel something similar.

Kombucha can help some people feel refreshed (benefits of kombucha) and more awake in the morning which is exactly why it’s best to take it in the morning and not before sleep.

When Should You Not Drink Kombucha?

So what is the best and worst time to drink standard kombucha or Kombucha?

Now, depending on your gut health and energy levels – you need to make your own schedule.

There are two main options if you drink Kombucha once a day.

You can either choose to drink it first thing in the morning or midday.

If you have a strong healthy gut and aren’t afraid of sodas and acidity, you will most likely benefit from drinking it on an empty stomach.

It will help with the initial energy and keep you motivated and fresh.

When your stomach is empty, the healthy probiotics will arrive at your intestines faster and this will maximize the benefits probiotics offer you.

But maybe only do this if you are already used to them. 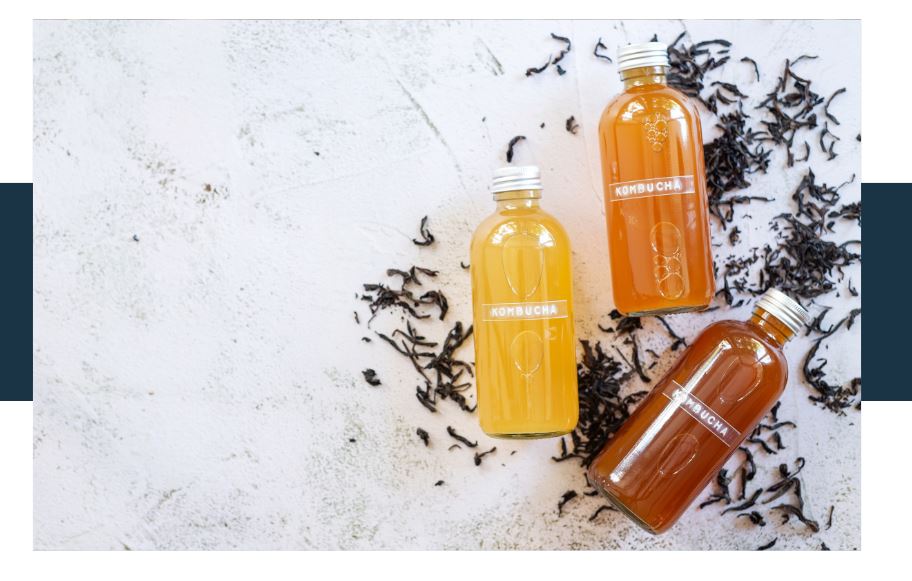 If you have ever had issues like gastritis, stomach ulcers, or anything similar, don’t risk it. Kombucha is acidic and could potentially add more acid to your stomach which is already damaged.

So drink your glass during the afternoon.

This will help maintain a healthy digestive system and help with bowel movements after lunch.

It will help prevent that lethargic sleepy feeling after eating. Since it also helps fight indigestion and bloating, you will most likely benefit from this brew after your main meal.

Kombucha natural ingredients also contains some alcohol, so better not to drink it early in the morning if you are sensitive to it.

You can also drink Kombucha after your exercise, but not before bed. If small amounts of caffeine can affect you, just don’t try it out.

Drink it in the afternoon around your meals to help digestion and especially if you wish to lose a few pounds.

Since Kombucha is made with green or black tea, it does have caffeine, but after the process of fermentation, it really is almost inexistent.

If tea does not wake you up, Kombucha won’t either.

If you wish to brew your batch with less caffeine, you can take some steps to ensure this.

The fermentation process should be a bit longer since SCOBY, the colonies of bacteria and yeast can feed on caffeine.

Use some teas that are not as caffeinated.

This includes hibiscus, white tea, or green tea. Keep the two or three tea bags in there for SCOBY to thrive.

Let the bags steep first for about 30 seconds in order to lose some caffeine.

Then you can use them to feed your healthy gut bacteria and yeast family.