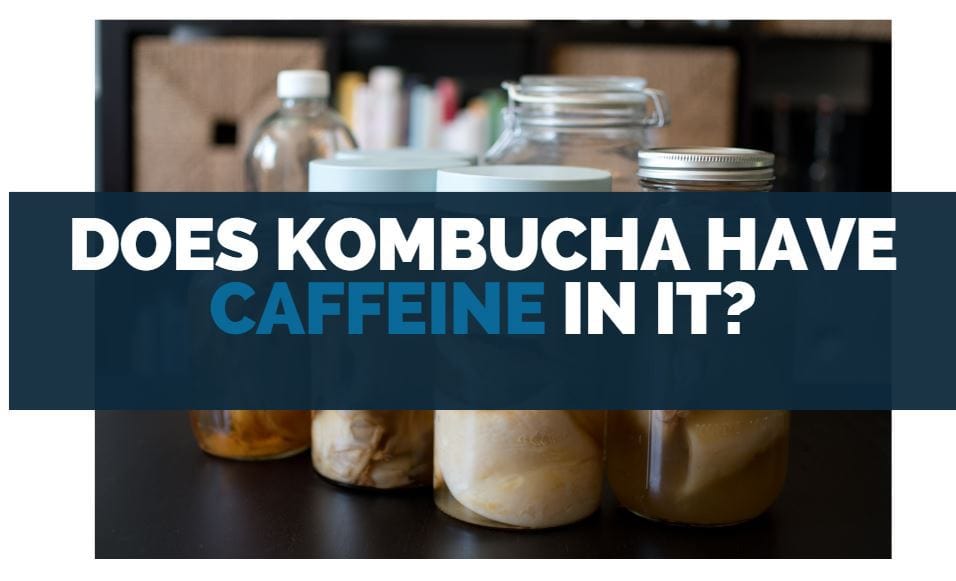 So have you just learned how to make your first Kombucha?

If so then I hope it turned out just like you wanted it to!

Or maybe you are just one of those people who has just tried booch and needs to know all there is to know about it.

It doesn’t matter if you are just curious and have questions. OR if you’ve just t ran out of coffee and wish to know if your fresh Kombucha juice can replace it.

So, does kombucha have caffeine in it?

Kombucha tea has some caffeine in it yes.

Keep in mind that the liquid used to make it is usually black or green tea leaves which contains natural caffeine content.

Booch can help somewhat when you are missing coffee beans but it is just not the same thing.

Keep reading to find out more about its natural caffeine content and how it actually makes you feel (other than tickly bubbles, of course).

How much caffeine is in kombucha? 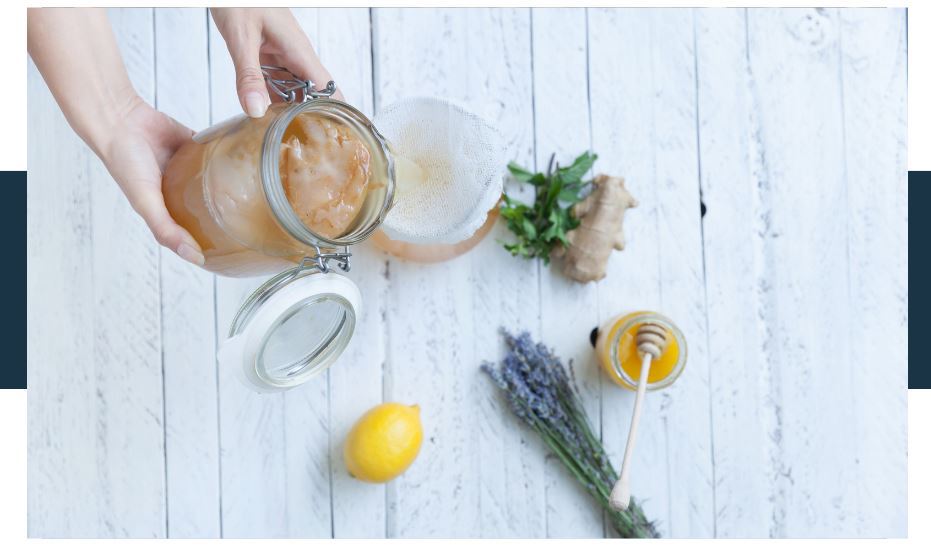 Not enough for you to feel the kick.

Differently made versions of the drinks contain different amounts of course, but nothing drastic.

You can find out more about how much caffeine is in kombucha by following the link.

However, depending on brewing process, you can get the optimal amount of caffeine even if you are a bit more on the sensitive side.

For example, 15 ml is a great amount of caffeine for you if you usually don’t drink coffee on a regular basis.

It is still not the same when drinking coffee though.

As coffee has a distinctive taste and you no doubt feel that caffeine kick in just seconds after the first sip but that may not be the case with booch.

Kombucha is still a healthier option than coffee but not a substitute if you’re after that caffeine hit, but other than caffeine, what else is in there? Alcohol.

Now, I don’t recommend drinking excessive amounts of Kombucha to feel caffeine like you would with caffeine in coffee.

You will probably get sick before you feel anything and possibly even a little tipsy!

Due to the fermentation process, which allows you to get probiotic cultures in your drink as well, alcohol is also an ingredient you can find in your finished product.  So be mindful of that

If you are so inclined then there are some ways you can make your Kombucha more alcoholic, some that are mass-produced have a higher percentage of alcohol and are sold like light beers.

Most of them, however, are sold as soft drinks.

This means you can buy them like you can buy any other non-alcoholic beverage – no matter your age.

Does Kombucha keep you awake? 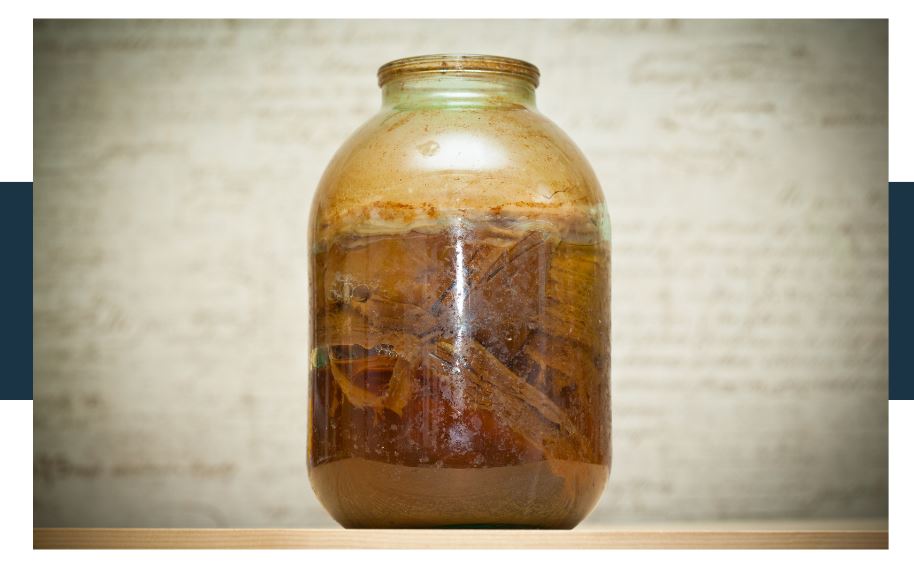 If you decided to quit coffee cold turkey and you find yourself craving just a little bit of caffeine, a stronger Kombucha can provide your body with just enough of it to keep you from going into that shaky nervous state.

However, it doesn’t really matter if your Kombucha is stronger in caffeine or not.

Regardless of the percentage of caffeine, it does not work anywhere near as well as coffee.

People who usually drink coffee to wake up and be more focused don’t get the same impact while drinking black or green tea.

Coffee usually has a much stronger effects of caffeine. So, you can take it unless you have Caffeine sensitivity.

Other caffeinated beverages such as Coca Cola also contain a lot of sugar content.

When kids get “hyper” on coca cola it is mostly due to the high levels of sugar, not caffeine.

Since Kombucha can be made with both artificial sugars and fruits and other foods instead, this will also play a role in how it affects you.

Most people will tell you they get nervous, jittery, or anxious when consuming too much coffee while at the same time they stay sleepy and tired.

Caffeine can have an opposite effect on you if you take a bit too much or a bit too little.

If it is refreshing and cold, it can wake you up by putting you in a good mood and cooling you down since our temperature starts to rise as we wake up, especially if you wake up fast and get up right away.

But what probably won’t wake you up is the caffeine in such low doses.

If it does, it could be the high sugar content.

If your Kombucha brands of your choice have a bit more alcohol in it, it will probably even make you sleepy or keep you awake right before you crash and take the longest nap.

But these are all possibilities we wanted to cover so you know what you can expect.

None of these cases doesn’t need to happen to you.

Maybe you have been drinking Kombucha for years and didn’t even wonder about caffeine or alcohol in it.

Maybe you just started and felt nothing different.

However, it is safe to say that not every Kombucha will help you wake up, and not every time – if it ever even helps you.

So keep that in mind. We are all different, we have different bodies, metabolism, resistance to substances, and habits.

So of course, if Kombucha wakes you up after one glass – don’t go preaching that that is what it does. Perhaps it did that for you. And maybe it was due to three glasses of sweet drinks and two chocolates you had just before Kombucha.

That’s maybe something to think about…

Does Kombucha Gingerade have caffeine?

Kombucha Gingerade is a great option for those of you who are looking for a drink to replace those unhealthy, sugary, and caffeinated drinks that make your gut scream.

This Gingerade is vegan, gluten-free, and organic. It is made with green and black tea – which means there is a presence of some caffeine in Kombucha.

But this particular product has enough alcohol content to be considered a beer.

This means you have to be of age to purchase it and should treat it as an alcoholic drink, meaning you should not shake it or drink too much.

It still contains healthy bacteria with many health benefits for a normal gut function called probiotics.

Gingerade contains very low levels of caffeine, so while it is considered an alcoholic drink, it is not considered caffeinated.

If you compare this brew to coffee, just to get a clear picture of what we are talking about, it only has about 10 mg per 8 oz, while coffee contains 100 mg per 8 oz.

This is a strong and clear comparison to show you how little caffeine there actually is in this drink.

If you wish to know exactly what you are buying and consuming, which should be the whole point of healthy energy drinks, we advise you to always read the label and look for percentages.

It might not be the most interesting and fun thing you will read this week, but it will help you know what to expect.

This goes both for alcohol amount and milligrams of caffeine.

If your goal is to help your gut stay healthy, focus more on probiotics while reading the label.

If you want to have some tipsy fun while still drinking the most healthy option out there, you might find your type of Kombucha on another shelf.

And if you are looking for something to wake you up – well, you can try to find the caffeine percentage on the label although it doesn’t always say.

If you read it contains green and black tea, you can expect some levels of caffeine

. But keep in mind that only about a third (or less) of caffeine gets to your final product.

So find your favorite or do it yourself.

We always encourage you to try what is out there in the Kombucha world, but you might just find the right recipe.

And if you fail so what? There is plenty of advice in our Booch Section.

So have a browse around and try again.