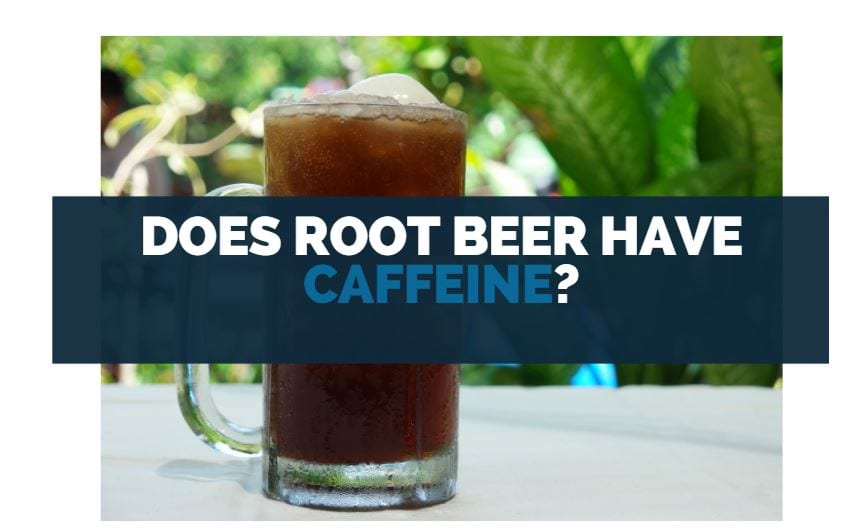 Root beer is a creamy and beloved soft drink consumed all over the US and worldwide.

Root beer is a popular drink made from the sassafras root for its earthy tones, sweet flavor, and full-bodied texture.

And despite being so popular, many people don’t know much about root beer. And I get questions on my blog regularly.

Does root beer have caffeine?

The answer is most modern varieties of root beer do not contain caffeine. If there is caffeine in root beer, it is generally added after the fact and is not produced as a part of the root beer brewing process.

The lack of caffeine has made root beer popular for those who want to limit caffeine consumption.

Root beer is also suitable to drink by religious groups that forbid the consumption of mind-altering substances, such as Mormons.

People may still have many questions about root beer, so we put together this comprehensive guide on this favored drink. 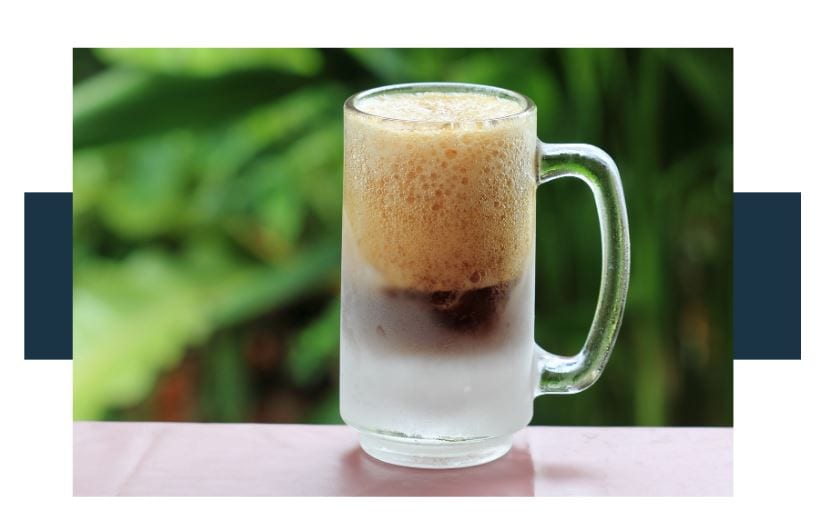 Root beer is a type of soda, but it is not considered a cola.

Root beer is not a cola because it usually does not contain kola nut extract.

Many would think that for something to be a cola, it must have the section of the kola nut.

This lack of kola nut makes most brands of root beer caffeine-free.

Caffeine is produced by treating the kola nut in most colas, such as Coca-Cola Company and Pepsi.

So colas contain caffeine as a natural part of the production process.

These ingredients explain why root beer has a unique taste.

Root beer was created to be a grain beer and is brewed using similar methods. However, root beer typically does not contain hops, which makes beer alcoholic.

However, most modern root beer is not made with sassafras root anymore. This is because sassafras contains a molecule called safrole, a carcinogen (cancer-causing agent).

As such, the FDA banned using sassafras for mass-produced food and drink in the 1960s.

Most modern root beer is now made with artificial sassafras flavors. Some varieties are made with sassafras root that has chemically removed the safrole. 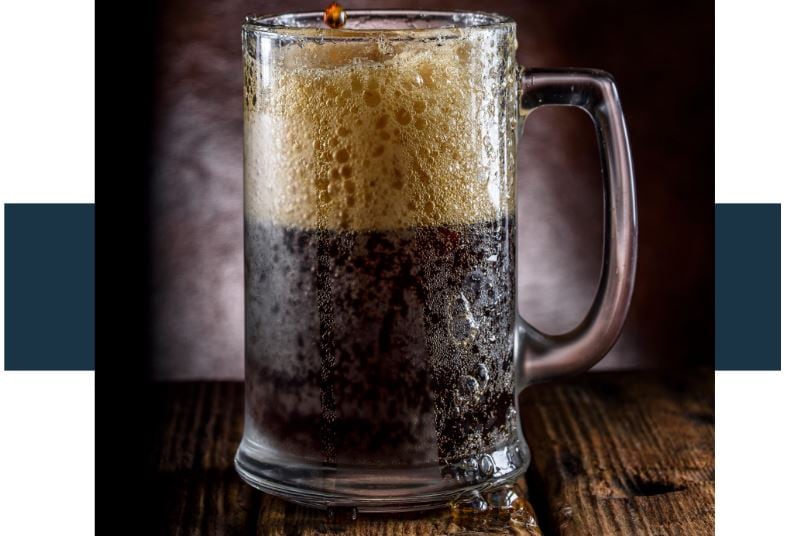 In general, no. Most varieties of root beer do not contain caffeine.

The original formula for root beer from back in the 1870s did not contain caffeine.

In contrast, most colas, such as Coca-Cola, explicitly included caffeine as a therapeutic agent.

Also, unlike colas, root beer was not originally marketed as a medicinal product, whereas Coca-Cola and Pepsi were.

Here is a list of some popular brands and flavors of root beer  that do not contain caffeine:

These are some favorite root beer brands.

Most popular brands in the US are caffeine-free, although some brands have caffeinated versions of their famous drinks.

If a root beer contains caffeine, it is most likely added in during the production process rather than being a natural result.

Much Caffeine intake is quite inadequate for health conditions. Caffeinated beverage intake can cause many diseases, such as Restlessness and shakiness, Headaches, Insomnia, and many more.

So if you find a root beer brand with caffeine, the caffeine was added after the fact.

A regular Barq’s root beer contains approximately 22 milligrams of caffeine per 12 oz. can.

In contrast, a typical can of regular Coke contains about 34 mg. A 12 oz. can of Pepsi contains 38 mg of caffeine.

So even if a brand of root beer contains caffeine, it is often less than cola brands. Root beer also has less caffeine than regular green or black tea, containing between 28-48 mg per cup.

How to Tell if Root Beer Has Caffeine

For foods that naturally contain caffeine, such as chocolate, tea, and coffee, manufacturers are not required to list caffeine on the ingredients list.

Since root beer does not naturally contain caffeine, it will list it on the ingredients label if a root beer brand does have caffeine.

However, the FDA does not usually require brands to list the exact amount of caffeine on the label.

So if you are curious about how much caffeine your root beer might contain, you can check the official brand website for details.

No variety of soda is considered “healthy” in general.

But some varieties of soda are considered healthier than others.

Various brands of cola, such as Coca-Cola, contain phosphoric acid, which is known to eat away at the enamel of the teeth, which can cause cavities.

In contrast, the Diet version of Root beer does not contain this corrosive chemical and is usually considered easier on the teeth and gums.

However, root beer does contain high quantities of sugar. For example, a 12 oz. can of A&W Root Beer includes 46 grams of sugar.

In contrast, a 12 oz. Can Coca-Cola and Pepsi contain 39 and 41 grams of sugar, respectively?

Sugar is root beer’s main “unhealthy” ingredient, as it can cause obesity, insulin sensitivity, and cavities.

As such, while root beer might be considered healthier than cola in some respects, it is not more beneficial than cola in many other respects.

Either way, soda, in general, is not healthy and should be a rare treat rather than a daily drink. 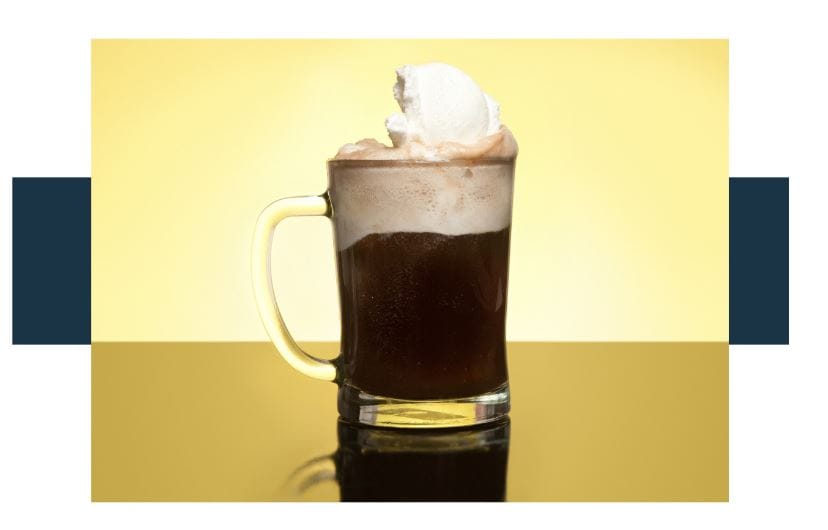 Generally, no, root beer is not alcoholic.

Although brewing root beer is similar to beer, root beer does not usually contain hops, the main alcoholic ingredient in regular beer.

So root beer, in general, is a non-alcoholic beverage.

Even though root beer is not made with alcohol, many people use root beer as a mixer for alcoholic drinks.

Root beer typically goes well with rum and whiskey as it brings out each kind of liquor’s sweet vanilla ice cream flavor.

Cans of Root beer are one of the country’s most popular kinds of soda, and for a good reason and give a flavorful taste.

Famous Root beer, as traditionally brewed, does not usually contain caffeine, but some brands add caffeine to give it some extra pep.

A root beer containing caffeine should be on the ingredient label. So it would be best if you never got a root beer soft drink with caffeine, but that does not make a note of it.