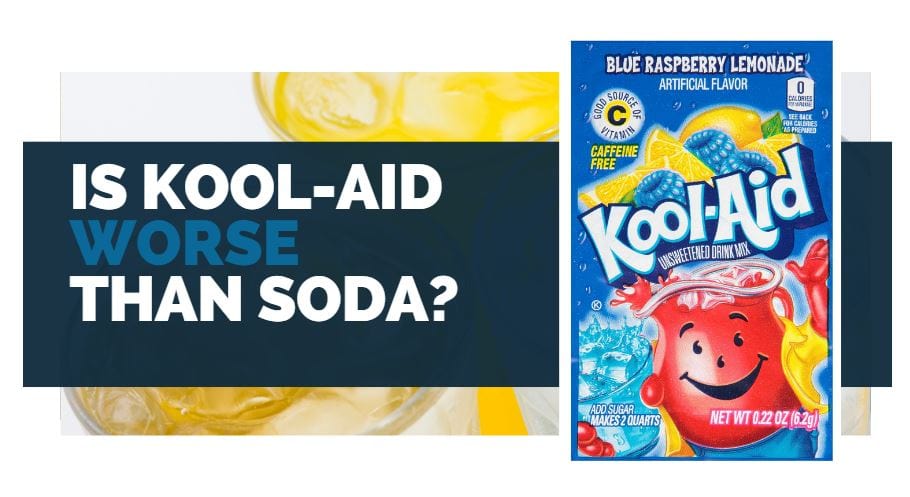 Stores are over stocked with various appealing and very well marketed soft drinks these but when it comes to picking which one to drink, it is important to consider a variety of factors including their ingredients

You need to pay attention to these ingredients and calorific content.  But let me answer this first.

Is Kool-Aid Worse than Soda?

No it’s not Worse but that can be subjective.  Let me explain.

When comparing Kool-Aid and soda, both have large amounts of sugar so it is important to look at what else these drinks have to offer before deciding whether its better or worse.

Kool-Aid has fewer calories than your typical soda, contains vitamin C, and is not carbonated. With these factors in mind, Kool-Aid is typically a healthier option over soda.

It goes without saying that its important to limit the number of calories that you take in drinks.

Liquid calories do not offer much in terms of nutrition and can be considered “stealth calories.”

These calories can be difficult to keep track of when trying to keep healthy.

By limiting the number of calories you take in through liquids, it can be easier to keep track of those stealth calories.

Vitamins are something that everybody needs to function properly. Vitamin C is an important vitamin since it helps our body fight diseases and can help keep us healthy.

Drinking Kool-Aid won’t give you all the Vitamin C that you need, but it will help provide some.

Soda does not provide any Vitamin C or any other Vitamin in large amounts.

The ingredients found in some drinks can cause health-related problems. Some of the ingredients in soda, such as the flavoring and different kinds of acid, can cause tooth erosion and can contribute to other long-term health problems.

Tooth problems have been on the rise and sugar is a contributing factor to this.

This doesn’t mean that Kool-Aid is a healthy option.

Kool-Aid still has sugar and can lead to other health problems.

Kool-Aid is also not good for adults who want a soda substitution.

When considering what to drink, Kool-Aid can be a better choice over some but should not be chosen over water.

Water is still the best choice to drink for many reasons.

While Kool-Aid is not the perfect alternative to drinking soda, it can be considered a little bit better than soda.

But the sugar content found in Kool-Aid and the other ingredients can be unhealthy as well.

Moderation is key with whatever you decide to choose.

How Much Sugar is in a Pack of Kool-Aid? 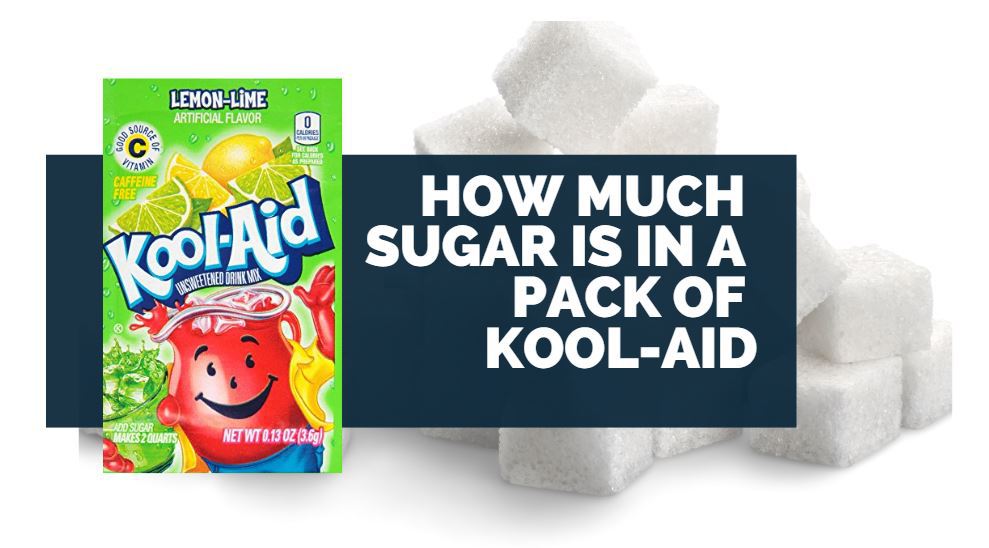 When considering options about what to drink, whether for yourself or a child, it is important to think about how much sugar is in the drinks we think taste so good.

Sugar is commonly found in drinks, from juices to sweet tea to fruit punch.

It can be a factor in what keeps us coming back for more.

Parents have been concerned about the health impact of sugar for many years.

It is thought to cause hyperactivity and is a known cause of tooth decay.

Tooth decay is on the rise due to people eating and drinking more sugar.

Sugar consumption is a growing concern for many parents.

How much sugar is in Kool-Aid though?

By making options with less sugar, Kool-Aid is following in the steps of many other companies.

Compared to other drinks, especially sugary drinks, Kool-Aid does have less sugar.

Many juices contain a lot of sugar.

Juices tend to have more grams of sugar than a comparable amount of soda.

This doesn’t mean that juices are bad for you or your child, it means that it has to be considered when choosing a drink.

Juices have been considered by some to be a healthier option than soda because of their vitamin content.

When sugar is compared though, between juices and many popular sodas, it’s clear that juice can cause a lot of problems as well.

It should not be considered healthy just because it’s made with fruit.

It is important to think about sugar in drinks because sugar is a contributing factor in tooth decay.

Sugar produces an acid that eats away at tooth enamel.

This kind of acid creates an environment for bacteria that causes tooth decay.

One of the most common problems with tooth decay is getting cavities.

Sugar can be found in many different drinks.

From coffees to teas to bottled flavored water, sugar sneaks into many different beverages.

It is important to be on the lookout for sugar in drinks and limit your sugar intake through drinks as much as possible.

Sugar content is important when considering a drink, especially for the health of your mouth.

Kool-Aid, even before making options with less sugar, still contained less sugar than many sodas offered on the market, and juice.

When considering the effects of sugary drinks on your mouth, Kool-Aid is a good option.

What is Kool-Aid Made Out of? 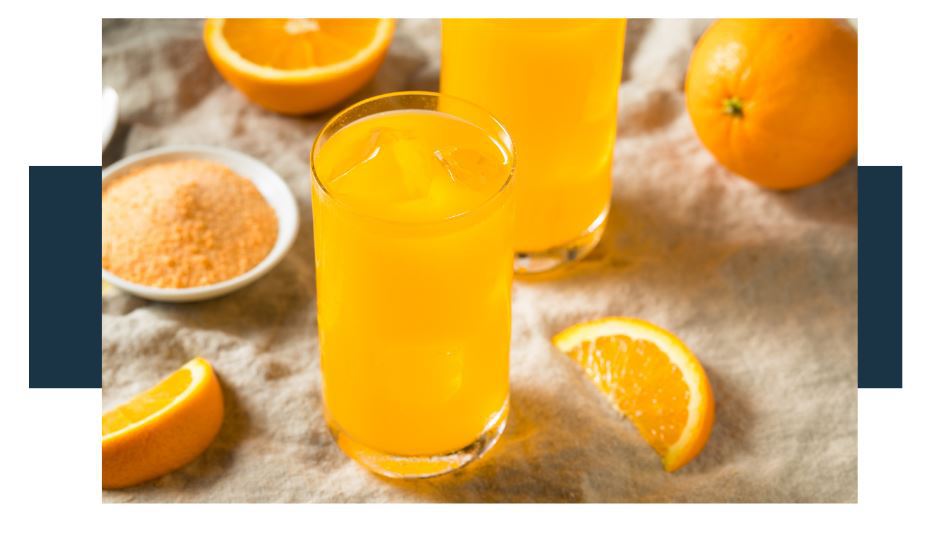 Kool-Aid comes made in little packets that you mix with water to make the delicious drink that we know and love.

It can be hard to think about ingredients when it comes pre-prepared in powder form.

The ingredients in Kool-Aid are more than sugar and it is important to know what is in Kool-Aid to make an informed choice about what to drink.

Kool-Aid can be made with artificial sweeteners like acesulfame potassium and sucralose.

These artificial sweeteners can prevent your body from telling when it’s full, leading to overeating.

They can also contain harmful dyes that have been purported as a contributor to getting cancer.

Even though Kool-Aid is made with water, it is important to remember that the powder adds to the water.

These additions are not good.

They can contain ingredients that will not have good long-term effects.

Kool-Aid does not serve as a replacement to water with all the additions that it creates.

It is possible to potentially limit the problems with these ingredients by watering down the powder even more.

It might not taste as good but the taste would be there without as much of the ingredients.

The ingredients would still be in the Kool-Aid though, and even small amounts of these ingredients can cause long-term problems.

The best way to stay hydrated while thinking about your health is to drink more water.

Water is considered to be the best option to stay healthy and not add additional calories or potentially harmful acids to your system.

It may not taste the best but is the best for you.

It may be easy to think that Kool-Aid is healthy because water is the main ingredient in making it, but the other ingredients cannot be forgotten as well.

The ingredients in Kool-Aid can lead to long-term health problems for adults and kids.

It is better, in the long run, to drink water over sugary drinks.

Kool-Aid can be considered a healthier option over other sugary drinks, but it is not a healthy drink in its won right.

You are comparing products that should be consumed as a treat and only consumed in moderation.

You want to avoid over drinking soda or even many juices, and be very clear that these are not a replacement for drinking water.