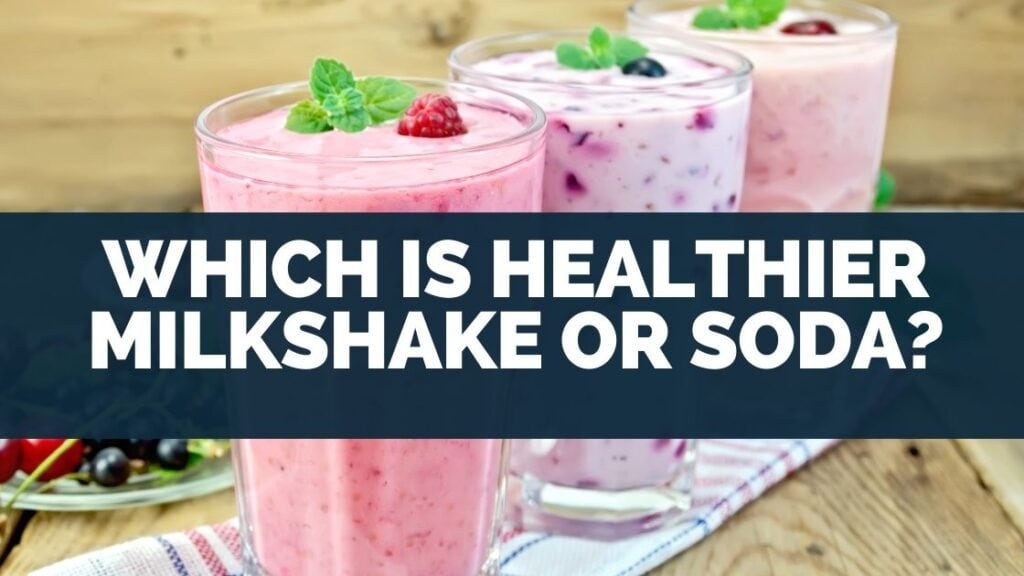 I love to drink both milkshakes and sodas, however, I was wondering whether one is healthier than the other.

I did some research into the nutritional contents of each, and here’s what I found.

As a whole, a milk shake is healthier than a soda, soft drink and diet sodas.

A milkshake contains grams of sugar, protein, and fat which the body uses as fuel, whereas a soda only contains sugar.

If like me, you love to drink chocolate milkshakes after a workout, or as a delicious drink in between meals.

But, I also like to drink soda from time to time.

In this article, I will explain everything there is to know about which is better for you: chocolate milk or soda.

Which is better for you chocolate milk or soda? 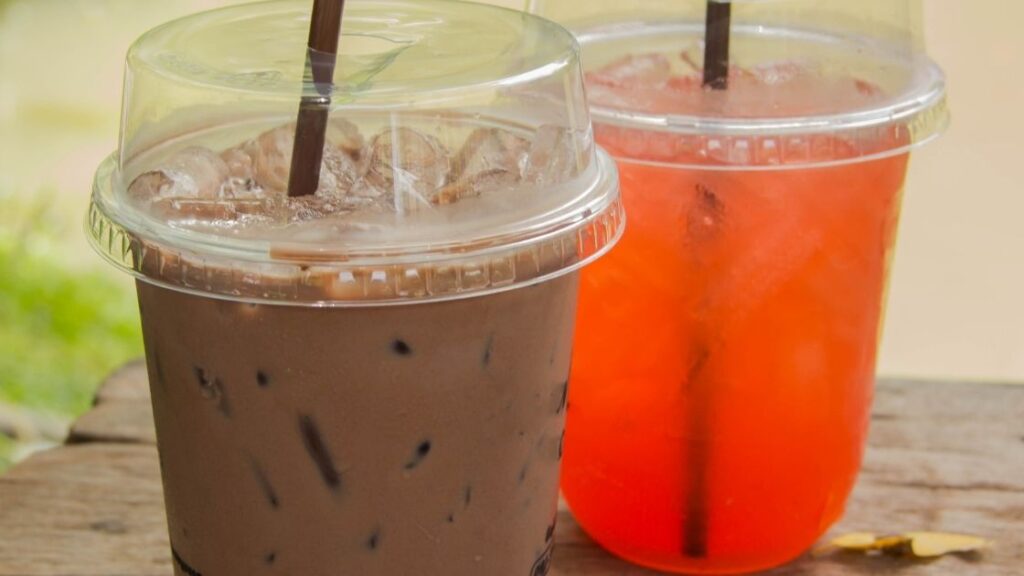 You can only drink so much water, soda, or chocolate milk in a day.

So, if you had to choose only chocolate milk or soda, which is better for you?

As a general rule, chocolate milk is better for you than soda.

Chocolate milk has both protein and fat which are important parts of a healthy diet.

Whereas, soda doesn’t contain any protein or fat.

Here’s a table that shows what I found:

The most popular chocolate milk in the USA is Nesquik Low Fat Chocolate Milk (source).

Coca Cola is the biggest seller of sodas, and its flagship soda is Coca Cola classic.

Therefore, I chose it to compare it to.

As you can see Coca Cola has almost triple the sugar of Nesquik, and Nesquik has a lot more protein, but only slightly more fat.

Which chocolate milk has the least sugar? 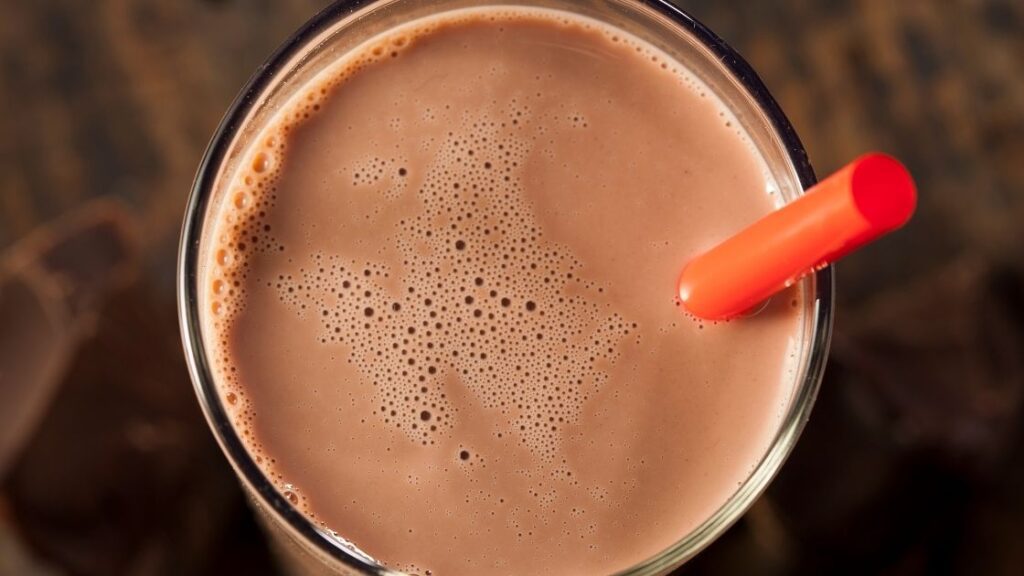 There is a range of different chocolate milks, and most of them are very delicious.

But, I was wondering which one has the least grams of sugar, and how that compares to how popular it is.

As a whole, Ovaltine Rich Chocolate Powder has the least amount of sugar.

However, Nesquik is a close second.

Nesquik is the most popular chocolate milk.

Whereas, Ovaltine is around 4th or 5th most popular.

Here’s a table showing how many grams of sugar each of the most popular brands of chocolate milk has sorted from least to most sugar.

In my opinion, if you’re choosing chocolate milk based on which one has the least grams of sugar, then you’re best to get Nesquik.

It is the most popular, and also has one of the lowest amounts of sugar.

A lot of people know Ovaltine for their malt drinks, but you may not have tried their chocolate powder.

And they can be worth trying as a really good low sugar option.

What is the healthiest brand of chocolate milk? 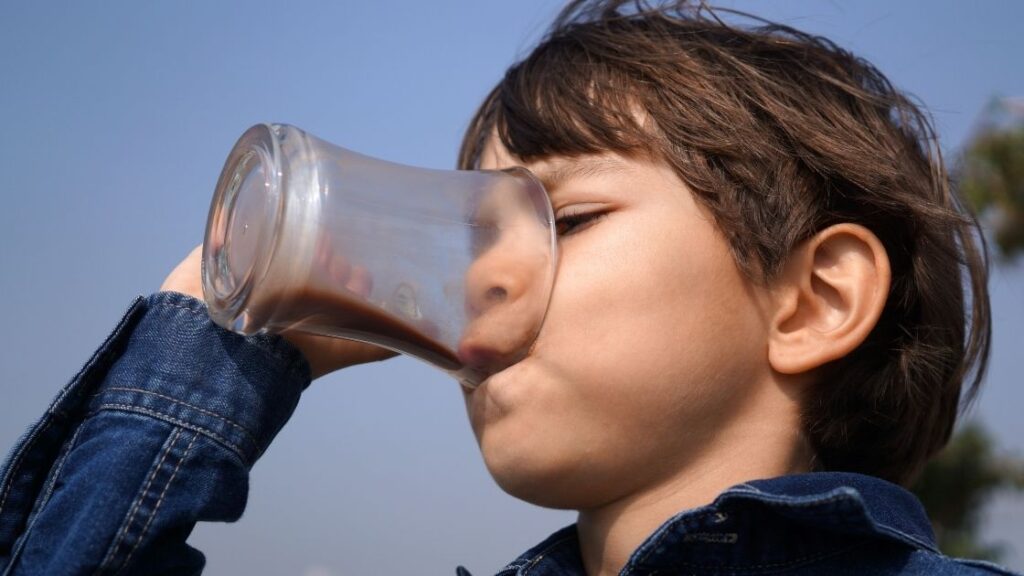 Now, each different chocolate milk has a different amount of sugar, fat, and protein.

So, I wanted to look at the most popular chocolate milk brands to see which is the healthiest.

Breakfast Essentials is the healthiest brand of chocolate milk.

It contains the best overall nutrient score in each of the categories.

But, each brand scores well in certain categories but not so well in others and there is therefore only a marginal difference in how healthy each brand is.

To understand more fully what I mean, I’ve put together some tables showing how each of the most popular chocolate milks rank based on their fat, grams of sugar, calorie, and protein content.

The chocolate milk with the best overall sugar content is Ovaltine.

But, the difference between Ovaltine and Nesquik is only a little bit.

But, taking a look at the next on the list – Breakfast Essentials – you can see it has around 50% more sugar than the top 2.

And Borden and Hiland have around 3 times the sugar as Nesquik and Ovaltine.

As well as, double that of Breakfast Essentials.

Sugar on its own isn’t inherently bad, but there is a recommended daily sugar intake.

And it’s generally considered to be around 25g a day for women and 37g for men.

If you consume food item that contains many teaspoons of sugar on daily basis, you may suffer from health problems.

The protein content for each of the most popular chocolate milk brands is very similar except for Ovaltine.

Therefore, how much protein chocolate milk has isn’t a major deciding factor for how healthy it is.

My recommendation if you are wanting to increase how much protein you consume, or want to get some of your protein from chocolate milk, you should go with the top 4, and avoid Ovaltine.

Fewer calories on their own aren’t necessarily more or less healthy.

However, some people are trying to lose fat by consuming fewer calories.

And for that reason, going with a lower calorie option can be the way to go.

In the table below you can clearly see that Ovaltine and Nesquik are far better options than the others.

However, if you’re trying to put on muscle mass then going with Breakfast Essentials is your best option because it contains the most calories.

As you can see Breakfast Essentials rates the best overall, however, it is actually the worst for the number of calories it has.

Therefore, it’s a good idea to look for what chocolate milks have the nutrients you’re looking for.

For example, the best chocolate milk for you depends on your weight loss or weight gain goals.

Whether you’re big on the paleo diet or a similar diet that recommends a high-fat diet, or want to get the lowest fat chocolate milk.

Here’s a table that shows how the most popular chocolate milks compare based on their grams of fat content.

Border and Hiland are very similar but then the rest are quite different in their grams of fat content.

The highest fat option for you paleo people is Borden or Hiland.

But, if you’re trying to consume less fat to lose weight, Ovaltine or Nesquik are your best options.

Although Breakfast Essentials is the best chocolate milk overall, you may decide that one of the other chocolate milks is better suited to your goals.

I, for example, want to consume more calories, protein, and fat so I would Borden, or Hiland.

But, if I was trying to lose weight I would drink Ovaltine – Rich Chocolate Powder.

It has the lowest calories, sugar, and grams of fat content. 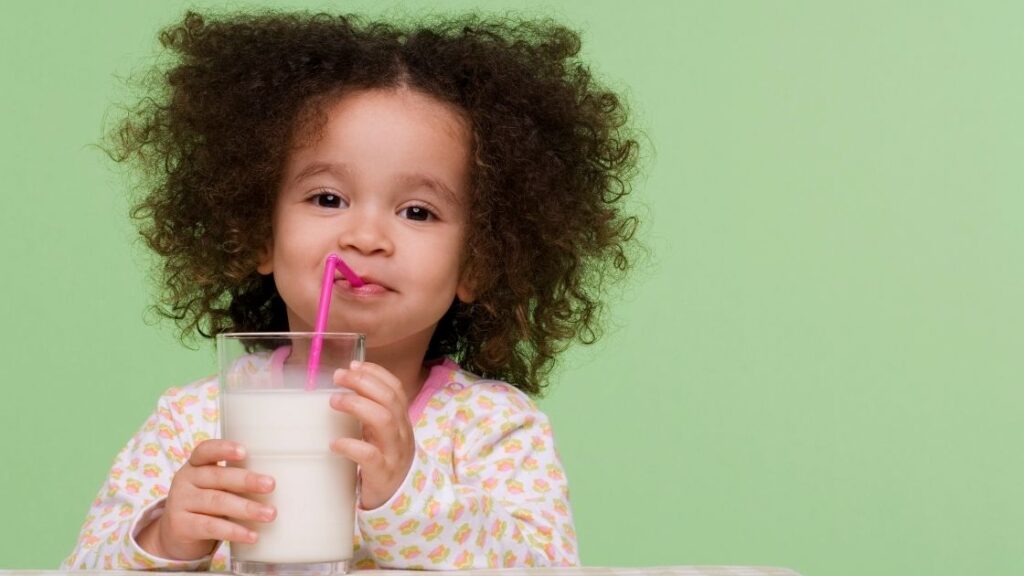 Oberweis is an Illinois based brand that processes their milk a lot less than milk you can typically find in store.

If you’ve never tried it you may be wondering if it tastes better.

Generally, most people who try Oberweis find it tastes better than other milk.

The reason is that they gently pasteurize their milk which keeps more of the original flavor of the milk.

They also don’t use any preservatives which alter the taste.

There’s a delicate balance between having milk that lasts a long time, and milk that tastes great.

If a milk tastes better than it’s because it hasn’t been as processed.

But, the trade off is that it has a shorter shelf life.

Interestingly, Oberweis typically delivered to stores within 36 hours of when the cows were milked.

Other types of milk such as Ultra High Temperature (UHT) processed milk has a much weaker flavor.

It’s more bland and isn’t as delicious or creamy.

However, it can last on the shelf for 6 to 8 months without being refrigerated.

However, it didn’t rate at all in the top 50 chocolate milks.

But, in my opinion, I think it’s because they don’t distribute their milk as widely.

Oberweis generally only distributes their milk in the Illinois area. And therefore, I think they aren’t as well known.