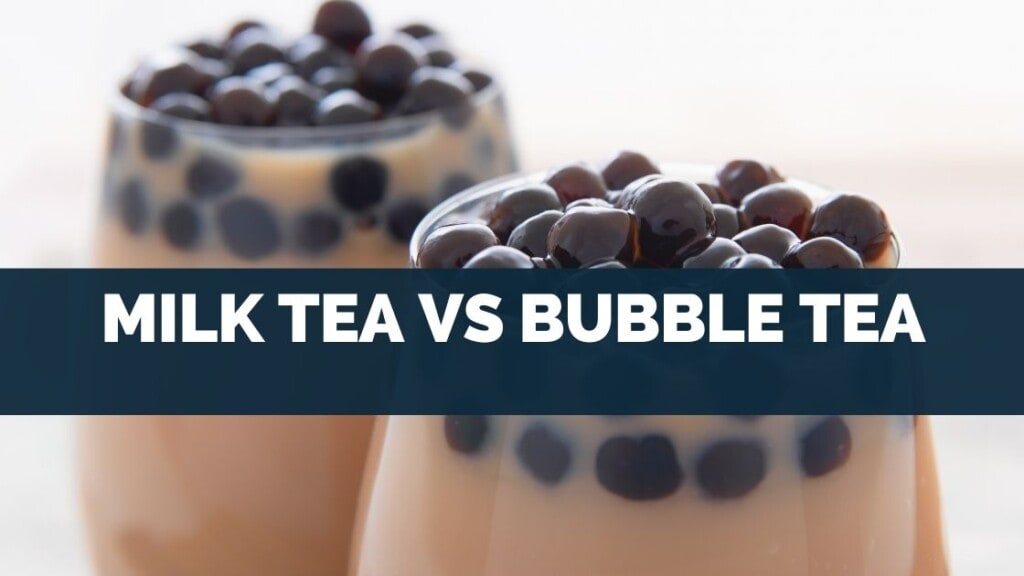 Tea has been used in ancient civilizations for thousands of years.

Over the last decades, it has evolved into something that would be almost unrecognizable to someone living a hundred years ago.

Simply by its name, you can assume that milk tea is what it is.

However, that traditional tea has long been shoved out of the way by more modern, popular varieties.

But for the most part, milk takes center stage and is often the only performer in milk tea.

Therefore, milk tea is essentially just a tea base, flavored with milk and at times, sweetener.

Bubble tea, on the other hand, is a whole different ballgame.

The explosive popularity of this weird and wonderful beverage has led to bubble tea shops springing up all over the globe.

From the east coast to the west coast of the United States, to all over Southeast Asia and even South America, boba shops have had a meteoric rise in success in recent years.

A bubble tea drink has many different names, such as:

Boba tea drinks are milk teas with different flavors and a unique, inventive slant to them, often incorporating toppings that are sucked through a fat straw.

The classic bubble tea uses tapioca or cassava root as the main ingredient in making the boba pearls, which is what gives the delicious drink its name.

While these chewy tapioca balls are the most common ingredient, other creative toppings include aloe vera, grass jelly, adzuki or red beans, and fresh fruit, as long as the topping has a chewy texture.

The starch in the root is formed into spheres and made into chewy tapioca pearls.

During the cooking process, tapioca is removed from the water when it is soft and edible.

After which, the balls are soaked in simple syrup for a prolonged period, usually until they need to be infused into the tea.

Tapioca is not particularly flavorful on its own, so the syrup is added to sweeten.

Often, fruit juice is often added to impart fruity flavors in addition to sugar syrup for that added sweetness or to make fruit tea.

Many tea flavors can be used, but the most common are:

As Asia has a large population of folks intolerant to lactose, many non-dairy alternatives to fresh milk are available in boba shops, such as: 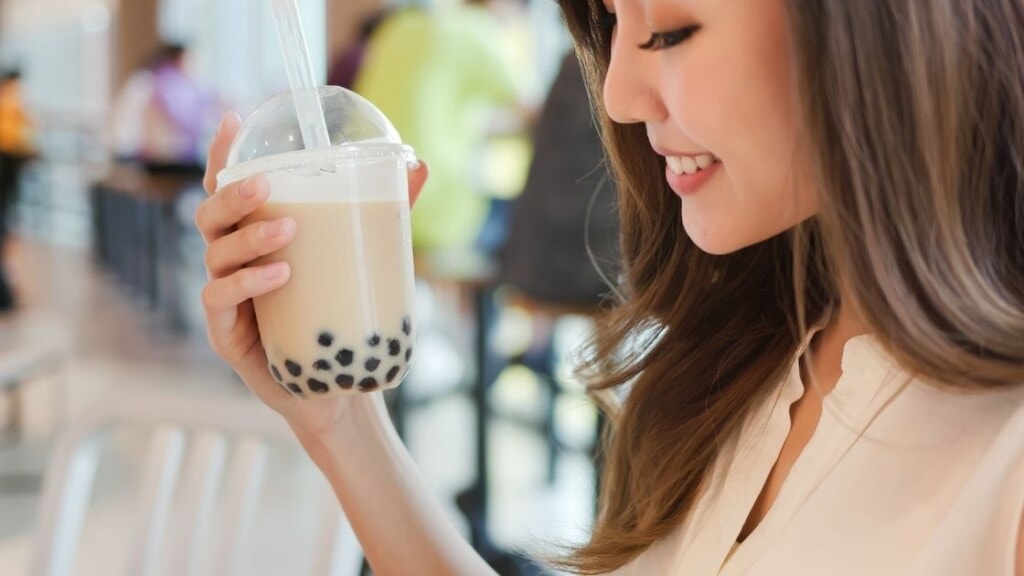 Most bubble teas are milk teas, but not all milk teas are bubble teas unless they have black large pearls made of a root vegetable like taro or tapioca.

While milk tea has been around for centuries, bubble tea is a popular drink that has only been gaining traction over the last decade.

While the classic bubble tea is basically black tapioca pearls thrown into a milk tea drink, there are numerous variations and different flavors.

Bubble tea is an interesting drink that has a chewy tapioca pearl at the bottom of the cup.

It was first created in Taiwan in the 1980s.

The drink was created as an iced tea with milk and sugar.

The tapioca pearls were added to the drink to add a chewy texture.

The popularity of bubble tea has grown in recent years and it can now be found in many countries around the world.

There are different variations of the drink, with different flavors and ingredients.

The tapioca pearls can also be served hot or cold.

Most milk teas don’t contain all the ingredients used in bubble tea.

Milk on its own is nutritious is rich in calcium, phosphorus, and protein.

It is also easier to make milk tea and it is cheaper.

The tea in milk tea and bubble tea are similar. Often, the following teas are used:

The milk used in both teas also can be tailored to suit your personal preferences and physical needs.

Lactose intolerance affects up to 68% of the world’s population.

Although lactose intolerance is rarely dangerous, it is an uncomfortable, often painful condition that can lead to a very bad day out if you have a bad reaction.

Dairy milk is also high in fat and calories, so think about substituting dairy with some plant-based alternatives like:

In Western culture, plant-based milk is also gaining traction as the awareness of their health benefits above dairy spreads, and veganism rises in popularity.

What bubble tea should I get for the first time? 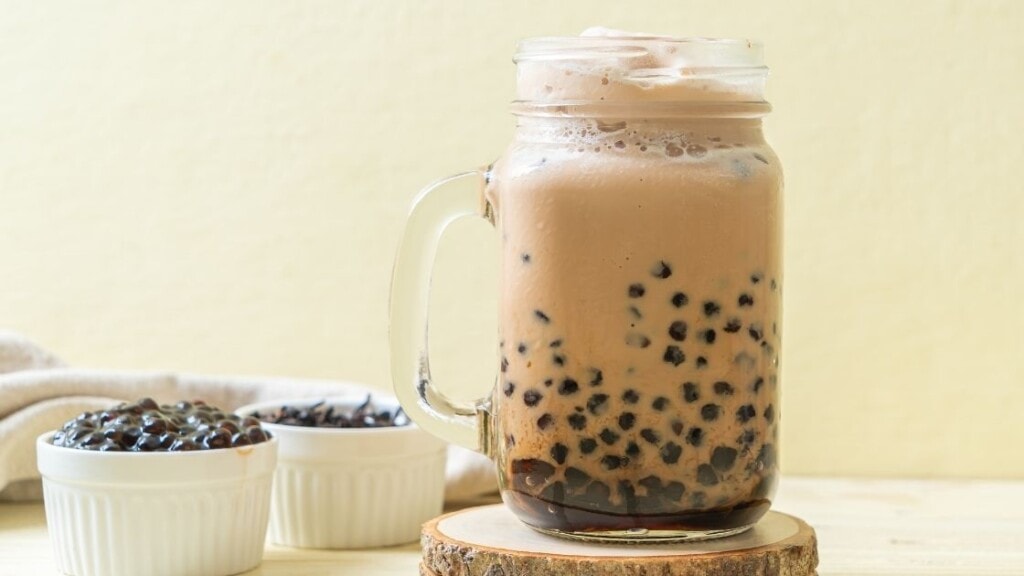 You’ll never forget your first! You can always start with classic bubble tea, or you can experiment with your favorite fruits.

Bubble tea can be confusing, what with the huge variety of flavors, toppings, milk, and fruits.

Have no fear, try them all! It’s all based on your personal preference of course – here are some of the more popular options.

Always a classic, taro is the root vegetable that gives this bubble tea its flavor.

To give the drink a creamy, rich flavor, taro root powder is added.

While taro isn’t commonly found in the US, you might be wondering what taro actually tastes like, without all that sugar?

Some claim that the flavor is reminiscent of vanilla. Others think it tastes like a sweet potato.

Regardless, taro has wormed its way into many a bubble tea recipe and is the most common topping around.

Mango is one of the sweetest tropical fruits and as a result, less sugar can be added.

Matcha bubble tea has a distinctive, earthy taste and can include other ingredients like almond milk, honey, and of course, boba pearls.

As the name suggests, the strawberry syrup is often added to the classic milk tea, and in the place of tapioca pearls, chunks of fresh strawberries might be used.

One of the more popular fruit flavors, strawberries are beloved the world over.

With a hint of boba pearls, black milk tea tastes like a sweet milky beverage with a nice balance.

The sweet boba flavor isn’t overpowering because the tea counteracts the sweetness and creaminess of the boba.

This is a good drink to start with if you’re not looking to be adventurous or if this is your first time having bubble tea.

This tea is the perfect choice for those who don’t care for toppings or fruit flavors in their beverages.

Compared to black tea, it has a sweet and creamy taste.

Certain bubble tea shops, however, use food coloring to produce an intense color similar to that of Ceylon Tea.

No mystery there! Almond milk is often used in the place of dairy milk, especially in lactose-intolerant Asia or health-conscious North America.

There is no doubt that this is one of the most popular bubble tea flavors.

In general, honeydew juice is mixed with a tea of some kind, usually green tea, but black tea is also sometimes used.

Vanilla, coconut, and almond are some of the flavors that people sometimes add.

To add creaminess and taste to the drink, you can add ice cream

.There are hints of green tea flavor in the drink that tastes almost like honeydew juice.

Do you chew or swallow bubble tea? 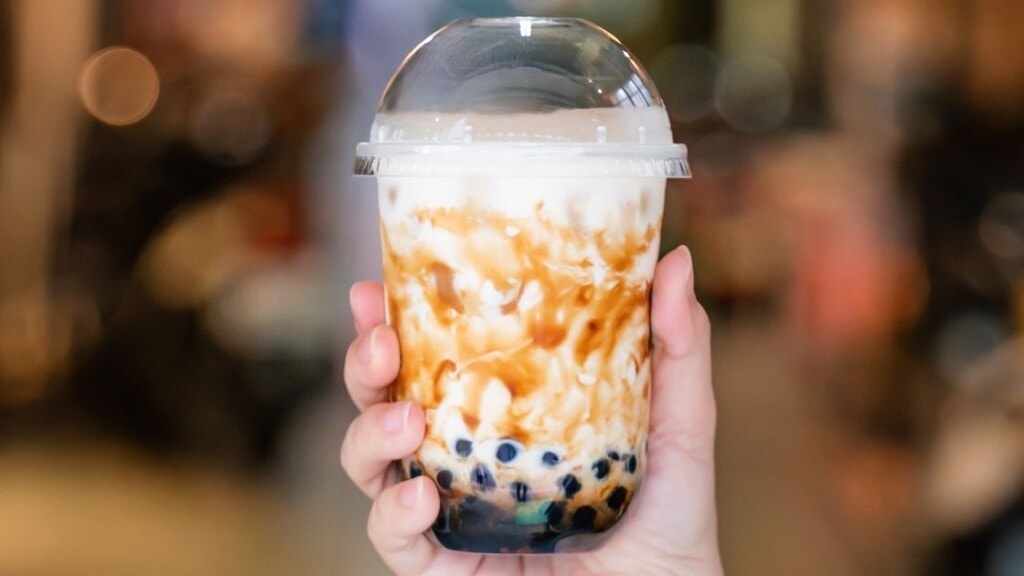 You must chew the tapioca in the bubble tea.

Tapioca is the primary ingredient in Boba.

Because tapioca is used as a filling for the pearls, the “bubbles” won’t dissolve as quickly as they would if the ingredients were not present.

It is always recommended to chew the bubbles when drinking bubble tea for the first time.

Be warned! The pearls are typically drunk through a fat straw and often get stuck in the straw.

If you suck too hard trying to get it out, the likelihood of it shooting down your throat is pretty high, making for a surprising, and sometimes unpleasant experience.

In China, a teenager was found to be carrying hundreds of undigested bubble tea pearls around in her stomach.

What happens if you swallow the boba? 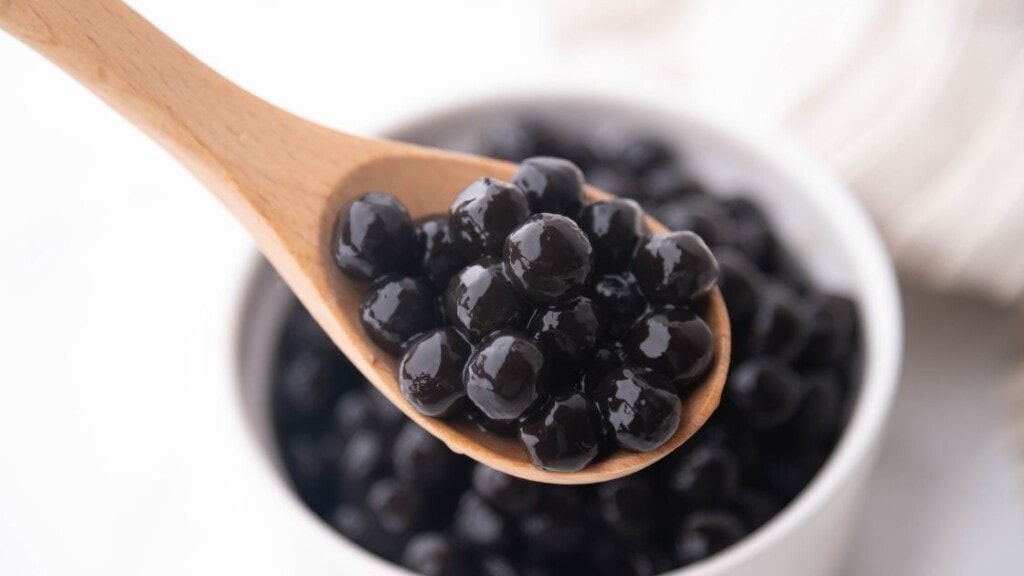 It can potentially be harmful to your body if you swallow the boba without properly chewing them.

Having a boba tea every once in a while can be relatively harmless, but if you consume this beverage frequently, it can certainly produce some adverse effects.

Side effects tend to happen when you swallow excessive amounts of boba instead of chewing it first.

As a general rule, if you are improperly chewing your food in general, your digestive system will not be able to break down the food properly, resulting in bloating, stomachaches, and ultimately slowing down the digestive process in general.

Additionally, you might end up choking possibly as a result of these balls – that’s not going to be a fun day!

Health professionals warn that bubble tea’s pearls, which are made from starch, can also include additives such as thickeners and preservatives, which have already been shown to be highly difficult to digest and break down.

Is it safe to swallow boba? 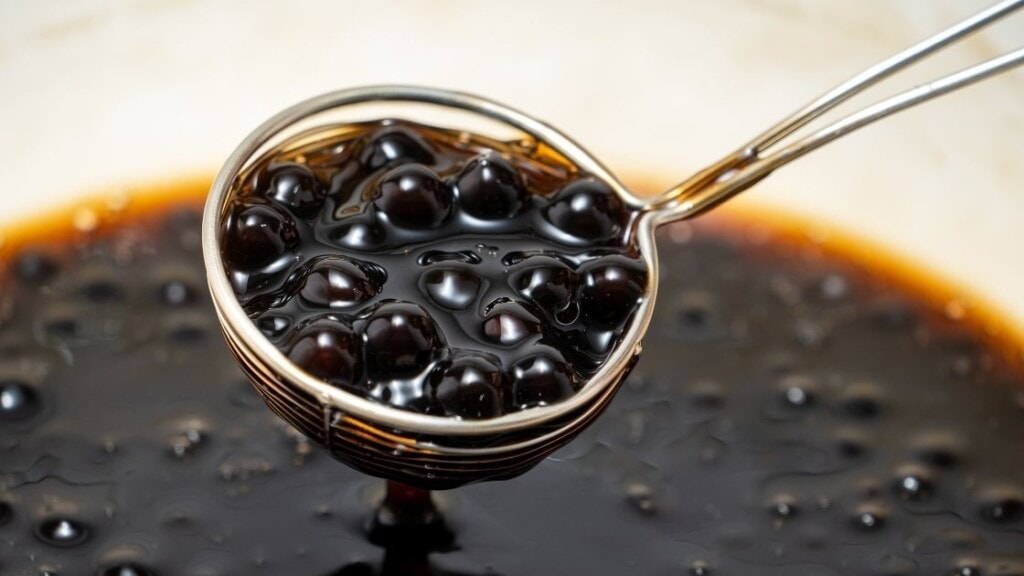 No, it is not safe to swallow boba.

It is prudent that you chew it thoroughly!

It is not a good idea to swallow boba pearls without chewing first because they have a hard texture that’s difficult for the body to digest without proper chewing.

You may be able to swallow them once or twice, but if you consistently do so, you will eventually have recurring stomach problems associated with indigestion, as a result of eating them whole.

In addition, chewing boba pearls is a great way to improve your oral health.

The act of chewing helps to remove plaque and food particles from your teeth and gums, promoting saliva production which helps you neutralize acids and protect your teeth from decay.

It also stimulates saliva production, which helps to neutralize acids and protect your teeth from decay.