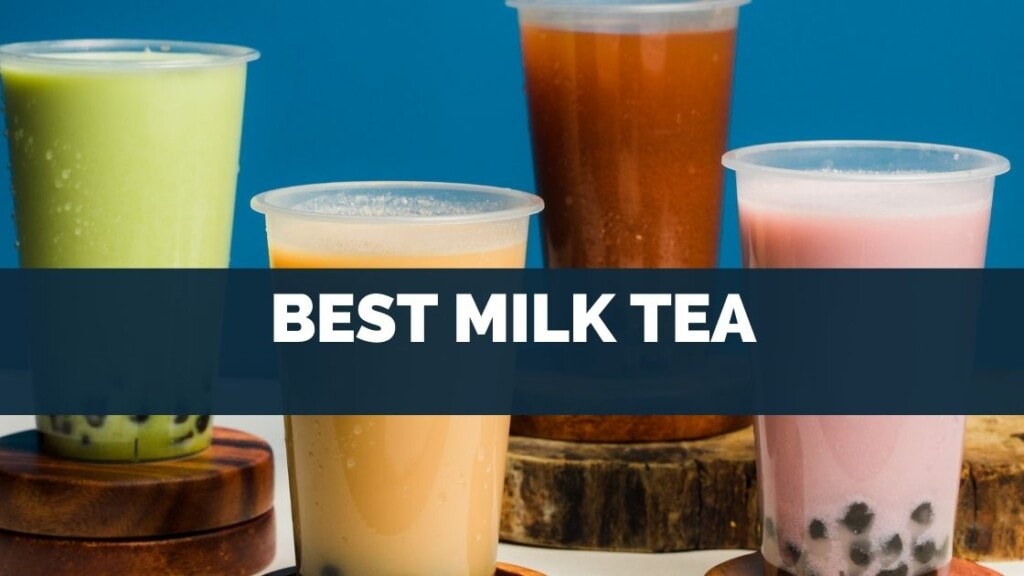 There are certain staple items that every foodie needs in their life.

These items may differ from person to person, but for me, one of those key items is milk tea.

I could never live without it!

As someone who loves milk tea more than anything, I’ve taste-tested a lot of different places to find the best ways to enjoy this delicious drink.

Boba shops all over the globe prefer strong, full-bodied teas with fruity flavors.

With an explosion of bubble tea places worldwide, you can experiment with different flavors and find your favorite.

Here are some other popular options for milk tea.

Alcoholic bubble teas are usually made with liquor such as gin, vodka, rum, or other kinds of alcohol in addition to real tea, milk, and/or fruits.

In fruit teas, purees or syrups of fruits are used.

This type of tea comes with black tapioca pearls or other inventive toppings like grass jelly or aloe vera.

Typical classic milk tea is a beverage made with any tea, and milk or non-dairy dreamer. Commonly used teas are:

The milk can be fresh, coconut, almond, rice, oat, and soy milk.

To sweeten, use condensed milk instead like Thai tea, or add white or brown sugar.

If you are considering making milk tea from different kinds of green teas, then Jasmine green tea, Gunpowder green tea, and Makaibari Estate green tea are the best choices.

If you are going to make boba tea, Assam black tea, Ceylon black tea or breakfast blends are the best black tea types to use. 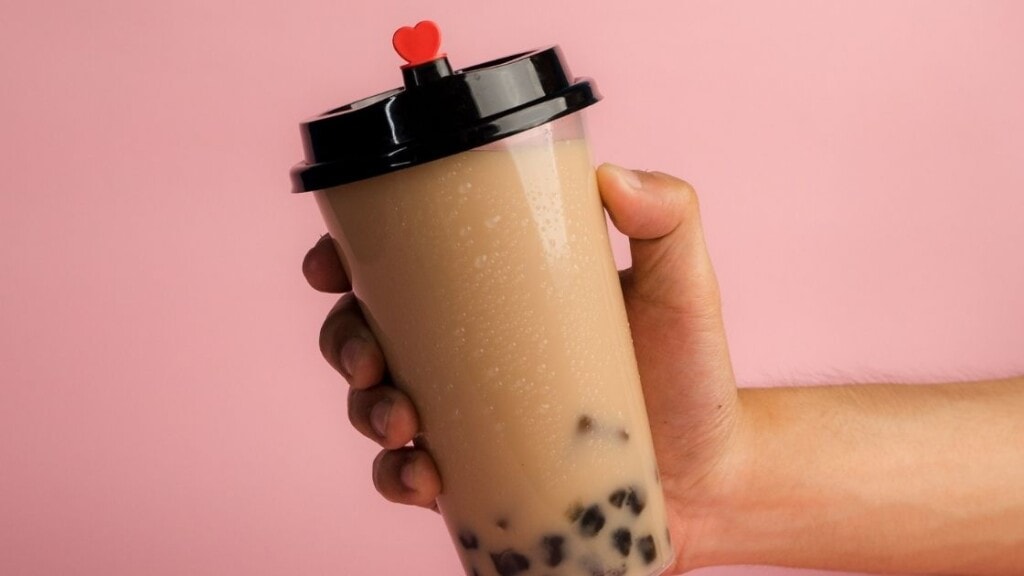 With companies jumping on the bandwagon and targeting the explosive popularity of milk tea, several manufacturers have started to deliver milk and bubble tea to the world.

Fanale Drinks, CoCo Fresh Tea & Juice, Fokus, Chatime, Bubble Tea Supply, and MilkTea are among some of the biggest and most popular.

In the beginning, it was a small shipping company in Hayward that now offers products and educational services across the nation.

Along with ingredients, the company provides services like logo design as well as custom printed cups.

Taiwan is the birthplace of Coco Fresh, with its first store opening in Taipei in 1997.

Coco Fresh now has more than 3,500 stores around the world.

The Fokus Corporation was founded in Taiwan in 2009 and supplies a wide range of bubble tea supplies, ingredients, and equipment to multiple bubble tea shops across more than 14 countries in APAC, EMEA, and North America.

The brand of bubble tea Chatime does not lay claim to being the oldest, but it is one of the best-known.

Founded in 2005 in Taiwan, it expanded to Australia in 2009 before spreading worldwide within the year.

Over 1,000 locations are now operating in over 100 countries, and the company offers a wide variety of drinks and customization options.

The brand was founded in Hawaii in 2001 to bring Taiwanese bubble tea to the United States, designing products specific to Americans and serving the needs of the market.

Customers can get recipes and support as well as ingredients, supplies, and equipment from this bubble tea company.

What toppings can you put in milk tea? 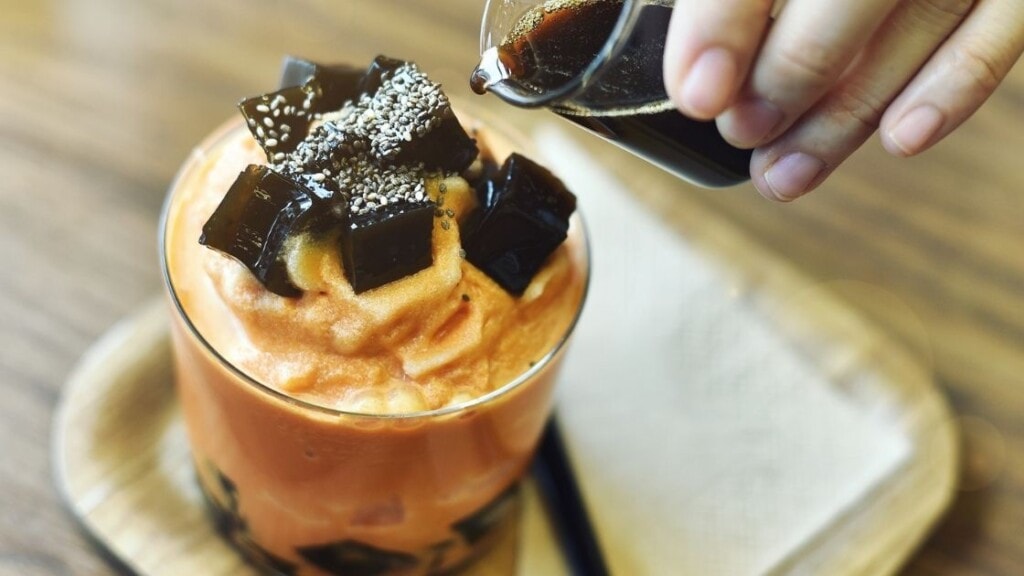 The explosion of milk tea shops across the globe has led to some truly inventive recipes with different flavors and toppings.

While the main ingredient remains tea, many other additions like boba pearls and fresh fruit make each tea drink interesting.

The fact that tapioca pearls rank high should not be a surprise.

These pearls are what make boba tea lovers go crazy about this sweet drink.

The pearls should give the sense that their mass is bouncy and soft, yet not at the expense of being slimy.

Pearls are available in many varieties, but tapioca pearls remain a classic.

Tapioca pearls can also be made into ‘brown sugar boba’, which is a delicious variation.

Lychee jelly is on this list because it’s one of the few toppings that can be made at home.

However, there is one disadvantage to lychee jelly.

Its fruity flavor is often incompatible with milk tea, so it does not rank as highly as other toppings.

The topping of pudding can be somewhat of a contentious issue.

The topping is usually a large chunk cut up into very small pieces with not much texture at all.

Compared to grass jelly, the size of the pudding is comparable to that of milk tea.

A pudding is an addition to milk tea without changing its taste but rather adding to the surprise element when a big piece of it is suddenly sucked up the straw from the bottom of the cup.

The slight sweetness of this pudding as well as its richness from the eggs place it among our ranking.

Not overpowering but subtle, red beans are a healthy, delicious addition to many desserts and drinks all over the world.

Harvested from the aloe vera plant, drinking aloe vera has numerous health benefits like acting as a natural detoxifier, meaning that it helps the body get rid of toxins.

It also helps to improve digestion and can reduce inflammation in the body.

Grass jelly is a type of tea drink that is made with Chinese herbs.

The drink is usually black or green in color and is made with a variety of ingredients that can include things like jasmine tea, lily petals, and chrysanthemum flowers.

Some people also like to add milk and sugar to their grass jelly drinks for a sweet and refreshing taste.

Which country makes the best bubble tea is the topic of hot debate, especially between some Asian countries like Taiwan, Japan, and Singapore. Of course, the birthplace of bubble tea, Taiwan, has made bubble tea part of their national culture and a symbol of national pride.

The bubble tea of Taiwan has become more than just a beverage; it has become a symbol of Taiwan’s culture and food history.

Towards the end of 2020, Taiwan’s government recognized April 30 as National Bubble Tea Day, with the image of bubble tea proposed as an alternative passport cover design.

There is no doubt that bubble tea has become synonymous with Taiwan, but is also considered an important symbol of Taiwan’s national identity, both locally and internationally.

Despite its entrance into Japanese markets in the late 1990s, bubble tea failed to make a lasting impression.

The bubble tea trend finally made its way to Japan in the 2010s.

The popularity of bubble tea grew as more and more shops in cities began to open, including those from Taiwan, Korea, and China, as well as local brands.

Bubble tea is still one of the most popular social trends today.

This is particularly true among teenagers.

In fact, bubble tea is so common among teenagers that they have invented a slang term for it: tapiru.

People were obsessed with tapioca tea to the point where they built a tapioca theme park in Harajuku, Tokyo in 2019 as a result of the popularity of tapioca tea in Japan.

Bubble tea is loved by many people in Singapore.

The beverage was first sold in Singapore in 1992 and became notorious in 2001 after becoming wildly popular among the young.

Bubble tea lost its popularity in Singapore by 2003, when most of the bubble tea shops closed down.

Taiwanese chains such as Koi and Gong Cha only spurred short-term rises in bubble tea consumption in Singapore in 2007 and 2009.

With new brands such as The Alley and Tiger Sugar entering the market in 2018, the interest in bubble tea in Singapore once again rose at an unprecedented speed.

Where is bubble tea the most popular?

Asia leads the charge in the bubble tea market, but the trend is starting to catch on in the US in areas like Southern California.

The most popular places for bubble tea are Taiwan, the Philippines, Thailand, Indonesia, Malaysia, and Vietnam.

Among consumers, the Thais consume the most bubble tea per month, with an average of six servings per person, followed by the Filipinos with five servings.

Southeast Asian countries such as Indonesia, Vietnam, and Malaysia consume three cups per person per month.

Customers are encouraged to take aesthetic pictures of their quirky, unique drinks in bubble tea shops, resulting in a craze.

In contrast to other trends, bubble tea has sustained its popularity rather than fading away, as is the case with most trends.

The tea industry began to experiment with different flavors, toppings, and milk instead of just sticking to tea.

It was also more widely marketed once it gained mainstream popularity in the US.

Marketing was geared towards avid coffee drinkers and young adults, with constant innovations including bubble ice cream and new flavors.

Despite being more targeted than fads normally are, the trend has maintained its popularity and excitement for much longer than they usually do, and it is predicted to continue to grow for quite some time.