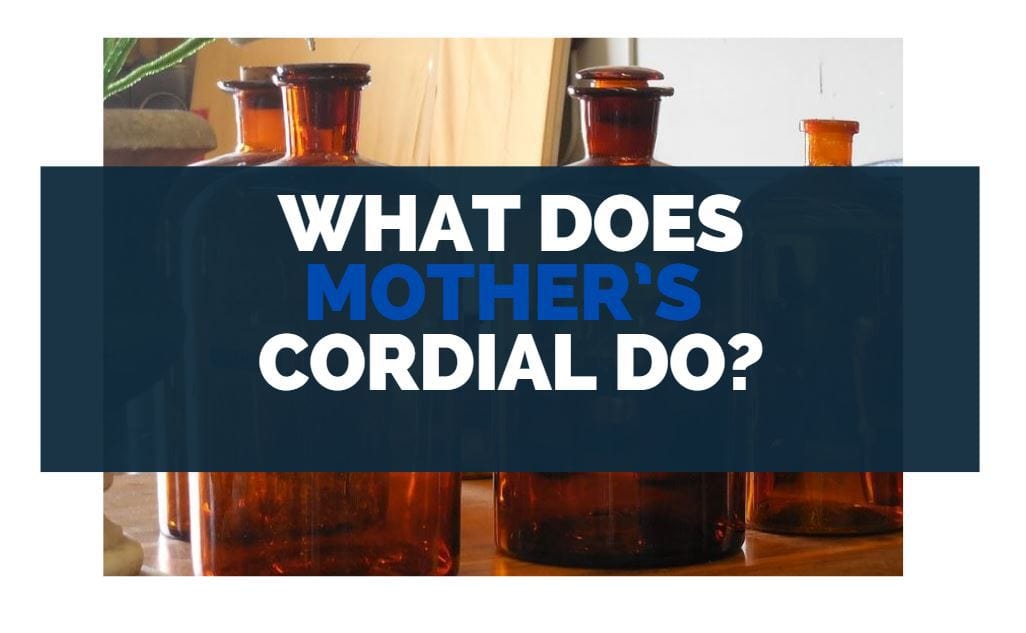 Mother’s Cordial is an herbal formula designed to be taken by expecting mothers in the final weeks of pregnancy.

Some variations of the cordial can be taken at any point pre-, during, or post-pregnancy and are generally intended to strengthen the immune system and combat anxiety.

What does Mother’s Cordial do and what is it intended for?

Traditional Mother’s Cordial is intended for use during the final weeks of pregnancy to ease cramps and support healthy and normal uterine function.

There are slight variations available for Mother’s Cordial, so read on to learn more about this herbal supplement and how you could make your own at home.

Midwives and health care practitioners have used the classic formula in Mother’s Cordial for over a century to help expecting mothers in their final weeks of pregnancy, typically starting at week 36.

Each component of the cordial formula is intended to treat a specific aspect of late-stage pregnancy.

Partridge berry is used in Mother’s Cordial to strengthen the uterus and prepare it for the hard work of childbirth.

Blue cohosh is often used to induce labor, which is why this formula should not be taken in early or mid-term pregnancy. It may help relieve false labor cramps and aid the uterus in stronger contractions during the actual labor.

Cramp bark, as the name suggests, has been traditionally used to help relieve cramps and ease the pain.

False unicorn is an herb that has traditionally had many uses for supporting female reproductive health, and in Mother’s Cordial, it is meant to help support the uterus during childbirth.

Can I take Mother’s Cordial when I’m not pregnant?

Traditional Mother’s Cordial should only be taken by an expecting mother in the final few weeks of her pregnancy and at no other time, according to the precautions listed by the creators of this formula.

There are, however, a few variations of Mother’s Cordial available that can be taken at any time.

Some Mother’s Cordial syrups support fertility and prepare the uterus for pregnancy in women who are trying to get pregnant. It is meant to be taken two to three times per day with some water to dilute it.

This variation of Mother’s Cordial is made with a blend of herbs traditionally used to nourish and support the female reproductive system.

It can also be taken by women who are not trying to get pregnant, but who may benefit from the nutrients offered by its ingredients.

Raspberry leaf, the primary ingredient in this blend, is rich in vitamins A, B, C, and E, as well as minerals, are known to support women’s health, such as iron, magnesium, calcium, and potassium.

The combination of nutrients in raspberry leaf helps support the uterine and pelvic muscles to aid in childbirth, and it may help mothers have shorter and easier labors.

For women who are not pregnant, raspberry leaf still offers hormonal balancing benefits and may help relieve symptoms of PMS and menopause.

Vitex berry is commonly used to help relieve symptoms of PMS, such as painful cramps and breast tenderness.

Wild yam root has long been used as an herbal treatment for hormonal imbalances and treating symptoms of menstruation and menopause, infertility, and low sex drive.

Another variation on Mother’s Cordial can be taken at any point pre- or most-pregnancy. It can even be taken by fathers.

Its primary function is to relieve anxiety, boost your mood, and bolster the immune system to keep you happy, healthy, and functional in life and parenthood.

Its ingredients are less geared to offer specific pregnancy and female reproductive health benefits. This cordial is more focused on general health and relaxation.

Passionflower has been known to calm the nervous system and help you sleep. It can also help relieve restlessness caused by some menstrual symptoms.

Lemon balm can help you digest easier and even acts as a mild sedative. It may help alleviate suffering from depression or some sleeping disorders and could calm irritability.

Withania can strengthen the immune system to help you better fight off viruses and bacteria.

There is not a lot of clinical evidence to support the medical uses of the ingredients in traditional Mother’s Cordial.

In fact, some ingredients may not be safe for pregnant mothers to take.

It is important to consult your healthcare professional and find trusted sources to decide what is best for the health of you and your baby.

If you do decide to use Mother’s Cordial, be sure to use only as directed, taking ½ to 1 teaspoon of the formula diluted in water up to three times a day.

If you wish to make a Mother’s Cordial at home, it isn’t very easy to find a recipe ready to use out there.

However, if you can get the balance of ingredients right, you can try making a cordial by boiling your choice of a blend of the above ingredients in a pan with honey, spring water, and organic alcohol.

After boiling the mixture down to a syrup, you can strain your creation into a sterilized bottle and use it for yourself.

Although there is not a lot of scientific evidence to support the medicinal uses of Mother’s Cordial and its ingredients, many mothers still use this traditional herbal remedy to aid them with fertility, pregnancy, childbirth, and general female reproductive health.

Consult sources you trust to determine if Mother’s Cordial is right for you.