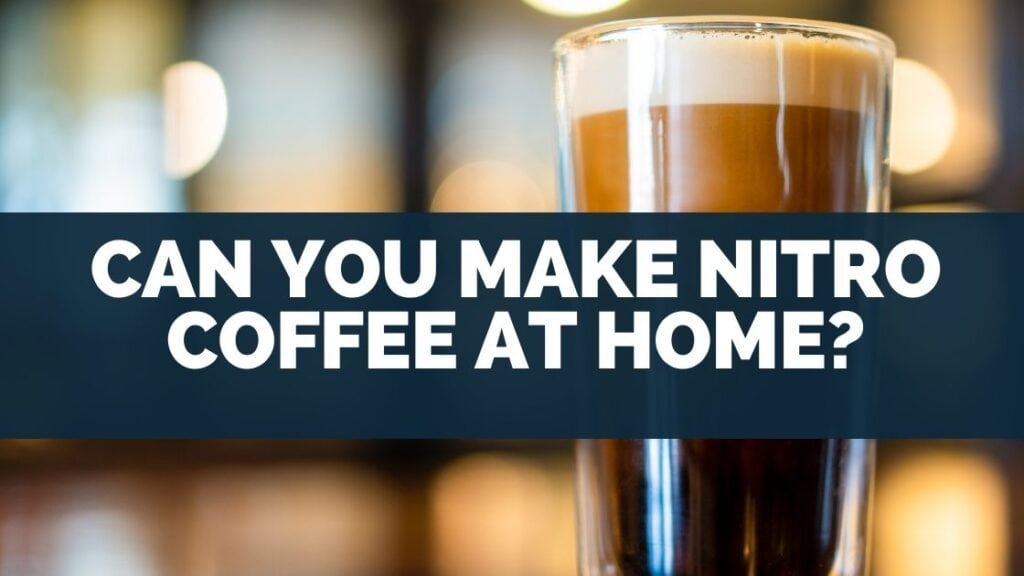 I’ve been looking at new and interesting styles of coffee and came across nitro coffee.

I wondered whether I can make it home. So, I did some research, and here’s what I found.

As a whole, you can make nitro coffee at home.

To do so you need a cream whipper also commonly called a whipping siphon.

It is a metal canister that uses nitrogen cartridges to pump N2 gas into the coffee.

It is simple and fairly inexpensive to make at home.

In this article, I’ll explain everything you need to know about Nitro coffee, how it compares to other coffee, how it’s made exactly, and whether it has more caffeine than hot brewed coffee. 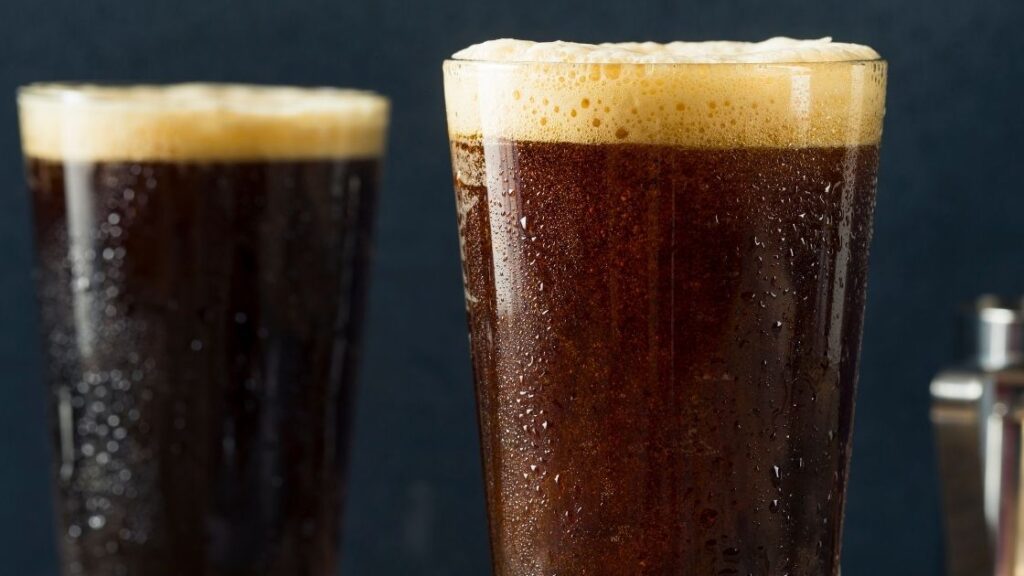 Hot coffee brewed in the standard way is so good that there doesn’t seem to be any reason to change it.

But, those who have tried cold brew coffee will know that it tastes better.

The one drawback is that it’s cold. However, you can heat it up in an electric kettle or saucepan.

I wanted to know what the major difference is between nitro coffee and cold brew. Here’s what it is…

As a general rule, nitro coffee is nicer to drink that cold brew, and has a better flavor.

The nitrogen bubbles give it a very creamy texture, that psychologically makes you feel like it tastes sweet and creamy when there isn’t in fact any cream of sugar.

It is a very unique way to drink coffee, that you should try.

Cold-brew is different from nitro coffee because it doesn’t have nitrogen gas in it.

Drinks that are carbonated like sodas also have gas in them.

But, instead of nitrogen gas, they use CO2 gas.

Nitro coffee though has a soft cream texture, rather than a sharp and tangy bite like soda has.

Nitro coffee is typically made from cold, cold brew coffee.

Yes, cold brew coffee that is cold! But, there are rare cafes that will serve hot brewed nitro coffee.

I always prefer hot coffee even if it’s a hot day.

But, you may prefer to drink it cold.

Cold brew coffee is made differently from the standard way of making coffee.

But, the process is very similar and easy.

How cold brew is made vs nitro coffee

The easiest and most tried and true method to make cold brew coffee is to use a French Press.

You use 1 part ground coffee to 1 part water and leave it overnight in the fridge.

This will make a cold brew coffee concentrate.

You then press the French press as you would when making a normal pot of coffee.

You can add a small amount of the cold brew concentrate into a cup and pour over either boiling or cold water.

And enjoy your cold brew coffee hot or cold.

Nitro coffee is made by pouring some cold brew coffee in a cream whipper/whipping siphon and then filling it with nitrogen gas.

A cream whipper has a small part that you can unscrew.

And inside that, you put a small nitrogen canister.

Here’s a quick video showing how to make nitro coffee at home using a cream whipper: 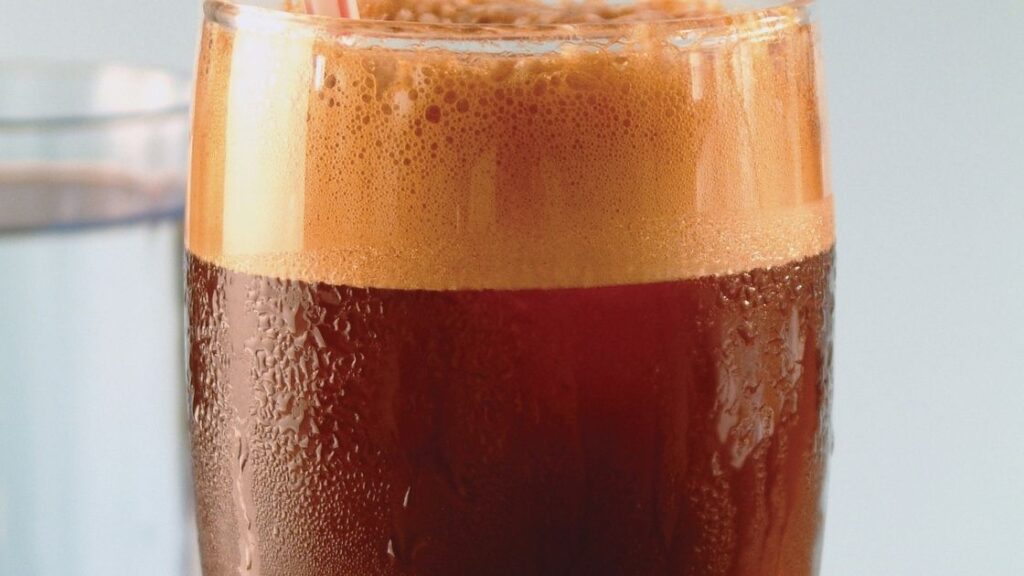 If you’ve never tried nitro cold brew before you may be wondering how it tastes compared to regular coffee.

As a whole, regular coffee is 10% stronger than nitro cold brew.

And one can be stronger than the other depending on how much ground coffee you use to make it.

But, the strength of the coffee overall comes from how much coffee grinds you use.

And during the brewing process using boiling water or cold water doesn’t affect how strong the coffee is.

The main difference is the flavors that come through.

Cold brew coffee, which is what nitro coffee is made out of, is, in general, more flavorful and better-tasting than regular coffee.

Here’s a table that shows a side by side comparison of two coffees from Starbucks, one is cold brew the other is regular coffee:

As you may know, an americano is just hot water and coffee with nothing else.

As you can see, the cold brew has slightly less caffeine then the americano.

The caffeine content makes it taste a lot stronger and gives you more energy and makes you more alert.

How Much Caffeine Does Nitro Cold Brew Have? 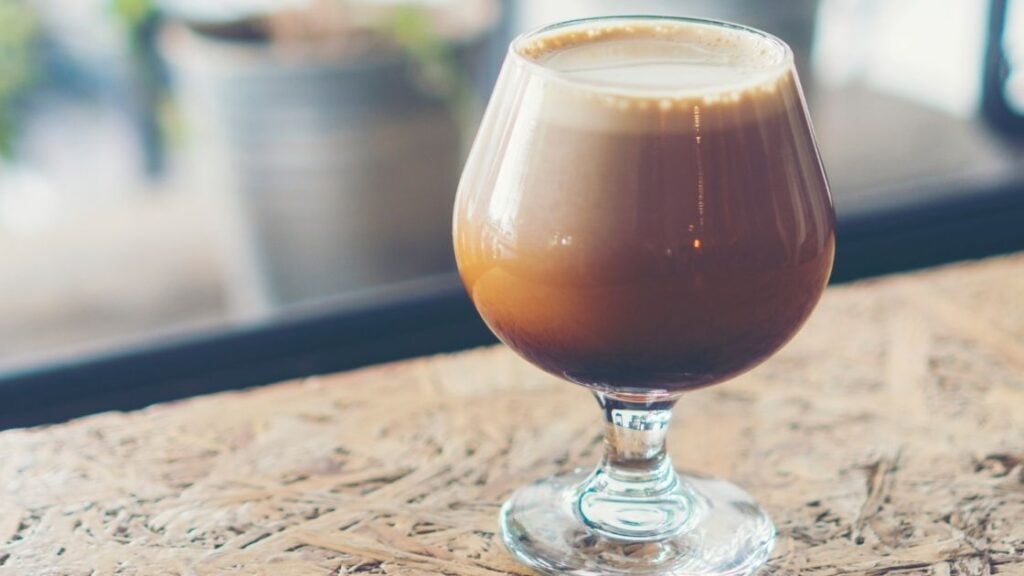 There is a recommended amount of caffeine that you should drink in a day, but how much caffeine is there in a nitro cold brew?

Cold-brew coffee ranges in caffeine content between around 150mg and 360mg per 17 fl. oz., depending on the type of coffee used.

Certain coffee beans have more caffeine than others.

As I mentioned above, cold brew coffee has around 10% less caffeine than hot brewed coffee.

Here’s a table that shows the caffeine content of some different coffee roasts and how it differs:

I chose Starbucks as they are a very popular coffee.

There’s a bit of range in how much caffeine each different coffee that Starbucks sells.

Even when you set aside the difference between a hot brew and a nitro cold brew. 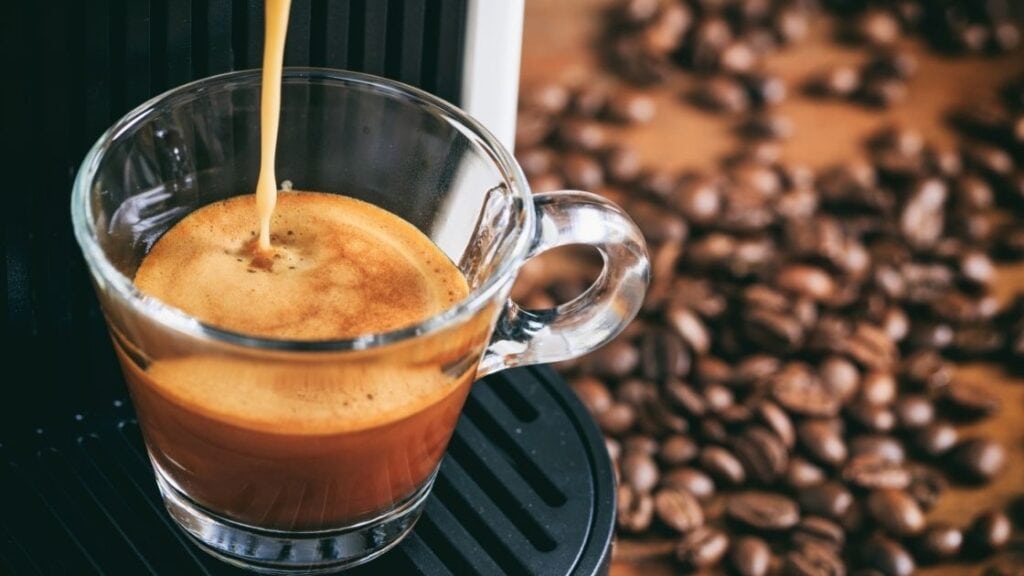 Drinking a shot of espresso Italian style, or with added boiling water to make a full glass is a great way to enjoy coffee.

But, if you had to compare how strong it is compared to nitro cold brew, which one is the strongest…

An espresso made with hot water has a different flavor and is more bitter tasting than a cold brew.

Because of that, espresso can taste a lot stronger than nitro cold brew, even though it’s only 10% stronger.

Cold brew has a more delicate and complex flavor profile than espresso, but when it’s made into nitro cold brew by adding N2 gas it changes its flavor again.

Making it creamy, and sweet.

Therefore, using cold brew coffee rather than iced coffee to make nitro coffee tends to have a much nicer flavor.

Because it takes so long to make cold brew coffee you would think that more caffeine would be extracted from the coffee beans, but in fact it simply extracts the caffeine slower.

If you don’t leave cold brew coffee to sit for around 12 hours the end result is a much weaker coffee.

And in my opinion, likely doesn’t have as much caffeine.

However, If you want to make a weaker cold brew coffee though, I would recommend experimenting with the amount of coffee you use to make it.

Rather than leaving it to brew for a shorter amount of time.

That way you’ll use fewer coffee grounds to make it.

Some people have reported that if they leave their cold brew coffee to sit for longer than 48 hours it starts to develop a sour taste that isn’t very nice to drink.

Others say that if you leave it for only 2 hours it isn’t strong enough.

At the end of the day, you should experiment with how many coffee grounds you use, and how long you leave it to brew until you find what flavor you like most.

Most people have reported that the best way to drink it is by making a concentrate and adding boiling water.

Or, making a standard strength cold brew and heating it up in a saucepan.

Do you put milk in nitro coffee? 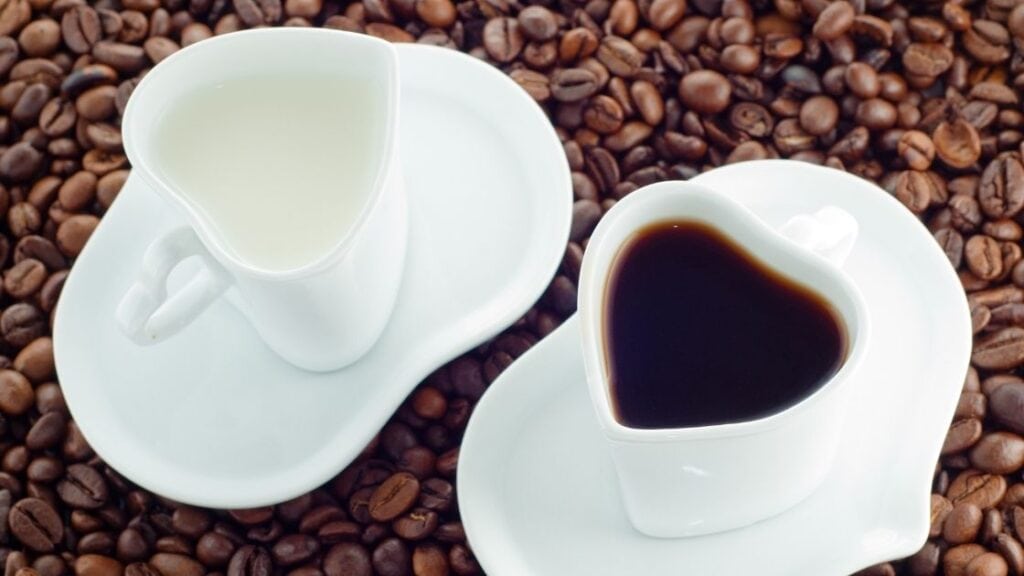 I generally prefer milk or cream in my coffee so I was interested in whether you can put milk in nitro coffee.

Here’s what I found..

Generally, you can add milk or cream to nitro coffee.

Although nitro coffee has a smooth creamy texture from the nitrogen gas, you can still add milk, cream or sugar to taste.

Most nitro coffee sold at a cafe is served cold, without milk, cream, or sugar.

At the end of the day, you can add anything you like to nitro coffee.

For example, they will add some lemon rind.

But, you can also be enjoyed plain on its own, cold and without anything added to it.