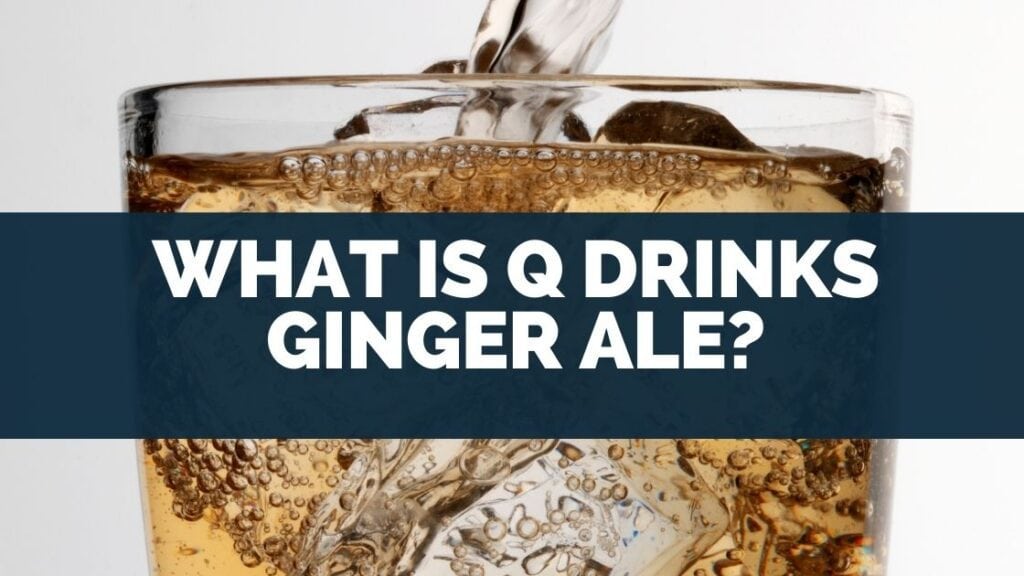 I’ve been trying a tonne of different sodas and came across Q Drinks Ginger Ale.

I wondered what it is and how it tastes. So, I decided to try it and here’s what I found.

As a whole, Q drink ginger is not as sweet as other ginger ales on the market, however, it still tastes nice.

It’s made by Q Mixers who make a range of sodas for use as a mixer with alcoholic drinks.

Q Mixers also make a ginger beer that tastes slightly different, and both contain a mixture of very interesting and flavorful ingredients.

Whether you’re interested in what’s in Q Ginger Ale, the differences between Q Ginger Beer and Q Ginger Ale, this article will explain everything you need to know about Q Drinks ginger-flavored sodas. 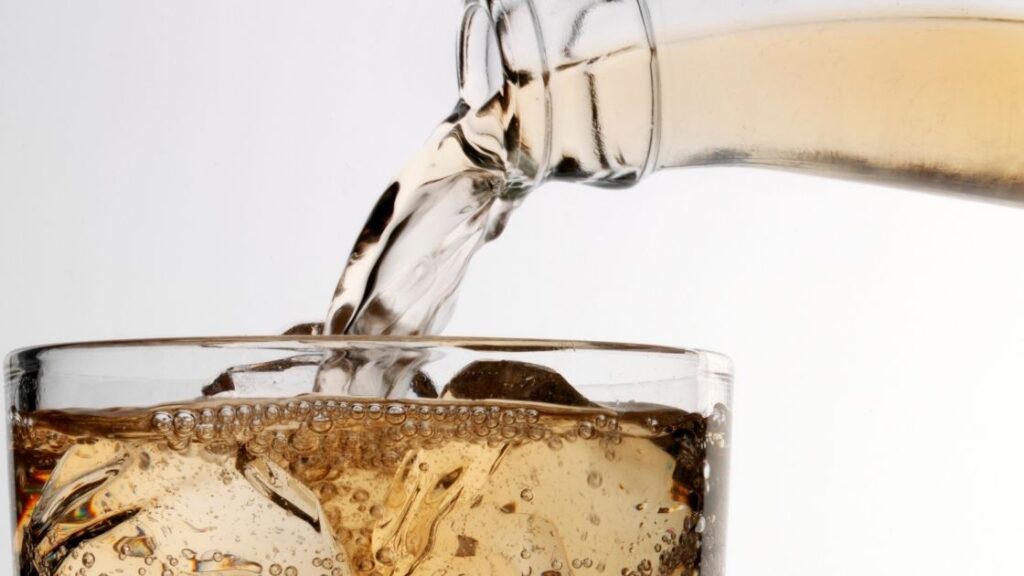 Q drinks are very unique and don’t come across as an everyday soda that you drink all the time.

Their packaging is very expensive looking, and so I wondered what was in this luxury drink…

The ingredients in Q Spectacular Ginger Ale are:

The interesting thing about the ingredients is that they don’t contain any artificial colors or flavors.

Most popular sodas such as Coca Cola and Pepsi use caramel color and high fructose corn syrup as a sweetener. Instead Q Spectacular uses agave.

Agave is a small shrub that is native to the Americas.

To make the sweetener that Q Spectacular uses the thick and fleshy leaves are crushed, and the juice/gel is strained to produce a syrup.

Above is a table that shows the difference in sugar and calories between Q Ginger Ale and Coca Cola.

You can see that Q Ginger Ale has around 10% as much sugar as is found in Coca Cola.

And about 10% of the calories.

Therefore, if you’re trying to consume fewer calories to lose weight then Q Ginger Ale is a better option rather than Coca Cola classic.

Almost every other soda on the market, though, has slightly more sugar than that found in Q Ginger Ale.

And on average they have 40 calories compared to the 30 calories found in Q Ginger Ale.

They also have around 10g of sugar compared to the 7g found in Q Ginger Ale.

That would account for the fact that most people that taste Q Ginger Ale find it doesn’t taste as sweet as other sodas. 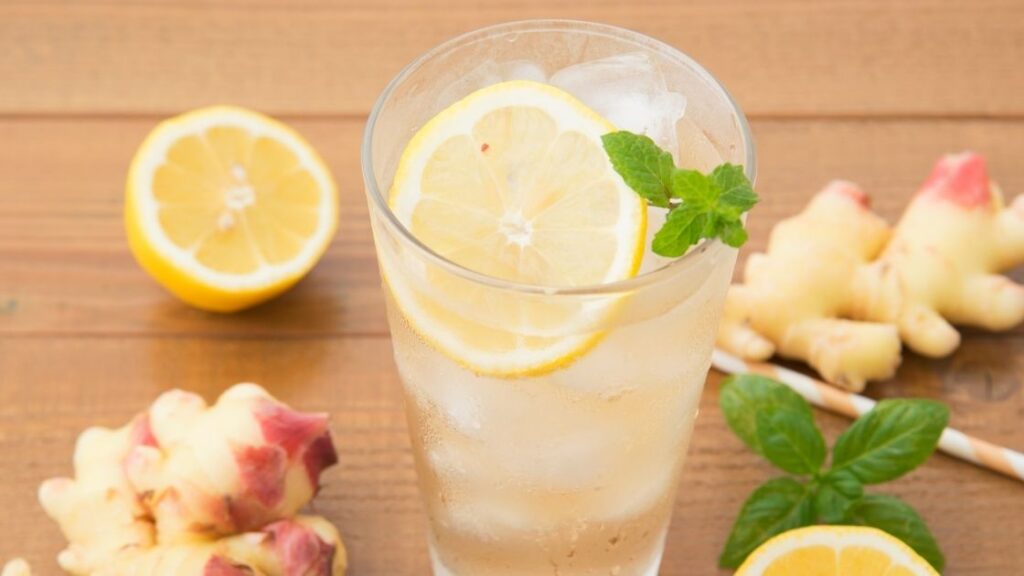 However, I wondered what the differences are between them, and here’s what I found…

Instead of lime, Q Ginger Beer has rose oil. But, all of the other ingredients are identical.

Q Ginger Beer is also sweeter than Q Ginger Ale and it has about 25% more sugar.

Here’s a table that shows the ingredients side by side:

And here’s a side by side table showing the difference in the amount of sugar.

As a result, it has a slightly sweeter taste.

In my experience, a ginger ale you buy from other brands such as Schweppes isn’t as sweet as a ginger beer.

And oftentimes a ginger beer can have a more gingery taste.

What Is Q Ginger Beer? 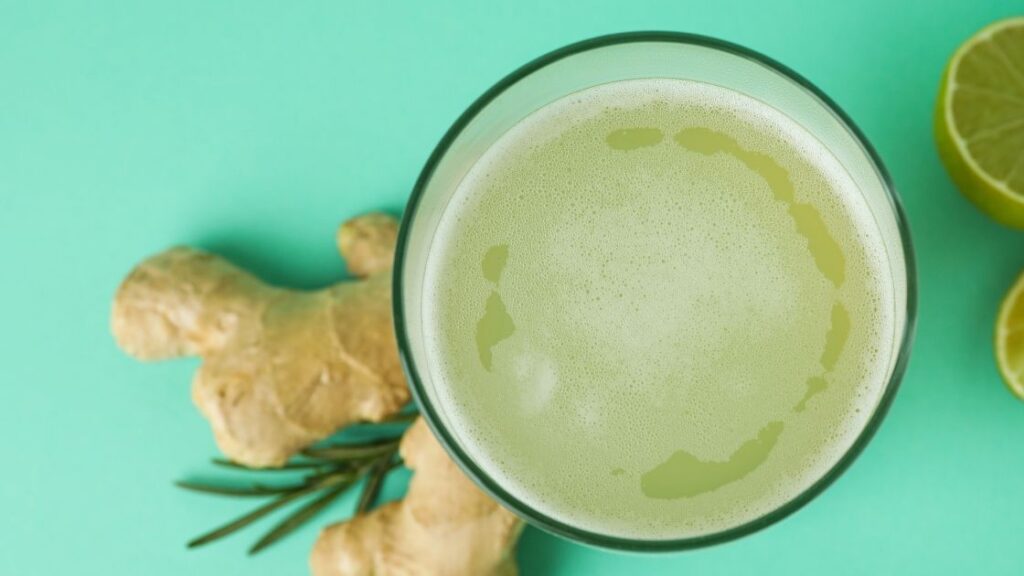 There are many different brands of ginger beer. But, what sets Q Ginger Beer apart, and how exactly did it come to be. Here’s a quick summary:

It is made to be used as a mixer.

Q Mixers says that their ginger beer is made to be less sweet so that the flavor doesn’t overpower a mixed drink.

Q Mixers say that a ginger beer that is sweeter is meant to be consumed as a soda, rather than be used as a mixer.

That’s something I’ve never heard of before, however, I don’t really drink a lot of mixers.

Some sources online suggest that a spicier less sweet ginger beer is more versatile and can be used with a wider range of spirits.

If you’re an expert on mixers please let me know in the comments, and I’ll update the article.

However, this is the major difference between Q Ginger Beer and the reason you will find it in the mixer aisle of your supermarket. 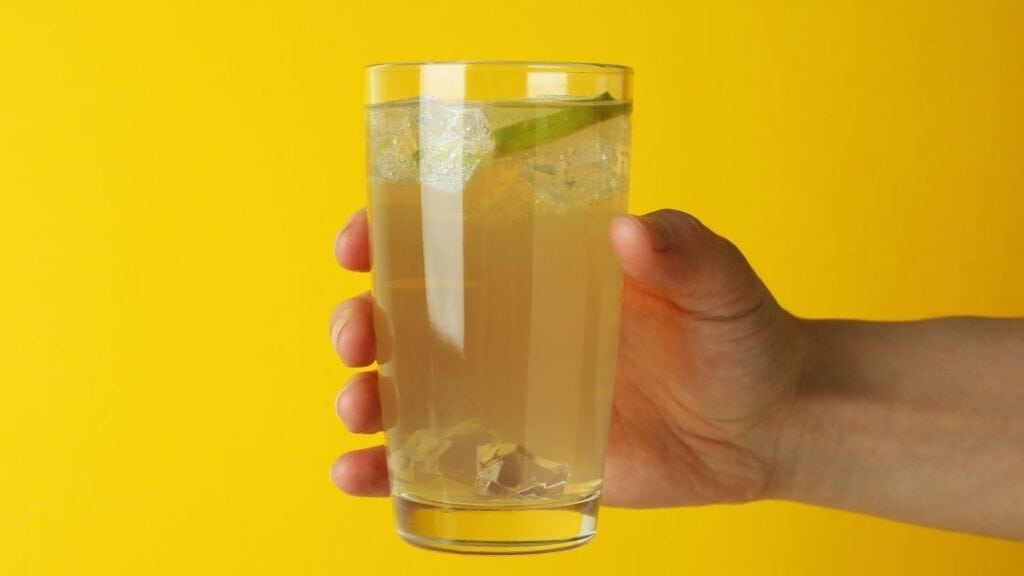 So, if I had to rate Q Ginger Beer, what would I give it out of 5? How about other people who have tried. Well, here’s an overview of whether Q Ginger Beer is good or not…

As a whole Q Ginger Beer is good.

It isn’t an acquired taste like some other sodas such as root beer.

And compared to other ginger beer it tastes very similar.

The major difference is that it isn’t as sweet as other ginger beers.

If I had to choose between Q Ginger Beer and one of the most popular ginger beers – Bundaberg, I would definitely choose Bundaberg.

But, Q Ginger Beer is designed to not be as sweet and isn’t meant to be drunk on its own.

Instead, it’s supposed to be used as a mixer.

Some spirits that go well with ginger beer are:

One of the most well-known premade ginger drinks is Canadian Club and dry.

Or, affectionately called CC and dry.

Which is a mixture of ginger ale and whiskey and goes really good with lemon or lime.

Where can you buy Q Ginger Ale and Q Ginger Beer? 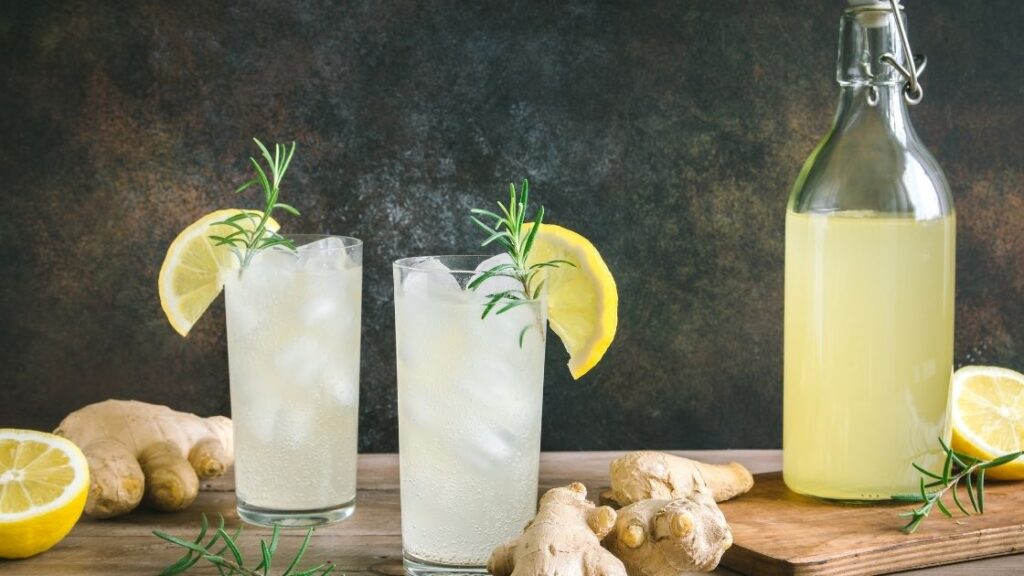 So, you’d like to get your hands on some Q Ginger Ale or Q Ginger Beer. Here’s where you can get it…

As a general rule, Q Ginger Ale and Q Ginger Beer are available online on Amazon, Walmart, and at most large grocery stores.

Certain companies own a warehouse and will have a website that they use to receive payments.

They then deliver it to your address.

But, to get it immediately your nearest medium-sized to the large grocery store should have it.

It appears to be widely available throughout the USA and Canada for a good price, however, internationally such as in Australia, and New Zealand it’s hard to get and generally a lot more expensive.

What Ginger Ale is owned by Coca Cola? 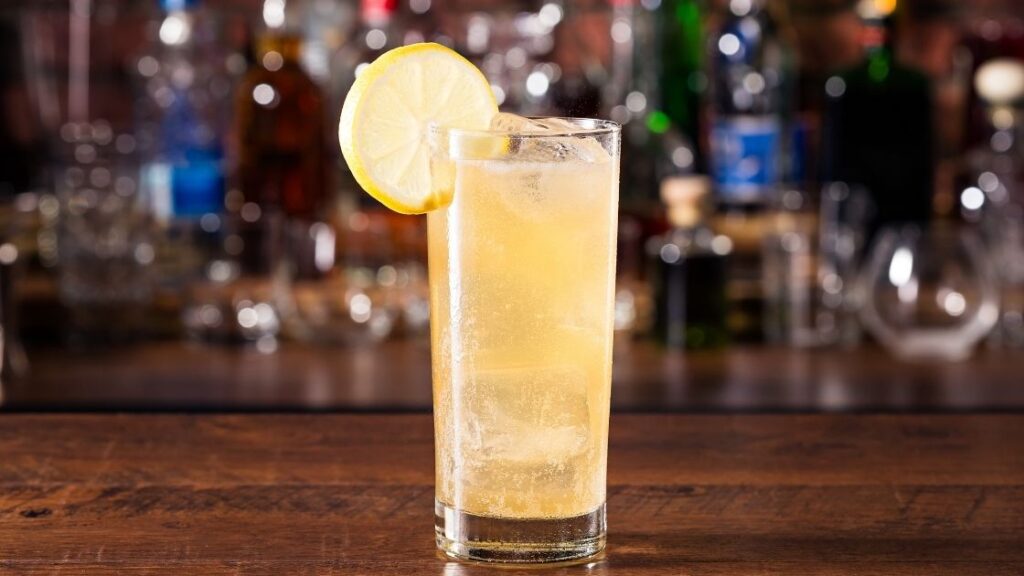 Coca Cola is the largest seller of sodas in the USA and sells more than double that of the next biggest companies Pepsi, and Keurig Dr. Pepper.

However, I was wondering if they make ginger ale?

The Schweppes brand has a few different sodas such as lemonade, and tonic water.

Coca Cola also makes a ginger beer in the continent of Africa which is called Stoney Ginger Beer.

Interestingly, it’s common for soda companies such as Coca Cola, Pepsi, and Keurig Dr Pepper to all produce the same soda.

Depending on where different bottling plants are around a country, and the demand for a soda at the time it can make sense for a soda brand like Schweppes to partner with more than one company to produce their sodas.

Does Schweppes have real ginger? 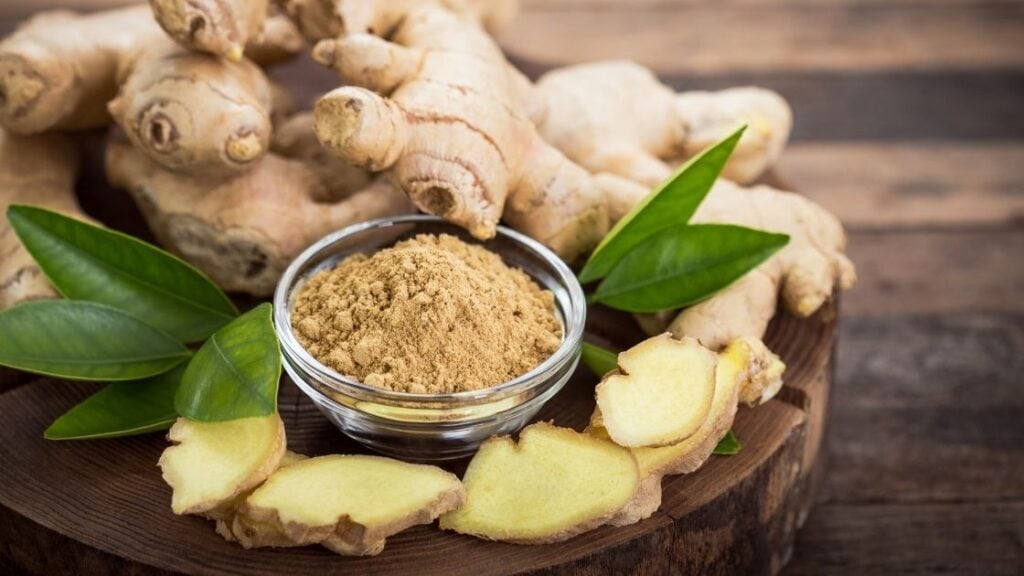 Some ginger ales, and ginger beers will use real ginger extract, whereas, others will use artificial ginger flavor.

But, does Schweppes have real ginger?

Schweppes do not say whether they use real ginger.

On their label, they only state that they use ‘flavoring’.

Schweppes ginger ale has a ginger taste to it that tastes like real ginger.

However, Schweppes does not divulge this information.

It’s typical for sodas made by Coca Cola and Pepsi to not provide a list of the exact flavors they use.

And makes sense because otherwise, it would be easier for competitors to copy their recipes.