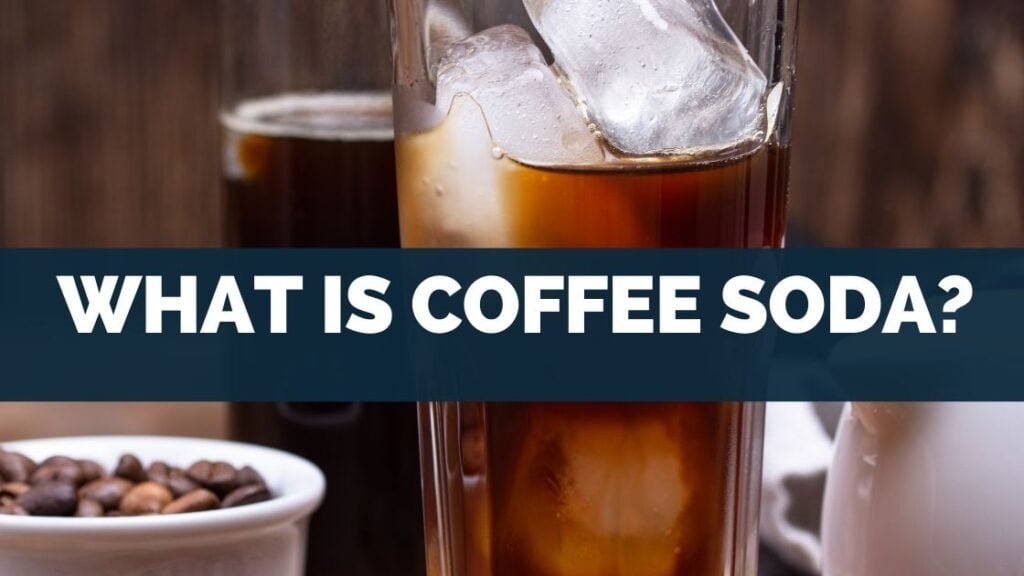 Coffee is great on its own, and soda is a refreshing drink. But, do they go together and what is coffee soda…

As a general rule, coffee soda is a mixture of coffee and soda such as Coca Cola or Sprite.

First, the coffee is brewed and then it’s mixed with soda.

Oftentimes, syrups such as hazelnut are added and are made by soaking hazelnuts or other plants in water and then adding sugar.

You can use any flavors you like for example, lavender, rose, or citrus.

They go really well with soda and coffee and so make a great overall drink.

In this article, I will explain what Coke coffee is, whether coffee soda is good, whether it’s good for you, and whether the amount of caffeine is different.

What Is Coke Coffee? 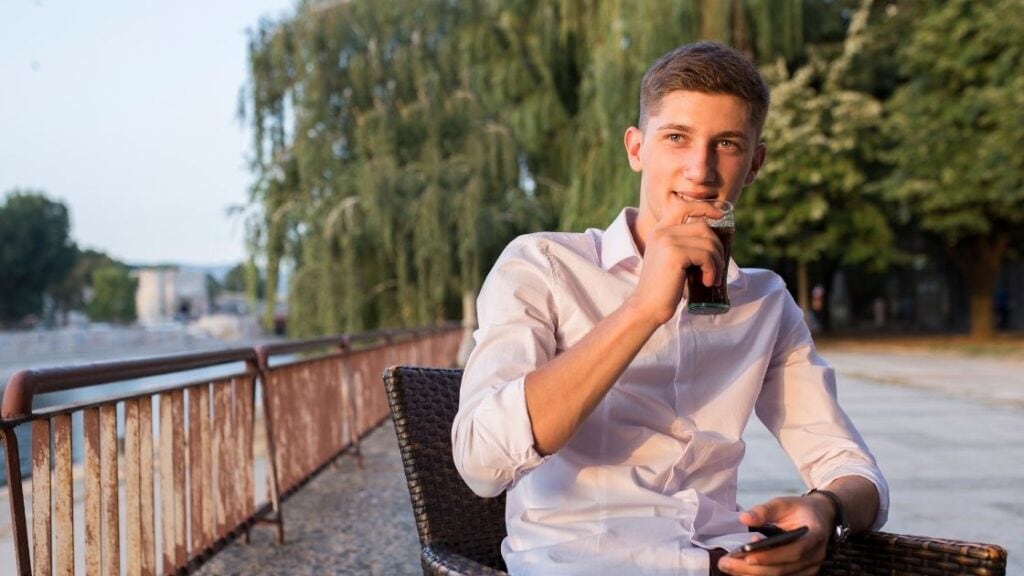 Coca Cola brings out sodas for a limited time and I recently saw Coke coffee.

I wasn’t exactly sure what it was so I did some research and here’s what I found.

Before that, it was released on trial for a limited time in different regions and countries.

It is almost identical to drinking a Coca Cola except for coffee aftertaste.

Soda companies like Coca Cola release unique flavors from time to time to see what their customers like the most.

For example, you may remember Lemon Coke.

And has a taste similar to a Coke float. In my opinion, a coffee soda tastes much better than a Coke coffee.

But, there is something unique about the taste of Coke so it also makes one of the best colas to use in a homemade coffee soda. 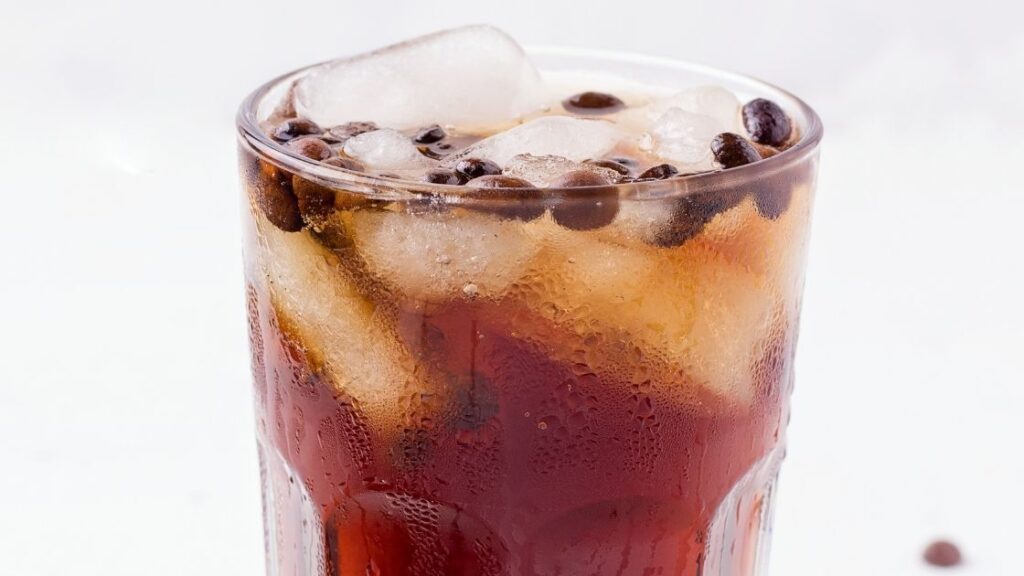 If you’ve never tried coffee soda before you’re in for a unique experience.

The flavors blend together really nicely.

Sort of like how chocolate and coffee naturally go together.

Especially, when you adjust the recipe to make your own unique coffee soda.

It involves brewing some coffee, pouring it into a glass, and adding your favorite soda.

Syrups are also excellent in a coffee soda.

You may also choose to make a coffee soda out of cold brew coffee.

Cold brew coffee is made by soaking ground coffee in water overnight.

It has a less bitter flavor and brings out the flavors in the coffee more than coffee made with boiling water or steam.

However, the process takes a lot longer and the coffee has to be left overnight.

There is an added advantage though in that the coffee is already cold, so you don’t need to wait for the coffee to cool down.

There is a range of different things you can add to a coffee soda to change the way it tastes.

For example, you can use Sprite, or Dr Pepper as the soda in your coffee soda.

The sky’s the limit when it comes to creating different variations of coffee soda.

Is Coffee or Soda Worse for You? 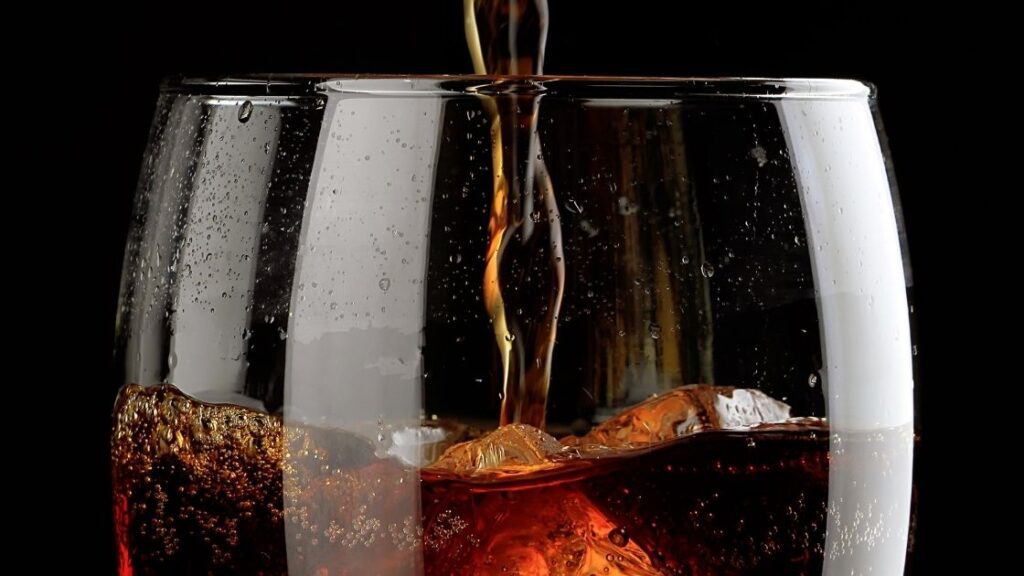 Soda gets a bad wrap as being bad for you, and some people wonder about the amount of caffeine in coffee.

But, overall which is worse for you: coffee or soda?

On average, soda is worse for you because it contains sugar.

You can drink more coffee than soda in a day. 1 cup of soda on average contains your daily sugar intake limit.

But, you can drink around 3 cups of coffee before you reach your daily caffeine limit.

Therefore, because you can drink more coffee than soda, soda is worse for you.

However, as long as you don’t drink too much soda or coffee overall it won’t have any measurable effect on your body.

Is Caffeine in Soda Different Than Coffee? 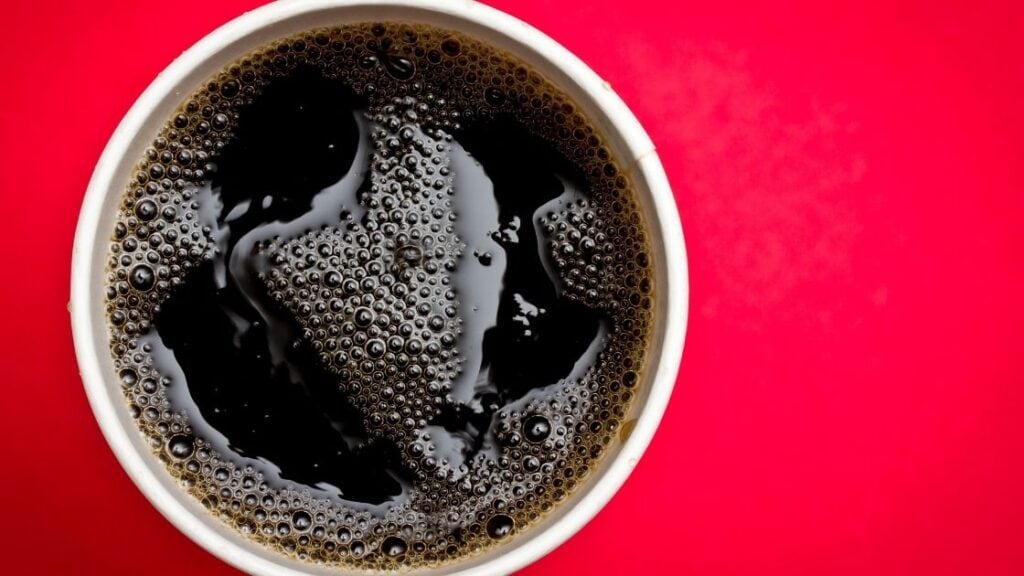 Caffeine gives me more focus and energy, and I love how coffee wakes me up in the morning.

Caffeine in soda is identical to caffeine in coffee.

Caffeine is a chemical compound with the formula C8H10N4O2 .

Therefore, it is the same no matter where it’s found.

Caffeine naturally occurs in many different plants where it is often extracted to be used in sodas.

Some people claim that it can also be created in a lab.

However, it isn’t clear whether this is done or not.

And due to the abundance of caffeine-bearing plants, and the ease with which it can be extracted, in my opinion, it isn’t likely that sodas use synthetic caffeine.

Caffeine found in coffee is naturally occurring, and companies that grind and sell coffee such as Starbucks do not add additional caffeine to it.

How they extract caffeine to add it

Starbucks and other coffee roasters DO also offer a decaffeinated version of coffee where the caffeine is taken out. This is done by soaking the beans in water, which extracts the caffeine.

After that, they dry the beans again (source: link).

This is the same process that happens when you make a coffee using a coffee machine or a French press.

The left of overground coffee has most of the caffeine taken out.

However, the major difference is that the beans aren’t roasted first, and instead it’s decaffeinated when the coffee beans are still green.

Can Coffee Be Carbonated? 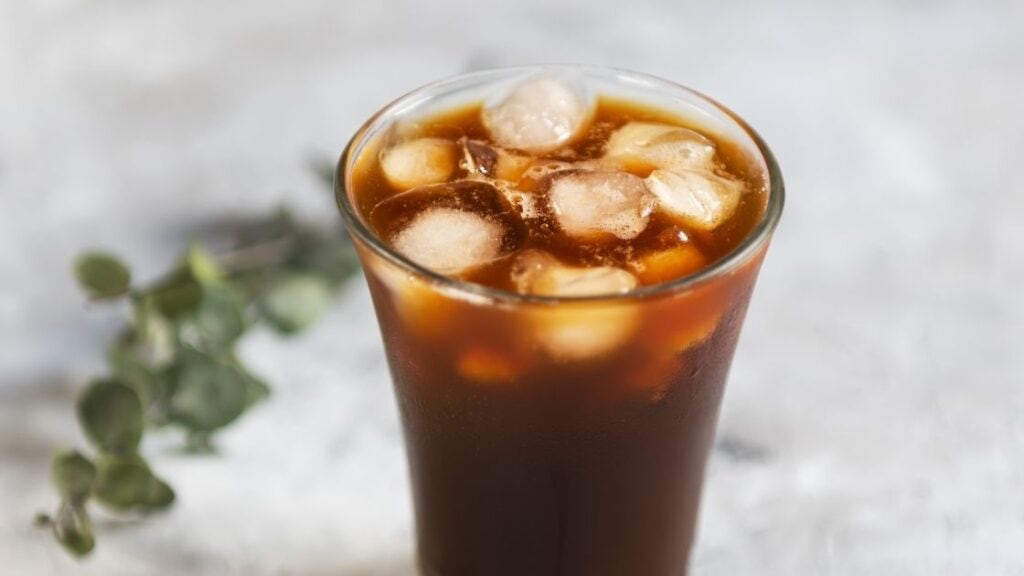 Sodas, beers, and some wines are carbonated. However, is it possible to carbonate coffee?

As a whole coffee can be carbonated.

It can be pumped full of CO2 using a soda siphon.

There is also what’s called nitro coffee which is a fizzy coffee made with nitrogen gas rather than carbon dioxide.

Nitro coffee has a very pleasant taste and tastes creamy and sweet without sugar.

However, with a nitro coffee, no acid forms, and the coffee keeps its same flavor.

Interestingly, nitro coffee is made the same way that you would make carbonated coffee.

And you can use a soda siphon also called a cream whipper or whipping siphon.

For the best flavored carbonated coffee though, it’s recommended to use cold brew because it has a better flavor than coffee made using boiling water.

Read it – can you make nitro coffee at home. 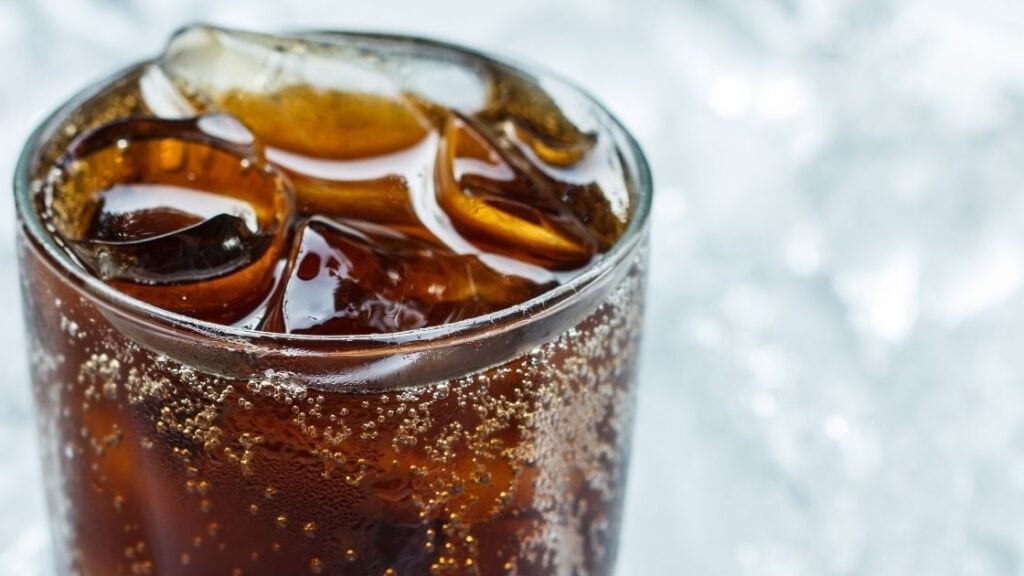 Coke coffee is a unique soda and coffee sodas aren’t that common. Coffee on it’s own isn’t generally carbonated so is Coke coffee carbonated?

It tastes almost identical to Coca Cola classic and has the same amount of fizz.

The one major difference is that it has a coffee after taste.

The flavor profile of cola and coffee naturally go together.

Is Coffee Soda A Thing? 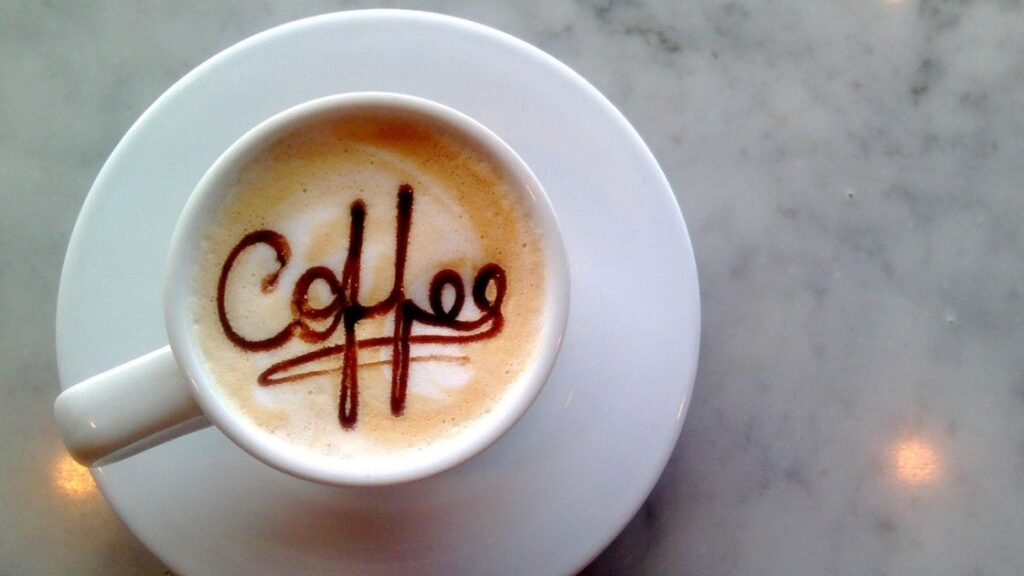 Previous to coming across Coke coffee I wasn’t aware that there was such a thing as coffee soda.

So, how popular is coffee soda really?

As a general rule, coffee soda is quite rare and very few people know about it.

However, those that do try find it tastes good.

There are a large number of recipes from people online and videos of people making it.

However, it’s a specialized drink that is rarely sold at bars and restaurants.

There are a few brands that sell it for example, S. Pellegrino and Manhattan Special.

But, for the most part it is nowhere nearly as widespread or made by as many brands as a cola, or a lemonade.

Can you make coffee with soda water? 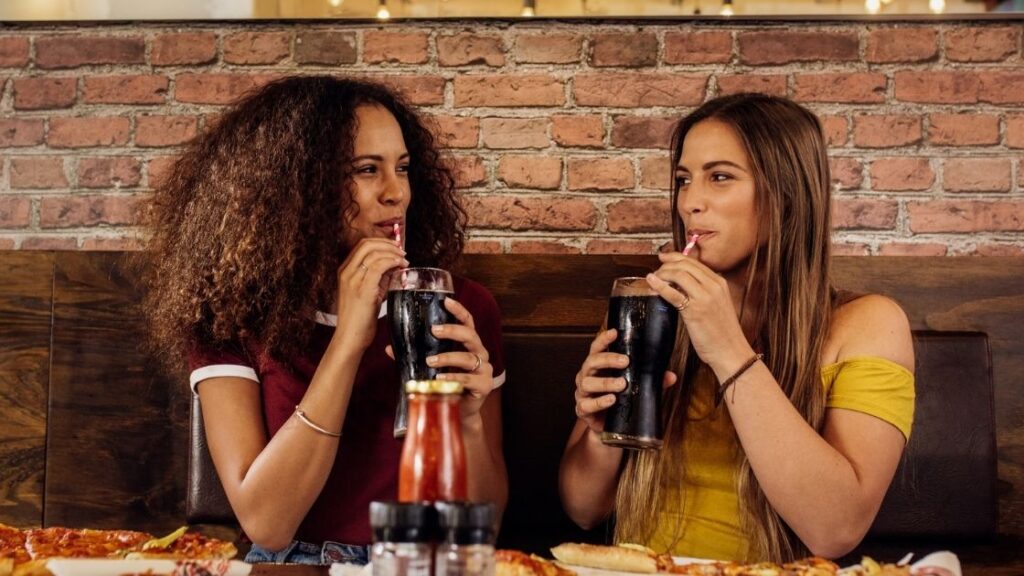 A coffee soda is made using a soda like Coke or Sprite. However, can you make coffee using soda water?

Generally, you can make coffee with soda water, however it has an unpleasant taste.

You can make it by boiling soda water in a saucepan or heating it in the microwave, and then pouring it over ground coffee.

Either with a French press or through a paper coffee filter.

The bitterness of soda water gives a bad taste to the coffee, and you probably won’t like it if you try it.

But, you could make the same thing by heating Coca Cola which could be interesting.

I don’t see how it would be different from a coffee soda.

Another option is to make the coffee soda first and then heat it in a saucepan.

The main thing is to only heat it until it’s hot and not to cook it as the sugar in the soda will begin to caramelize and can turn the soda a dark brown color.