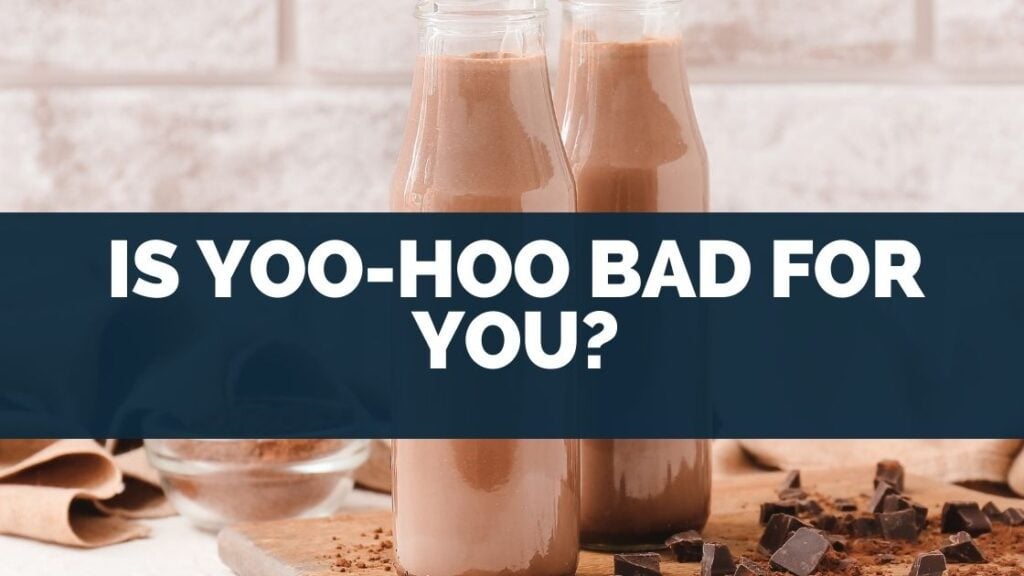 Yoo-hoo may have been a firm favorite of your childhood.

When you were younger, you may have loved chocolate milk’s taste.

You may have drunk this chocolate milk happily without a thought about how healthy it was. Chocolate lovers enjoy this drink.

Despite a lawsuit claiming that the drink is unhealthy, chocolate Yoo-hoo is a healthy, 99 percent fat-free drink with tiny amounts of hydrogenated oil used in the production.

However, the high amounts of Fructose Corn Syrup, around 16 grams per 6.5 ounces, may deter you from picking up a bottle and taking a drink.

So, is this a drink you should be reaching for? Or is it something that you should avoid?

But first, let’s have a look further at chocolate Yoo-hoo

Is Yoo-hoo Healthier Than Chocolate Milk? 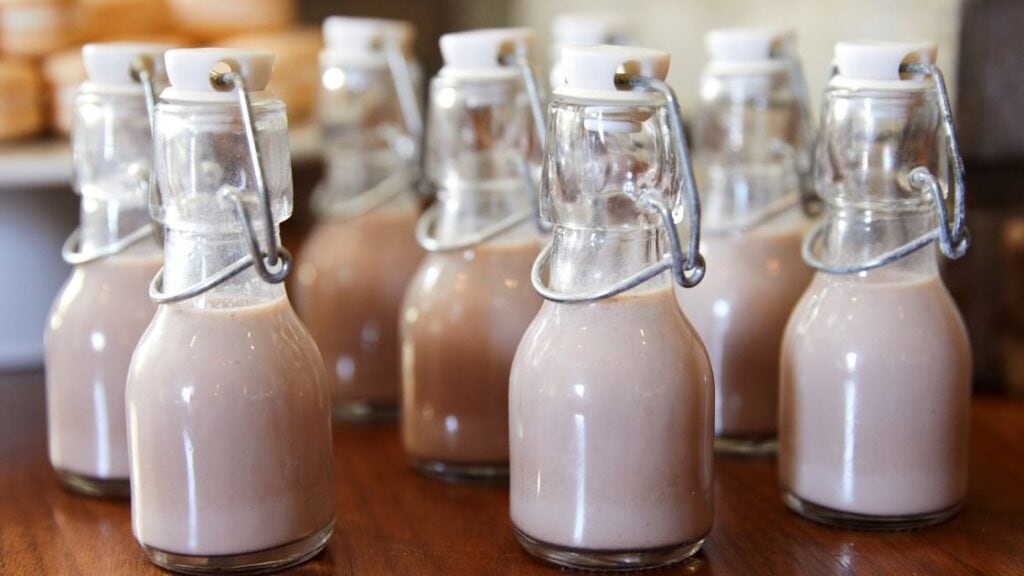 Both Yoo-hoo and Chocolate milk are chocolate beverages on the market today.

They are, at first glance, very similar beverages in terms of how healthy they may be.

Both Yoo-Hoo Chocolate Drink and chocolate milk are chocolate with similar serving sizes.

Still, looking deeper into the nutritional information, we find some stark differences.

When you compare the two beverages, you see that one is healthier than the other, with Yoo-hoo having fewer calories and fats than milk.

Yoo-hoo can be consumed as part of a healthy diet.

It is a trendy drink that has various health benefits.

However, looking at deep nostalgia, we see that milk, though having more fat and calories per serving than Yoo-hoo, also provides more nutrients and minerals than Yoo-hoo.

Of course, the sugar content in Chocolate Milk and Yoo-hoo is also something you must consider when buying a chocolate drink.

Too many grams of sugar in your diet can lead to health issues; an example of an issue that can arise is weight gain.

Still, in moderation, it is perfectly safe to drink.

If you are worried about how much Yoo-hoo you are consuming and how much you drink, impose a limit.

This way, you can still enjoy the chocolatey taste and not be concerned about your health.

But you may be unsure whether Yoo-hoo is a milk drink or something different.

Some people may have even suggested that Yoo-hoo is just chocolate water.

Can this be the case for Yoo-hoo? 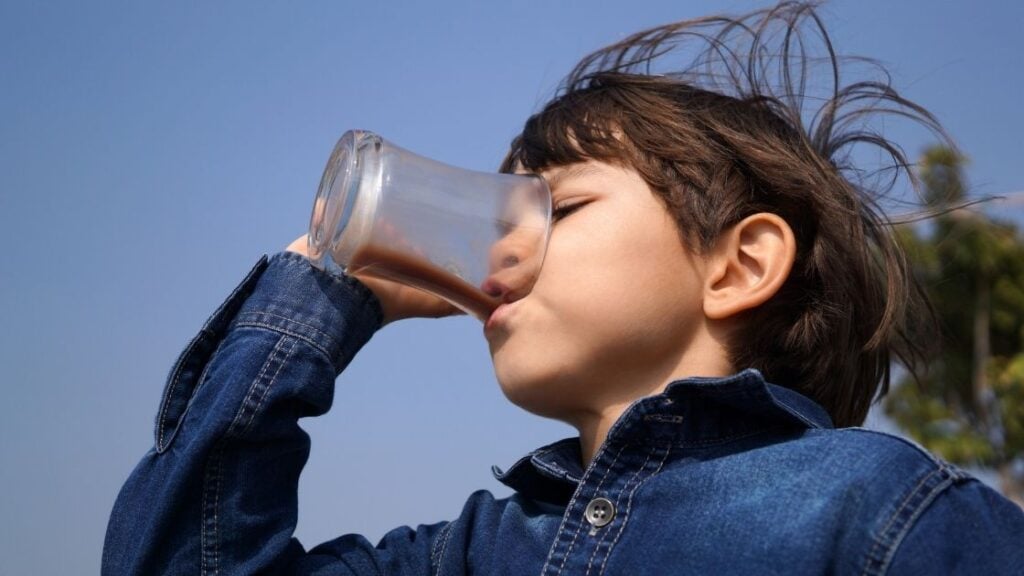 Even though Yoo-hoo looks like a milk drink, it is a drink consisting of a central combination of water, other products, and flavorings.

Thus, Yoo-hoo can be called “milk chocolate water,” but a chocolate drink is more appropriate as it is a product that serves as an in-between.

Still, even though Yoo-hoo contains no liquid milk, it doesn’t mean that it contains zero dairy products in its recipe.

However, because the product is mainly water, the term ‘chocolate water’ may not be far off.

So, let’s have a look at the List Of Ingredients of chocolate drinks and see what makes up this popular beverage:

Whey is a product you get when you curdle milk, a natural by-product full of calcium, protein, and nutrients.

However, adding Whey may mean that those suffering from dairy issues, such as those who suffer from lactose intolerance, may not be able to consume Yoo-hoo safely.

It will be up to the individual to decide whether or not the tiny amount of Whey present in the drink will negatively affect them.

If you are unsure, it would be wise to either avoid it entirely or try a small amount.

People often have questions about products and are unsure about the ingredients or what is involved in making their food and drinks, one of which is caffeine.

Does Yoo-hoo Have Caffeine? 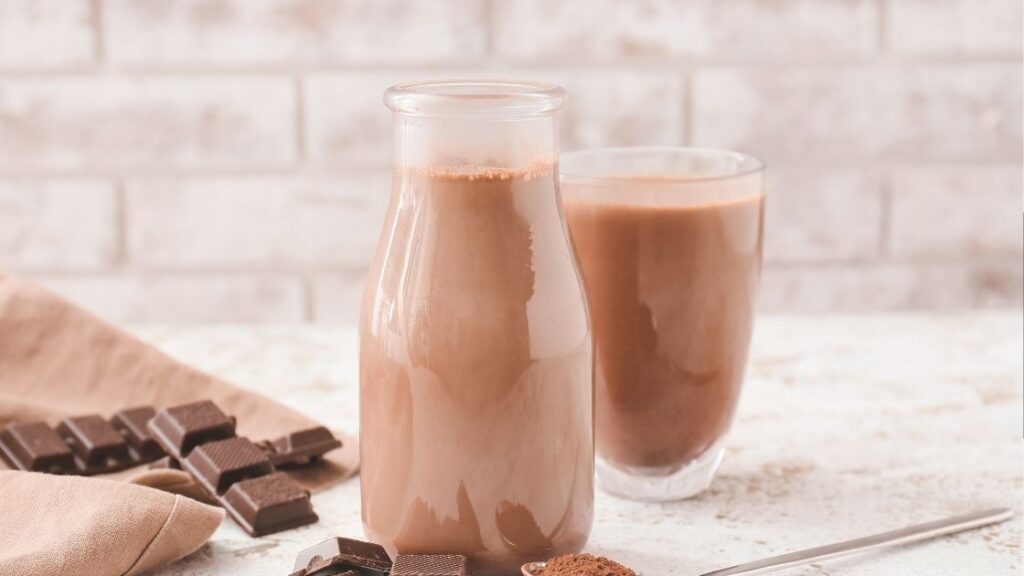 An average serving of Yoo-hoo contains no caffeine in portion.

Thus, Yoo-hoo is caffeine-free and safe to consume, perfect for anyone worried about too much caffeine or those with a caffeine allergy and oral health.

Yoo-hoo containing zero caffeine, is the perfect treat for children, who should limit the amount of caffeine in their diet to as little as possible.

The recommended daily intake of caffeine is about 400 milligrams for healthy adults, which appears safe for the most part.

This amount can be found in around four cups of coffee or ten cans of cola.

This limit is less for children and teenagers, who should only consume around 100 milligrams of caffeine daily, around one cup of coffee or three colas.

The benefit of Yoo-hoo being caffeine-free is that children can enjoy this drink without fear consuming too much caffeine in one day.

However, all you need to consider is keeping an eye on the sugar consumed by these drinks.

Is Yoo-hoo a Nesquik? 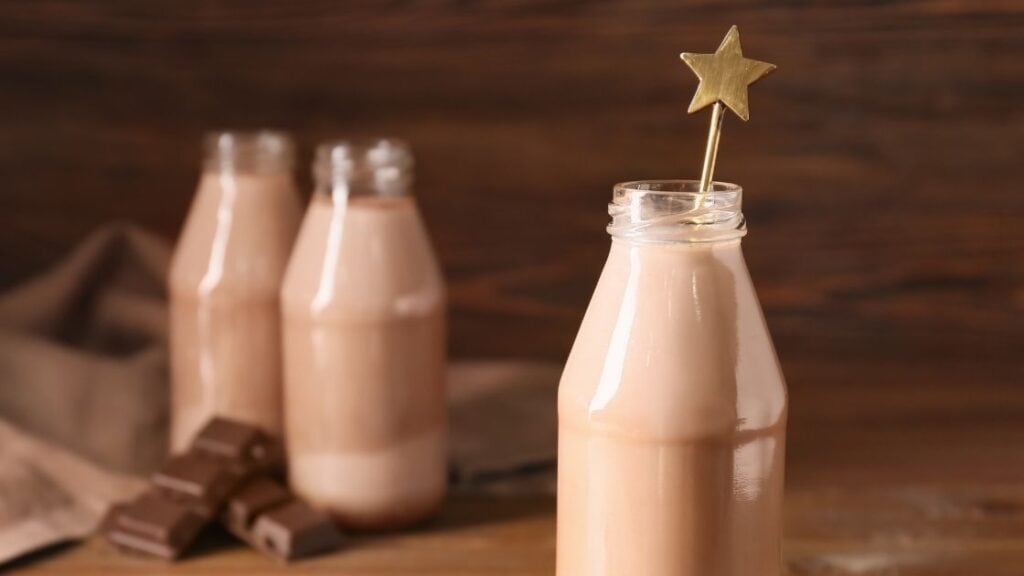 Yoo-hoo is very similar to Nesquik in their target market; they are very different types of drinks.

Nesquik is a milk-based drink and offers different tastes, textures, and nutrients than Yoo-hoo.

One of the more significant differences between the drinks is that the two companies own them.

Yoo-hoo was invented in New Jersey in the 1920s.

The inventor, Natale Olivieri, created this beverage while a grocery store owner.

He used his wife’s techniques to preserve the new product.

The company has had many different owners throughout the years, ending in the current owners taking possession of the brand. Currently, Yoo-hoo is owned by Keurig Dr. Pepper.

Nesquik is a company that Nestle owns.

Released in 1948, Nesquik Quik was introduced into America’s public sphere as a chocolate-flavored milk drink, later introduced as Nesquik in Europe.

Nestle has never owned Yoo-hoo in its history, so the similarities between the two products are all in the consumption and the ingredients.

For each company, the market is constantly changing. So you can have new consumers look at the product you are selling.

But can everyone enjoy Yoo-hoo? 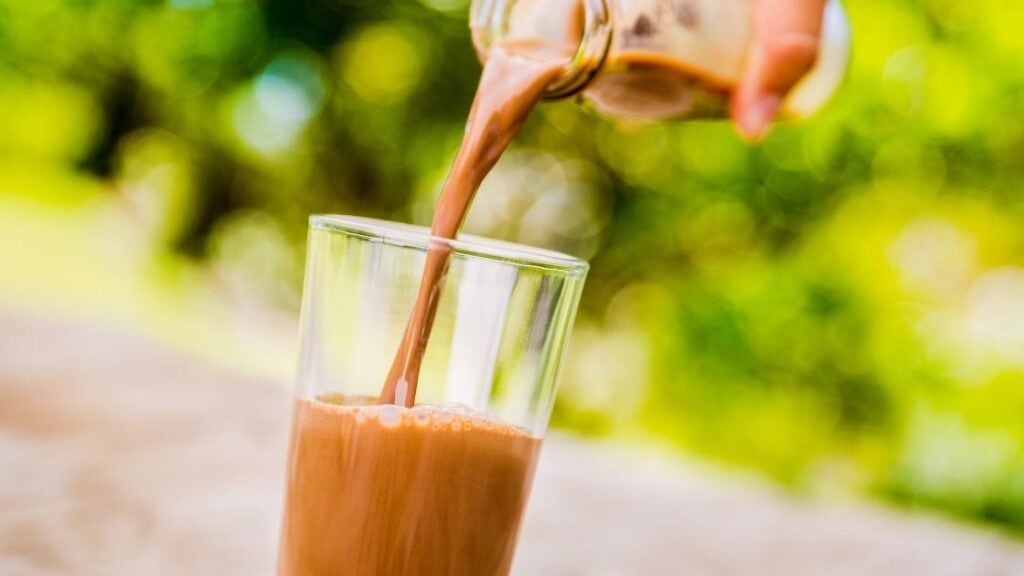 Unfortunately, Yoo-hoo is a non-vegan product, but it can be drunk by vegetarians.

Now, while not containing milk or any dairy, Yoo-hoo still contains milk products.

The main ingredient that stops all of you lovely vegans from enjoying some chocolate goodness is Whey.

This protein is formed during the making of milk.

Another reason why Yoo-hoo isn’t suitable for vegans is that the product contains many non-vegan vitamins.

The vitamin in question is vitamin D3, a source of vitamins from the wax of an animal’s wool.

This wax is formed when the sun’s radiation hits the surface of the wool.

The animal then produces wax, like sunscreen for us, collected and used in some products.

PETA unsurprisingly deem it to be of animal origin and, therefore, non-vegan.

But what if you want your chocolate fixed?

Then the good news is that many vegan chocolate drinks have delicious flavors and are plant-based.

Have a look in your local shop to see if there is one you can consume.

Yoo-hoo is still a trendy drink all over American chocolate drink and has become a public icon since its introduction.

You are likely to find someone who may have an opinion on whether or not they liked it as a child or stayed well away.

But, being something of an icon can lead to bad press from members of the public, especially regarding how healthy a product is for people.

With all products that are considered treats, the key is moderation. Any item of food taken in excessive amounts can be harmful to health.

However, Yoo-hoo is only one of many products that can be enjoyed as part of a healthy and balanced diet.

Yoo-hoo can be a wonderful and refreshing summertime popular drink or a treat for your children when drunk correctly. Yoo-hoo is a Delicious chocolate beverage that does not affect your health.